As previously announced, Czech Games Edition will be releasing a new updated version of Tash Kalar with higher-quality cardboard, upgraded graphic design for all of the cardboard components and both the task and flare cards. Last week they released more details and images, on their website, for those eagerly waiting fans of Mr. Chvátil’s abstract winner. For those who already shelled out for the first edition, an upgrade pack will be available to make your old boring version pretty again. This upgrade pack will be available in Essen, as well as the new edition of the base game and the Everfrost expansion. Perhaps the most exciting news announced is the new price point. Often criticized for the lack of filling in its original $60 box, CGE has heard your cry. The new edition of base game will cost 25 EUR at Essen. The Upgrade pack that contains all the cardboard and the changed cards will be 5 EUR or free if you buy the Everfrost expansion deck for 10 EUR.

A new city in France 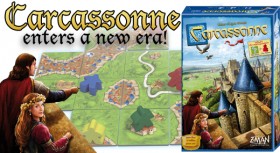 Carcassonne is a game that holds a special place in my heart, so obviously I was excited to see that Z-Man announced that it’s going to be publishing an edition with new artwork! As a Carcassonne completionist I am both excited and sad all at once. Thankfully, this new version will be compatible with the older version and expansions (yes, I’m looking at you new Pandemic). From Z-Man’s website:

Nearly 15 years after it’s original release, Carcassonne is back with an entire new look and luster. This new edition – nicknamed Carcassonne 2.0 – has been entirely redesigned, inside and out.

With new amazing cover art by our very own Chris Quilliams and beautifully designed tiles by Anne Pätzke, Carcassonne will appeal to newcomers and die-hard fans alike. Fear not, the back of the tiles remain the same, so this edition is fully compatible with previously released expansions.

This edition includes the River expansion as well as a new mini-expansion: The Abbot.

Z-Man Games also teased the expansion for their acclaimed pirate game, Merchants & Marauders, titled Seas of Glory. This big box expansion offers players 11 modules to combine how they please with the base game for a brand new swashbuckling experience. From their BoardGameGeek page:

Seas of Glory plunges you back into Merchants & Marauders where you can live the life of an influential merchant or a dreaded pirate in the Caribbean during the Golden Age of Piracy.

This hefty expansion offers a modular experience with eleven new challenges you can mix and match to constantly renew your search for glory at sea. With many new mechanisms such as changing winds, smuggling, and crew satisfaction as well as five variants, Merchants & Marauders will never be the same. Will your captain still gain eternal glory and immense wealth – or will he find his wet grave under the stormy surface of the Caribbean Sea? Only time will tell…

Look for Seas of Glory to sail onto shelves this fall! 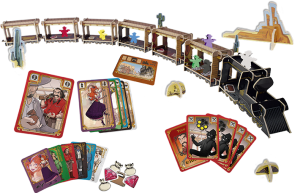 As mentioned in a prior BoardCast News post, I am desperately awaiting the arrival of Ludonaute’s Colt Express. This train romp has players taking on the role of bandits attempting to rob the innocent passengers aboard the Union Pacific Express. Using programmable movement, a gun and a 3D train, players will vie to rob the passengers of as much money as they can without being caught by the marshals or punched in the head by the other players. Ludonaute released a teaser trailer and website (with rules) for Colt Express last week. Even if the gameplay doesn’t interest you, be sure to check out the video to appreciate the cool 3D train! 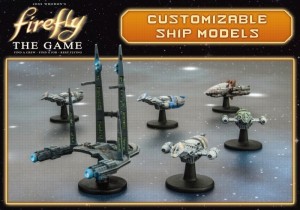 And last but not least my fellow Brown Coats, Gale Force 9 has released images of the new resin ships for their Firefly board game. These look awesome! The only thing that would make this better is if they had bases and you could fly them around in an X-Wing style game (I’m sure that’s in the works though).  The box of ships will contain 4 Firefly Class ships, 1 Reaver Cutter, and 1 Alliance Cruiser in high detail resin and ready for further customization if you wish. Look for your Firefly game to be upgraded in February 2015.