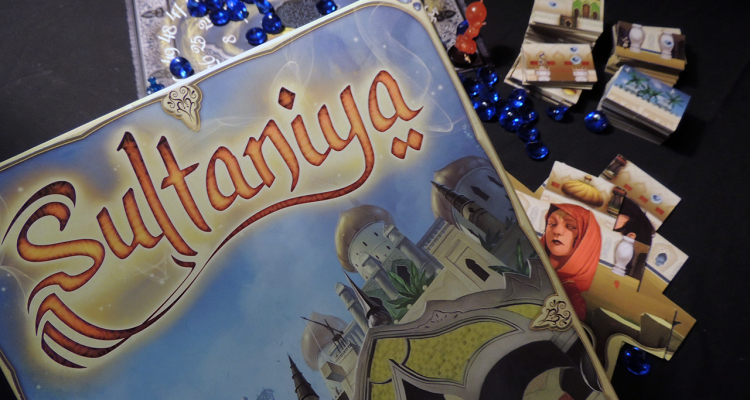 During the Arabian Nights, you take on the role of a prospective candidate vying for the respect and title of “Grand Vizier.” It will be no small task, however, as you attempt to build what must only be the most spectacular palace in all the land! Architecting with abandon, you can place cupolas, minarets, gates, guards, windows, and more. With careful placement and the help of a few tricks up your turban, you can make your palace stand out from all the rest. You can even hire a Djinn or two (you ain’t never had a friend like [them]) to assist you with this feat. 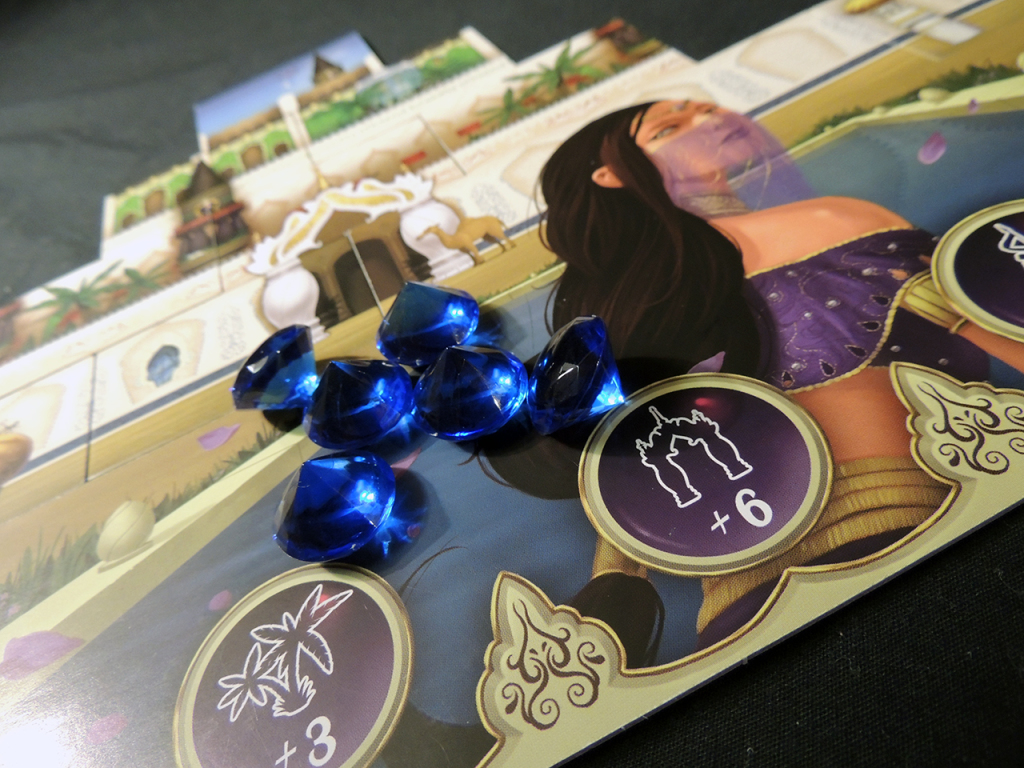 On opening the box, the first thing to catch your eye will probably be the spectacular blue, diamond cut sapphires; you’ll wish there was more of them to swim around in, Scrooge McDuck-style. Even more impressive are the highly detailed Djinn miniatures, which can find a home beside your player board throughout the game if you pay the price. The two-sided tiles and player character boards have great artwork on them, representing the array of character options and building features that can be included in your grand creation. Aside from a few miscut tiles and bowing player boards (easily corrected with some weight applied overnight), the overall quality of the components is quite high.

The player tokens and score track do seem to have been an afterthought, though. I would have liked to see a better representation of each character for the score track. Although the magic carpet artwork of the score track is an excellent thematic idea, the player tokens are sometimes hard to distinguish when scoring points, and having player miniatures on par with the Djinn would have been really cool. The rulebook does a decent job of outlining the rules, but it may still leave you with questions on some of the more situational nuances. (Thank goodness for the internet!) Having a Djinn “cheat sheet” for each player would have also been helpful, as opposed to needing to reference the rulebook repeatedly for the first few plays.

Each player first chooses a character from the eight available, and determines starting resources (some players will start the game with points and/or sapphires). Each board also displays the unique list of features that will score points for that player throughout the game. Additionally, players will receive two hidden objective cards, providing two more options for scoring points that are not public knowledge. You are now ready to get to building!

Each Djinn can be hired for varying amounts of sapphires to perform a different special action, and are then placed besides your player board. You may possess multiple Djinn, but you must pay their hiring cost each time you wish to take their action, and they may be hired away by other players. If you build any tiles with a Djinn that would normally award sapphire(s), that reward is nullified, but you’ll still score points as usual. 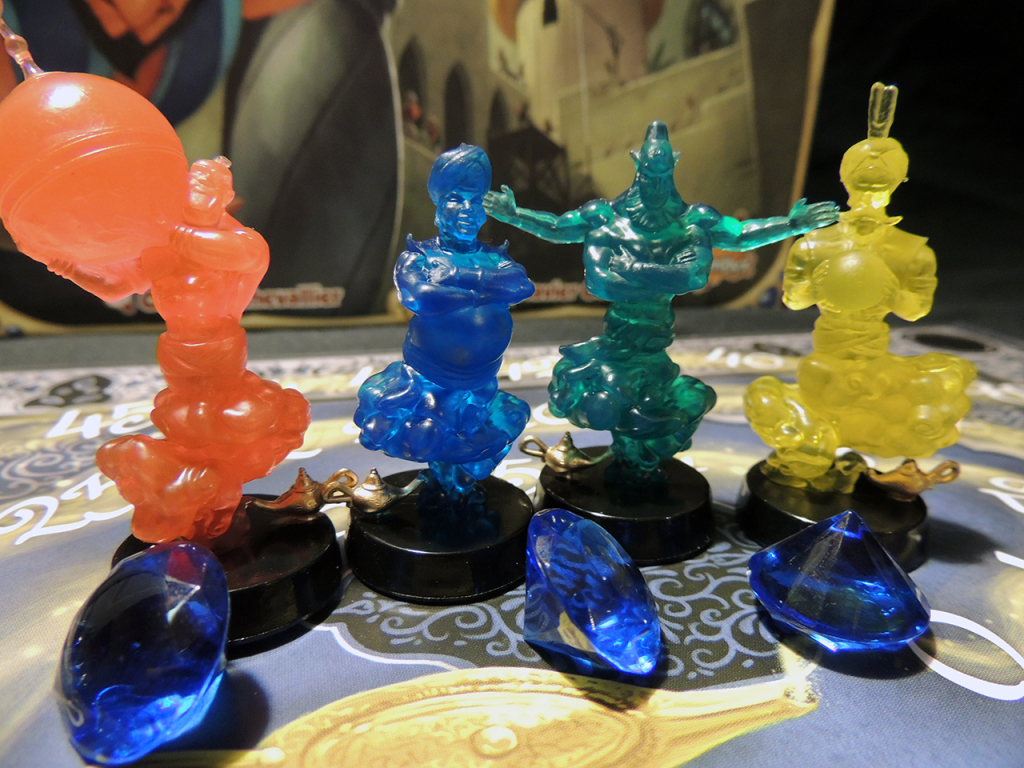 The endgame is triggered when someone builds their fifth roof tile, signifying one last turn for everyone. Each player then counts how many guards they have for the end-game bonus, and then reveals and scores their secret objectives, one-by-one. As I’m sure you have guessed by now, the player with the most points is declared the Grand Vizier.

Sultaniya is a midweight game that has the ease and simplicity of a lighter game in terms of style and teachability. The game itself is beautiful, and because the tile laying is dependent on how the pieces line up, it’s a title that really allows you to stop and appreciate the aesthetics. The tiles themselves are very detailed and contain little thematic easter eggs like a stray cats and camels (everyone thus far has asked how many points for the camel; sadly they are worth nothing, just thrown in for flavor). 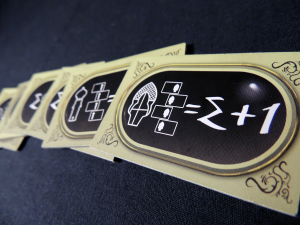 The game does require a good amount of strategy and thinking ahead; there have been a few games where one wrong build can have you calling on the red Djinn to rearrange much of your previous work. Careful forethought and placement can help you avoid this issue. After an initial play, you should be able to get a better grasp on how the tiles work and can use that skill to refine your tile placements and cash-in on more of your available objectives.

Speaking of which, since the secret objective tiles are handed out at random, it turns out that some of the objectives can end up contradicting each other. For example, you may get the objective where every two sapphires net you an extra point at the end of the game, and you may also end up with the objective where you receive two points for every Djinn in your control (which cost you sapphires to hire, remember) at the end. Needing to spend sapphires to hire the Djinn is counter-intuitive in this case, meaning opponents without this contradiction may fare better overall. You could, however, try to go after the bonus for the most guards in order to counteract this. We have also experimented with dealing out three objectives and discarding one, as well as a mini draft, and it seems to work just as well.

This game has hit the table almost every game night for us. We have gotten in multiple plays each time as well because we want to switch characters and try out different building objectives. If you enjoy puzzles, great artwork, Djinns and shiny, hypnotizing gems, then this is your game! 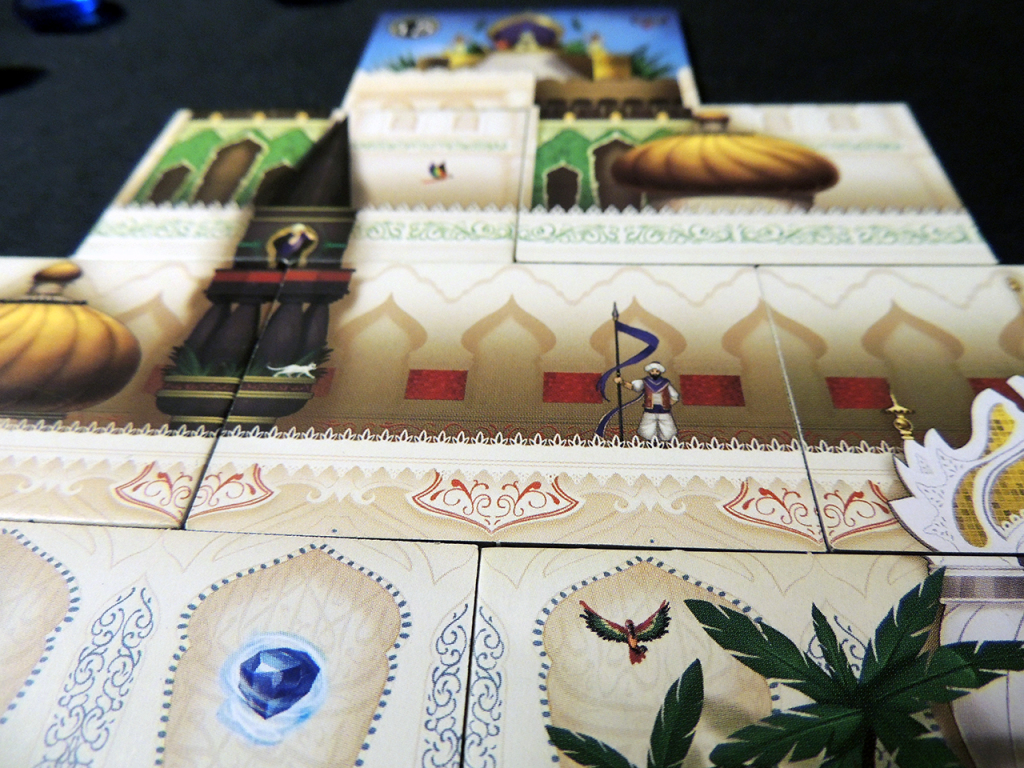 I picked this game up on a whim at my FLGS. They had one copy left and I kept finding myself coming back to it after browsing around for a bit. I decided to just bite the bullet and pick it up, and ended up being a great purchase. My wife and I have played this head-to-head many times as well as full 4-player game and each time it has been fun. The game scales very well since it contains tiles that allow you to expand the amount of building tiles according to player count. They also have balanced out the player boards to keep the game competitive. You will actually find yourself paying attention to your opponents and trying to block them from gaining any points on you by taking a tile you know they need.

The artwork in the game is fantastic, as well as the Djinn miniatures. The score track and tokens are a little lackluster but not too important in the end. I highly recommend this one if you want something in the medium-light range that can be easy for new gamers as well. This one will definitely be a hit for new players and you will find yourself playing it over and over.

I’ve always been a fan of tile-laying and ‘puzzle’ games, so Sultaniya was one that I was looking forward to the first time that I played it. I’ll forgive Steebin getting all mushy over the artwork and components as they are pretty top quality for a title of this sort. Experienced players may have an advantage over newbies in that knowing just what features you can expect in each individual floor of the palace is an important detail, but it shouldn’t be terribly unbalancing.

All in all, I’ll give Sultaniya a good thumbs up in the Tile-Laying category.

This game falls firmly in the “meh” category for me. The artwork and components are undoubtedly gorgeous. They draw in potential opponents in like bees to honey, but they also up the price point of the game to $50. The variable player powers provide some re-playability, but not quite enough to justify the expense in my opinion. I enjoyed the puzzle-like quality of the tile placement and the push-your-luck aspect of revealing tiles. Making the choice between focusing on my own strategy or blocking that of my opponents is always fun and interesting to me. On the whole, it’s a solid light-medium weight game, but not different enough from game to game to hold my interest past the third play.