The Trifecta of Awesome

To my extreme delight, Stronghold Games announced a trifecta of goodies for their critically acclaimed space age deckbuilder Core Worlds, from designer Andrew Parks.  First up, Core Worlds Digital a joint offering by Stronghold Games and BrokenMyth Studios will be launching a kickstarter in April 2014 to develop and release the digital adaptation of the game. Core Worlds Digital, which will be available first on the iOS platform, will include multiplayer support via Game Center, AI opponents, pass-and-play, tournament play, match play, in-game rewards, limited edition cards, and in-app purchases allowing deck customization. 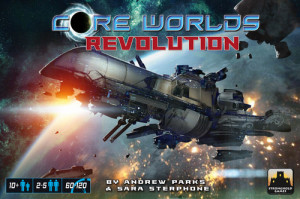 The release of Core Worlds Digital will directly correlate with the release of the base game’s second expansion Core Worlds: Revolution.  Players will build Advancements on their conquered Worlds, employ Heroic Tactics keyed to specific Heroes in a separate Heroic Deck adjacent to their regular draw decks, and take command of new Heroes.

After typing all of that, I find myself in need of a clean pair of shorts.  I make no secret of my love for Mr. Buonocore’s company and the outstanding product line on offer and once again he has exceeded my expectations. Core Worlds’ strong theme and streamlined mechanics continue to offer players a unique experience in a deckbuilding genre that has been flooded with lifeless titles.

With all of these amazing titles releasing this year, I think Stronghold Games is going to need to hire someone to help out (wink, wink, nudge, nudge).

Fantasy Flight Games (FFG) in the news?  No way!  Well friends, put those shocked faces away and gear up, literally, for a new expansion to Blood Bowl: Team Manager – The Card Game; Foul Play.  New in this expansion are the Putrid Player’s guild with three new teams, stadiums to grant extra rewards, new penalty cards, and a referee who will move from matchup to matchup “officiating” or more than likely just accepting bribes. Look for Foul Play to hit stores in the 3rd quarter of this year. For more information check out FFG’s website. 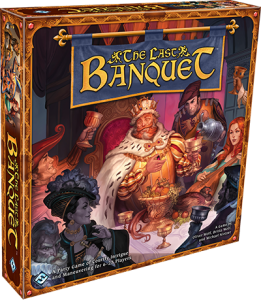 The Last Banquet is a large group team-based game for 6-25 where players take on the role of a member of the King’s Royal Court. Players will use the actions allowed to them by their role to accomplish their team’s agenda through teamwork, role playing and bluffing. I think played with the right group of people this title could be a huge hit. And for FFG to branch out from their “norm,” I am going to assume that they are also banqing on this one being a success.

Determined to have a game for every mode of transportation, AEG last week teased a new game from designer David Short called Planes.  In Planes, players will take on the role of a group of travelers pushing their way through traffic in the airport terminal in a desperate attempt to reach their plane before takeoff.  The other players, along with some neutral travelers may stand in your way but it is up to you to out maneuver them on your way to the ultimate victory – a seat on a cramped airline.  Sexy!  This one sounds unique for sure and I look forward to more updates on this.

Crash Games hits one out of the yard

Crash Games announced that they will be publishing YardMaster, the recent 2014 Ion Award winner.  YardMaster is a light strategy card game in which 2-4 players compete to build trains comprised of railcars with differing goods and values.  The BoardGameGeek site describes the game as follows: 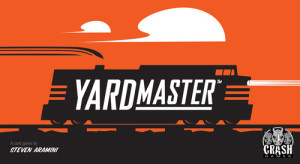 In Yardmaster 2-4 players compete to build trains comprised of rail cars of different goods and values. However, players are restricted in connecting railcars of only the same value or good type. By accessing their sorting yard, players can “bank” rail cars they can’t currently use in hopes that they may be able to on a later turn. The player to reach the set value first wins the game.

I have heard nothing but good things about this game and I am excited that Patrick & Co. will be releasing a Print & Play ahead of the late April 2014 Kickstarter campaign.  All aboard the Crash Games Express! 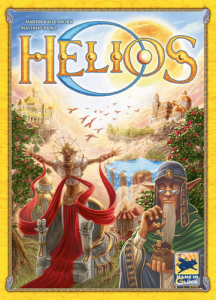 Everything Revolves Around the Sun

Z-Man games last week gave us a glimpse of their new upcoming release, Helios.  This Hans im Glück title has players taking on the role of high priests, gradually developing their civilizations by building their cities and temples under the watchful eye of the Sun God.  We will have to stay tuned for more information on this one.

In an attempt to win the Golden Geek Award for most-meta game, Ludicreations announced their newest project, from designer Harry-Pekka Kuusela, ESSEN: A euro-style board game about selling board games & exhibiting at a board game fair.

In ESSEN, which is going to be beautifully illustrated in pixel art, with a plethora of inside jokes and references for board gamers, you have to make decisions like any publisher has to make – about staffing, managing your money, creating buzz, and much more! Each player board is themed as being occupied by a certain type of game publisher (eurogames, ameritrash, wargames, RPGs), with reverse side showing even more types of games (abstract, children’s games, space 4X, LARPs) for even more variety.

Ludicreations looks to launch ESSEN on Kickstarter in April 2014.  Keep an eye out for our Kickstarter Spotlight on this as Im sure it will catch Smee’s eye. 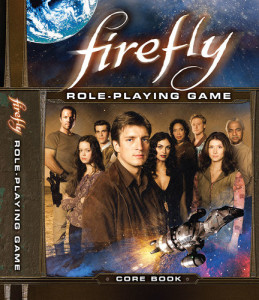 Can you Roleplay the Stegosaurus?

While technically not a board game (well, there is a board game but this is not it), I thought I would share with all you brown coats out there that the Firefly RPG Core Book, with Art Direction and Design by the awesome Daniel Solis, will be available in PDF format on April 2nd. The print version, which you can pre-order here, will be released later in the month.