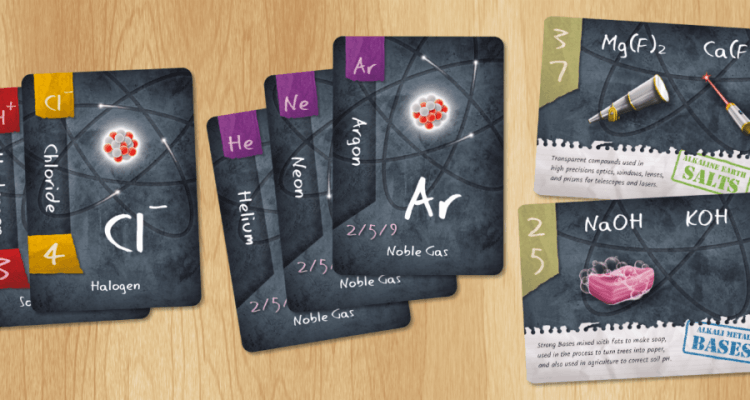 Ion is a card drafting game from John Coveyou and Genius Games (designer and publisher of Linkage: A DNA card game and Peptide: A protein building game) for 2-7 scientists. During the game, you are attempting to draft different element cards that will be matched with each other to create a variety of ionic compounds (anything from your basic table salt, sodium chloride, to some nasty hydrofluoric acid). Can you synthesize the best compounds to score more points than your fellow scientists?

The game is played over three rounds, and each round consists of three phases: setup, draft, and score. Before getting started, one important thing to note is that each round is its own individual game, and rounds do not build off of one another. During setup, the element cards are shuffled and four are flipped face up to the center of the table. Then, each player is dealt eight cards. The compound cards are also shuffled, with two flipped face up in the center of the table. These compound cards will indicate the compounds that, if completed, will score bonus points at the end of a round.

The drafting phase begins with players selecting one card from their hand and placing it face down in front of themselves. Once all players have selected a card, all players simultaneously reveal their choice and keep it in front of themselves. Cards are then passed clockwise. On subsequent turns, element cards can either be played alone (non-bonded) or placed onto another card (bonding those elements). Each element has a certain charge, either positive (+) or negative (-) with two elements having a charge of 2+. The goal is to bond elements that will produce a neutral compound, so a (+) element bonded to a (-) element or a (2+) element bonded with two individual (-) elements. Only neutral compounds will score at the end of each round. The only exception to this bonding is the noble gas element card. There are three different noble gas cards that are played alone and remain unbonded. Drafting will continue until the sixth card is drafted. The last two cards will be discarded.

During the drafting phase, each player has a set of three action tiles that can be played at any time during the game, but only once per game. These tiles are kept face up in front of each player until used. When a player chooses to use an action tile, they flip it over to reveal a negative value, which will count against their score at the end of the game. At the start of the game, these tiles are sorted by the letter on their backside and randomly given to each player. This is done because not all action tiles have the same negative value. However, they all add up to a total of -9. The three action tiles are as follows:

The scoring phase occurs at the end of each round, in three steps: First, all neutral compounds are scored. For each compound, check that the charges add up to 0 and add the point values for each card. Next, score any noble gas cards in play. You score 2/5/9 points for having 1/2/3 different noble gas cards (2 of the same card would score two points each). Finally, score compound cards. If you produced one of the two compounds on a card, score the lesser top number. If you produced both compounds on a given card, score the max value.

Once the round is scored, begin the next round. At the end of the third round, total up the scores from each of the three rounds and subtract the value from the used action tiles. The player with the most points wins.

Ion is a very quick and fun drafting card game. John and Genius Games focus their designs on games that are both fun and educational, which could be used in a classroom setting as well. I was pleasantly surprised at how much we learned while playing this game. During our first play, we found ourselves building compounds and asking, “Is this real? What is this?” and then jumping on our phones to figure out what it is and how it’s used. The game also keeps the tension of a drafting game where you have to decide if a specific card is still going to be there by the time it gets back to you. The stretch goals in the Kickstarter also offer new element and compound cards that will add some variety to the game.

The action tiles offer a nice way to mitigate the draft, but seem to be very risky. You have to balance the potential reward with the chance of flipping over anything from a -1 to a -5. Sometimes, it’s just not worth it. I found that if I was going to use it, I needed to make sure that it was going to net me a decent amount of points.

In the end, I gave this game a shot because I’m a scientist and, by extension, a science-geek. When I saw a game about science I had to try it. I’m happy to say that I enjoyed it and it’s a nice game to throw in while you are waiting on other people, for other games to finish up, or just while you decide on what you’re going to play next. I can’t wait to try this out with my kid sister and use it to teach her some chemistry!

Though not necessarily a chemistry-geek, I was interested in how Ion used chemical bonding as an avenue to innovate a simple drafting game along the lines of Sushi Go! or Fairy Tale. In that vein, Ion succeeds – it provides an enjoyably simplistic drafting experience that requires no prerequisite knowledge of the periodic table. Navigating the challenge of needing a stable compound to score introduces a risk/reward balance that feels fresh in this game. Ion is still about maximizing your points within each hand, but you’ll have to make some tough decisions early on that will largely define how the rest of the hand is played. Should you get caught in a bind, though, the action tiles are there to lean on, at a cost. While I appreciate the ability to risk a few points to get out of a jam, or try to squeeze a few extra points from a hand, the penalty often seemed too steep. I frequently found myself drafting dead cards; happily accepting zero points over risking a possible -5, just to likely break even in the end. Though this extra element (ha!) largely fell flat, we still had fun using Ion as a filler in between games or to kick off the night and we managed to have just as much fun learning about the chemistry at hand.

Being a former high school Chem-A-Thon competitor this game grabbed me immediately just with the theme. My interest was maintained when I learned that Ion was a neat little card drafting game with a puzzle element tied in via the goal of the balancing of your compounds. The inclusion of compound bonuses adds a little extra challenge to game play to encourage players to take risks on card draws that would be worth more points. As mentioned before, the action tiles are kind of hard to use because they have the potential to be such a huge risk, but they’re a really good option for those turns where the hands just aren’t working for you. If there was one thing I could add to his game, it would be an expansion that includes more elements and compound cards that you could mix in to change up the probabilities and combinations of elements.

The League of Nonsensical Gamers would like to thank John Coveyou and Genius Games for kindly providing us with a prototype of Ion for this preview.

Ion is currently funding over on Kickstarter. If this game piques your interest, head on over to the campaign page by May 6, 2015 to purchase your own copy. For $19 (shipping included within the U.S.), you will receive a copy of the game along with all of the stretch goals that have been attained.