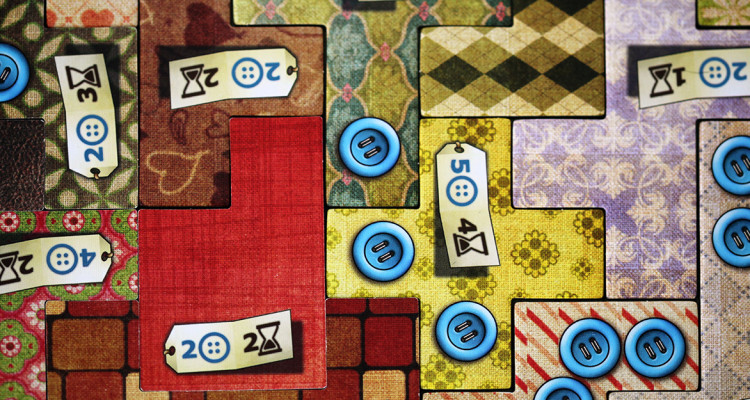 While I would normally start my review with a witty and thematic interpretation of the game at hand – giving you an idea of what you’re getting into and what kind of experience to expect – I have no such tale for Patchwork, a title from Uwe Rosenberg and Mayfair Games.

Patchwork is supposed to be about quilting, but its abstract tile-laying underbelly has much more in common with Tetris than with any form of the fabric arts. That’s okay, though, because after teaching a half dozen people this game, not one of them has stormed off in disgust at the loose interpretation. In all honesty, it’s probably better that the developer chose such a soft and comforting dressing for this game…because it’s absolutely brutal. 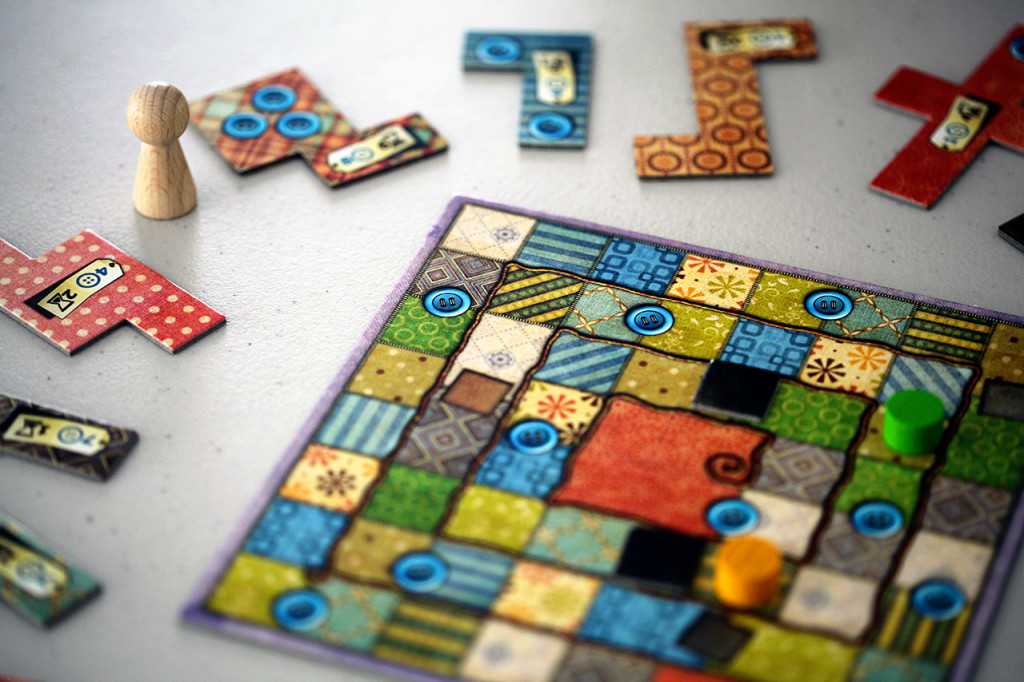 As mentioned above, Patchwork is a game that tests spatial reasoning and resource management through tile-laying; the game gives you just 54 “units of time” (spaces on the board) to accomplish the best 9×9 quilt possible. To do this, you will assess two options for your turn:

Taking and placing a tile allows you to fill your quilt with patches, which don’t inherently earn you points, but do prevent you from losing them during the final scoring, as each open space left on your quilt is worth -2 points. Advancing to receive buttons allows you to collect the buttons required to buy said patches, as well as technically earning you points, as each button adds to your score at end game. The balancing act here is time. Both options advance you a certain amount of time forward along the track, putting the end of the game closer in sight with each turn. Time isn’t always the enemy though, because littered across the board are spaces that offer bonus tiles for your board and vital “button income” spaces that pay out for every button on your chosen patches. This first tier of decision making is subtle, but really makes the game shine. 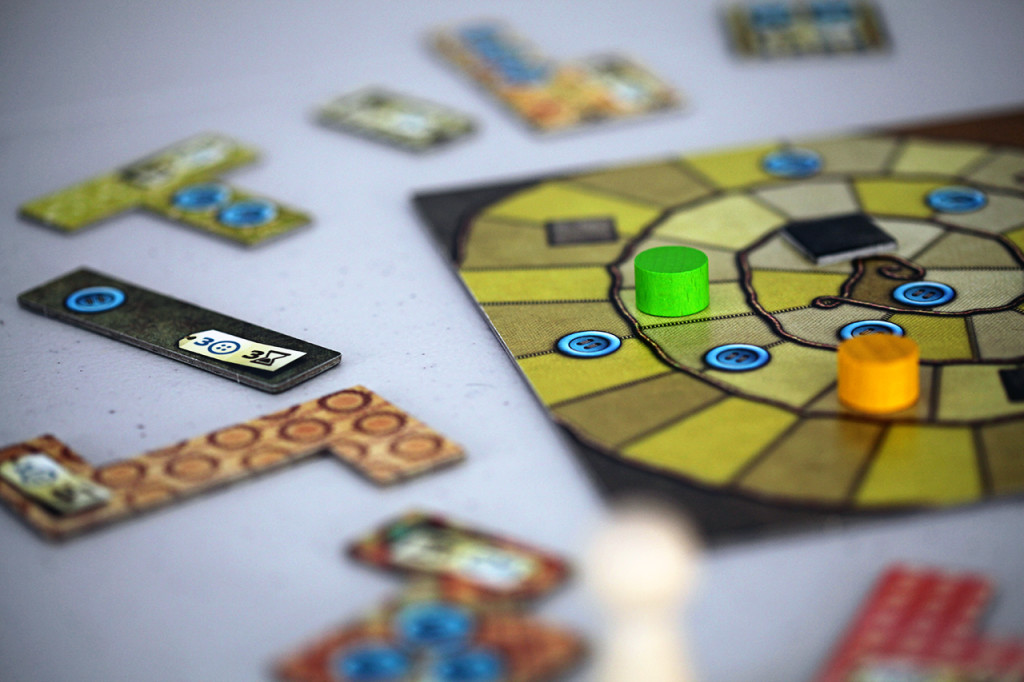 Patchwork then presents a second tier of decision making, found within buying and placing patches. The order of patches on display at the market is randomly determined, but open knowledge, so long term planning can be considered to some extent. You can see short chains of optimal decisions, provided your opponent doesn’t interfere by buying one of the fabric swatches you’re eyeing (Trust me, he/she will!). When purchasing a patch, you have to consider a number of things: cost in buttons; cost in time; number of buttons awarded during button income; and how it fits into your current board state. All of these factors take the current layout into account, making the decision tree variable each and every game. One patch may prove to be a lynchpin for your entire quilt in Game A, but be a worthless interference to your plan in Game B.

Patchwork is as much about earning positive points as it is avoiding negative points. Empty spaces in your quilt come at a price of -2 points each, meaning adding patches to your quilt is essential if you’d like to score in the positive range; however, to purchase those patches, you’ll need buttons. Buttons serve as both your currency, and the positive portion of your point total. Are you starting to see the dilemma?

You need buttons because buttons score you points. To get buttons you need patches and time. To get patches you have to spend buttons and time. To get time…well…you can’t get time. In Patchwork, time is always ticking. No matter what you choose to do on your turn, you will be advancing your time marker, hastening the end of the game. It’s a great feeling that makes each of your limited number of turns feel important and essential. Any game that can achieve that is worthy of a shelf spot. 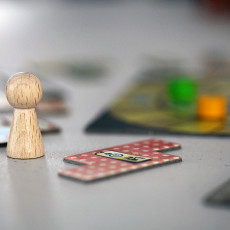 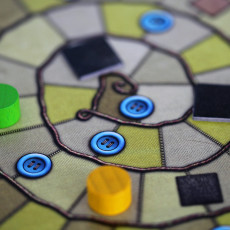 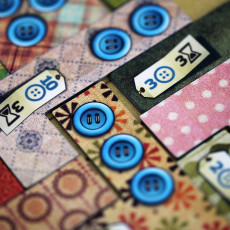 So, where does this deceptively simple little game fit in a collection? Wherever there is space. Patchwork is a game that I’ve found to be an absolute joy to play. It offers tough decisions in a confined amount of time, hidden under the guise of Eight Pointed Stars and Lucky Clovers. The negative scoring can be punishing – typically leaving me south of zero points – but the quick gameplay pulls you in for another round, rather than shutting you out. With positive feedback from all of the gamers that I’ve introduced it to, so far, I’d consider this an essential addition to any two-player gamer’s repertoire.

I have played this game many times and I absolutely love it. I love spatial reasoning puzzles and that’s what this is, when it comes down to it. Since the order of the pieces hitting the market and your opponent’s choices are always different, it’s a new puzzle every single time. There have been some games in which I totally killed it, made a beautiful quilt, and racked up the points. There have also been games in which my figurative sewing machine must have begun smoking in my face because I just failed miserably at making a cohesive quilt and lost point after point for empty squares. This game is quick-paced, easy to learn, and overall as absolutely wonderful as it can be frustrating (stop buying the pieces I want, Buns!).

Rarely does our diverse group unanimously agree on a game. Patchwork is an exception. Quilts, you say? Do not be fooled by the unassuming theme. The game condenses a number of meaningful and interesting decisions into this small box. Balancing the spacial element of stitching your quilt with the need to acquire buttons and minimize time is so simple in theory but can be punitive if not executed well. End game scores are low, often negative, but it wouldn’t be a Rosenberg game if he didn’t punish you for not feeding your quilt. If you enjoy abstract puzzle games, I highly recommend Patchwork for a quick and enjoyable mental workout. I am not a two player gamer but there’s a lot to love under the covers here.