This wave, X-Wing leaves the light freighters and transport vessels at home and gets back to its dogfighting roots.   As FFG describes:

Very exciting news for all of us who love this amazing game!  For more information on the individual ships, head on over to FFG’s site for more details.

At the end of January, Antoine Bauza posted a picture from Nurembourg of his newest 7 Wonders expansion from Repos Productions, Babel.  Last week, a BoardGameGeek page for the expansion was launched giving us more details about the unique game changes that Babel brings to the table.  For one, this expansion provides two modules which can be used separately or together in combination with the other two 7 Wonders expansions (Cities and Leaders). Here is how the BGG page describes the gameplay… 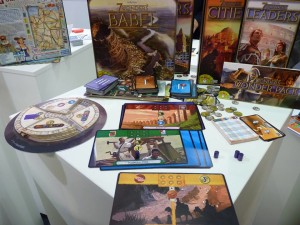 “In one half of 7 Wonders: Babel, players draft quarter-circle tiles at the start of the game prior to drafting anything else; each tile depicts a law that affects all players should it be put into play, e.g., all single resource cards provide an infinite number of resources each turn, or winners in military conflicts receive fewer points than normal.

During the game, players now have an additional option when discarding a card. Instead of gaining three coins, they place one of these tiles in the next open space on a circular display; the law on this tile remains in effect until the end of the game or until it’s covered. (Should a fifth tile be placed, for example, it’s placed on top of the first tile played.) At the end of the game, players receive points based on how many tiles they played.

In the second half of 7 Wonders: Babel, one of five law cards is randomly revealed at the start of each age, and a number of tokens are placed on it, based on the number of players. This card imposes a tax on players who want to play cards of a certain color. When a player pays this tax, he takes one of the tokens from this law card. At the end of the age, if all of the tokens have been removed, then players receive a bonus (which is depicted on the card) for each token they have; if tokens remain on the card, then each player without a token is penalized.

Just as the cost of cards increases in each age, the number of resources required to pay the tax also increases.”

The expansion has a tentative May 2014 European street date.

Carcassonne:  The Sheep and Hills are alive

Coming soon for Klaus-Jürgen Wrede’s Carcassonne is the latest expansion, Carcassonne: Schafe und Hügel or Carcassonne: Sheep and Hills for those not fluid in the mother tongue. As reported by BoardGameGeek News, this new expansion adds three new elements to the gameplay: sheep, hills, and vineyards that boost the spirits of the merry monks in the monasteries.

Judging from recent events in England, its probably a good thing that these sheep are based in France. 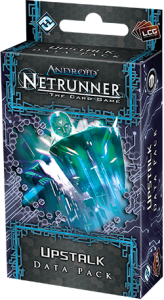 So Android: Netrunner is going to the moon!  Which for me is good because when I play I sometimes feel like space travel may be a more realistic option than winning the game.  FFG this week announced, Upstalk, the first Data Pack in the new Lunar Cycle.

Nasir Meidan, cyber explorer (Shaper), is on a lunar mission to find the net’s legendary source code.  Life on the moon is quite different than life in New Angeles (no sh!t) and as such, the new Lunar Cycle promises to disrupt the current flow of play and make Android: Netrunner games even less foreseeable.  Great, just what I needed, more stress during this game!  Maybe it will discombobulate the current game state so much that no one will know whats going on and only those previously confused by how to play will understand!

For more hints at what the Lunar Cycle is going to bring and/or how its going to drive you closer to that padded cell you’ve always dreamed of,  check out Lead Developer Lukas Litzsinger’s comments over on FFG’s website.

If you have not yet had a chance to play Android: Netrunner, check out our review of the game here. 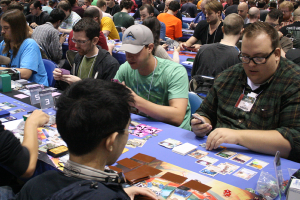 That’s me, in the green shirt, on their site!
(Photo Credit: Fantasy Flight Games)

And in not so new news…

Blizzard’s Hearthstone is a free-to-play digital strategy card game based in the World of Warcraft.  The game and art are based loosely on the now defunct World of Warcraft Trading Card Game, a game a number of League members played religiously for a couple of years.  In Hearthstone, players choose from one of nine epic Warcraft heroes to play as and then take turns playing cards from their customizable decks comprised of spells, creatures, weapons and abilities; all used to pummel your opponent.

Hearthstone is now in open beta for all to join.  All you need is a battle.net account and a computer. Visit Battle.net and sign up now. 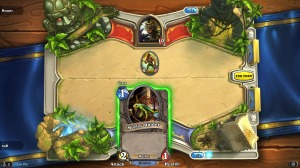 If you’d like to play with one of us our user names are: