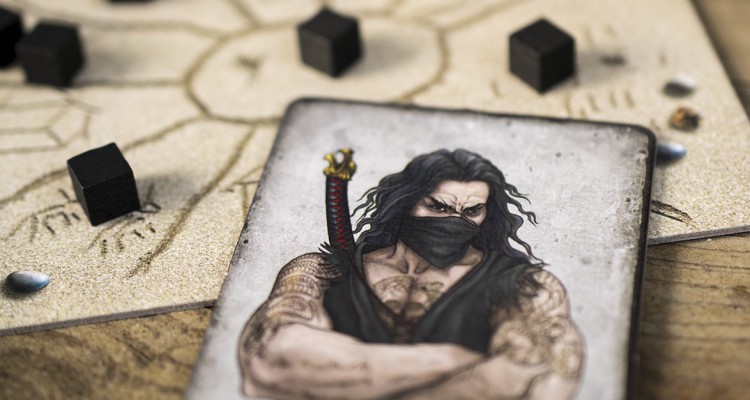 7Ronin, from designers Marek Mydel and Piotr Stankiewicz, is a 2-player asymmetrical area control game that tells the story of a marauding Ninja clan‘s assault on a small town, and the group of seven Ronin determined to protect the village and its people. Across eight days (rounds), the players will use their resources and wit to out-maneuver each other in an attempt to reach separate end goals; the Ninja leader looks to take over the land, either by killing off its defenders or using their superior numbers to take control of five village locations. The Ronin work to defend the village, killing off the attackers and hoping to survive eight full days of battle.

Each round of 7 Ronin progresses similarly through three core phases: placement, combat resolution and special location use. Each player begins the round by allocating their troops to the ten possible locations in the village. This planning is done separately, behind personal player screens, and then simultaneously revealed. Once placed, the defending player activates each of their seven ronin, using their unique special abilities to cull attacking troops, heal the wounded, or maneuver friend and foe to more beneficial locations. Any Ninja remaining after these activations then wound opposing ronin in the same location, making the warriors weaker for future rounds. If a ronin takes wounds equal to their individualized health value, they have fallen and are removed from play for the remainder of the game. Ninja who occupy locations unopposed can then activate the individual benefit of their location.

At the end of the round, each side regroups and gathers their troops before redeploying in secret and resuming the battle until one of the victory conditions have been met. 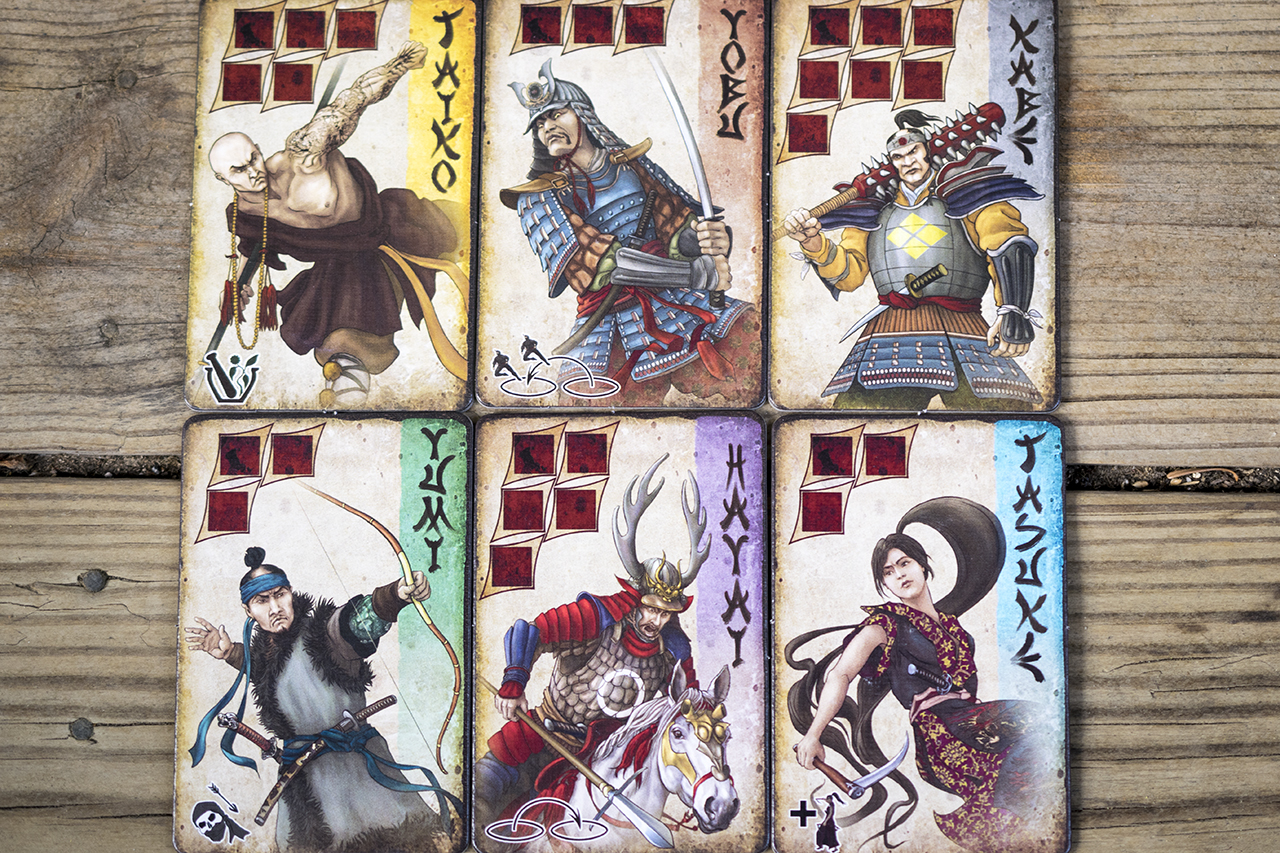 With seven different ronin abilities and ten different location powers, the first explanation of 7 Ronin can feel like a lot. For such a compact and component-light game, with a 15-30 minute run time, there seems to be an awful lot to remember and consider. Fortunately, with even a moderate amount of play, the memorization of the unique elements falls to the background, allowing you to focus on the nuanced depth found in the interaction of those many options. 7 Ronin quickly reveals itself as more than a 2-player filler game; its tactical and strategic choice points expand it into a much more fulfilling and cerebral game. Largely abstract and deterministic, this game is focused solely on clever play, reading your opponent and taking calculated risks. For either side, playing 7 Ronin well is a matter of knowing where potential weak spots are, knowing when to make sacrifices, and forcing your opponent into no-win situations.

Even with this classic abstract design, the chosen theme and its execution work well to draw you into the world. As a defender, you will become attached to your ronin, appreciating each of their individual qualities and feeling the turmoil when one finally falls to the enemy. As the attacker, your ninja—much like the cubes that represent them—are unnamed tools for accomplishing your goal. You will send them to their death in waves to advance your position, and will replace them with new fodder once they’ve served their purpose. As you progress through the rounds, the two sides begin to learn the habits of the other, identifying which locations and ronin may be preferred, and adjusting their battle plan for that day accordingly. There is a nice ebb and flow to the game that, while only lasting eight (or less) rounds, feels progressive and really does tell a story.

While it definitely could be played fast and loose, our group tended toward treating 7 Ronin as a much “meatier” experience, really contemplating potential synergies and options. Both sides have strengths, but it’s the weaknesses that are of sharper contrast. For the defender, the ronin can feel fragile, with even your thickest warrior only being able to sustain two or three good battles. The defense of the village is also very much a calculated one, with a lot of time spent determining who can take wounds and how to survive through to the next round. There are only a few ronin who can outright kill off enemies, and a majority of the ninjas removed from the game will be those who wound you. In this way, defending can feel more like being a punching bag for eight rounds, as opposed to a group of deft combatants. 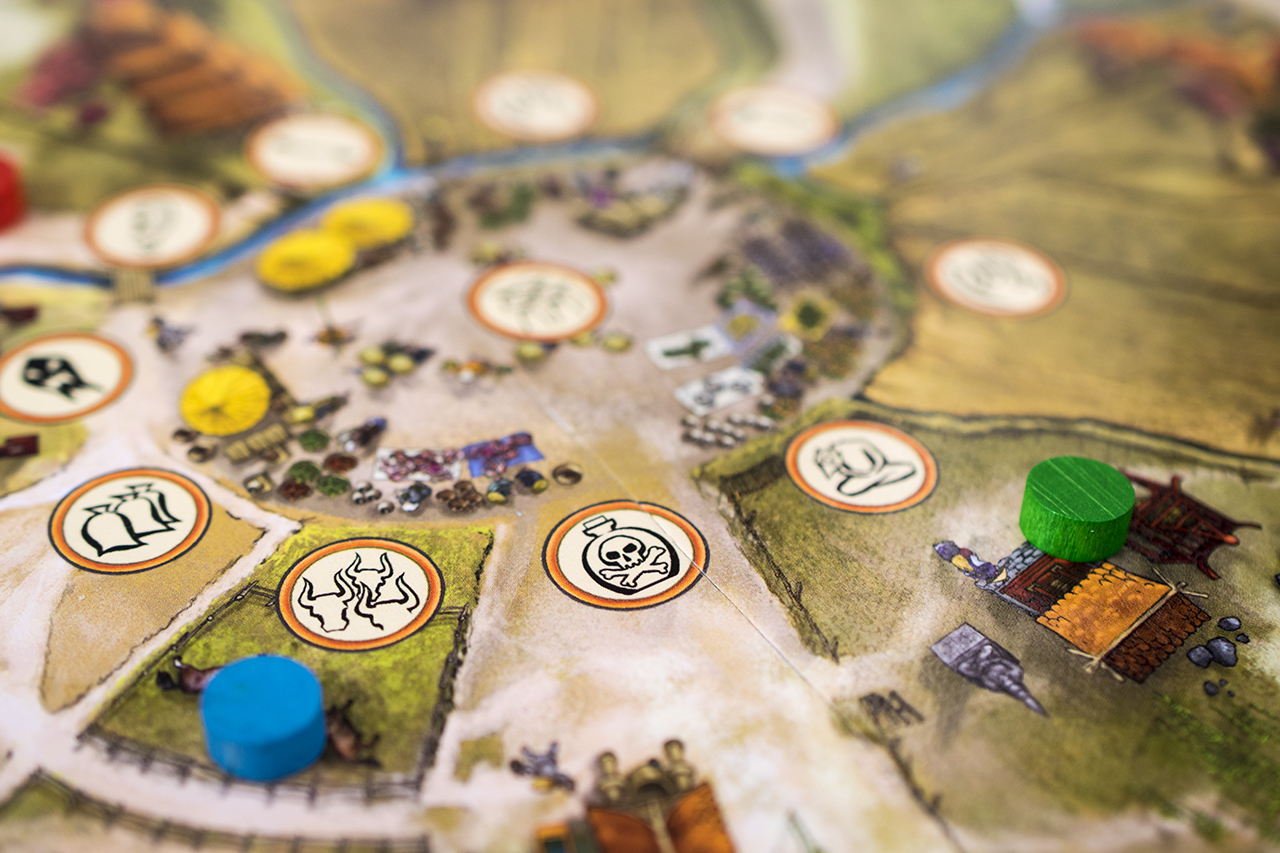 For the Ninja player, it is a difficult puzzle of troop allocation and resource management. With only 40 ninja for the game, and an increasing number of required ninjas placed each round, you have to constantly evaluate how to best ration your fighters. Additionally, the later rounds of the game force you to begin killing off your ninja, as they starve from the week long assault. Your biggest advantage is often in the middle rounds, when one or two ronin are on the brink of death and you’ve established control of a location or two. Move too quickly though, and you’ll overextend, possibly running out of late game troops. Too slow a pace, and the ronin will likely keep you at bay.

I, personally, found the total package of 7 Ronin to have many enjoyable qualities. It offers engaging choices at a fast and consistent pace, has a complexity that is deceived by its simple presentation, and delivers its fun in under an hour. While the rulebook could sorely use an update, those interested are in luck as Grey Fox Games will be releasing the revised version soon. As an unabashed fanatic of two-player games, abstract games, and tactical area control games, I happily recommend giving 7 Ronin a look. 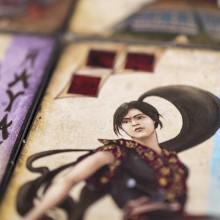 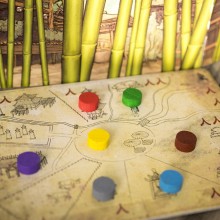 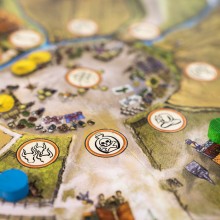 7 Ronin is like a lighter version of Stronghold wherein you’re challenged to think like your opponent in order to conquer him, or at least survive him. I enjoy this game and the challenge it presents when playing either side of the game. I’m inclined to play the ninjas, but I do think that the Ronin have a slight advantage in their longevity. I found decision-making to be a little easier from the Ronin side than when I played as the ninja. On the other hand, you can load ninja onto the board much quicker than the Ronin can take them out, providing the ninja with their own unique advantage. The game has a good balance and I have seen both sides win in a multitude of ways.

The biggest beef that I had while playing this game was keeping track of the area and Ronin abilities. There are seventeen abilities to keep track of when you’re worried about both sides, which you should be. This leaves you referring back to the rulebook repeatedly, as the designers have not really provided a very user friendly player-aide. With that being said, the abilities are fairly easy to learn once you play a few rounds and it’s not difficult to get into the swing of the game. This fact is definitely something to keep in mind if you’re playing against a novice opponent.

As a two-player game on the lighter side in terms of length of gameplay, I definitely recommend 7 Ronin as an addition to your collection.

While I only had the opportunity to play once, I immediately decided that this was my sort of game. As the Ninja player, I had to decide where to hit the Ronin where they were the weakest, while contemplating which of the locations I absolutely needed to occupy for their bonuses. There’s a lot of… not precisely bluffing, but thought and counter-thought in a game of 7 Ronin, where you attempt to out-maneuver and anticipate your opponent’s moves. While I think the Ronin pieces could be bigger (perhaps with a sticker showing their ability for easier identification?), the art and stylistic choices were excellent. I especially appreciated the difference in planning boards between the two sides, with the Ninja-clan making do with a map drawn in the sand, while the Ronin had an elegantly-drafted parchment.

First Impression: I was only able to get in one play as the Ninja and I really enjoyed it. I especially like the hidden selection, bluffing, and deduction that the game offers. Trying to get inside your opponent’s head and plan out the best attack (or defense, in the case of the Ronin), can leave you second-guessing every decision. The role of the ninja player seems to have more of a bluffing element to it, since you can “fake out” your opponent with the ninja cubes and how many you are placing. I did not get to play as the Ronin, but while it seems very difficult, it essentially comes down to just surviving the onslaught. The bamboo player screens are thematic and lovely, but could be made more functional with a player aid on the inside. I am looking forward to adding the U.S. version to my game collection when it becomes available.

7 Ronin is an excellent two-player, tactical asymmetric battle of attrition which pays homage to the great Seven Samurai movie. In contrast to the stark black and white film, this game features vibrant illustrations and a number of subtle artistic touches such as the differing player boards and the village spaces that blend into the landscape.

As far as game play, its brevity in both time and rules are certainly a boon for this title. The ronin player must ultimately endure throughout the game, using their cunning and special abilities to thwart the oncoming hordes of ninjas. The constant shifting of your ronin to areas of concentration, or in some instances unoccupied areas to activate certain abilities, can be a real challenge in the mid-game under the steady onslaught of your opponent’s forces. The ninja, on the other hand, must rely on their strength in numbers to overwhelm the ronin and gain a foothold in the village. Although you are far superior in numbers, careful planning must go into each assault as the game round and village locations restrict the areas and ninjas you can utilize. I have seen nothing drastic in my plays to conclude that one side is more powerful than the other; both are an enjoyable puzzle to explore. Personally, I find the ronin the easier of the two to grasp yet the more challenging to play effectively.

In all there are 17 action powers between the ronin and the village which will take a couple of plays to grasp. There is zero luck involved so once you are familiar with the abilities, and even your opponent, the game truly shines, leading to a much more enjoyable experience while you scuffle to outmaneuver and outguess the other. The tension each turn behind your player screens is stirring, culminating in the dramatic reveal which leads to great joy or confirms your worst fears.