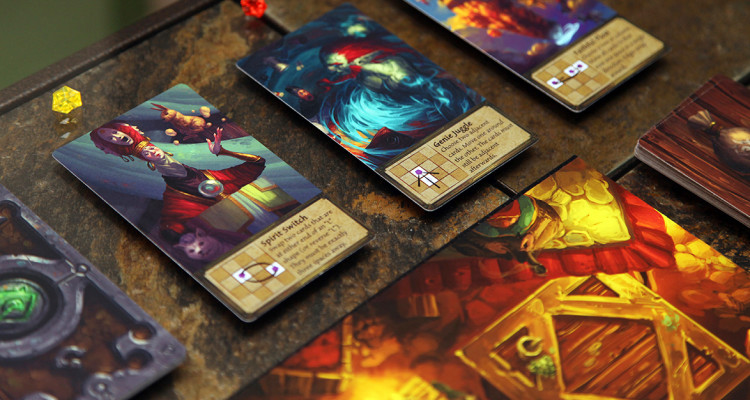 Psst. Hey, you! Yeah, you, weary traveler. Are you in the market for some potions? I happen to have a fantastic stock of tonics and tinctures that you may enjoy. Maybe an elixir or two? Yes? Excellent! Just let me find them… ah, there they are! One second now, I just need to arrange them into nice little rows… 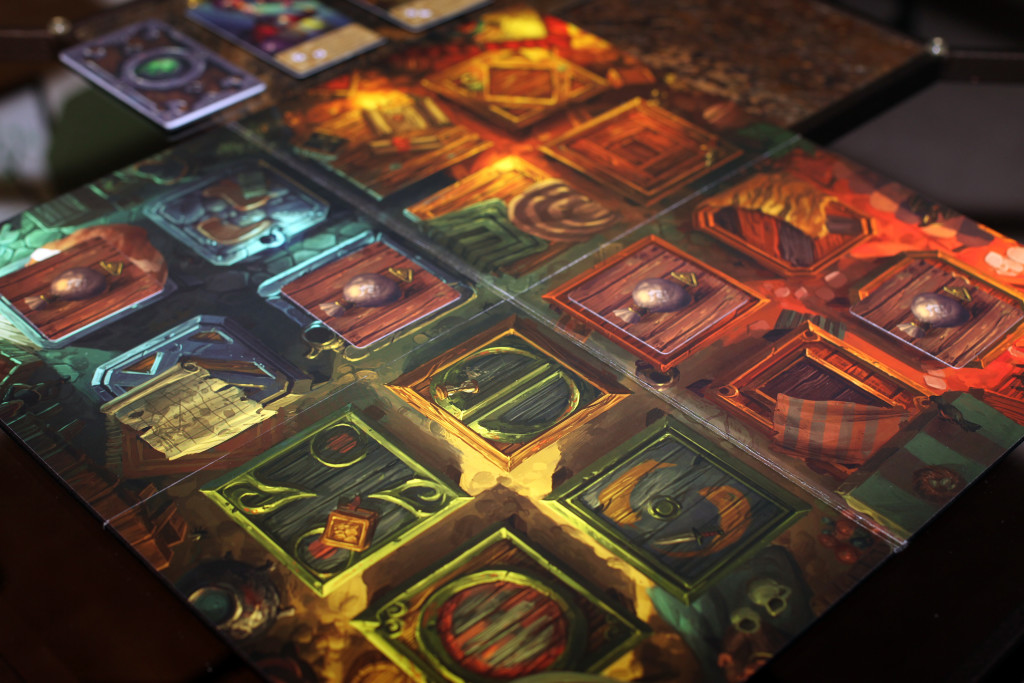 Apotheca, from designer Andrew Federspiel and Knapsack Games, is an easy-to-learn abstract puzzle game with an element of Memory and a little bit of take-that strategy built upon a potion making theme. You aim to reveal potion cards of matching colors by utilizing your apothecaries (programmed movement cards) to rearrange the potions into sets of three. You are allowed two different actions per turn, choosing from the following:

After revealing or rearranging potions, if you’ve formed a set of three matching cards (or one of the several bonus arrangements that you can try for), collect that set and place it on top of one of your apothecary cards. Apothecary cards that are covered in this fashion may no longer be used for movement, so plan carefully when you collect a set from the board! Given this, you will certainly need to obtain additional apothecaries throughout the game in order to reach the three sets required to win. 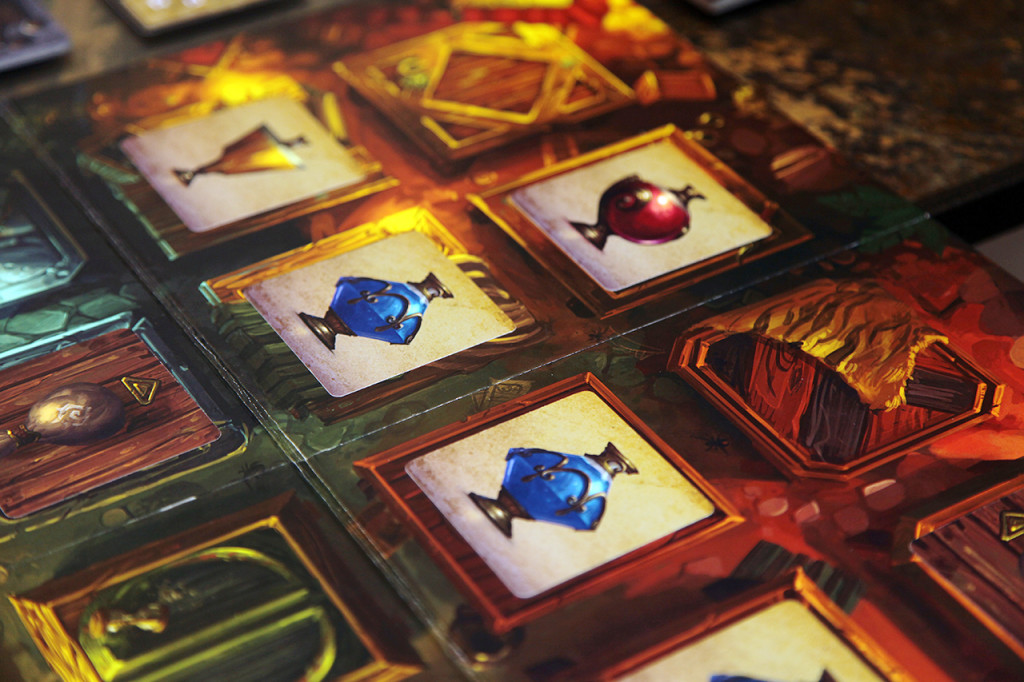 With each player having secret knowledge of the potions that they’ve added to the board, this allows you the perfect opportunity to try and deceive your competitors and bait them into revealing or rearranging cards in a way that helps you, or merely wastes their time. The state of the board changes consistently, limiting your ability to plan too far into the future and requires quick thinking, problem solving, and optimal use of your apothecaries to navigate the new puzzle that greets you from turn to turn. You must balance placing your cards in advantageous spots that allow your apothecary movements to create sets, while at the same time not creating opportunities for your opponents to do the same. After all, it only takes three sets to win the game!

Apotheca is generally a fast-paced game, although it’s possible to encounter some analysis paralysis if you’re playing with someone who likes to over-think their options. The experience also differs based on the number of players in the game. Playing Apotheca with two players allows you to exercise more strategic placements and incorporate some offensive plays in order to trick your opponent. With three players, you encounter just the right amount of chaos to throw you for a loop while still keeping the game light and fun! Four players, on the other hand, introduces a team element which opens up even more tactical opportunities. Given the variety in apothecaries and its ever-changing board, Apotheca will easily hit the table many times and continue to keep you engaged play after play! 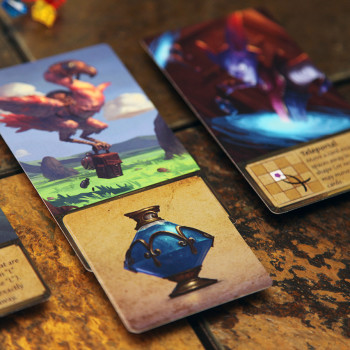 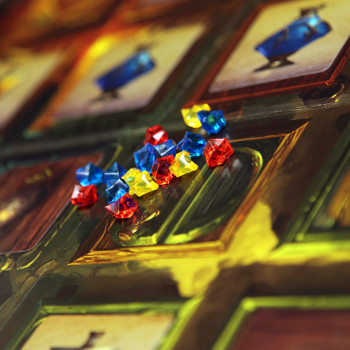 This game is excellent! When I first played this game Matt said “you’ll like this one,” and I believed him, but I was still wary. He was 100% correct. I really enjoy trying to utilize the apothecary movements to rearrange potions – each turn is trying to work out a puzzle that has changed since the last time you messed with it. You have to keep an eye on other players’ apothecaries to try to anticipate their moves while planning your own based on what they could do. This game is a perfect balance of frustration (because your opponent keeps throwing off your groove, man) and excitement. You watch your opponent move one of your hidden potions exactly where you need it and inside you are just shouting “YES!” while outside you try to put your best game face on like “that move doesn’t affect me, whatever, see if I care.” I have really, really enjoyed playing Apotheca and I very much look forward to its campaign.

Apotheca has quickly become one of my favorite games to have previewed so far. Designer Andrew Federspiel has followed up on the success of Knee Jerk with something wildly different, but equally creative and well made. The design is simple in concept but offers a range of strategic and tactical decisions that ebb and flow across the different player counts. Want something that rewards long term planning? Play with two. Want a bit more instability in the board state? Invite over a third player. Want to test your telepathy? Find another friend to bring it to four and give the team game a whirl. No matter what, you’ll find Apotheca to be a fast, balanced, and enjoyable experience. I really look forward to supporting this project soon.

The League of Nonsensical Gamers would like to thank Andrew Federspiel for kindly providing us with a prototype of Apotheca for this preview.

Apotheca is currently funding over on Kickstarter. If this game stirs your pot, head on over to the campaign page by July 9, 2015 to purchase your own copy. For $35 you will receive a full copy of the game and any stretch goals that have been reached.