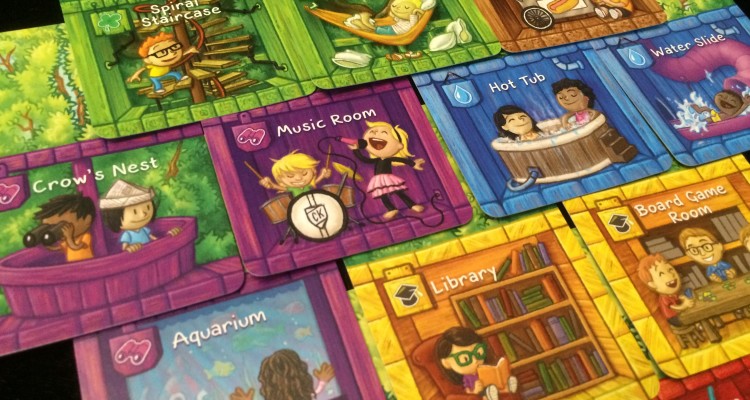 Best Treehouse Ever is a fun fast paced card drafting game from designer Scott Almes and Green Couch Games (publisher of Fidelitas). In the game, you’ll compete against your friends to build the best treehouse by furnishing it with a number of wild and crazy rooms. Keep your tree house balanced and thwart your friend’s plans to claim the title of Best Treehouse Ever! Construction of your treehouse will take place over three rounds, while each round is comprised of three phases: Deal, Build, and Score. At the start of each round, all players will be dealt a hand of 6 room cards. On your turn you will select a card, place it face down in front of you, and pass the cards to your left. Once everyone has selected a card you will place the room in your treehouse.

You have the freedom to construct your treehouse in whatever manner you choose with only a few restrictions:

These building restrictions provide direction to your draft and require constant awareness of the physical placement of the rooms in your tree and the trees of your friends. The ability to start a new set of colored rooms gives you flexibility, but you must be cautious not to cut off existing colors too early. If at any point you are unable to place a room card on your turn, you must discard the card that you drafted – reducing the final size of your tree house and ultimately the points you can score. 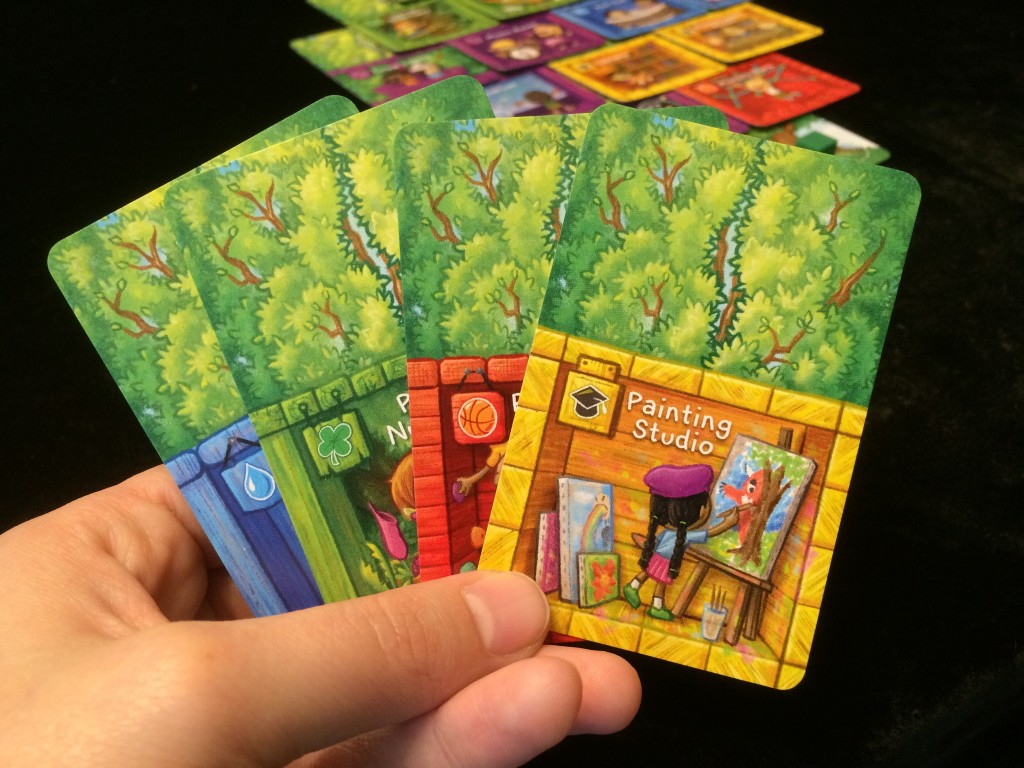 The draft phase continues until all of the room cards have been placed (or discarded) and then the scoring round commences.  Starting with the player in the lead, and continuing clockwise, you will choose one of the four game changer cards, which either multiply the score of one room color or completely prevent a room color from scoring. While selecting your game changer card first, you will be the last to play it. As a result, the player in the lead is at a slight disadvantage during the scoring phase. This gives your friends the opportunity to capitalize and potentially negate a runaway color from scoring or double a color that you have little to no vested interest in. Room colors that do not have a game changer card will score one point for each room of that color in your treehouse.

This sequence of play continues for 3 rounds, at which point final scoring takes place. Players with a majority of one or more room colors at the end of the game will score an additional point per room of that color. If a color is tied between two or more players, no one scores. You win if you have the most points at the end of final scoring. Simple as that! 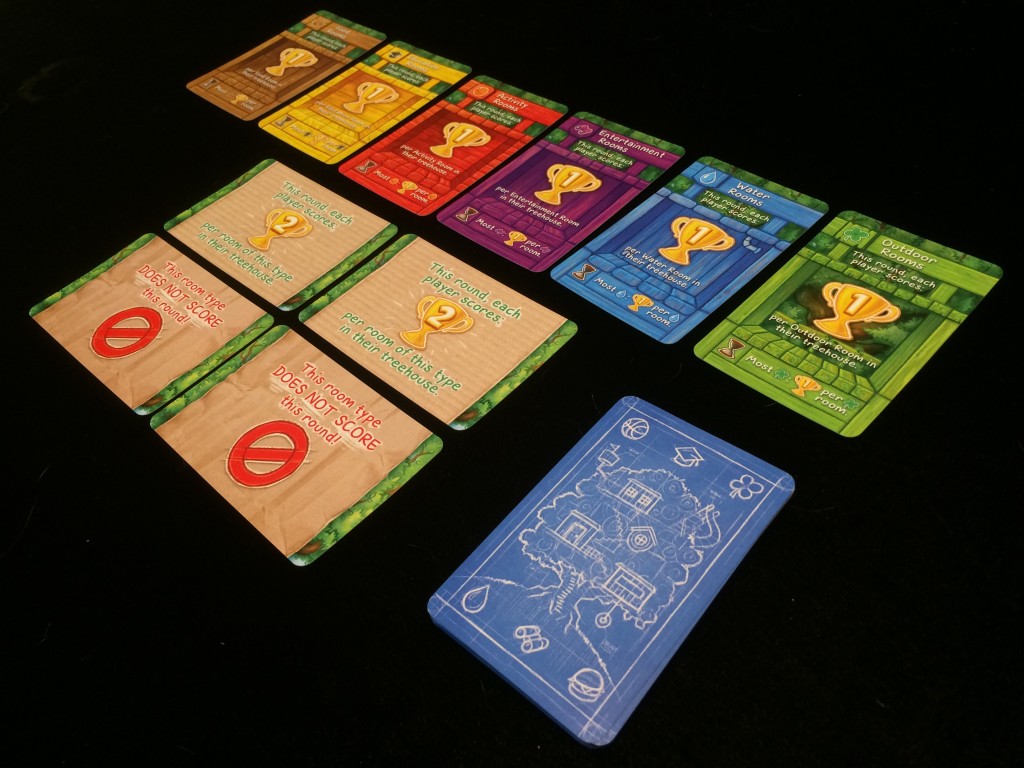 If you build it, will they come?

There are a number of drafting games on the market, so how does Best Treehouse Ever stand out among the pack? The added spatial element provides a small, yet enjoyable twist with a number of meaningful choices as you physically build your treehouse from the ground up. You must maintain a balance, literally, between your room placements and the colors you select. Cut off a color too soon, or draft a room that doesn’t properly balance your tree and you just may have to discard a valuable room.

While player interaction is inherent in the drafting mechanism, Best Treehouse Ever adds an extra layer of interaction through the use of the game changer cards during scoring. You will choose what color rooms score – and how much – making each room selection count. You can choose to specialize in only a few colors, potentially exposing yourself to the “do not score” game changer card, or you can diversify and build a few of every color, which may lead to cutting off a color early and minimizing your scoring potential per color.

Now, let’s also not forget the superb artistic contribution of Adam McIver, whose quirky and colorful room depictions elicit a childlike glee as you brag to your friends around the table that you’ve just built a waterslide that leads to your board game room.

At the end of the game there is a true sense of achievement when you look down and realize that you’ve accomplished something from your childhood bucket list – you’ve constructed an actual treehouse!

Best Treehouse Ever is an easy pitch for anyone who likes enjoyable filler games, a nice spatial puzzle, and who has a little bit of imagination leftover from their childhood. One step above others in its grade, Best Treehouse Ever makes simple drafting enjoyable by forcing quick and easy, but still meaningful decisions about card placement and scoring bonuses. The total package blends together to make a vibrant and heartfelt game that is difficult to play just once.

The League of Nonsensical Gamers would like to thank Green Couch Games for kindly providing us with a prototype of Best Treehouse Ever for this preview.

Best Treehouse Ever is currently funding over on Kickstarter. If this game piques your interests, climb on over to the campaign page by April 18, 2015 to purchase your own copy. For $16 (plus shipping), you will receive a copy of the game along with all of the stretch goals that have been attained.