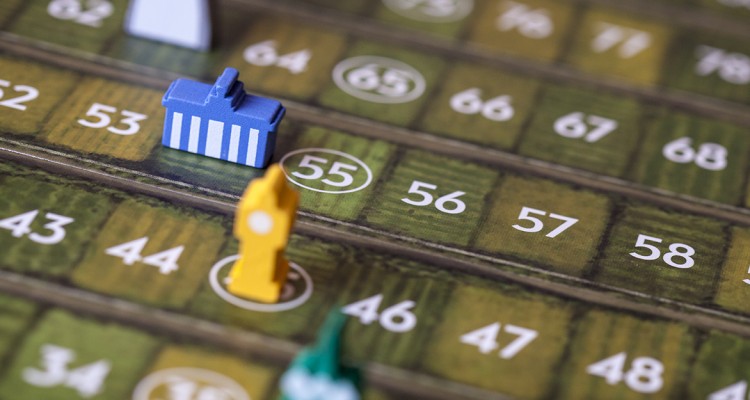 Right, listen up! The King has decreed, in this great year of 1800, that we all must work together to build the greatest city in all the land! As you plan with your purple-and-yellow backed tiles, be sure to consult your partners on what these cities need. Of course, a little selfishness is always good… you wouldn’t want your neighbor to take all of the glory, would you? If you are successful, we shall all look upon your little… American suburbia… as one of the greatest in the kingdom.” (Looks at front of the box…Looks at back of the box…Looks at rulebook again…) “Yea…I think that’s right…”

Between Two Cities is a tile drafting and placement game in which you are, literally, ‘between two cities’, and must work with those seated next to you to develop and grow your shared locations. These cities will be built up over three rounds of drafting to produce a 4×4 grid of tiles. There are six different building types in the mix that you must plan for, and each will score in unique ways based on their placement in that city. You must also keep in mind that in the end, only your lowest scoring city will count, so neglecting one ally in favour of the other will not get you very far. 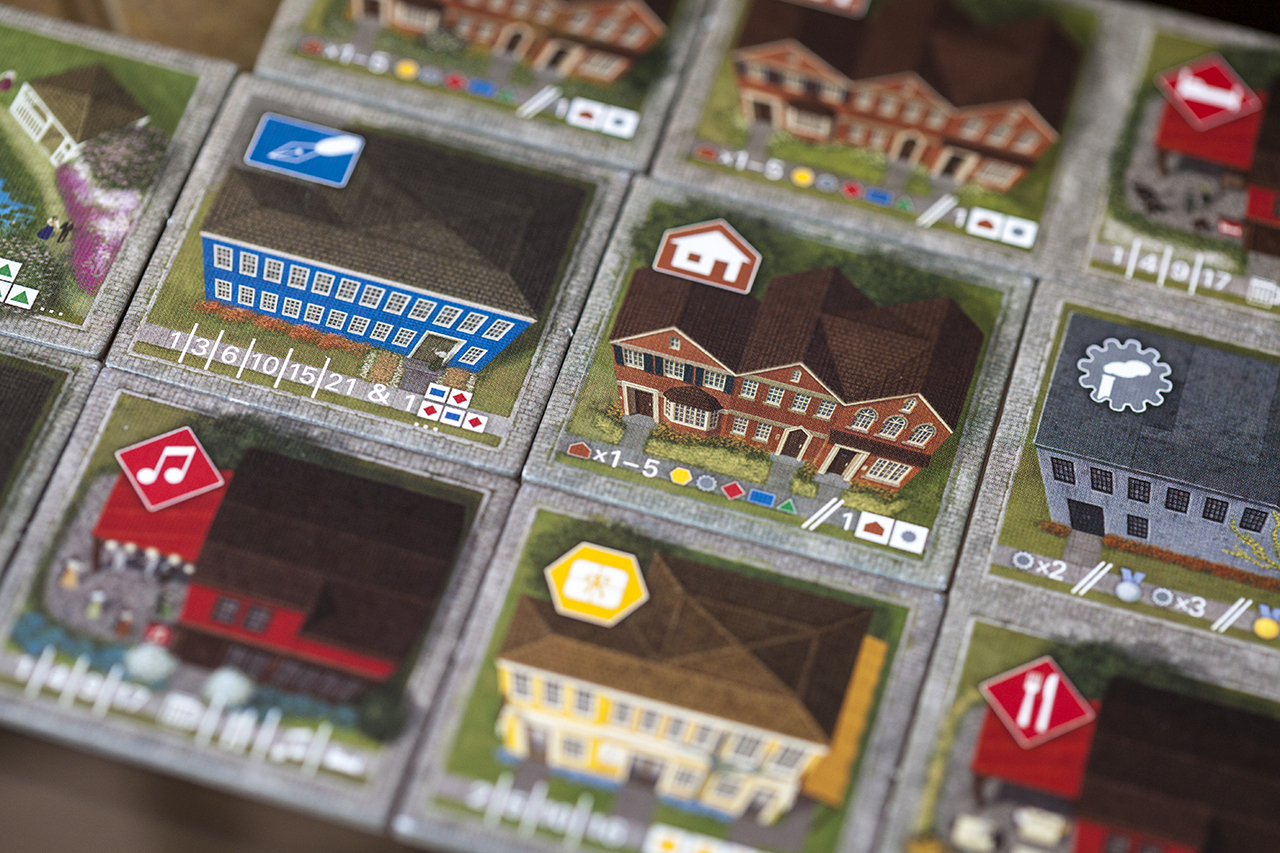 The first round begins with everyone drawing seven face-down tiles, two of which will be selected for use, with the remaining tiles being passed to the left. Each city to your right and left must receive one of these tiles, so at this point, you ought to be discussing with your co-builder as to which of the chosen tiles should be placed in that particular city, and where in the grid it should be placed. When adding tiles to a city, they must always be placed adjacent to another existing tile. Once completed, this drafting process will be repeated twice more with the remaining tiles that were passed to you, for a total of 6 tiles in each city at the end of the first round.

The second round of drafting utilizes the duplex tiles, which are larger sections that contain two building types each. There is only one turn of drafting in this round, so each player will choose two tiles from the three that they are given, and discard the remaining one. The trick with the duplex tiles is that some are oriented horizontally, while others vertically, and they must maintain the same orientation when placed as the rest of the tiles within the city.

Finally, the last round will be a repeat of the first, leaving you with two charming cities to either side! After these three rounds, each city is scored based on the buildings used. There are six building types, each with their own scoring quirks:

After this scoring, each player determines the lowest score of their two cities. The player with the highest score at this point is the winner!

Between Two Cities is a quick, fast-paced drafting game that slots easily in the “filler” category. The rules and mechanics of the game are very easy to grasp, especially for a veteran gamer, as very little needs to be explained aside from how each building type scores. Something not found in many comparable games is the scalability of the gameplay across the range of 3 to 7 players. There is no noticeable difference in gameplay or game length based on these standard player counts, meaning the experience is level each time.

The problem here may be the overall experience, as I feel this game is really meant for beginner gamers as a sort of “gateway game”. While I played it with my family and they loved it, I found that, after playing several times with our group of experienced players, the gameplay itself failed to be engaging. There never ended up being much conversation about what tiles to select or where they would be placed. Instead, we would quickly play through the rounds and all of a sudden get to the end and score our cities. I know that one of this game’s stand-out features is supposed to be the cooperation and discussion with your neighbors, but I just didn’t see it happen. It’s not a bad experience, but it’s not great either. 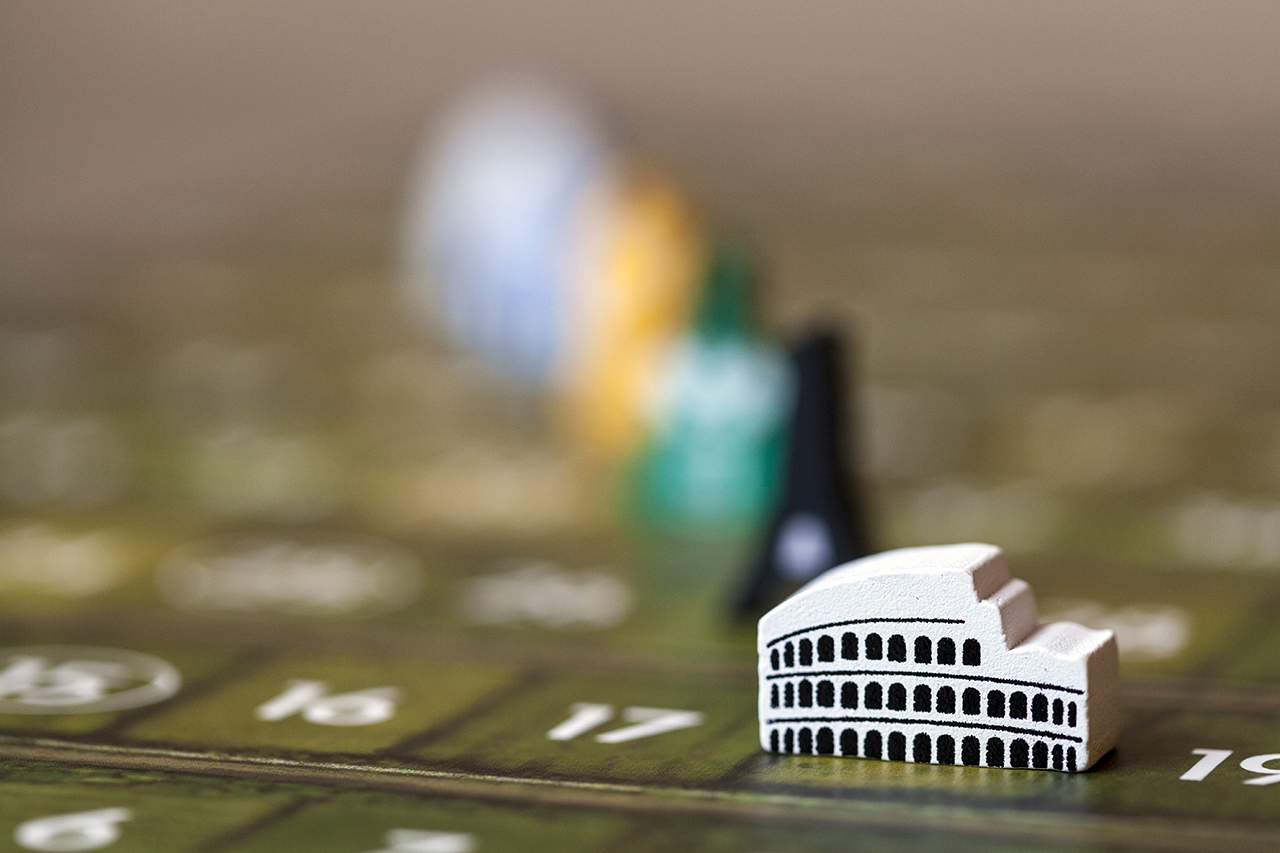 On the topic of scoring, the end-game was another contentious element for our group. Given that players are sharing cities, and only the lowest may score, there will be ties in this game. In fact, I have yet to play without ending up with multiple tied scores. Part of this, I think, is due to the way that the scoring system tends to plateau for certain building features, making it inefficient to have more or less than the target number in your city. The first tiebreaker is the player with the highest scoring second city, while further ties are broken by the player with the most buildings of a single type in their cities. Some people don’t like tiebreakers, but I think you have to consider them here. I’m not thrilled with it, but as long as you can keep that in the back of your mind, it can be mitigated. This does, however, force a player to favor one building type over others, even though all are valid paths to victory. Plus, given the nature of the random draw and the draft, it’s possible that the tiles needed to contend for the tie-breakers will never come your way.

Many Stonemaier games come with a solo ‘Automa’ mode and Between Two Cities is no exception. I gave this variant a shot in “Full Mode” because the “Simple Mode” did not look all that interesting. After playing it four times in a row, I found that I do enjoy it as a solo game. When playing solo, you’ll still need two additional opponents, in this case a pair of NPCs named Autommaso and Automarta. The former builds in the city to your left (“leftville”), while the latter builds in the city to your right (“rightville”). Each of these also work together by building a third city called “Automacity”. The rest of the gameplay is the same as the 3-7 player format, but the two Automas select their tiles based on random card draws that dictate what building type is added. This is typically broken down to 4 options, (1) add a house, (2) add a factory, (3) add a building type you don’t have to increase the value of your house tiles, and (4) add the tile that will increase your city by the most points at that moment. I think the level of thought and calculation that is required to make these selections for the Automas is really what makes the solo format engaging and fun for me.

There is additionally a two-player variant that I’m quite tempted to say is an improvement to the original format. It feels like a more heads up, cutthroat game where player interaction is increased. In this two player version, you are each building two of your own cities. The gameplay is almost identical, but there are twice as many drafting turns and your final score is the total of your two cities, as opposed to the value of your lowest city. 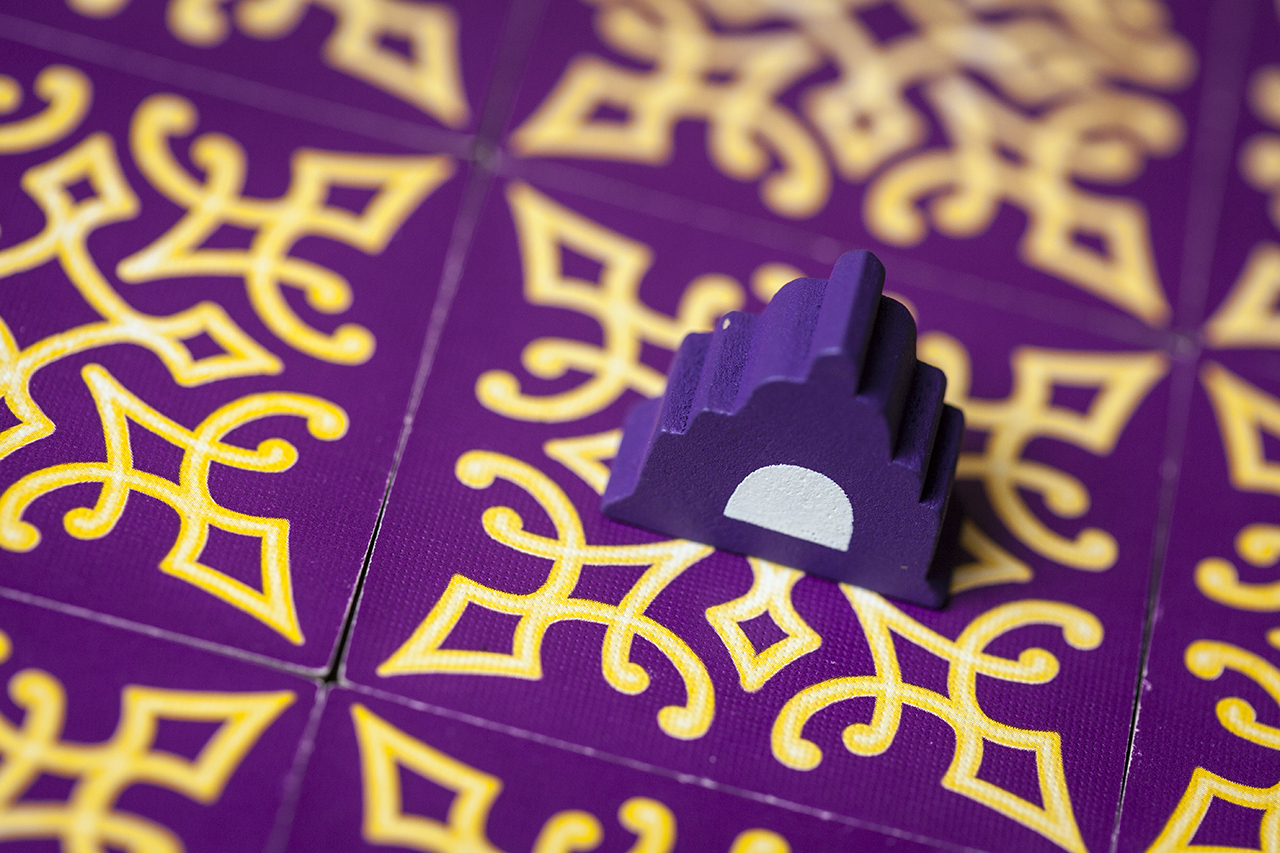 Overall, I consider Between Two Cities to be an okay game that I will gladly play with my family and non-gamer friends. It’s a simple game that can really be played by anyone, but for those looking for a bit more to chew, they may find the flavour to be lacking. For that reason, I’m not going to recommend this to most people. Interestingly enough, however, I personally found the solo and two-player variants to be better versions of the game, and they have been easier to get to the table as well. This is a title that has definitely been added to the list of games that I can play alone, and is probably the first one I’ve actually found to enjoy solo.

Between Two CIties has received a mediocre response from our group, but has also spurred a wealth of conversation related to the broader ideas found within this little tile-placement game. It has me considering the value of player interaction and how collectively working toward a common goal – the two cities – does not inherently create meaningful interaction. The game has also given me the context to consider player counts and how fundamentally changing a game to appropriately serve 1-7 players in a meaningful way makes the total product feel disjointed; i.e., the two-player version of Between Two Cities is its best iteration, but it entirely removes the unique factors found in its elevator pitch – the cooperative city building and the lowest-valued city scoring mechanism.

This title has also forced upon me a rare critique of the seemingly random aesthetic choices, in which egregious purple and yellow “persian-rug” patterns have been plastered on a game about building industrial-era American-ish cityscapes. Overall, Between Two Cities has done me the courtesy of setting a new benchmark for uninspired game design. It is a title that barely innovates one or two things, does so in an ineffective way, and packages it all in a nice box with an appealing price tag. For a gamer as entrenched as I am in the hobby, I consider this game a trap – one that I wouldn’t bother with and can hopefully steer others away from.

Prior to sitting down, I had zero expectations as I knew absolutely nothing about this game. The box cover looked promising, until the lid came off, revealing the mismatched tiles below. As a graphic designer, I like to appreciate the art and illustration of the games I play and this can at times be a key factor for me. This game however just has no idea what it wants to be in terms of art style. For example, the fantastical cover has absolutely nothing to do with what you’ll find inside the box. I agree with Ben that this is a game for non-gamers, but that being said, there are so many other appealing choices to consider before this one. Artistic critique aside, this was just not that good of a game. After finishing a beer and my two cities, the confusing scoring  began. It ended in a 6 way tie! My second play with 3 players also had more ties. Not fun…