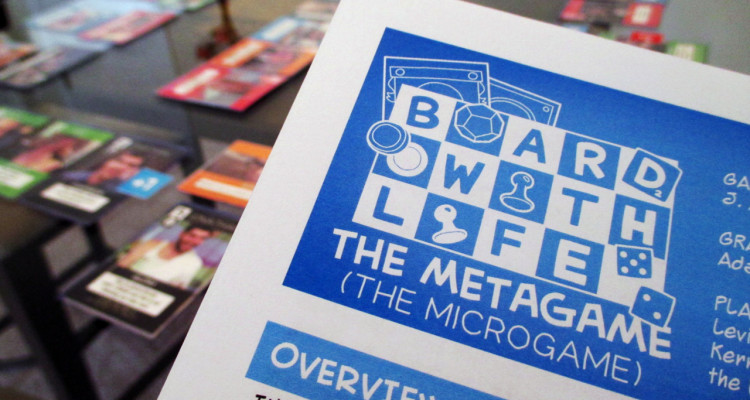 Board with Life: The Metagame (The Microgame) | Preview

Board with Life, the web series, follows a group of people (sometimes the word “friends” seems a little too strong) as they struggle with life’s greatest challenges – love, competition, friendship, equality, hygiene, dog-swapping…Oh, and there’s some board games, too.

With the Season 2 Kickstarter live (roughly three weeks and counting), fans of the show now have a chance to send a little monetary-love their way in support of more content. While some big bucks can earn you a spot on the show, a meager $10 will get you some exclusive content as well as a microgame featuring your favorite group of oddly horrible human beings. 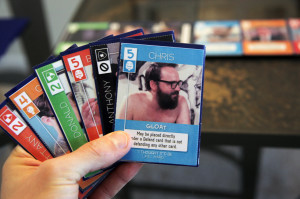 The BwL team has brought on J. Alex Kevern (Daxu, Easy Breezy Travel Agency) and Adam P. McIver (Coin Age, Council of Verona) to design a Print-and-Play game highlighting the best part of the Board with Life series – how terrible they all are to each other.

Board with Life: The Metagame (The Microgame) consists of 25 cards (plus a 5 card in-spansion) and a few extra counters. The game components are made of the best virtual cardstock around and feature full color art of each of the BwL characters. Nad graciously fronted a few bucks to get these printed on sturdy cardstock, but you could easily use an at-home printer and a few card sleeves to get this to the table in playable condition. The cards consist of 5 sets, each with one of the BwL characters, numbered one (1) to five (5). Each number is associated with a different ability that can be used to change the game-state and generally screw with your opponents.

In BwL: TM (TM), players will be looking to score the most points across three rounds by controlling a majority of points in as many characters as possible. Each player will have a hand of cards (either dealt randomly or drafted – your choice); on a turn, a player can add a card to their board and use its associated power (optional). Then the turn passes. Each card adds that number of points to your “total control” of that character and has an ability. 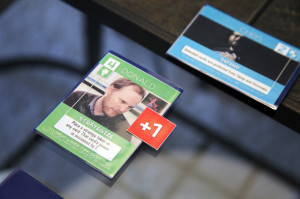 The round goes until all cards have been played. Players then score based on who has the majority value in each of the five (5) characters; however, the player with the majority only scores points equal to the the cards that everyone else has of that character. Kelly B! found that out the hard way as she exclaimed ‘I scored so many Donald Points!” only to then have me Eliminate my own “Donald Points” (why isn’t this point currency used in more games!?), resulting in a goose-egg for her.

As a fan of the show and Season 2 backer, I was excited to have a chance to check out this PnP and give my opinion of it. We had a chance to get it to the table several times over the last week and I personally have been able to play it with 2, 3, and 4 players. With that being said, I think it is best to break this microgame into two pieces: the game and the flavor. 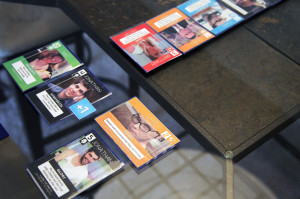 Mechanically, this is a funny little game. After explaining it initially, I was mostly met with blank stares and a general vibe of “uh….ok?” Even with our casual League members, we don’t play many “play a card and pass your turn” kind of games. I think for some, there didn’t seem like much of a game here. Though I empathized with that feeling, it took roughly zero time to realize that there was more here than expected. This is a microgame without a doubt, but that doesn’t mean there isn’t meat. Each card ability contributes to the “take that” style of gameplay and you’re quickly faced with choices – mainly of who to screw over next. While the issues of card-counting and having a bad hand could arise, the latter is solved by the drafting system (don’t play without drafting). The former, knowing what has and hasn’t been played and using it to your advantage (or just to taunt people), is less of a problem and more…the point of the game. 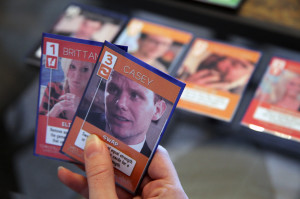 In terms of theme, there isn’t exactly one. I suppose it’s Board with Life themed, but the show is just about people – which makes this game people themed. There’s nothing making this game a “Board with Life Game” outside of the card art and flavor text, but that’s ok. It’s not about recreating the events of the show. You pull this game out because it’s a novelty, but you stay because of the social interaction found so heavily in the gameplay.  Sure, you’ll probably yell “It’s my night!” about 1,000 times, but you’ll end the game with more memories of your own game group than of the series characters.

While the theme easily fades into the background once you start playing, our group also ran into some problems with it. Mainly, those who hadn’t seen the show couldn’t quite get into the game as well. Without the (meta) understanding of how you’re playing a game about a group of people who play games, and that the microgame pulls for the same kind of interactions that you see in the show, it fell somewhat flat. That being said, this isn’t a mainstream purchase from your FLGS, so it likely won’t be hitting the table with many people who aren’t fans of the show.

As a fan of the show, Board with Life: The Metagame (The Microgame) really does it for me. I had originally watched the show as the episodes first came out and then rewatched them when the Season 2 Kickstarter launched. Being able to recreate the tone of the show in a microgame was a great idea and really the best way to showcase what Board with Life is actually about – the people. There were some comments and ideas thrown around about how to make the player feel more like the characters (e.g. Make all of the “Eliminate” cards feature Brittany), but I think the point of the game is more to recreate the atmosphere rather than the show itself. It’s about getting people to interact around the table. I really think this little PnP game accomplishes that.

If you’re a fan of the show, I would definitely recommend backing the Season 2, both to get access to this game and to support a great group that’s doing a lot for the hobby. If you’re not a fan of the show, this game isn’t going to make you one, so it may be a pass for you (although you could still support them – they’re still board game people, afterall). If you know nothing about the show, I highly recommend you check it out and see if it’s your thing. Odds are, they’ll get a laugh out of you.

This is a game for people who have seen and enjoy the Board With Life series, I feel. Featuring quotes from the characters and scenes from various episodes, the card design is minimalistic, but effective in getting the point across. The general rules are easy to follow and most cards are straightforward, if limited, in their implementation. One exception is that the myriad options available for the ‘swap’ power caused some memory-faults among the group, and should have been made to fit on the actual card.

Overall, for fans of the series it can be an enjoyable way to fill some time, but the mechanics just didn’t have enough options for strategy to catch my taste. Still, it did inspire me to check out the first episode, so we’ll see what comes of that!

I’ve seen a handful of episodes of this show and I’ve enjoyed those that I’ve seen. With that being said, I don’t really think that having seen or not seen the show had much of an impact on my ability to play or enjoy this game (although the flavor text on the cards was funnier when I knew where it came from). The exception to that statement is the ability to feel thoroughly grossed out at the sight of the “Sticky Chris” card from the INspansion.

I’ve only played this game with two people. It was a blast! There was plenty of plotting against Buns, despite the relatively simple nature of the rules upon their initial explanation. The only thing I didn’t like about playing with two people is the fact that I knew which cards Buns had. This allowed me to anticipate his possible moves, sure, but he also knew what I had and could do the same to me. He and I discussed the possibility of taking 2 or 3 cards out at random before dealing them out to help with this issue – maybe that’s something that we can try.

This is definitely a good game to check out. While you’re at it, check out the show!

I went into this game knowing nothing about the show except that they do an awesome “Roseanne” parody for their opening credits. The gameplay is pretty good, but I always felt (even though I won) that I was missing something and couldn’t get the strategy down. The card draft element definitely adds another layer of strategy once you get the game mechanics down, but I personally preferred the shuffle-and-deal rules. I also struggled with the theme of the game only because I was not familiar with the cast. I am sure those who are familiar will love it and will get the jokes. This is definitely good cross marketing to make people aware of the show and I will be checking out the show. As for the game, I don’t know if it will end up on the table very often.

This is a decent little game with solid mechanics. The gameplay was simple to pick up, but the amount of card movement that occurred made me struggle to come up with a legitimate strategy for planning ahead. I just had to play a card and hope that someone wouldn’t screw me over. I feel like this game would be a lot more fun if I had gotten to watch the show first.  I can see how, if you are a fan of the show, backing the kickstarter and getting this PnP game is a great reward.