All Kinds of Mergers & Expansions

Asmodee soaks in the FFG Goodness

Well, where do we start with this one? As I’m sure a large majority of you have heard, Asmodee has blown our minds for the second time in 3 months by announcing a new merger with everyone’s favorite US publisher, Fantasy Flight Games. The press release itself does not get into much of the details, but W. Eric Martin over at BoardGameGeek has a great post outlining some of the nuances as discussed with Christian T. Peterson, CEO of FFG. Once the mushroom cloud settles from this bomb being dropped on us, it will definitely be interesting to see how this deal will affect us as hobby consumers. For what it’s worth, I personally don’t see it as a bad proposition overall. Hooray for French companies partaking in capitalism! 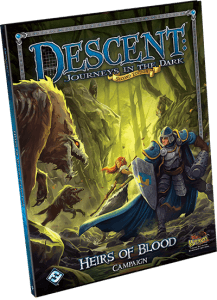 Heirs of Blood offers a climactic campaign in two acts, featuring thirty-two completely new encounters. Your adventures will take you across the realm of Saradyn, but one thing remains consistent: the outcome of every quest has consequences for the entire campaign.

In the first act, you and your fellow heroes must foil Eliza’s initial incursions into the hidden kingdom. You may battle goblins to retrieve treasure from a hidden cavern, or attempt to keep Eliza Farrow from completing an unclean ritual. When the second act begins, Saradyn is launched into open war against the dark forces and machinations of the Farrows. You may battle a rival army amid a graveyard filled with undead or seek to infiltrate the haunted dungeon of Khinn! The Heirs of Blood campaign concludes with an unprecedented, three-encounter finale that brings Saradyn’s two claimants together in a magical showdown that will determine the fate of the kingdom. Your heroes are all that stand between the rightful heir and a grisly demise.

Look for Heirs of Blood to hit your FLGS in the first quarter of 2015. 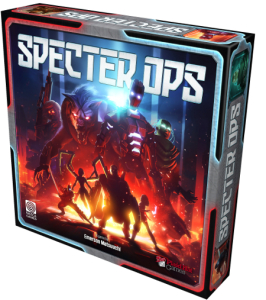 Those in attendance at BGG.con were treated to a sneak preview of Plaid Hat Games’ newly announced game, Specter Ops designed by Emerson Matsuuchi (VOLT). In Specter Ops, one player takes on the role of a secret agent of A.R.K. infiltrating a top secret Raxxon facility, attempting to complete three mission objectives and escape unharmed.  Sounds easy enough until you realize that the rest of the players are genetically modified Raxxon Hunters attempting to hunt you down!

From what I’ve heard from those who were able to demo the game, it is an awesome hidden movement game in the same vein as Letters from Whitechapel with amazing art to boot. Specter Ops is slated for a 2015 release and this has definitely just jumped to the top of my list for my most anticipated games.

In Portal Games vlog #11, Ignacy teases Why Can’t We Be Friends the first Empire Pack expansion to his hit civilization card game, Imperial Settlers. The expansion pack debuted at BGG.con this past week and will be available in the near future to the rest of us who were unable to attend. Included in the pack are new common cards for the central deck, new cards for each of the base game’s four factions, and two new cards for use in the solo game with certain factions.  The expansion also introduces one new effect on the cards, called “open production.” This provides players with the ability to visit an opponent’s building in order to acquire the resource produced there. In return, that player receives the worker that you sent over as compensation.

Also announced in the vlog, and shown in demo form at BGG.con, was Dawn Sector (previously Battle for York) a new area control battle game by Grant Rodiek. As I understand, the game will be re-themed in a sci-fi universe with warring races attempting to conquer the various areas of the board. No further details on the game or release have been given but the original Battle for York’s BoardGameGeek page gives a bit of flavor about what we might expect from a mechanics/game play standpoint.

Having just wrapped another successful convention in Dallas, the BGG.con organizers decided that once a year just wasn’t enough! It was announced yesterday that a SECOND BGG.con, called BGG.FAM, will be held for the first time in 2015 over Memorial Day weekend (same location). This convention appears to be geared towards more family gaming as children of all ages are invited, and encouraged, to attend. Badge registration is not yet open, but the Hyatt is accepting reservations, so hop on this quickly if it interests you. Stay tuned to the BGG.FAM BoardGameGeek page for more details as badge registration nears.

Tabletop Season 3 has commenced with Tokaido, Antoine Bauza’s (swoon) beautiful walk through Japan, as the first game up on the docket. Check out Wil Wheaton’s blog post for a complete listing of the games and “celebrities” that will be participating this season. More importantly, if any of these games tickle your fancy, be sure to buy them before the episode airs because, as we’ve seen in the past, the ‘Tabletop Effect’ greatly impacts the sale of these games.