AEG appears to be taking a page out of the Munchkin and Fluxx playbook with the announcement, on their Facebook page, of not one, not two, but THREE new variant re-skins for Seiji Kanai’s Love Letter: Batman, The Hobbit and a Christmas themed Letters to Santa edition. I definitely understand the idea from a marketing standpoint; adding mass appeal to a staple game has worked wonders for Looney Labs and Steve Jackson Games. As a purist, none of these particularly interest me but if this is up your alley look for these new titles to hit your FLGS shelves in early 2015. 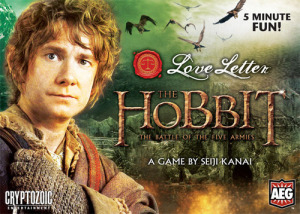 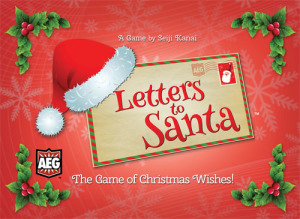 Stuck in the middle with you

In their October newsletter, Stonemaier Games announced that they will be publishing their first game from a designer not named Jamey or Alan: Between Two Cities from designers Ben Rosset and Matthew O’Malley. As described in the newsletter: 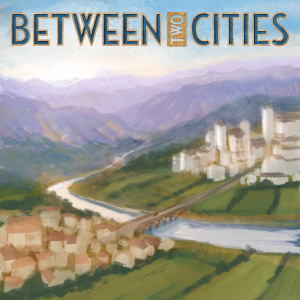 The game is called Between Two Cities, designed by Ben Rosset and Matthew O’Malley. It is a partnership-driven, tile-drafting city-building game for 3-7 players that plays in about 20 minutes. The game also includes a 2-player variant, and Morten Monrad Pedersen is working on a solo “Automa” variant as well.

In Between Two Cities, you are a world-renowned city planner who has been asked to redesign two different cities. Projects of such significance require the expertise of more than one person, so for each assignment you are paired with a partner with whom to discuss and execute your grandiose plans. Each turn features a simultaneous discussion with your two partners to decide which of your tiles to place into the cities you’re building with each of them and where in those cities to place the tiles. At the end of the game, there is only one winner, as each player compares the lowest scoring of their two cites.

Our very own Tiffany had a chance to play this at Gen Con in August and had nothing but great things to say about it. Look for Between Two Cities to hit Kickstarter in the early part of 2015 at around $30 and likely exceed $1 billion in funding.

Align your wallet with Plaid Hat 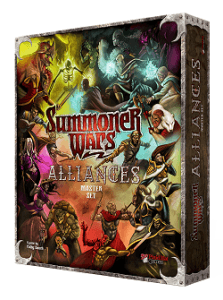 After months of previews and teasers for their upcoming Summoner Wars Alliances Master Set, Plaid Hat Games finally announced on their website that they will begin taking your money for pre-orders! In this new set, the 16 original Summoner Wars have teamed up to create 8 alliance factions. Along with the 8 new faction decks the Master set comes with a sweet neoprene battlefield, wound markers, dice and, perhaps best of all, the box itself is an all-in-one storage solution that keeps your whole Summoner Wars collection together and organized.

Those who pre-order directly from Plaid Hat for $39.95 will receive:

Be sure to head over to Plaid Hat’s website if summoning and warring are your thing to take advantage of this great pre-order offer. And look for the game to hit stores in early 2015.

Fans of Firefly rejoice…again! Next up in the onslaught of Firefly related products to hit stores is Firefly Tall Card from Toy Vault. Tall Card is inspired by the card game that was played by the crew of Serenity to pass time when they weren’t out causing a raucous. From Toy Vault’s website: 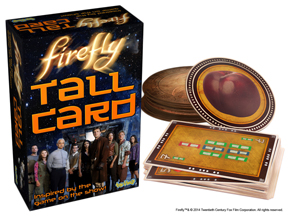 Your cries have been heard, Browncoats – straight out of the Firefly ‘verse comes TALL CARD! With rules and artwork inspired by the game played on Firefly, TALL CARD will make you feel like you’re a fellow crew member aboard Serenity! Each box includes over 45 cards, including the round ‘Tall Cards’ as seen on Firefly! Also included are more than 50 additional cards so you can create your own games and pass the hours away as you drift from planet to planet. Whether you’re just lookin’ to kill some time between jobs or you’re hoping to trade off some chores, TALL CARD is a must-own for any die-hard Firefly fan!

The game will retail for $19.99, though a firm release date has not been released. Stay tuned, browncoats!