Last week Bruno Cathala posted a blog recounting his time at the Festival des International des Juex in Cannes, France.  Within the blog, he slips in some big news regarding expansions for two of his huge hits from 2014 – Abyss and Five Tribes. 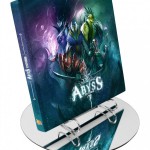 For Abyss, he mentions that we are going to see multi-colored allies, black pearls that will penalize players, smugglers, sentinels and new risk-reward “carcass” locations. We here at the League are fans of Abyss (see the Top 5 of 2014 lists from Buns, Smee, Kelly and Ben) and will surely welcome any new game play additions that will freshen up what was likely our most played game of 2014. Given that Mr. Cathala also mentioned that a full artbook containing Xavier Collette’s amazing illustrations will be available for sale in the near future, you can guarantee that the art and production will be just as impressive as the original. I would suspect both will be available in limited quantities by Gen Con. 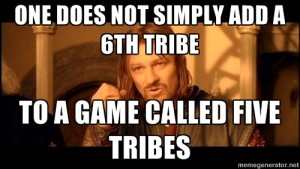 Additionally, Five Tribes will be expanding to frustrate me even more than it already does! In the works are a sixth tribe, the Artisans, who will craft valuable items such as carpets, scimitars and other fancy things for players. This sets the stage for us to take a page from Boromir’s book, however: “One does not simply add a sixth tribe to a game called Five Tribes.” That sends my OCD into overdrive! New location tiles, ones with impassable terrain such as mountains, will also join the mix. Not only will this expand your options, it will blow your mind. Seriously, impassable terrain in a game that is already AP heavy? Sigh. I will, however, give Mr. Cathala the benefit of the doubt as he’s earned it. Stay tuned for more details as they present themselves leading up to the big summer cons. 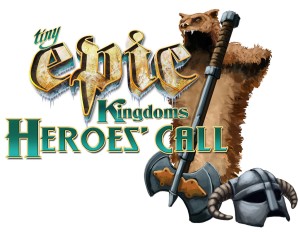 The war continues and spreads further and further. New factions have arrived from the north igniting more epic battles than before. Heroes rise over the fallen bodies of their enemies. Kingdoms spread across the frozen wastelands in search of resources. War towers grow taller than the trees. Who will be victorious in the end?

TEK HC introduces heroes to the war. Heroes will bring to play a variety of benefits unique to their class. Players will use a larger meeple to represent the hero of their faction.

Additionally, new mechanics are introduced to the building action of the game. This will have players tracking their tower progress by placing tower cubes onto regions they possess. Players are encouraged to keep these tower cubes safe because losing them in war results in a loss of progress on the tower card.

Look for Heroes Call to hit Kickstarter this summer with an anticipated release of early 2016.

Making sure your wallet does not stay in the Black(rock)

Hearthstone’s second adventure mode pits players against single-player bosses and their unique abilities that are guaranteed to put you in the hot seat.  Each boss within Blackrock Mountain has unique cards at their disposal, and they’re guaranteed to challenge any adventurer ready to brave the challenges within. A total of five unique wings make up the massive expanse of Blackrock Mountain, and each wing is a unique experience to one of the five iconic zones found within it.

The expansion will go live in April, but you can pre-order it starting March 19, which will also unlock an exclusive special card back.

Just a reminder for those interested, BGG Con registration begins Tuesday March 10th at 5 p.m. CDT (6 p.m. EST). According to the BoardGameGeek Pre-Announcement:

Exhibitors: please contact us at bggcon@boardgamegeek.com for more information