King of New York has Cosmic Encounter with D&D Dice 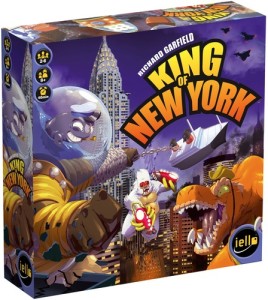 Start Spreading the News, I’ll sell out in a day

King of New York is a standalone game from designer Richard Garfield that keeps the core ideas of King of Tokyo while introducing new ways to play. As in KoT, your goal is to be the first monster to collect 20 victory points (VPs) or to be the last monster standing. On your turn, you roll six dice up to three times, then carry out the actions on those dice. Claws cause damage to other monsters, hearts heal damage to yourself, and energy is stored up so that you can purchase power cards that provide unique effects not available to anyone else.

What’s new in King of New York is that you can now try to become a star in the big city; more specifically, you can achieve “Fame”, which nets you VPs, but superstar status is fleeting, so enjoy your time in the spotlight.

The game board for King of New York is larger than in KoT with each monster occupying a district in the city and everyone trying to shine in Manhattan. When you attack, you can displace a monster in another district, whether to escape military forces or to find new smashing opportunities. Yes, smashing because you can now destroy buildings and get bonuses for doing so, but the more destruction you cause, the more intense the military response.

The monsters from King of New York can be used in KoT and vice versa, but the power cards are specific to this game.

This is good news for me as I will be able to scoop up all the other goodies while everyone else runs to the IELLO booth on the first day of the Con. 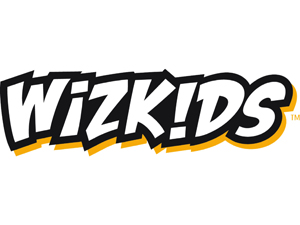 WizKids announced last week that the minds behind the hit Marvel Dice Masters, Mike Elliott and Eric Lang, are going to make a Dungeon & Dragons game using dice! Wait, what?! I know what you’re thinking, “I thought Dungeons & Dragons was already a game using dice?” Well, yes, it is but not dueling head to head combat dice like those that will be on offer in Dungeons & Dragons Dice Masters. Seriously though, It won’t be long now before Messrs. Elliott and Lang are arrested for drug dealing. These collectible dice games are like pure crack (for the record, I say no to drugs and you should to…this is purely speculation). The Wizkids announcement had this to say about the game:

We’re excited to expand our Dungeons & Dragons portfolio with the addition of Dungeons & Dragons Dice Masters.  Dice Masters is an all new game that utilizes WizKids Games’ proprietary Dice Building Game platform where players collect and assemble their “party” of adventurer dice and battle in head to head gameplay. Dice Masters has had huge initial success, is a very exciting platform and should fit perfectly with the world and lore of Dungeons & Dragons. You can expect to see some of the most recognizable monsters and characters, such as Kobolds, Beholders, Mindflayers, Dragons, Drow, and many more!

Dungeons & Dragons Dice Masters will debut in Q4 2014. They have stated that the product line will include Starter Sets, Booster Packs, Play Mats, and a Storage Box. For some reason I am most excited about the storage box. If this tickles your fancy, you should probably get your pre-order in soon to help avoid the debacle that happened with Marvel. 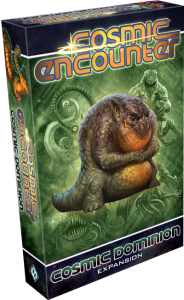 Fantasy Flight Games announced the Cosmic Dominion, the 5th expansion for the cult classic Cosmic Encounter. This one is a little different, though: it was designed by actual fans of the game (I am not one of them), in conjunction with Peter Olotka, one of the original designers. That is pretty cool! What have the fans got in store for you other fans? Well, more cards that have 4 paragraphs of size 3 font text for you to peruse and some additional variants, it seems. Hopefully they included a variant that helps you keep your friendships after the game is over. The exact breakdown of its content is described on Fantasy Flight’s website:

In this fan-designed expansion, thirty new aliens blast their way onto your tabletop. Chock full of fan-favorite aliens, wacky new powers and flares, and a brand-new reward deck, Cosmic Dominion will have you and your friends competing to determine once and for all who rules the galaxy. Four new variants allow you to modify the classic Cosmic Encounter experience, and new ship markers allow players to create their very own variants.

Cosmic Dominion will hit our universe in 3rd quarter 2014. You’ve been warned! 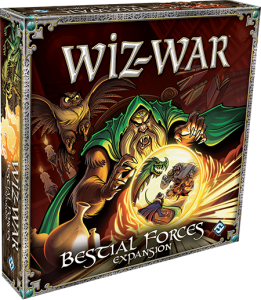 Fantasy Flight Games also announced that they will be releasing a second expansion for Wiz-War, everyone’s favorite run around a maze dueling other wizards game, Bestial Forces. For the fans of the game that have longed for the ability to summon ferocious beasts into the labyrinth alongside them, the wait is over. In addition to the original beasts included with the base game, Bestial Forces will add 6 beautifully sculpted creatures to the mix. As described on Fantasy Flight Games website:

Look for Wiz-Wars Bestial Forces to hit your FLGS in 3rd Quarter 2014.

No need to be Gloomy Anymore

If you are ever looking for a game to play in the shower I cannot recommend Gloom enough. The plastic cards are some of my favorite components ever and the game is fun to boot. According to BoardGameGeek News, Atlas games will be releasing a second edition of Gloom along with 3 of the games out of print expansions:  Unhappy Homes, Unwelcome Guests, Unfortunate Expeditions. To Understand why they are Undertaking this, Atlas states that:

“Second edition Gloom and its expansions make a host of minor improvements to gameplay and card design, such as to the timing of certain events and the way they’re recorded on the cards”. New reference cards have been added to the game, and the cards in the first and second editions are compatible with one another.

The 2nd edition of Gloom will be Unveiled at Gen Con 2014. 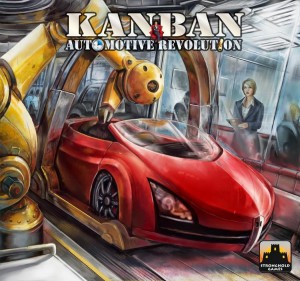 Stronghold Games publicly announced their 2014 release schedule and oh boy is it good! Among the Stars, Kanban: Automotive Revolution, Panamax, a slew of Space Cadets expansions and an expansion for my favorite deckbuilder Core Worlds. And there’s more! I want to type an excited expletive but I will refrain. Needless to say, Mr. Buonocore was not joking when he said earlier in the year that he had something special lined up for 2014. But don’t take my word for it. Head over to Stronghold Games website and check out the schedule for yourself. Start saving! 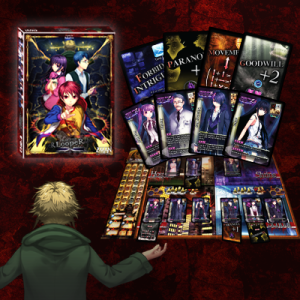 And keeping with the release schedule announcements, Z-Man Games sent out their upcoming releases in the June 2014 newsletter. On tap for Origins, they have Enigma and Chinatown, followed by pre-released copies of The Battle at Kemble’s Cascade, Pandemic- Contagion, Tragedy Looper (one I am personally itching for) and Chimera. A strong showing as well!

Until next time, stay classy and keep your game(s) tight! And if you’re going to Origins, please be sure to let us know so we can game.