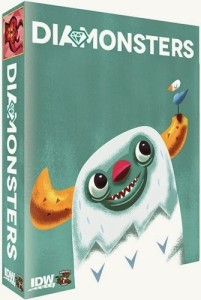 IDW’s games division has been busy lately. With Machi Koro already atop many people’s must have list, IDW and Pandasaurus look to strike while the iron is hot, bringing another of Masao Suganuma’s designs, Diamonsters, to the U.S. market. From the BoardGameGeek page:

In the card game Diamonsters, each player starts the game with an identical hand of cards, each of which has a cartoonish picture of a monster and a value from one to five. Each round one card is dealt from the deck face up. Some monsters are more valuable than others, and some eat the diamonds found on other cards. Players attempt to win the round by playing the highest card in front of them, but cards of equal value cancel out. The winner of each round adds his winning card — plus the face-up card — to his collection of cards won. The first player to collect three cards of the same value or five diamonds wins the game.

Look for Diamonsters to be released to U.S. FLGS in November 2014.

IDW, in conjunction with Rob Daviau and Jonathan Maberry, have announced a new V -Wars board game based on Maberry’s popular comic of the same name. Don’t get too excited Twihards, there are no mopey teenage girls or steroid induced over-actors in this series. These vampire tales are much more adult (and much better written).  From the publisher:

V-Wars is an intense battle for inter-species dominance, designed by Rob Daviau (Risk Legacy, Betrayal at House on the Hill) and based off the series of novels and comics by John Maberry. In the game, players will join the war as either a human or a vampire, working toward completing missions that will change the tide of war. However, they’ll have to be careful in who they trust, as exposure to the ice virus could cause players to change sides mid-game. In the world of V-Wars, alliances are temporary, but blood is forever! 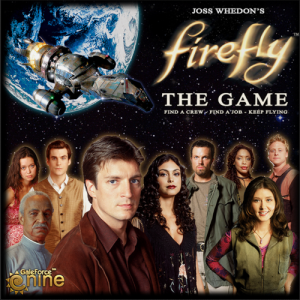 Games Quest’s Tom Randell, reported last week on his blog a number of interesting Gale Force Nine updates for product hitting your FLGS between now and February 2015. First up, fans of the Firefly board game and collectors in general will be excited to know that GF9 will be releasing new resin ships for all of the existing in-game ships. These can be swapped in or left in their sweet collector’s case to sit proudly on your shelf. GF9 will also be releasing ship dice for each ship in the game; complete with matching color and emblem.

Mr. Randell also goes on to mention that Sons of Anarchy will likely debut at Gen Con this year and Homeland’s Carrie Matheson looks to bring her crazy ass self to our table in November. Her character in that show seriously frustrates me. I don’t think I have ever watched an episode of Homeland with out shouting, at least once, “Are you stupid?!” at my television. I hope the game offers a bit of reprieve. 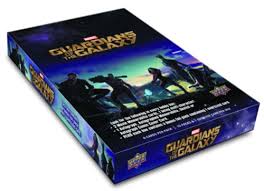 Raccoons and Brown Coats in Space

As anticipation builds for the Guardians of the Galaxy summer blockbuster to hit theaters this week, BoardGameGeek News is reporting that Upper Deck Entertainment has announced that the Guardians of the Galaxy expansion for Legendary will be released in October 2014. Like the other small expansions to come before, this one will include 100 cards comprised of 5 new heroes (Gee, I wonder who they are?!), 2 new villains and villain groups and some additional schemes.

Upper Deck Entertainment also announced that the Firefly Dice Game, from Scott Morris of Crits Happen, will be released in November 2014. As described on its BoardGameGeek page:

Firefly Dice Game lasts three rounds, and whoever has the most points after three rounds wins. In each round, each player takes one or more turns. On your first turn in a round, you roll all fifteen dice — seven crew dice (blue), three passenger dice (white), and five bad guy dice (red) — then place them in the appropriate places on your display. Crew members and passengers all have unique abilities, some of which involve the option of rerolling dice.

After any rerolls, you reveal your mission for the round. If you have dice on your board that match the numbers given at the top of the mission, then you’re unaffected by the bold line — Bushwhacked, Gorram, etc. — immediately underneath. Otherwise, you might be forced to end your go after the current turn, forced to take an additional turn, or affected in some other way. After revealing and resolving the mission, the bad guys strike:

After this, you then use any remaining crew and passenger dice to defeat the bad guys, which generally require one point of damage to defeat. Remove them all, and you score 1 VP for each type of bad guy defeated, with half-points for each supply delivered; fail to remove them, and you score no points for the defeated bad guys. If you clear the turn, you can opt to take another turn — rolling all the bad guy dice and all non-KOed crew and passenger dice — or end your turn. If you opt to continue, but then fail to defeat the bad guys, you lose all the VP that you earned previously on that turn.

After three rounds, whoever has the most VPs wins

In my opinion, the more Firefly the better! Keep em coming! 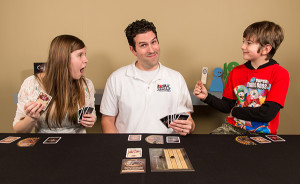 What the game is all aboot

The Godfather of rules explanation and the friendliest Canadian I’ve ever watched on YouTube, Rodney Smith, from the popular web series Watch It Played, has launched an IndieGoGo campaign to help fund their 4th season. For those of you tasked with reading the rulebook and explaining the game on gamenight you understand how valuable the service Rodney provides is. His videos are crisp, clear and streamlined, making your job that much easier.

Boardgame: $60; Gamenight snacks: $20; The feeling when you realize Rodney has a video for the game you just bought: Priceless!

If you’d like to help him out, check out his campaign page over on IndieGogo. There are a ton of awesome backer rewards including promos for upcoming games Dead of Winter and XenoShyft. 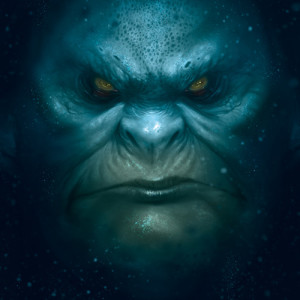 According to BoardGameGeek News, Asmodee has publicly released its list of games that will more than likely make their debut at Gen Con in two weeks. Fear not, for those not attending the mad-house that is Gen Con, you do not have to wait long to receive some of the hottest titles of the summer: