Tabletop Returns to the Ruins of the Mage Wars

It’s back…hopefully? Yes? Maybe?  Fans of the web series Tabletop hosted by Wil Wheaton on Geek & Sundry’s web channel will be glad to know that the possibility for another season of TableTop is very close to reality. It’s all down to you…the fan! An IndieGoGo campaign was launched on TableTop Day (convenient, right?) to crowdfund the upcoming Season 3.  Feelings for Wil Wheaton aside, Tabletop is a great show for both experienced and novice gamers alike. The funding goal is a lofty $500,000 (which as of this posting, I believe has been reached) to produce 15 episodes featuring 15 new games.  If $750,000 is reached they will tack on an additional 5 episodes for a total of 20. Is it just me or does this seem extremely expensive? But hey, I don’t know anything about show biz. If you’d like to find out more and/or donate, visit their IndieGoGo page and check it out!

What happened to Puerto Rico?

Portal Games has announced Ruins, a new expansion for 51st State and its standalone expansion, The New Era, from story-telling designer extraordinaire Ignacy Trzewiczek.  For those unfamiliar with 51st State, it’s a card game in which players try to build their own new country; placing new locations, hiring leaders, and sending people to work in buildings to gain resources and new skills. Ruins provides players with forty additional Leader, Location and Contact cards and new card abilities for cards

Ruins is due out in April 2014 and Portal has hinted that more of these smaller expansions will be available in the future.

There is Z first for everything

Z-Man games announced that for the first time ever you will be able to pre-order a game on their website.  The lucky privilege of being the first goes to their highly anticipated reprint of the beloved Hans im Gluck game, Vikings, from designer Michael Kiesling.

In Vikings, you are tasked with the scouting and settling of undiscovered islands off the coast of the mainland. To expand your territories and clan, you will need to master the game’s clever rotating wheel. The price for islands and Vikings will change as players acquire more of them. The game will be tense until the end, and you will need to protect your islands against the ships that sail on the horizon. Are you the leader whose clan will rise above the others?

The official store FLGS release date for Vikings is May 21st but Z-man has promised all preorder copies will be shipped on April 22nd! That’s a whole month ahead of retail distribution for those not sitting in front of a calendar. Awesome! Visit Z-man’s website and place your preorder by April 19th to get in on this offer. 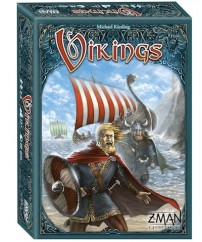 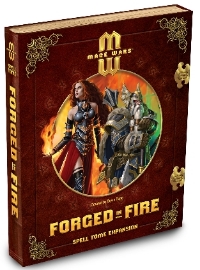 Mage Wars is on Fire

Arcane Wonders announced plans to release Mage Wars: Forged in Fire, a new spell tome expansion for their hit game Mage Wars.  The new expansion will introduce players to two new alternate mages: The Anvil Throne Warlord and the Adramelech Warlock. Along with the two new mages, you will receive 41 new spells across 158 spell cards.  Preorders for Forged in Fire placed before April 30th will also receive two promotional cards.  For additional information and card previews check out Arcane Wonders website and Facebook.

For additional details on both ships and their impact on the game visit StarTrek.com and WizKids.com.

Rise of the PHG

This past week Plaid Hat Games was accepting playtesting applications for Isaac Vega’s upcoming Ashes: Rise of the Phoenixborn.

Ashes: Rise of the Phoenixborn is a two-player expandable card game. Players will take on the roles of Phoenixborn, powerful magic wielding demi-gods. Using their powers, and the allies they control, players will battle each other until one remains and the other falls to ashes.

It appears Plaid Hat is again “throwing its hat” in the ring of the expandable card game format that has grown in popularity over the last few years. PHG is building a reputation for producing quality products and I look forward to any new products they put out. For more details check out Plaid Hat’s website.

Canada is a loft apartment over a really great party

If you ever needed a reason to leave the country and join our neighbors to the north, look no further.  Canada has become a hot bed for soft iOS application launches prior to their release here in the ol’ U. S. of A.  This time around I am slightly jealous as the Hearthstone: Heroes of Warcraft iOS app was soft launched this past week in Canada and Australia. One can only hope that a US release is not too far behind. As a devout follower of my iPad, I cannot wait to get my hands on this application. As mentioned in a previous news post, all of us here at The LoNG really enjoy Hearthstone and if you’re ever looking for a game look us up (our usernames are listed in the post I just referenced).