If you head over to the official Speil des Jahres website (and turn on your Google Translate), you’ll see that the result are in and Geister, Geister, Schatzsuchmeister! has won the 2014 Kinderspiel des Jahres. The official statement from the Speil des Jahres jury, as reported by BoardGameGeek, reads:

“[the designer] creates a ghostly atmosphere that inevitably draws you into the game… At the same time, the game bridges the gap between generations. Thanks to the variations that can be introduced gradually, the challenges continue to grow — and with them the player.”

The game beat out its two competitors, Richard Ritterschlag and Flizz & Miez, to receive one of the most prestigious awards that this hobby can offer. We now turn our eyes to the other two award categories, Family Game of the Year and Strategy Game of the Year. Stay tuned.

Scott Almes’ newest designs, Tiny Epic Defenders and Harbour have taken Kickstarter by storm, grossing roughly 600% their required value each. On top of that, each project has just under one month (~20 days) remaining in their respective campaigns. Both of these microgames can be yours for less than your average retail game purchase and they boast widely different experiences.

Defenders is the sequel to the very successful Tiny Epic Kingdom and offers a cooperative questing experience for 1-4 players. Harbour hits the other end of the spectrum, a euro-based, resource management, trading and building game.

Though being produced by different companies, both games feature slick art and will likely accrue piles of add-ons, bonuses, and upgrades, as stretch goals continue to be unlocked. For less than your monthly coffee budget, these two might be worth a look. Both games also offer a Print-and-Play option for more cautious backers.

Intergalactic Truck Stop to be Completed in September

David Neumann of BoardGameGeek’s App News reported over the weekend that Czech Games Edition has officially announced a release date for the Galaxy Trucker mobile app. Fans of the deep space madness can look forward to a completed version in September of this year.

He also featured a number of screenshots, showing just how sharp this game is going to look. While I ponder how I’m going to play this without accidentally flinging the iPad across the room, head over to BGG and take a look. 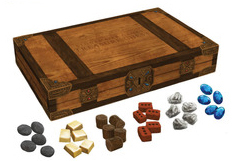 Hitting Kickstarter this month is the Stonemaier Games Treasure Chest, a set of realistic premium-grade resource tokens to be used with whichver game you choose.

Don’t let our title fool you, these appear to be some of the shiniest add-on components available for purchase. Using the Deluxe Edition of Euphoria, also produced by Stonemaier Games, as a benchmark, these could easily be a must-have for those inclined to upgrade their games.

An added boon is that the crew at Stonemaier are behind this project. Any short amount of research into the company will reveal that the company takes a very mindful approach to their Kickstarter campaigns. If you’re willing to shell out for this set, rest assured that you’re in good hands.

Prepare to be Among the Stars

For those  itching to leave 7 Wonders behind and start building their own masterpiece in space, the official pre-order for Among the Stars, now published by Stronghold Games, is open. Early supporters will receive the benefit of 30% off the MSRP, as well as guaranteed shipping before retail purchasers.

As hinted at above, Among the Stars is somewhat of a cousin to the popular 7 Wonders, as you similarly draft tiles to earn victory points and gain special abilities. The intergalactic alternative adds a spacial element though, as you carefully choose exactly where to place the specific features of your space station. We’ve really enjoyed our plays of Among the Stars and this looks to be an excellent opportunity to get in on the fun.