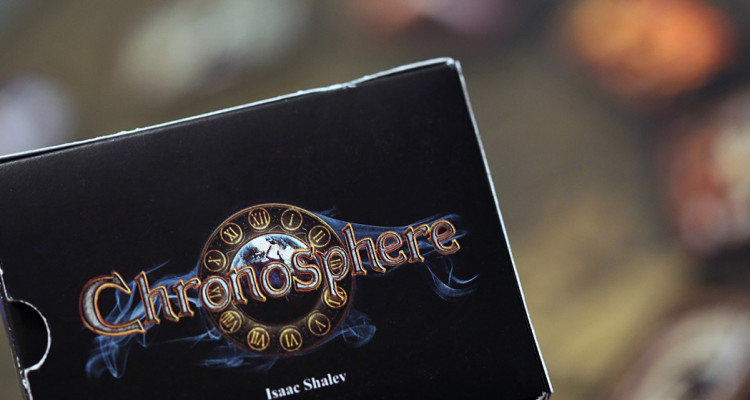 “THOSE WHO CANNOT REMEMBER THE PAST ARE CONDEMNED TO REPEAT IT.”

You and your friends are historians, trying to piece together the past to understand the world as it was, but you can’t recall if it was the chicken or the egg that came first. Rearrange the past incorrectly and you have to start from scratch, trying once again to decipher discoveries and happenings that your ancestors experienced.

ChronoSphere is a card game for 2-7 people that incorporates trivia and bluffing as players work to recreate the chronosphere. The game was designed by Isaac Shelev with art and graphics from Will Ilkow. It is the first project being published by Kind Fortress and is currently campaigning on Kickstarter. Through card placement, bluffs, and challenges, players compete to be the first to rid themselves of their cards or to create an accurate chronosphere and restore history! 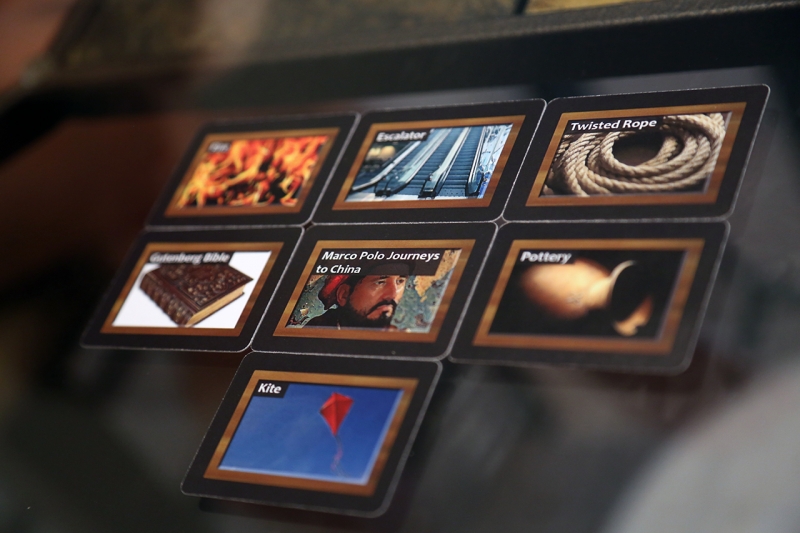 ChronoSphere contains over 100 miniature cards that represent inventions and events across history. Each card features two sides: face-up and date-side. Both sides of each card feature representative artwork and graphics and the name of the invention, person or event. The date-side also features the year in which the invention or event occurred. The dates for people are sometimes quite vague, though: one card lists specifically “the birth of Jesus Christ,” whereas there is another card that lists simply “Attila the Hun.” The prototype’s artwork is not groundbreaking, much of it appearing to be basically stock images, but that doesn’t mean it isn’t useful to some extent. I found that much of the artwork is quite deceptive as it depicts more modern versions of the items featured. For example, the image on the “mobile phone” card is of a collection of iPhones. We all know that iPhones are far from the first mobile phones, but this imagery forces players to stop and assess the cards they are playing. This mechanic can be useful in the bluffing aspect of this game, especially for more persuasive bluffers.

Each player is dealt seven cards, and then the first and second player receive an additional, eighth card to begin.  Players arrange their cards with the date-side down (no cheating!) on the table in front of them.

Play will take place on the ‘chronosphere’, an imaginary circle with slots for twelve different cards, six of which will be utilized for B.C. dates, and the other half-dozen for A.D. A diagram of this circle is depicted in the rule book for easier visualization. Kind Fortress is working on a playmat, to be available through the Kickstarter campaign, that will help maintain a perfectly round and evenly spaced chronosphere during game play. 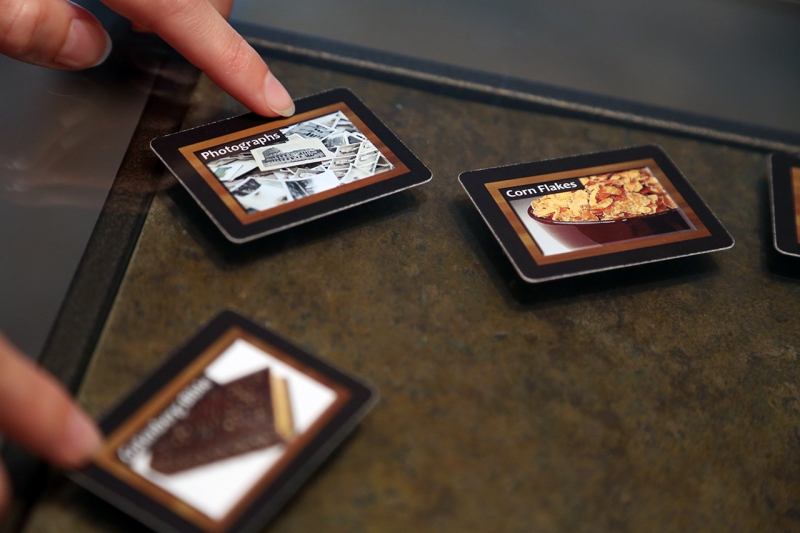 Gameplay continues through these three turn options until someone is ready to place their last card, the chronosphere is full, or the deck of cards runs out. 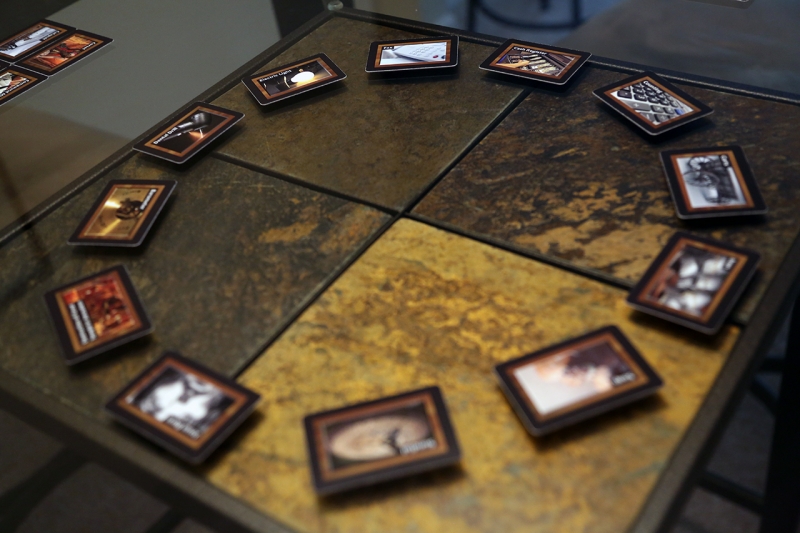 ChronoSphere is a clever game reminiscent of Timeline. It adds a little bit more competition to a similar game by way of introducing bluffing and challenge mechanics. Whereas in Timeline, players place cards independently and without consequence to their competitors, ChronoSphere creates opportunity for fiercer direct competition. Further, ChronoSphere leaves players on the hook for a little while longer through the mechanic of challenges affecting the last player to have played a card.

The content of the cards can be quite difficult, unless you happen to be a history buff. When we flipped over cards we often found ourselves truly baffled by the dates listed on the cards. Did you know that the flushing toilet was invented some 2000 years B.C.? I didn’t, but you better believe I googled the heck out of that to find that when you run water across where you use the bathroom to flush it into a nearby (disgusting) river, it counts as a flushing toilet. You go, Egyptians! Sometimes it’s hard to utilize the bluffing mechanic when you truly have no idea when something was invented or occurred. Generally, though, no one else has a clue and it becomes a game of confidence and conviction.

I am not the greatest at Timeline, or history class, or sometimes just remembering things, so I was not exactly super-thrilled at the concept of ChronoSphere. I did enjoy playing it a lot more than I expected. It was hard, don’t get me wrong, but I found myself having fun and learning at the same time because I just couldn’t believe what these cards were telling me. Particularly the B.C. cards which had me repeatedly stumped because I just did not realize how old some things were (e.g. the flushing toilet, see above). The bluffing component leaves a little to be desired in that much of our gameplay was simply hoping we had the right timeline. We weren’t really bluffing as much as crossing our fingers that we wouldn’t be the victim of a challenge. ChronoSphere doesn’t jump to the top of my playlist, but as a light, filler game, I would definitely be interested in checking it out with larger groups and/or new people, especially as I get a better grip on the order of history.

Whether or not ChronoSphere hits home for you as a gamer will depend solely on how you feel about historical sequencing games because, at the end of the day, that’s all this game is. After playing several rounds, ChronoSphere is, in my mind, just “Timeline 2.0.” The introduction of the bluffing mechanic, for our group at least, was never shown in force because we simply didn’t know enough of the obscure events and inventions to make a meaningful attempt at deceiving our opponents. Yes, the ability to be challenged ramps up the tension, but that’s only because you’re thinking “I hope I get away with this…” for the next few turns. But, again, not in a way that is intentional deceitful, more accidental and haphazard.

It’s a unique spin on what many gamers consider a typically boring and played out style of game, I give ChronoSphere that. It does feel more game-y. More complex. Unfortunately, I’m not sure it actually is. If you dig this style of game, ChronoSphere may mix up your game night in a good way. For me, I’ll just look into buying a few more versions of Timeline. The light nature and “instant-fail” style of gameplay is more straight forward and easier for a wider breadth of people to engage in and enjoy; that’s all I’m looking for from my filler games.

I am borderline horrible at trivia games yet they are one of my favorite activities. I love filling my brain with trivial nonsense that may or may not benefit me down the road. Naturally, a game with the tagline “Bluff your way through history” would grab my attention.  As my colleagues have alluded to, it’s hard not to play Chronosphere without comparing it to a game like Timeline. There are some welcome differences though. The ability to rid your tableau of a card by bluffing is always welcome in my book. One word of caution, the events/people/places in this game are not easy and the most savvy history buff would probably only know a fraction of the correct dates without multiple plays. For our games it was less an exercise in bluffing and more an exercise in mitigating our own stupidity. This gave the challenges an extra dimension of tension as a majority of the time the player who played the card wasn’t even sure if he was correct or not.  This also brought a supplementary social layer to what is essentially a trivia game and I found it extremely entertaining; although most of the laughing at the table came at the expense of my history knowledge (unless Steebin was playing—then I was off the hook).

Aesthetically speaking, I will not comment on the art direction as this was a prototype and the art is not 100% final. However, the pictures used do lend themselves a bit to the bluffing aspect of the game as there is some card art that is completely deceiving. One example, Cosmetics, showed a modern make-up artistry set (maybe it’s Maybelline?) however, upon further review we found out that Cosmetics were technically invented before Jesus was born.

ChronoSphere, at its core, provides a really enjoyable twist on familiar trivia and press-your-luck style filler games. The added layer of bluffing and deception makes it less about knowing when ice cream was invented, and more about staring your friends straight in the face and confidently telling them it came before the wheel.

P.s. – Making a circle with 12 tiny cards is a lot harder than it looks!

All of the other league members have said that this game was like Timeline but with an added bluffing twist. I have never had the opportunity to play Timeline to make a comparison therefore, ChronoSphere was unique for me as far as concept and gameplay. I wasn’t excited by the premise of the game when being taught how to play, but I enjoy history and games (of course) so I went in with an open mind. In the three plays that I was able to be a part of, everyone was laughing and typically having fun (usually at my expense). To me, this is what makes this game good.

The bluffing aspect was more ‘can-I-get-away-with-it’ by testing the intelligence of the other players. Usually, I came up on the short end of this stick but that’s okay because it’s what made it fun and had us laughing. The game itself could be prettier; possibly using better images to represent some of the events/inventions on the cards (although, it does help you bluff in some cases). ChronoSphere excels at being a very casual, party game that invokes social discussion and interaction and will allow you to get a kick out of your friends’ ignorance of historical events.

ChronoSphere is billed as an ‘easy-to-learn quick-playing pub-style card game’ and on the face of it, they’ve succeeded admirably in this goal. This is a game to be enjoyed over beer and pretzels or between other games when you need a quick laugh. Admittedly, that laugh will likely be at the expense of your own knowledge, but unless there’s a history buff among the group, everyone should be on an equal footing.

Contrary to Buns up above, I rather enjoyed the ‘can-I-get-away-with-it’ aspect of the face-down placement as opposed to having to get it exactly right in Timeline. I’m sometimes amused by leaving a ticking time bomb such as ‘The Invention of Logarithms’ someplace where they’ll either have to challenge, or accept it and get challenged in turn. One of the bigger issues I had with the game, however, is that a number of the cards could be interpreted very broadly, leading me to wonder just what application of the pictured technology or theory they’re asking for.

All in all, I can award ChronoSphere a single thumb in the Light Games category.

The League of Nonsensical Gamers would like to thank Kind Fortress for kindly providing us with a prototype of ChronoSphere for this preview.

ChronoSphere is currently funding over on Kickstarter. If this game piques your interests, head on over to the campaign page by Aug 20, 2014 to grab your own copy. For $16, you receive a copy of the game along with all reached stretch goals.