Arkwright is a title that puts you on the brink of England’s Industrial Revolution and asks you to create a profitable portfolio from four bustling industries—bread, shirts, cutlery, and lamps. It revolves around a delicate balance of goods quality, appeal, and demand, as all three will interact to provide you the opportunity to increase both your liquidity and the potential stock value of your manufacturing conglomerate. 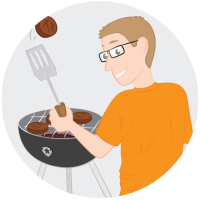 It is also terrifying.

It may be the 81 individual gray worker pawns, nicely lined up on the center board; it may be the three, yes THREE, 20+ page rulebooks that are found in the 4-inch-deep box; or it may be the fact that the beginner game—the one that is stripped of most of the complexity and is basically a tutorial—still lasts two hours and has you doing more mental calculations than a 30-person birthday group that just got their Chili’s tab on a single check.

As suggested by the rulebook and every reviewer who has ever attempted to tackle this monster, we dove into the “Spinning Jenny,” Arkwright’s beginner mode, which cuts the total number of rounds down from six to three, tosses the lucrative “shipping” option out the window, and removes any semblance of customizability and asymmetry. In our 3-player game, we started with two factories each, deliberately placed in direct competition with one other player for both industries.

My biggest concern going in was learning the rules, with its multiple rulebooks and pages of caveats and explanations, but I was pleasantly surprised. It took a bit to get through, yes, but our dumbed-down version left us with only six primary action options and a few mechanical intricacies to remember. The core of Arkwright is more than manageable; everything revolves around improving your factories, putting people in them to produce goods, and making those goods as profitable as possible. The real trick to the game is actually figuring out how to efficiently do those things, a task that I failed to accomplish in my two hours of paralyzing arithmetic.

My cutlery left the factory scuffed and most of the shirts I sold didn’t have buttons…
What I came to realize halfway through my play was that the “Spinning Jenny” is not the full game (duh!), and as such certain options make more sense in its quick, three-round burn, where they wouldn’t necessarily in the full “Waterframe” version. Specifically, my efforts to lower my overhead and optimize my profits were better suited for a longer game. I poured higher up-front costs into machinery that would cost less to maintain. I also increased my profit margins, but lowered my overall goods sale potential, giving me more money per item sold, but fewer sales in total. In the three rounds we played, I was unable to see these choices come to fruition, as a more brash strategy of high output, moderate prices, and annoyingly needy human workers created more stock increases early and enough cash payouts to just barely stay in the black.

The other fact I came to realize, thanks to my poorly thought out plan, is that Arkwright is not terribly forgiving. It’s not impossible to shift gears, but a mistaken investment can breed problems and set you behind someone being more careful. Still, it provides a satisfying amount of control over your industries and it’s this almost sandbox simulation that is so engaging. The analysis paralysis can become consuming as you tick through countless iterations of prices, upgrades, hiring and firing options, and more, however.

And now remember, this is the baby version.

I did terribly with my first shake at Arkwright. My cutlery left the factory scuffed and most of the shirts I sold didn’t have buttons because I couldn’t pay my employees, but I had fun. More fun than I thought I would, and I went in nervously excited. It’s a big, demanding, time-consuming game, that is so plain and dry and manageable at its core. I actually thought, but didn’t dare suggest, to play it again right after we finished.

Hold on to your butts!