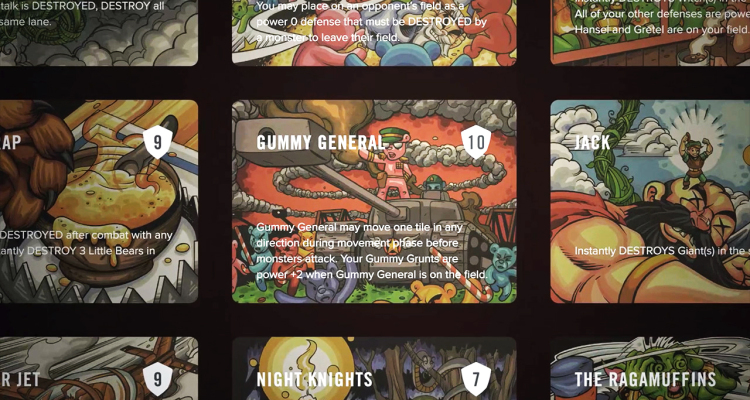 As the proud owner of a brand new gingerbread house, you could not wait to move in! Only a few days in, though, you start to realize that your real estate agent, Rumpe L. Stiltskin, may have lied to you about the neighborhood. Looking outside the window, you are appalled to see a neighbor’s house being eaten (literally!). As you frantically scour through your contract to find a refund clause, reality sets in. You’re stuck!  Plans for that backyard hot tub go out the window as you must prepare to defend your house against the impending onslaught of the witch’s minions. Hurrying to the basement, you exclaim in your best 8-year-old boy’s voice “This is my house, I have to defend it!” 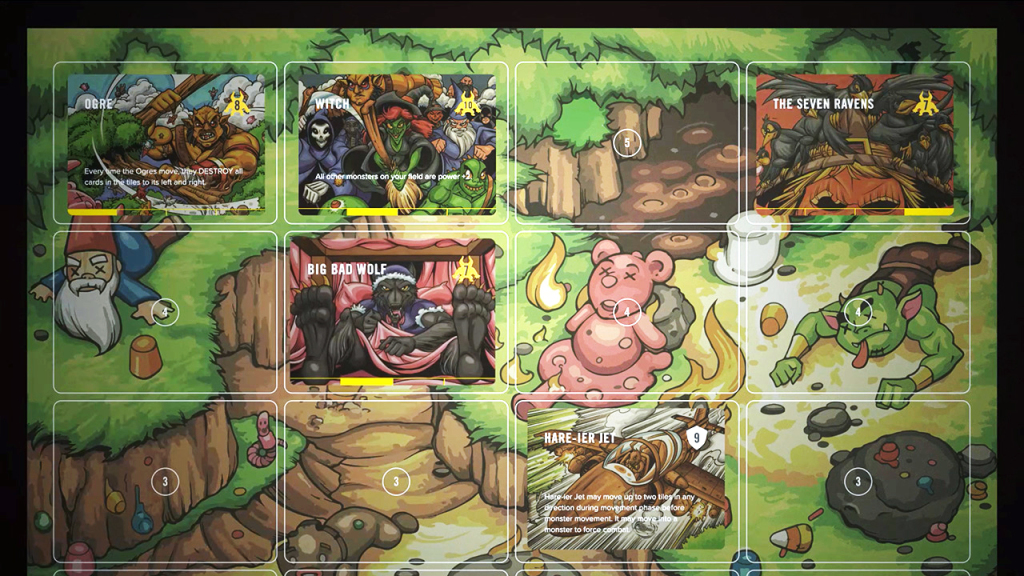 Gingerdead House is a tower defense card game for 2-4 players from first time publisher We Make Games (at least they aren’t lying). In this game you are in a race with (and against!) the other players to defend your yard from the blitz of monsters trying to eat your house.

The colorful, cartoony artwork in Gingerdead House is splendid. Each card hilariously depicts various characters from classic fairy tales with a couple of new twists thrown in (i.e. gummy bears). Powerful defenses and traps are available at your fingertips, but devious and sometimes downright nasty tricks can be played against you by your opponents, and you might find that your gummy army wasn’t quite as loyal as you thought.

Each player is given a 4×5 player board and a personal deck which contains identical defenses and tricks. Before the game begins you will draw cards from the top of your deck until three defense cards have been revealed. Place these starting defenses on your board as you wish, replace any unused cards and reshuffle your deck. Draw five cards and you’re ready to kick some Big Bad Ass!

There are five phases that make up each turn:

Play continues until there is only one gingerbread house left on the block and everyone else is gingerdead! 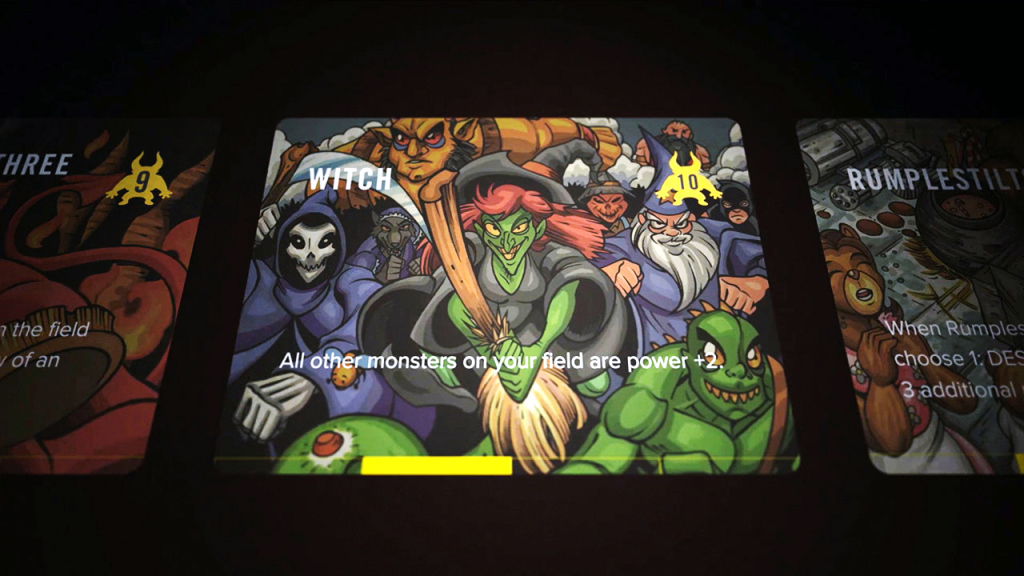 Don’t let the “childish” theme fool you; this neighborhood you’ve just moved into is not for the faint of heart. In a conversation with designer Jonny Rivera, the goal for this game was to give players a highly social and interactive experience with plenty of “Oh Crap!” and “You’re a Jerk!” moments. Well, mission accomplished!

The game is extremely confrontational with “take-that” cards played by your opponents on nearly every turn. Add on top of that the event and monster decks which lend a completely random feel to the game and you have a recipe for alienating more hardcore strategic gamers. There is a small amount of strategy to this game; for instance, the placement of your defenses to properly protect and/or trigger according to the upcoming monster movements. This foresight only really comes into play on your current turn because, for the most part, any tactical maneuvering of your defenses will likely be negated before your next turn due to the chaotic event draws, monsters or tricks lurking in your opponent’s hands.

The win condition, as mentioned, is last man standing, so naturally putting two and two together you’ve realized that there is also “The Mechanic That Shall Not Be Named” (i.e. player elimination). Luckily for you, Gingerdead House is relatively quick, and the social nature of the game lets you sit back and enjoy the suffering of your friends. As more and more players are eliminated, fewer targets exist, and the events, monsters and tricks tend to snowball; easily overwhelming the ill-prepared and coincidentally serving to reduce the wait times of those who have already lost their precious gingerbread house.

Even with all of that, the whimsy of the eye-catching fairytale artwork helps take away any animosity or resentment you may harbor in other games founded in direct conflict.  The game stirs up plenty of banter between you and your friends and most of the time it’s hard not to crack up as the Gummy Bear General instructs his troops to destroy you. You will never look at a Haribo in the same way after playing Gingerdead House. The bottom line – this game is fun! 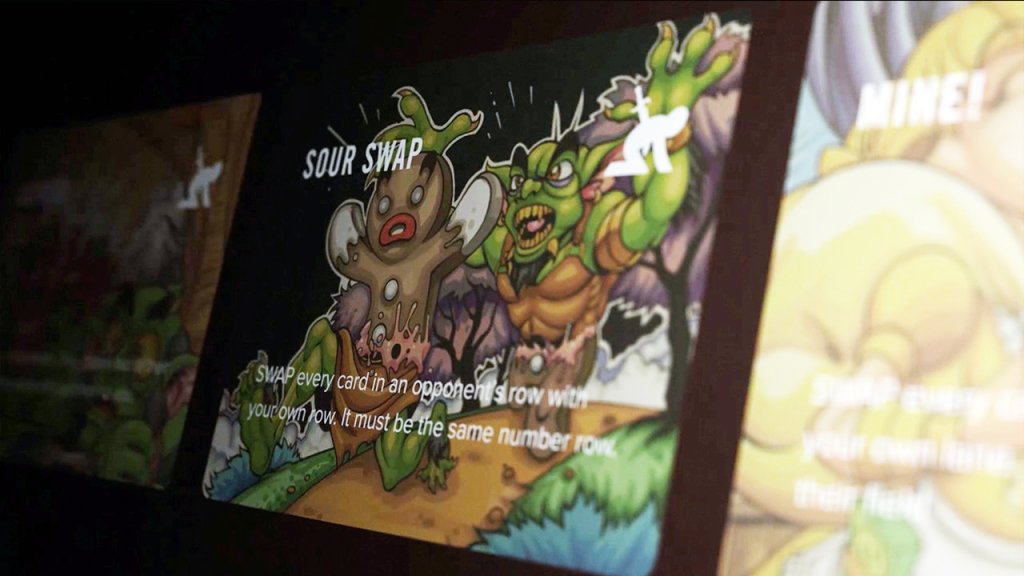 Gingerdead House provides you and your friends with an amusing romp through the evils of the Grimm Fairy Tales. While mechanically solid, outside of the awesome artwork, there is nothing revolutionary about the game. Happily, the game does not act as if it’s anything more than a quick and wacky conflict driven tower defense game, so that’s ok. I am a huge fan of digital tower defense games, and I believe the designers have done an excellent job capturing the essence of the genre with the constant barrage of threats aimed at you from both your opponents and the game itself. This game is not for everyone, but if you can stomach the take-that style and player elimination, then I would definitely recommend you give this one a shot. The quirky theme, great art style and ability to shoot your enemies with a Gummy Bear make for a very campy night in the woods!

Chocolate rabbits flying Hare-ier jets, malted milk-ball minefields, and gummy-bear grenadiers are just some of the sugar-overdose-inspired defenses you’ll have available to you to fend off the approaching hordes in this game. While I’m not a huge fan of direct-conflict games that aren’t two-player battles, in general, this particular title is a center of caramel-covered ‘take that!’ nuts smothered in a nougat of whimsy and a dark-chocolate shell of delightfully morbid artwork and theme. It’s really hard to take defeat personally when you’re drowning gnomes in a cauldron of molten fudge, so I’ll give Gingerdead House a cautious thumbs up.

The first thing that attracted me to Gingerdead House was the artwork and theme. Once I had a chance to sit down and appreciate the sense of humor in the art and the magnificent puns, I was sold. The game plays like a tower defense game; you have no idea what your opponents or the monster deck will throw at you on any given turn. The game is heavy on player interaction and offers plenty of opportunities to foil or steal your opponents defenses. The randomness makes it hard to strategically place defenses because they can easily be wiped out by the next player before your next turn. I also feel this game will scale well as a 2- or 4-player game. We played a 3-player game and while we didn’t like the player elimination element the game did speed along towards the end. I will definitely be demanding We Make Games take my money!

The League of Nonsensical Gamers would like to thank We Make Games for kindly providing us with a prototype of Gingerdead House for this preview.

Gingerdead House is currently funding over on Kickstarter. If this game piques your interests, head on over to the campaign page by November 13, 2014  to grab your own copy. For $39, you receive a copy of the game along with all reached stretch goals.