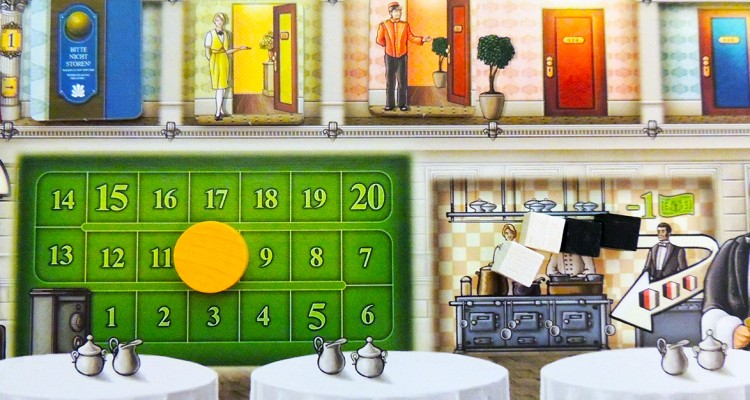 In the early 20th century, amidst the hustle and bustle of Vienna, the capital of Austria, a few small cafes are competing for customers. Among the clientele are artists, politicians and tourists all looking for the best place for a bite to eat and a comfortable night’s rest. This is your chance to show everyone how your establishment is an exquisite location worthy of the emperor himself. You must pick the right staff and offer the most delectable dishes to woo the passersby into staying at your hotel for a night or two. Be sure you have a room available for these honored guests, or your rivals may swoop in and take all of the glory! 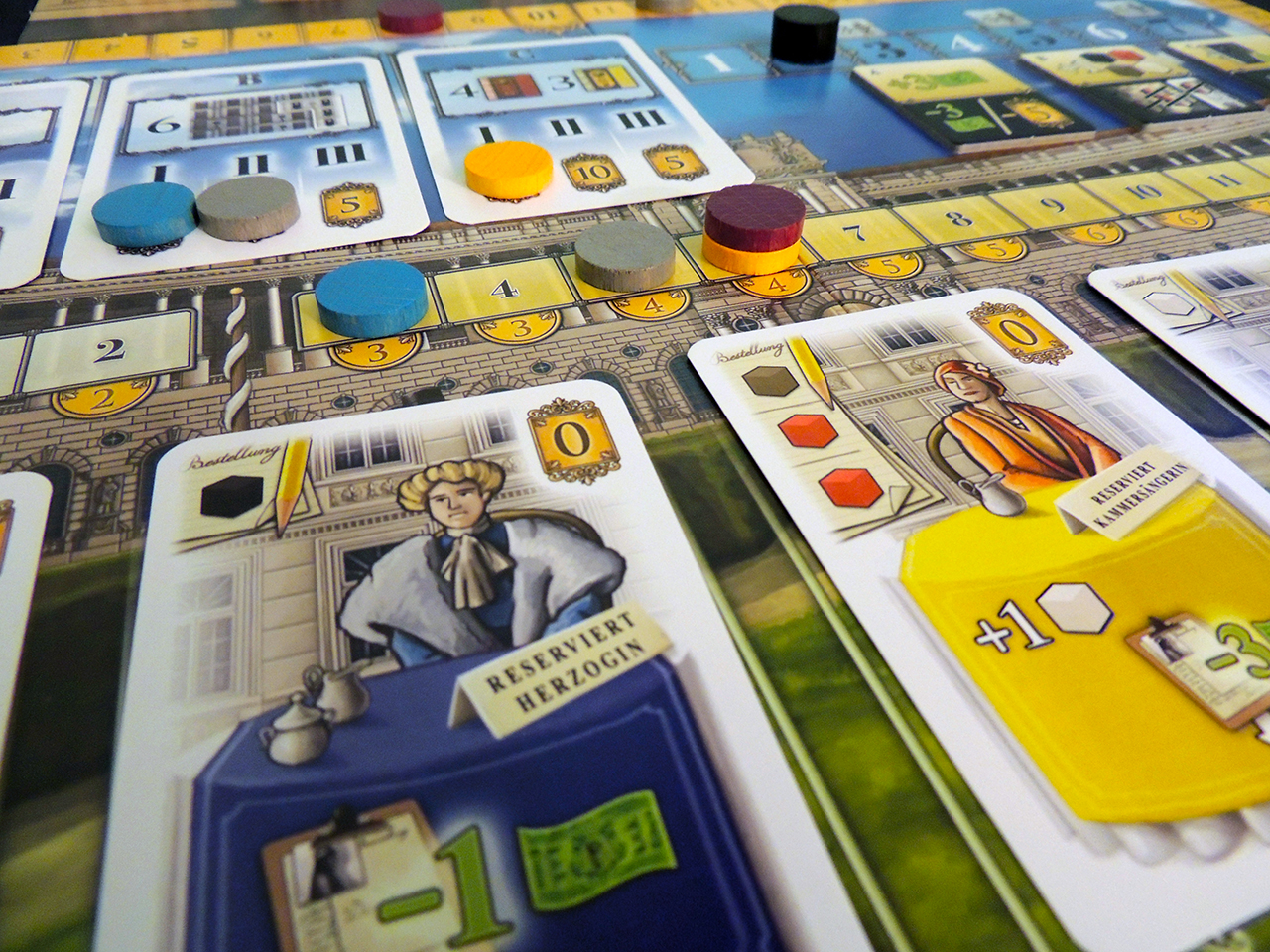 Coffee, Wine and Strudels, Oh My!

Grand Austria Hotel offers a chance for players to take on the role of a budding cafe owner in turn of the century Vienna. The game uses a dice drafting mechanic to select your actions, cards for customers and staff, and a personal hotel board for tile placement. These mechanics are blended together to give you complete control of your hospitality empire. Your goal is to attract the right customers, fulfill their culinary needs and send them to bed in one of your fine rooms, scoring points along the way.

The components and artwork fit the theme perfectly. The artwork and symbolism require explanation at first, but you’ll move past referencing the rulebook after a few games. The attention to detail, particularly with the unique customer and staff cards, is welcomed, because you’ll spend a good amount of time staring at your board (or maybe even reading a book) while you wait for your turn.

Gameplay is centered around a “snaking” turn order, meaning each player will take their turn in descending order, then players will take turns in ascending order—giving the last player back-to-back turns. The first player rolls the specified amount of dice, which is determined by player count, and organizes them on the action board. The action board is the central part of Grand Austria Hotel.  Each die you take from this board will yield an action which can be performed as many times as there are dice in that space when you take it. If there are 4 dice, for example, in the build a room action, you can take one from the action board and prepare up to 4 rooms of your choosing. There are other actions available that help you take food and drink cubes, hire staff, gain money, or use any rolled six’s as wilds to perform the aforementioned actions.

Before you take any of these actions, you can first attract an available customer from the main game board into your cafe. Some customers are free, while others can cost a couple bucks to be bribed into your clutches. Each customer is associated with a color, either red, yellow, blue or green, and will only retire to a room of the same color (though green patrons will sleep anywhere). Customer cards yield special extra actions after they are scored, such as taking a free customer, preparing a room for free or hiring new staff. Staff cards are kept secret from the other players and can grant special permanent abilities or end game points. Hiring the right combination of staff to compliment your selection of patrons is key to chaining several actions together and scoring big points. 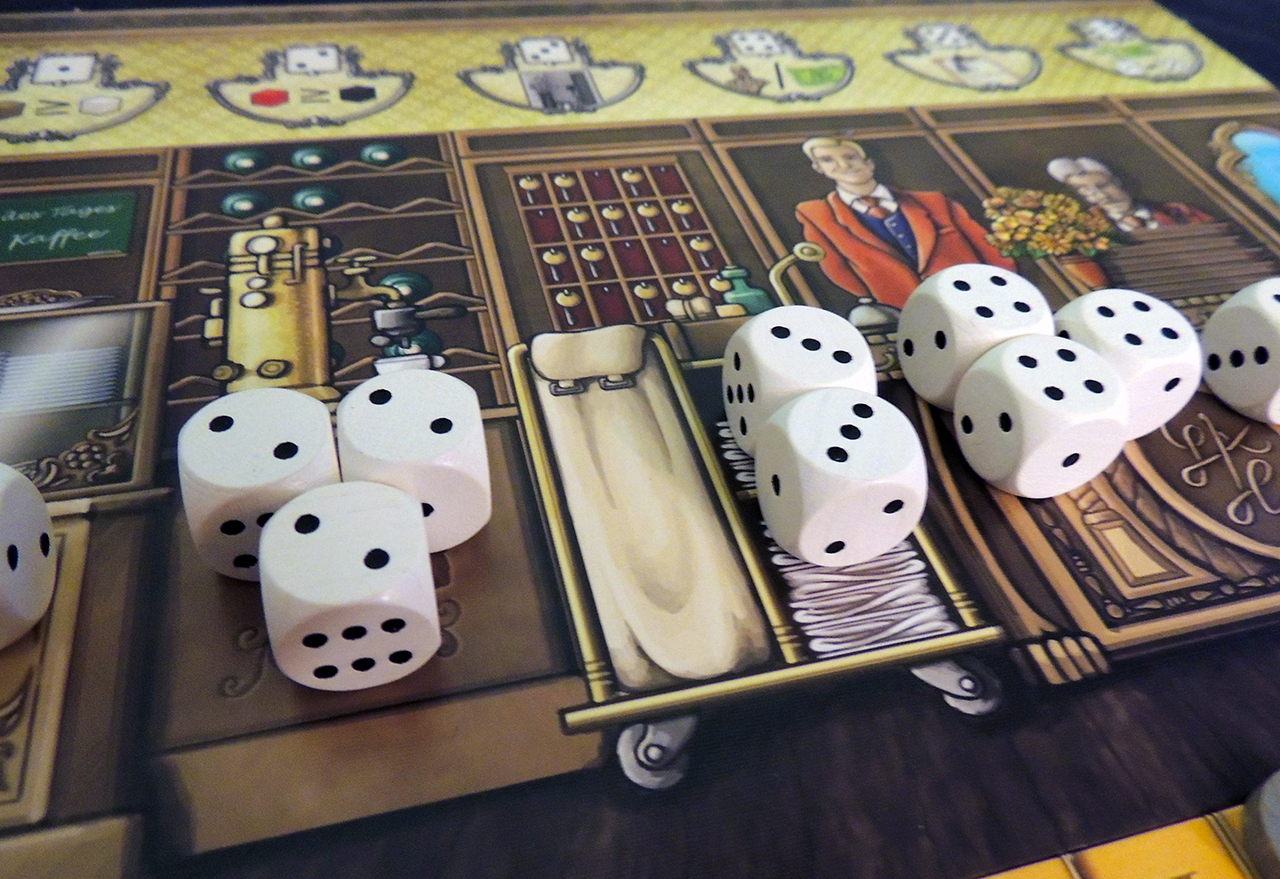 Running parallel to your cafe of diplomats and ‘famous’ personalities is your personal hotel board, which offers a mini game in and of itself. Not only is it used to track your money, dishes and customers, it also offers a strategic tile placement game. When preparing rooms you need to place them adjacent to one another; the placed room tile must match the color on the board while paying any costs determined by floor number. Higher placed and occupied rooms on the hotel board can score you some valuable end game points. Also, when the last room in a grouping of colored rooms is occupied, you can then perform yet another action. Have you figured out yet that this game is all about combos!?

One final thing to mention is the very important Emperor Track. The track is labeled from 0-13 and each player’s position is marked with a disk. Moving up this track allows you to gain points at the end of rounds 3, 5 and 7. During those rounds, you will gain points equal to your space on the track, then you will move your pawn back a set number of spaces (depending on the round). If you are still in the emperor’s favor you will gain a bonus, if not then you will suffer sometimes very harsh consequences. It’s definitely good to be the king.

After seven rounds are completed, a few end-game scoring conditions are tabulated, the politicians are all tucked away in their egyptian cotton sheets, and the kitchen gets wiped down and prepped for the next day’s service. The player who has earned the most 5-Star Yelp! reviews takes the cake…er…the strudel…and is declared the victor!

Suite Dreams are Made of These

Grand Austria Hotel offers an exceptional experience, wrapped in an initially boring sounding theme. The game has a lot of blended mechanics and moving parts that really scratches my strategy gaming itch. Once the dice are rolled your wheels will start to spin, trying to find the most efficient action available to you. Since you only get two actions per round, finding a powerful combo between your chosen action and your cards is both important and very satisfying. For instance, I was able to take 3 turns in a row and pull off combo after combo to score a very hefty sum of points. In fact it almost felt too good to be true, like I had broken the game. It is also highly important to pay attention to where you are on the Emperor Track. You must find clever ways to gain points on this track to reap the rewards it will offer or suffer some hefty consequences. It is good to emphasize the importance of this track to new players. (Sorry, Matt!) 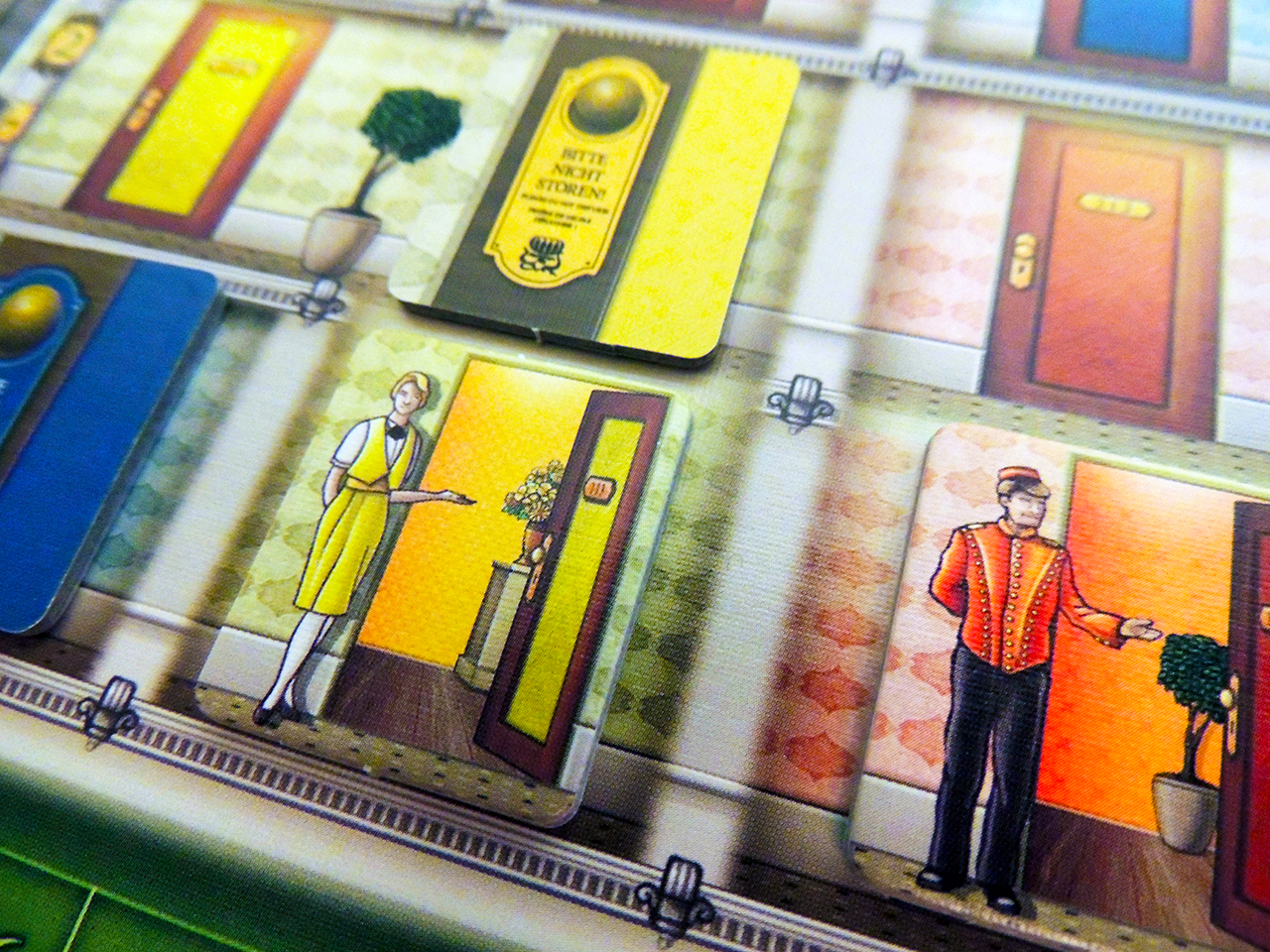 The most unfortunate aspect of Grand Austria Hotel is the down time in between turns. Since the turn order progresses in a “snake draft” fashion, it will feel like ages by the time your turn comes around again, especially if you are the first player of the current round. There will be lots of statements like “Is it my turn?” or “are you done yet!?” or even “Zzzzzzzz…”. If there was a way to speed the game up in between turns, this game would for sure jump a few points in our rulings. That said, when it was my turn, I was having some of the most fun of my gaming life. Positioning yourself to pull off a great combo will have you feeling extremely satisfied as you hear the groans from your opponents (from behind their phones, probably).

I have played with all player counts and found that two players is good and quick, but it almost feels too quick; while four players, especially first plays, will take ages. Three players seems to really hit the sweet spot in terms of length and tolerable downtime in between turns. Like any game, the more experienced the players, the quicker things will move. I have enjoyed every play of this fantastic game with all player counts. Grand Austria Hotel will easily be near the top of my “Best of 2016” list. 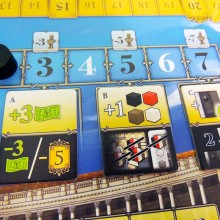 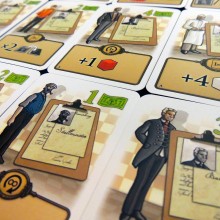 First impression: I enjoyed this game quite a bit when I played it. We had four players, two of us were new to playing, although apparently Steve had neglected to teach Matt how important some of the rules were when they’d played before so let’s say 2.5 new people. Gameplay-wise, this game is really interesting. There are many ways to score points and make your hotel the greatest ever. I like that versatility in gameplay. What I didn’t appreciate quite as much was the fact that it took FOREVER between turns. I have one of the shortest attention spans and I think that part of the reason I actually really enjoyed playing this game is that I was able to finish an entire chapter of A Dance With Dragons during the course of the game. I’m not sure how much I would have enjoyed the experience if I hadn’t had something else to occupy my mind while I was waiting between turns. For some reason, this one hasn’t made it to the table when I’ve been around since I played that time, but I would certainly be interested in playing it again, maybe with only three players so that it chugged along a little more quickly.

Let’s get right to it, this game takes forever. Because of the snaking turn order, in addition to the fact that it’s a mid-weight Euro game, there can be upwards of 15 minutes between your turns when playing with a full compliment of four players. This, for a number of reasons, is unacceptable and causes players to disengage completely from the experience. As a player, you are unable to use that time effectively, to strategize or interact with the game, because the board state shifts rapidly with each turn. What’s available and the potential combos that could be executed evaporate before you have another chance to act, so you spend the lag time just sitting or, if you’re Kel, reading a healthy chunk of A Game of Thrones.
I feel heated, almost angry, about the length of the game because it’s a legitimately enjoyable and well-crafted game, length aside. The options and decision making are engaging, and the combo building is satisfying. It’s a game I would love to jump into, if I knew that I’d actually spend more than %15 of its duration actually playing, instead of Tweeting, chatting, going to the bathroom to occupy myself (that sounds weird…) or napping. Playing the game is wonderful; waiting in line for your chance to play again—and that’s what it feels like each turn—is not.