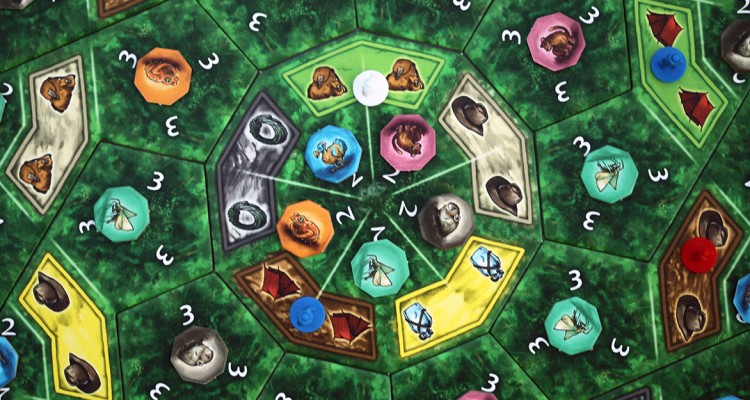 Crikey! Ain’t she a beaut’! I can’t believe that a dodo, long thought to be extinct, is here right in front of me on the isle of La Isla. Look at the plumage… and that beak! My team and I are poised to capture this magnificent creature; one of the last few specimens that will complete my research of all the island animal dweller.  All for science of course, we don’t want to harm the little fellas! I need to be quick and use my time wisely, there are other explorers on this island who are out to claim all the glory.

Where the Tiles are Green and Not So Pretty…

La Isla (for those who don’t parlez-vous, is French for… the Isla) is a game for 2-4 players who are ready to explore an uncharted island, surprisingly inhabited by extinct creatures. The gameplay offers a nice blend of mechanics, but is predominantly card driven. The main goal for each explorer is to surround and collect different animal inhabitants in order to score points. Each round is broken down into four phases, and actions are determined by a hand of three cards that must be strategically ordered and played in certain phases of each round. As players collect animals and play cards, the point-values for each type varies along the animal track board, allowing players to manipulate this track using certain cards from their hand. The game will end when a specific point value has been met or exceeded on the animal track. Final points are then awarded, and the research team with the highest score is published as the La Isla winner! 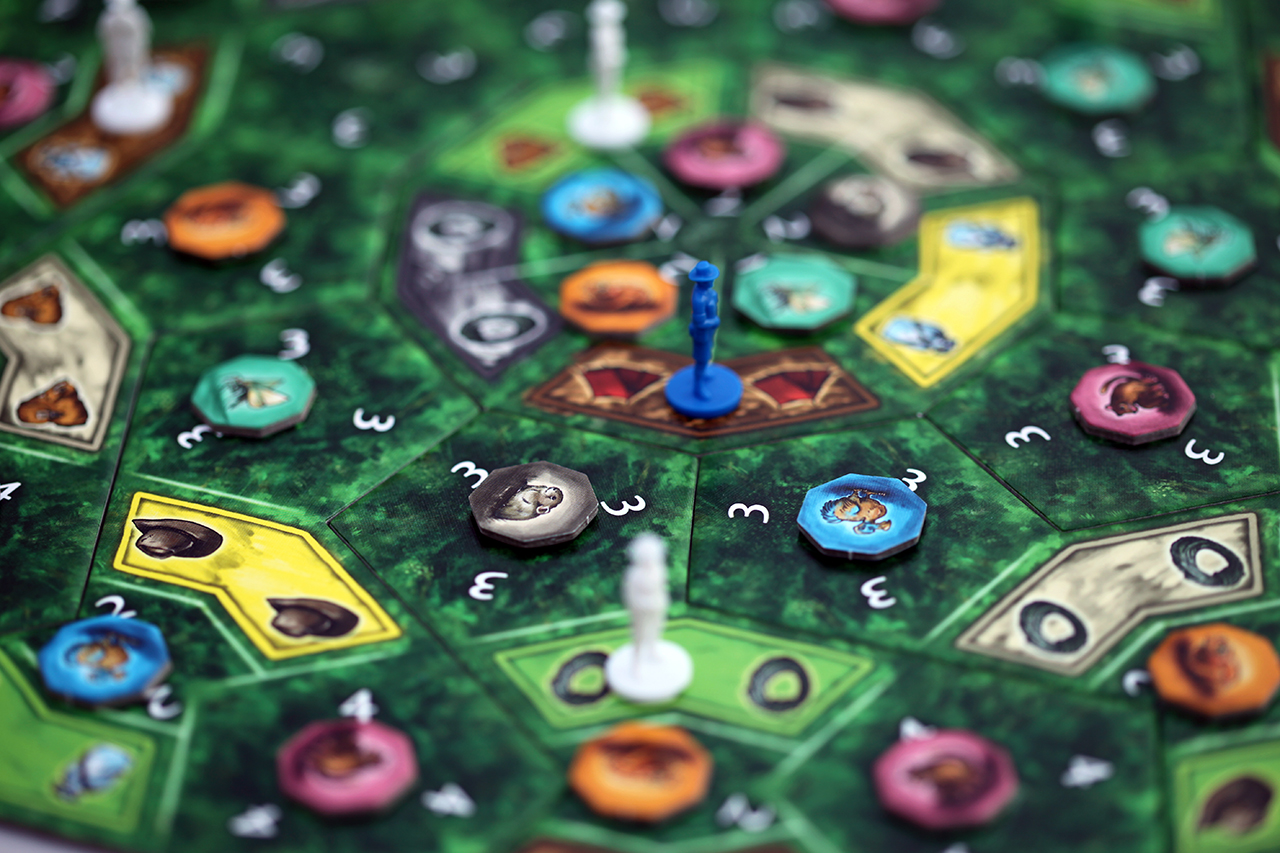 For a game that consists of many different types of components, from cards to wooden blocks, you can’t help but notice all of the green as you puzzle together the randomized board and settle the animal tokens in their place. For some, this design choice can be a little off-putting and monochromatic, making it difficult to pick out details in the sea of similar colors. Component quality is acceptable for the most part, but some aspects seem to have a “budget” feel to them. The tiny plastic explorer tokens are neat but, well… tiny, and the card holders for each player are not ideal but they work fine. I have the most grief with the animal track board; it is made of a slightly thicker material than the rule book, but is still rather flimsy. It seems easily susceptible to folds, wrinkles or tears and advancing your score marker across the score track can be at times, a delicate process. Still, we play games for the games, right?! And by golly this is a pretty darn good game despite its small design flaws!

As far as that gameplay goes, a typical round is broken up into 4 phases that are labeled A-D. In turn order, players draw three cards and decide which cards to use in phases A, B and D. Each of these cards are broken up into sections, showing different actions that may be taken in each of the phases. Phase A (the top portion of the card) depicts a special ability that can be gained by slotting the card into their holder. Phase B (the lower left portion of the card) depicts a resource cube that can be obtained by discarding the card, while phase D (the lower right portion of the card) depicts an animal type that may be advanced up on the animal score track. All cards for the round are placed face-down simultaneously, with only one card allowed per each of the three phases. During phase C, players do not play a card, but have the ability to place an explorer on a space using two resource cubes of the color matching the desired location. Cards are then revealed and resolved in turn order. After all four phases are completed the start player token is then passed clockwise and a new round begins.

Explorers offer the ability to collect an animal token from an island tile after surrounding it on all sides. The location and geography of the island tiles determines how many explorers are needed to completely surround and capture one of these animals. Spaces can be shared by other explorers, so you are only limited by what cubes you have in your supply to spend. Once a player successfully surrounds and captures an animal, they remove the token from the board and add it to their collection, scoring points based on the jungle region. If a player is able to collect a full set of the five different animals, then they will be able to score a decent bonus at the end of the game. 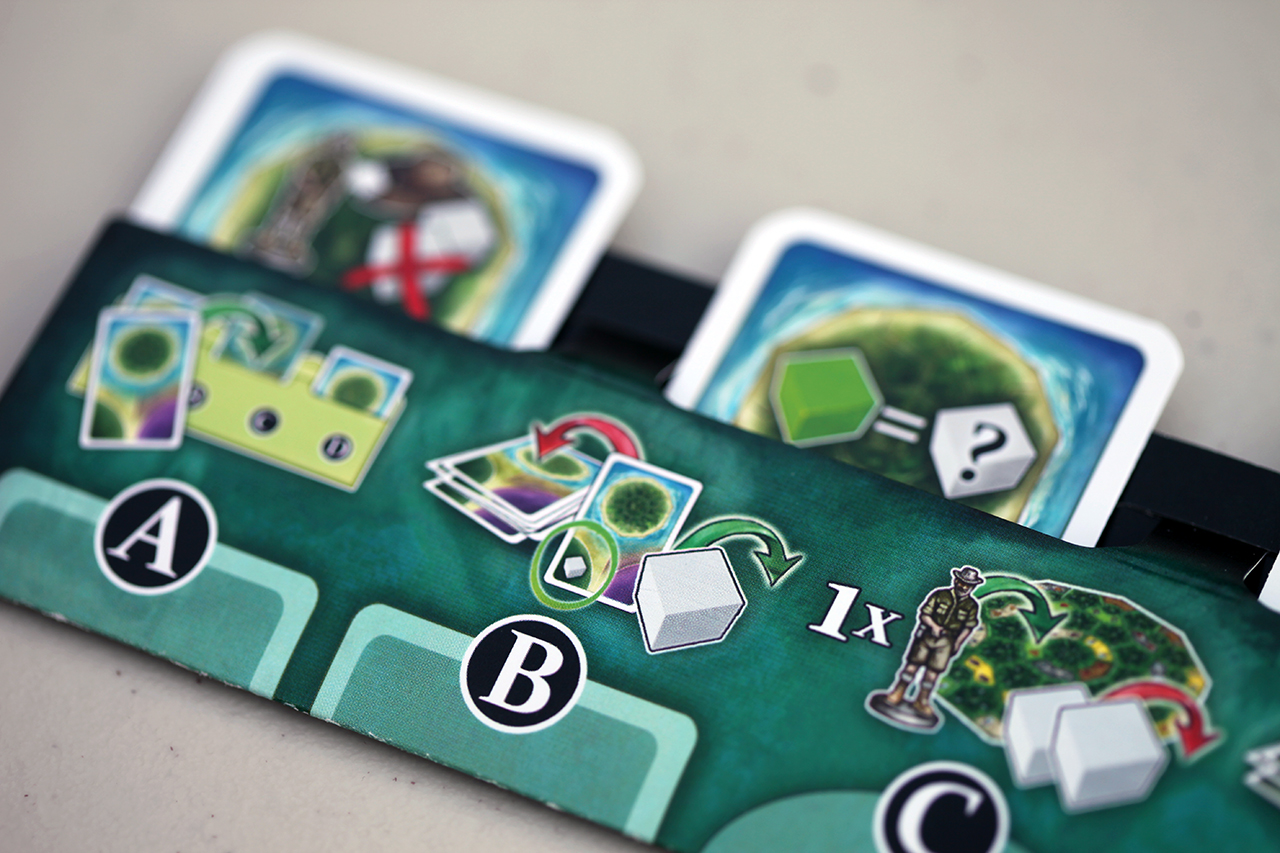 Get your Feld Feet Wet

As mentioned previously, La Isla offers a great blend of different mechanics. You have cards to drive your actions, a little bit of resource management and worker placement, rounded off at the end with some basic set collection. The meat and potatoes of this game is really all in the cards. When you get that first hand and you see the different special powers, you feel a sense of ease, expecting the animals will just come running into your arms, to live with you in your cramped apartment, like some kind of pseudo Ace Ventura. Once you hit the fourth round, though, things may go south quickly. With panic in your thoughts, you eye the three cards in your hand, trying to decide what must go where. Since you MUST select a card for each phase, that perfect combo of abilities will only last you so long, as now you need to cover up one of those special abilities with a new one. On the other hand, you may have a card that will give you a resource cube that you need for your next move, but the special ability on that card is just too spiffy to pass up. Only then do you realize that the animal on that SAME card is also what you need for phase D.

All that said, I really enjoy this game mainly for the fact that you are always on your toes to deal with that next card draw, and puzzling out how you are going to make it work. In all of the games I’ve played so far, final scores have always been pretty close. The set collection of the different animals seems to be key if you want to compete for the win. I always approach La Isla with this strategy in the back of my mind and so far it has worked out well, winning most games if not ending up close behind in second. The game is pretty easy to teach and on the lighter side of things so I would consider this on the intro side the Stefan Feld titles (#sexyfeld).

I think the most disappointment I have with La Isla are some of the components are a little “cheap” feeling. During setup I am always reminded on how I need to paste the animal track onto some thicker cardstock to make it more of a board; its current state feels like a piece of paper to keep track of things. I may also suggest looking for some printable player aids. These aids are crucial to new players since it defines the special ability for each of the cards. The game does offer one copy that you can pass around, however, but this is not ideal in the long run. Small gripes aside, La Isla offers a huge replayability factor in the randomized setup and offers a pretty nice strategic punch in a small box. I recommend anyone wanting to first dip their toes into the Feld waters to surround and collect this one. 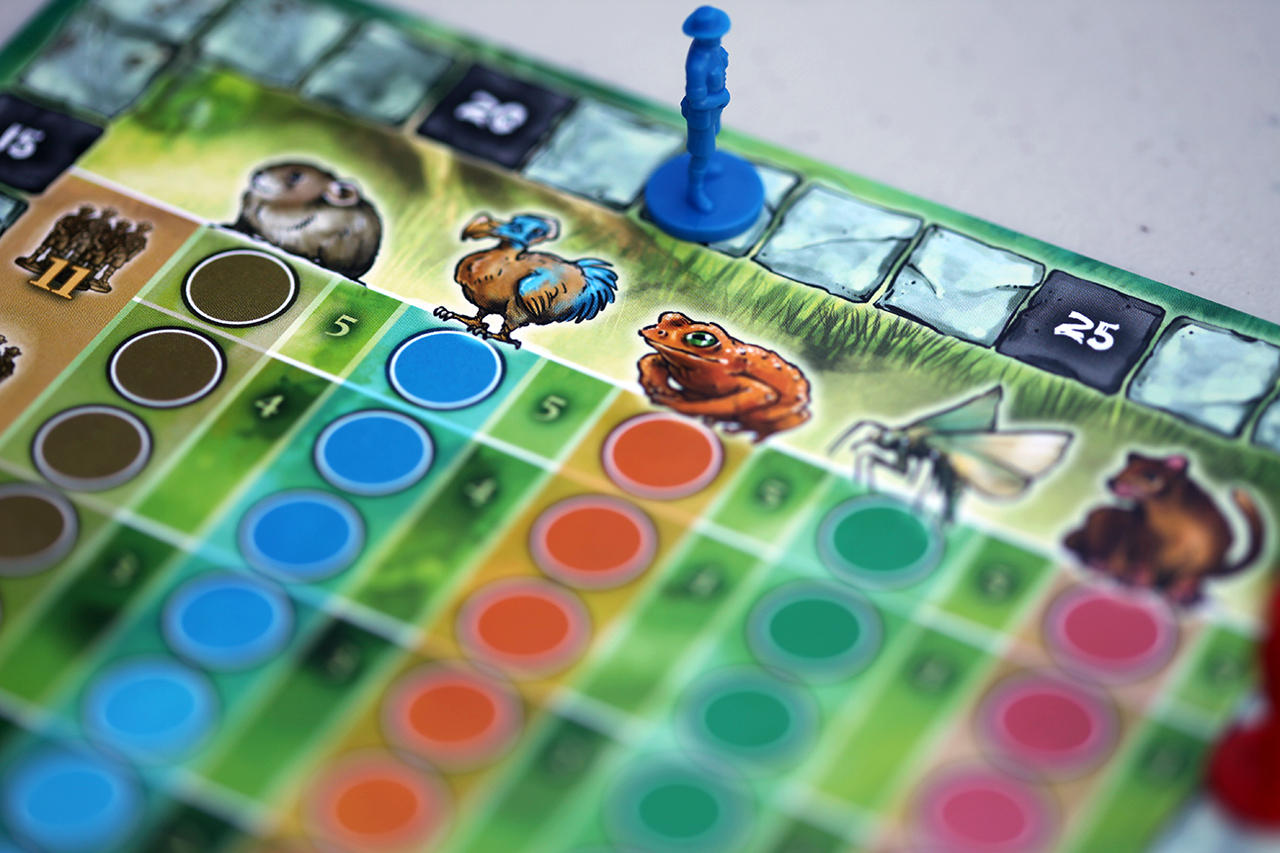