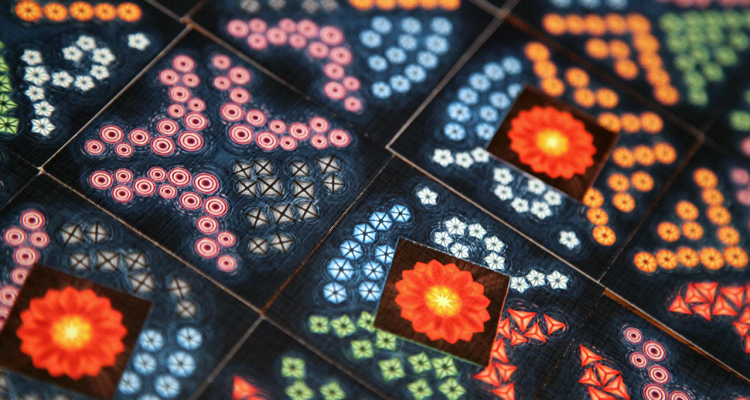 In Lanterns: The Harvest Festival, you take the role of a servant set out to gain honor from the Emperor through a dazzling lantern display for the upcoming Harvest Festival. To become a renowned artisan you will arrange floating lanterns in the lake, buy new lanterns, and dedicate them to gain honor. There are seven different colored lanterns to be collected—red, orange, green, blue, pink, white, and black—and three dedication set types that can net you honor, including four-of-a-kind, three pairs, and a set containing one of each card color. If you earn the most honor, you are deemed the winner and the Harvest Festival’s success rivals the well-received Catalina Wine Mixer. 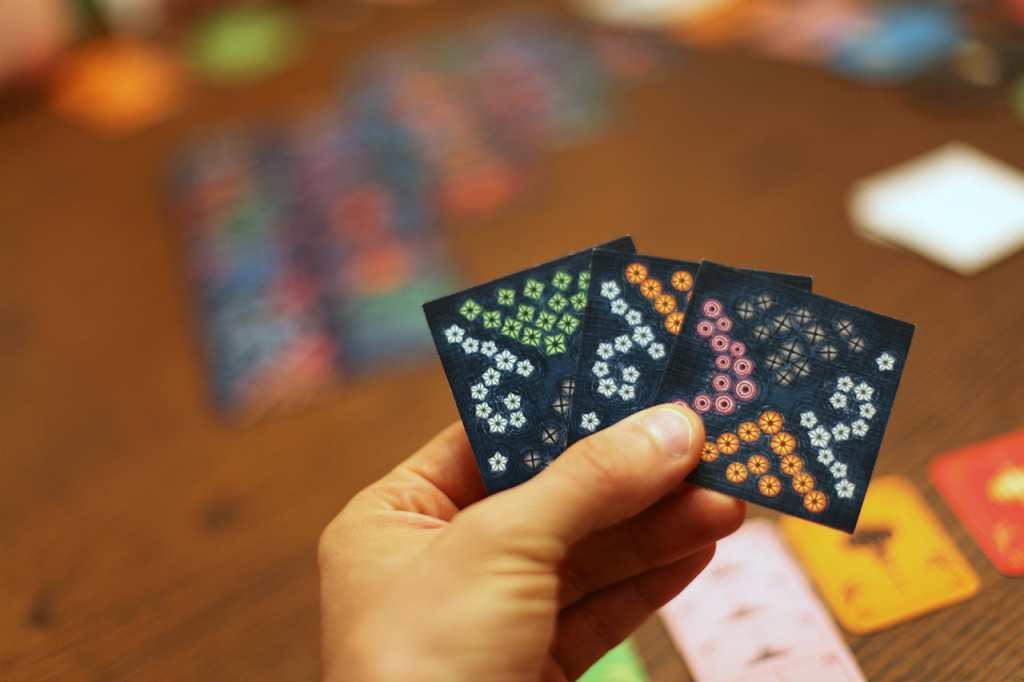 Lanterns is a light, a 2-4 player tile placement and set collection game that can easily be enjoyed by the whole family. This is not a game you’ll be overburdened by rules, but instead keeps things simple to allow for a velvety experience. Aesthetically, Lanterns (even from afar and in prototype-form), is very pleasing on the eye. The minimalist design of the cards and tiles is both sleek and functional. As the lake is peppered with lanterns, vibrant, kaleidoscope-esque patterns are formed, reflective of the free flowing lanterns of the Chinese festival.

You begin with a hand of three tiles, each of which have a pattern of lanterns containing four quadrants. To start, a tile is placed adjacent to the starting lake tile designated by the boat. Depending on the direction you face the tiles, a Lantern card is collected that matches the color facing you. If you connect matching-colored lanterns on any side, you will also receive an additional Lantern card of that color. There are some Lake tiles in the stack that contain a platform; if either of the cards that have been matched contain this symbol, you’ll receive one Favor token. But, wait there’s more! With every card played, your opponents will also collect a lantern card of the color that faces them. This seemingly minute, but unique, rule becomes a prominent part of the game, especially toward the finale.

There are two optional actions that will come into play during the game. The first is to pay two Favor tokens to exchange one Lantern card from your collection for another. The second action available is to hand in your sets and receive the topmost Dedication card. These actions are optional and done once per turn in their respective order prior to placing a tile. In order to complete your turn, you must place a tile. You’re able to place it adjacent to any tile in the center of the table, being mindful of the outcome for everyone based on its orientation. 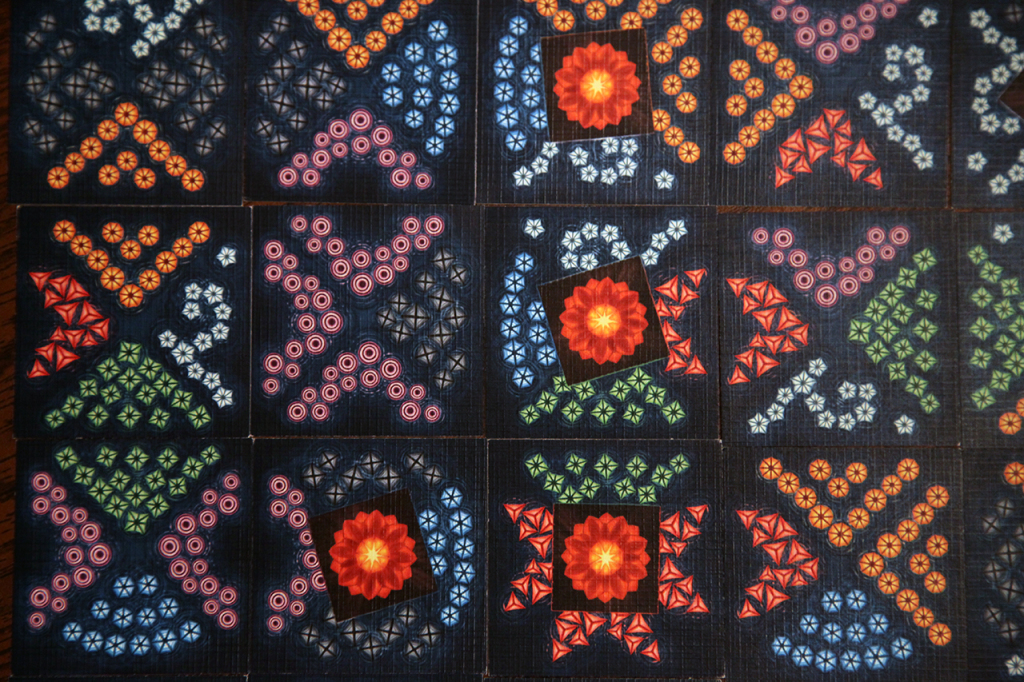 Because everyone is adding lantern cards each turn, the game moves at a quick, steady pace for the first few go-arounds. The first, and sometimes second turn, are somewhat of a toss up as everyone is just trying to build a set, since the minimum set consists of four cards. Later in the match, however, more time will be taken to think how the placement and orientation will affect your neighbors’ collections. (Or in our case, strategize aloud against the active player by announcing what they need!) Whether you play discreetly or point out who-needs-what to prevent a fellow servant completing a set, there isn’t an overwhelming amount of strategy. This is favorable considering this game is likely targeted at a more casual audience.

My mentality in any competitive game is to prevail, so it was hard to see others benefit on my turn by adding to their sets. The plus side is you’ll be getting cards each turn, too, if that color is available. On occasion, I’d be left out of the giveaway because everyone was hoarding cards. Even with cards being hoarded, I didn’t find it particularly difficult to create sets. It’s simply a matter of who can create them in the most timely fashion. Similar to Jaipur, the Dedication cards descend in value creating anxiety to beat your friends to the highest possible point value.

The one saving grace is that some values are repeated in the stack, so you don’t always take a hit if you’re not able to get to the desired Dedication card in time. Once things get moving and sets start being made, you need to keep pace. I lost many a game by only a single score because I was unable to dedicate any lanterns on a single turn. Disheartening? Sure. But, it was nice that the games were close. I initially played a few games of Lanterns with 4-players and just sort of floated by. 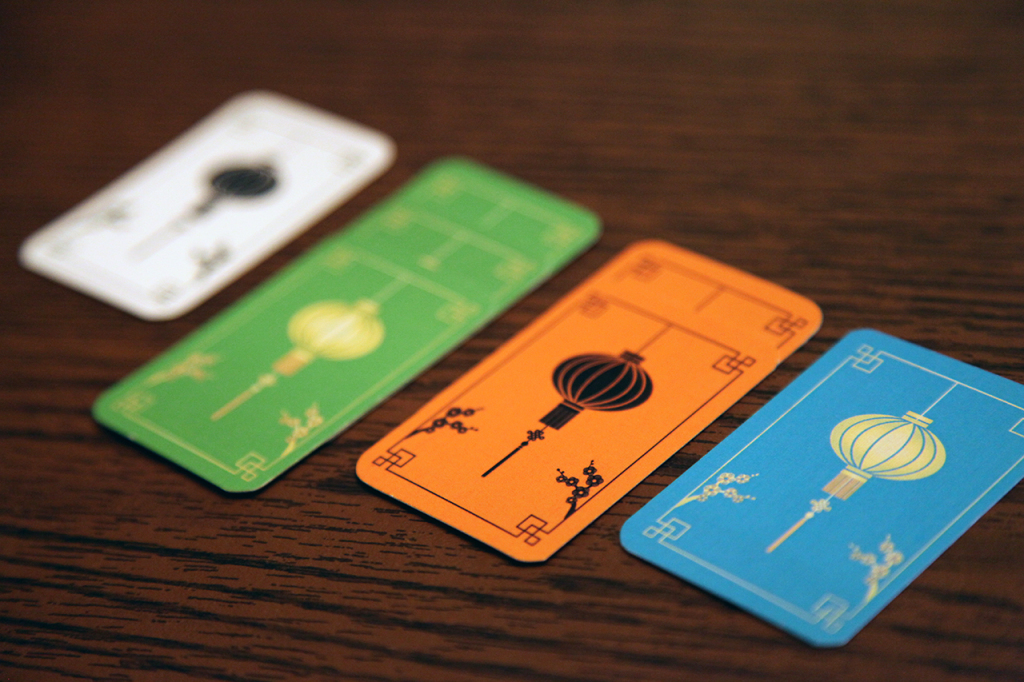 Strategy, for our particular group, didn’t become essential until later in the game, when there were shortages of certain colored Lantern cards and plenty of tiles in the center to create bigger matching combinations. For me, this was the rare case of a game being more enjoyable with less people. Unlike games that get a little wackier with more players, this one made if feel as if my decisions weren’t making a huge impact. People were going to make their set whether I helped them or not. But, with 2-players each move seemed more crucial and I had time to think ahead and anticipate some outcomes.

Lanterns felt familiar with similar gameplay to other games with set collection, but contributing to your opponent’s collections forces you to make sacrifices. You’ll have to hand out some potentially costly Lanterns cards to one or all of your fellow artisans, but you’ll end up receiving cards, too, so there’s a give-and-take. I wish there was a little more to the scoring. Only having three sets to collect, it is fairly obvious which sets everyone is attempting to create. It’d be nice to have a secret set goal, similar to your routes in Ticket to Ride or your goals in Takenoko. Something that would conceal your intentions a bit more. Its simplistic gameplay and theme make it accessible to a range of ages and players, catering to a more casual crowd, but in what seems like a rare occurrence, I prefered this one without a crowd.

Lanterns is another quick-playing game that I found myself quite enjoying, its simplicity of design not necessarily a drawback. There are strategies available to you, but they are ephemeral, like moonlight on the surface of the lake. Both you and your opponents must adapt to the current layout of the board and the accumulated Lantern cards when deciding which tile to lay down for yourself and your fellow players.

I really enjoyed Lanterns. It was a simple and easy game to play, but had a good amount of strategy to how you placed your tiles. You want to place them in a fashion for you to gain the Lantern cards you need, but you don’t want to accidentally have your opponents also gain from your tile placement. This game has a similar mechanic to scoring to that of Jaipur, which is welcome in my book.

From a mechanical standpoint, Lanterns is as smooth as they come. Obtaining lantern cards on other player’s turns, keeps you constantly involved in the game and paying attention to what others are doing and how the board is evolving. How you react to this evolution and the strategy you employ varies based on player count. With 2 players, the game feels like more of a race. Only having to worry about one other player receiving lantern cards from my tile placement, I felt it was much easier to understand the game state and tactically place tiles to hinder my opponent’s plans. In the three- and four-player games, scarcity of the lantern cards comes into play more as a strategy you can use to block an opponent. At all player counts, the random draw of the tiles you obtain will always factor in but the ability to trade in one of your cards for another (if you have the appropriate number of tokens) helps to mitigate this.

Overall, the simplicity and fluidity of the game mechanics, along with the vivid art/design, make it extremely accessible to younger and more casual gamers which I believe to be the target market for this release. That being said, it’s that same simplicity that may deter more hardcore strategic gamers from enjoying themselves, as the game is not overly deep. If you enjoy light set collection games like Jaipur and Ticket to Ride, I highly recommend you check out Lanterns: The Harvest Festival.

The League of Nonsensical Gamers would like to thank Foxtrot Games for kindly providing us with a prototype of Lanters for this preview.

Lanterns is currently funding over on Kickstarter. If this game piques your interests, head on over to the campaign page by Nov 5, 2014  to claim your own copy. For $24, you receive a copy of the game along with all reached stretch goals.