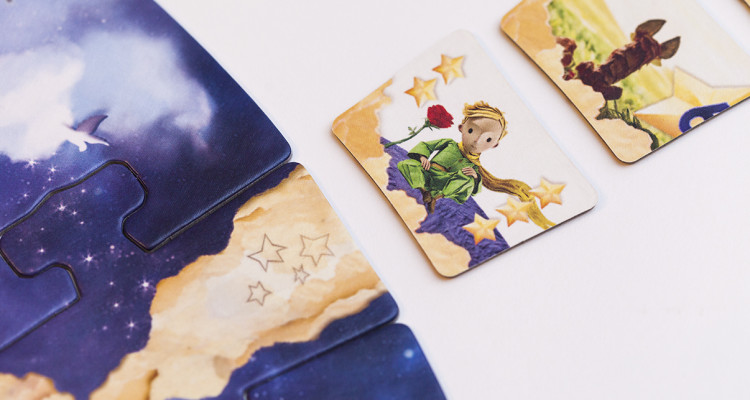 The Little Prince: Rising to the Stars | Review

A ll men have stars, but they are not the same things for different people. For some, who are travelers, the stars are guides. For others they are no more than little lights in the sky. For others, who are scholars, they are problems… But all these stars are silent. You – You alone will have stars as no one else has them…” – Antoine de Saint-Exupéry, The Little Prince

Based off the acclaimed book and highly anticipated movie, The Little Prince: Rising to the Stars is a card-driven racing game from two stars of the industry, Antoine Bauza and Bruno Cathala. You and your friends will be dashing through the clouds to the Little Prince’s planet, trying to collect the most stars along the way in this highly interactive and family-friendly game that is sure to interest fans of this beloved classic.

Rising to the Stars

In The Little Prince: Rising to the Stars, each player is given an identical starting hand of eight Fox Cards. These cards are numbered one through five (with duplicates of the two, three and four cards) and signify the number of cloud spaces you can move your plane when the card is played. 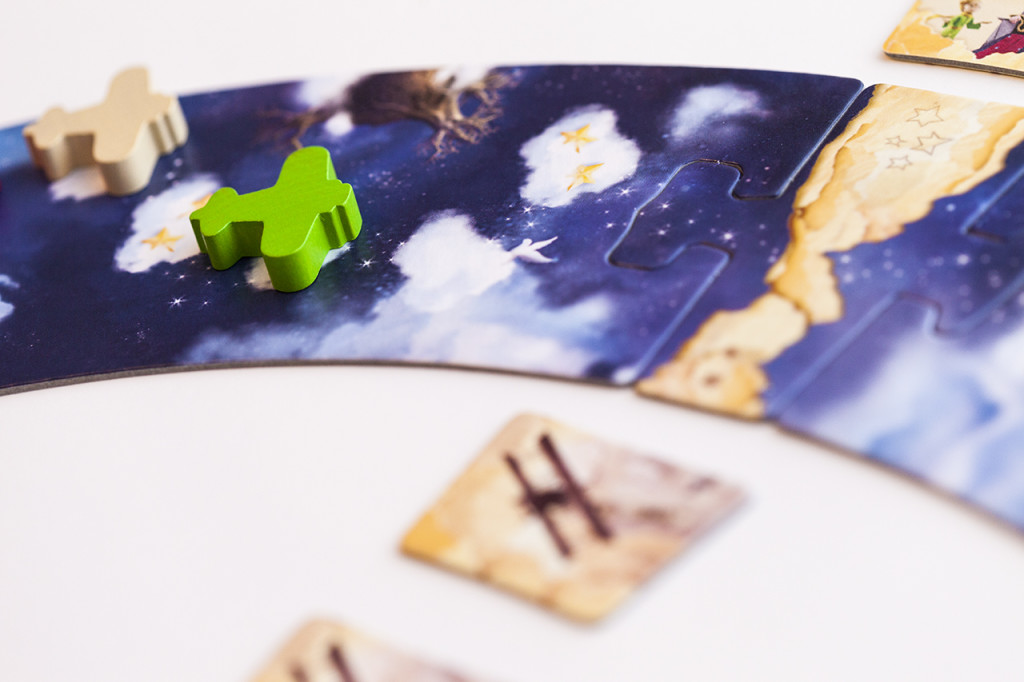 Four types of clouds will combine to form the path that you will be following on your journey: the blank cloud spaces offer no reward; the star clouds provides stars from the general supply; the telescope cloud allows you to take a risk and flip one of the telescope tokens for the reward (or possibly a penalty!), shown on the token; and landing on a dove cloud grants you a Grandpa Card, which are useful for their high values or special movement abilities. Only the first plane on a particular cloud may trigger the reward, however; when landing on a cloud space with an opponent’s plane already there, you will instead steal a card at random from their hand and then return a card of your choosing (this can even be the same card that you stole from them). It is important to note that your starting hand does not provide enough movement to make the entire journey from start to finish. You are going to have to aim for dove clouds, as well as take advantage of your opponents’ planes to acquire the cards necessary to reach the finish line.

Along the board there are three lines you will cross on your journey, each one rewarding you with a story tile that will add stars to your total at the end of the game. As you move along the board, you must weigh the benefit of racing out in front and grabbing a coveted cloud space or story tile, against a slower and more methodical approach where you incrementally move forward, collecting items along the way. Given that the active player is always the one in last place, jumping ahead will likely reward slower planes with multiple turns in which to catch up!

If at any point you run out of cards in your hand, you have only two options left: 1) to discard a story tile you have collected in order to move up to five spaces or 2) withdraw from the race. Withdrawing from the race does not necessarily preclude you from winning, as your collected stars still count in the end, but it’s a lot more difficult. 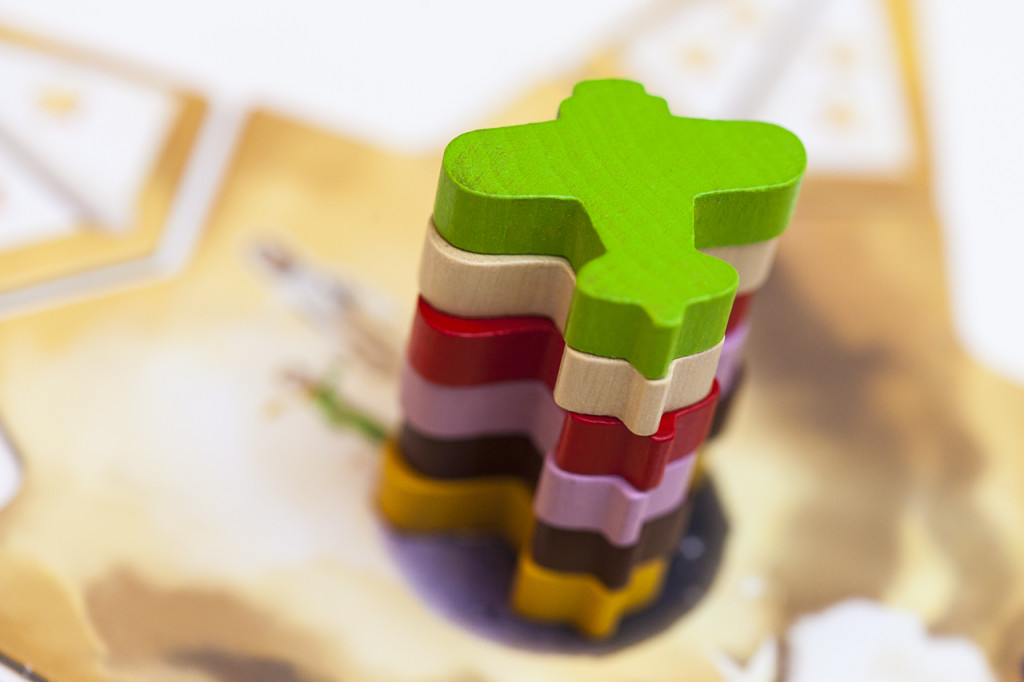 If you manage to make it all the way to the Little Prince’s planet, you will receive a paper plane token that rewards star points, with the quickest players receiving the higher-value tokens. Once everyone has reached the planet and/or withdrawn from the race, whoever collected the most stars wins!

Should you embark on the journey?

“Grown-ups never understand anything by themselves, and it is tiresome for children to be always and forever explaining things to them”

The Little Prince: Rising to the Stars is geared towards families and younger gamers. Everything from the simplicity of the mechanics to the beautiful illustrations and clear, concise graphics is designed with children in mind.  Yet, this game is still enjoyed, and understood, by grown-ups alike. The game moves along with a brisk pace at most times, regardless of player count, coming in under 25 minutes. The simplicity of the mechanics and ease with which players grasp the flow of play makes this game extremely accessible to families and casual gamers.

“No one is ever satisfied where he is….Only the children know what they’re looking for….”

One small criticism of the game, at least from a grown-up strategy gamer’s point of view, is the potential of pulling out of the race without finishing due to a lack of cards. The ability to enhance your starting hand through stealing opponent’s cards or acquiring Grandpa Cards mitigates this to some degree but both elements are essentially random. The lack of depth or strategy in the competitive  elements can be frustrating at times; however, within the context of the game and its target audience, its purpose is understandable. The game is meant to be highly interactive and the race to the finish, like The Little Prince’s journey, is full of trials and tribulations – like that time you stole my six-space movement card!  A word to the wise, this is not the game to pull out with children, or even grown-ups, that have trouble with “take-that” elements in games. I would also recommend playing the game with 4 or fewer  players for a less interactive experience if you envision problems on this front.

“And now here is my secret, a very simple secret: It is only with the heart that one can see rightly; what is essential is invisible to the eye.”

As the proud papa of a 20 month old little boy, I have started to view my purchases with an eye to the future. More and more I find myself interested in lighter, more family-friendly games, always asking myself “is this something I would enjoy playing with my son in the future?” The Little Prince: Rising to the Stars is a game that I answer “yes” to when asking myself this question. The game combines top-notch production quality with swift, fun game play for an experience that both children and a grown-ups can take pleasure in. If you’re looking for a solid addition to family game night, I highly recommend you race to the store and stick this game on your shelf! 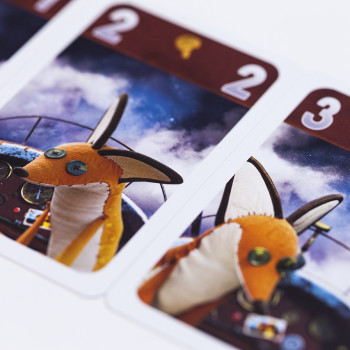 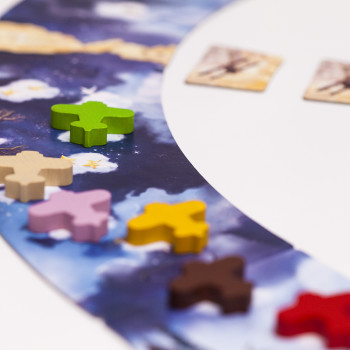 There are two ways to look at The Little Prince: Rising to the Stars: a) from the perspective of its target audience and b) from my own perspective as a gamer. In terms of its family-friendly approach, there is a lot to enjoy about The Little Prince. For one, the rules are simple and offer a small amount of decision-making that will stimulate the brains of younger players without overwhelming them. Additionally, there is a nice level of player interaction, something that any game night with kids will thrive on. The game is definitely “take that,” but this is generally a welcome challenge to confront children with, as they work on developing coping skills and the ability to win or lose in an appropriate manner. In these ways, The Little Prince is a wonderful choice for a family game night, offering a more unique experience than much of the standard tabletop fair that can be played start-to-finish in less than 30 minutes.

From my personal perspective, these positives aspects carry over to a more adult-centered gaming experience, though the player interaction becomes much more tactical and abrasive when played with the stone-cold-killers in my game group. It’s a nice touch though, that The Little Prince falls in that category of “kids games adults can love” for reasons outside of its family appeal. Much like Tortoise & the Hare or Animal Upon Animal, this game is legitimately fun and clever even for an older audience, though it will reach its peak and fizzle much faster with more experienced folk. It simply isn’t deep enough or varied enough from game-to-game to become a classic, but it still has plenty of merit.

With the film fast approaching, keep an eye out for The Little Prince on your shelves in the latter half of this year. Whether for a birthday or holiday gift, or simply to mix up your evening activities with friends and family, The Little Prince: Rising to the Stars is a welcome addition to the family gaming genre because of its deviation from the big-box formula and its wonderful theme. Just don’t expect it to hit the table with your Twilight Imperium group too often.