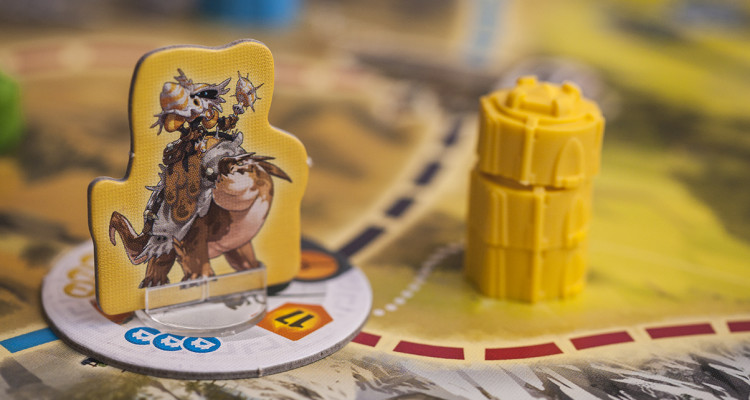 Eons ago, before the world became the world and men began to dream and the first magic was woven, there existed nothing but chaos and destruction. Yet, in time, the just and merciful Old Gods eventually overcame the darkness that reigned the cosmos, sealing it in a sacred urn.

On that day, we are told, the reign of men began.

Since then, the passage of countless years has eroded knowledge of this evil, once known as the Southern Host, from common knowledge. Alas, on what was to be a day of celebration, the ringing of a ceremonial bell shattered this urn, spilling forth the darkness into an unsuspecting world. It is now your duty to rally the Kingdom and fight back against the monstrous horde.

Lords of Xidit is a ‘pick-up and deliver’ style of game (with several thematic twists!) for three to five players. Set in the same universe as Seasons, you are one of the Idrakys, heros tasked with bringing hope and succor to the beleaguered cities and towns in the Kingdom of Xidit. To fight the monsters ravaging the countryside, you must draft willing recruits from the cities you pass, ranging from the lowliest of peasant militia up to powerful clerics and wizards, keeping in mind that various creatures require specific combinations of troops to defeat! Pick your battles, and your rewards from these battles carefully, for as heirs to the Kingdom your deeds will be judged at the end of this conflict. Gather your wealth from defeated foes, support the guilds in the myriad regions of the Kingdom, and lead your troops well. Succeed in all of this, and along the way, bards will carry your stories and songs to the taverns and inns of the land, spreading the fame of your deeds through the inhabited regions. 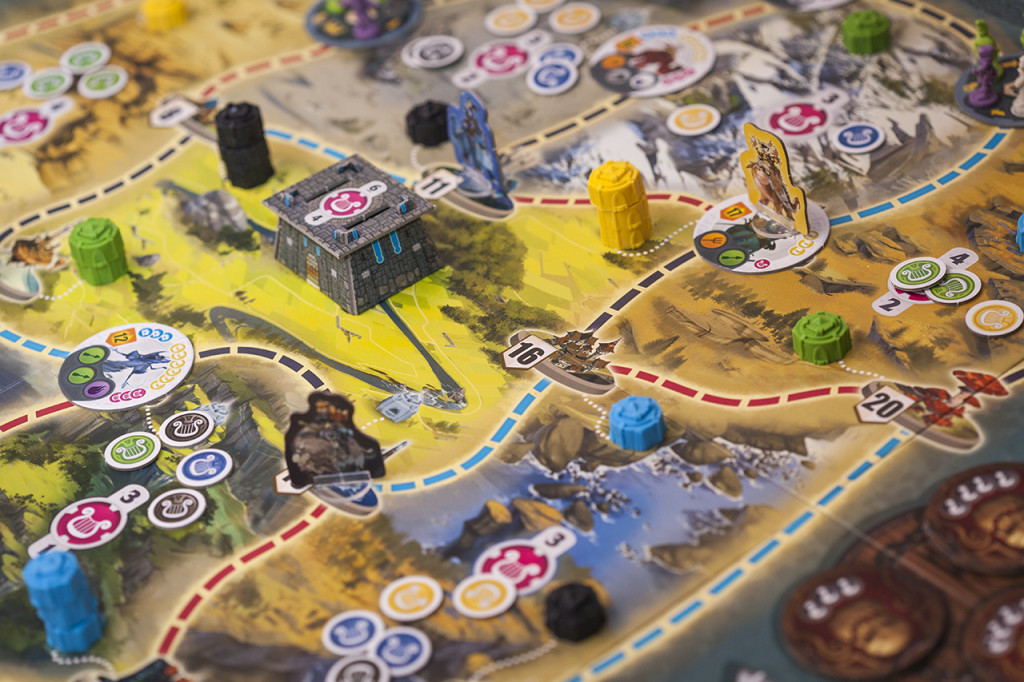 How do I get There From Here?

The map in Lords of Xidit features a series of 21 interconnected cities that border the nine regions of the Kingdom, with each location boasting three colored paths that lead to neighboring cities. These paths are what your characters must follow as they travel from city to city, based on the movement and actions that you will program in on the nifty player boards at the beginning of the turn. Each city also contains a connected space for the construction of Sorcerer’s Guilds, where only one player may build at a time, and the surrounding regions are the basis for an area control mechanic revolving around your hero’s fame and the spread of their bardic tokens. A Bastion built in the center and most valuable region, keeps the accumulated number of bardic tokens there a secret until the end game.

At any one time, five cities will be available to recruit from, while yet five others will be under siege from the cruel monsters of the Southern Host. When a city tile has been emptied of recruits or a monster has been defeated, it is immediately replaced by a tile from the matching stack and the old tile is flipped over to eventually be redrawn on the opposite side. This ‘Path of Destiny’ system keeps the placement of new tiles spread across the board by ensuring that the same tile won’t return in quick succession, and allows players to anticipate where the next foe will appear, or a fresh batch of recruits can spring from.

Final scoring is handled through an assessment of each of the three important categories: Wealth, Fame, and Guild Support. The player with the least influence (or players, for a 5-person game) in each category is eliminated before considering the next of the three.. ensuring that while you don’t have to be the best in everything, you just need to beat your nearest competitor. The order of which these will be assessed in is randomized at the beginning of game, and provides an additional way to keep the experience fresh.

At the beginning of each of the 12 rounds (nine, if you’re playing the shorter version), players will simultaneously program their six wheels from the following choices:

Red / Black / Blue – Every city contains one path of each color, and this action moves your character along the selected path to the next city.

Act – Either recruit the lowest-ranked unit from a city tile, or spend units in order to defeat a monster and take the reward. If there are any active Titans, choosing to Act on an empty city location will allow you to pick one of them to fight.

Wait – Selecting this simply means that your character stays put and takes no action. Useful if you’re planning several moves ahead. 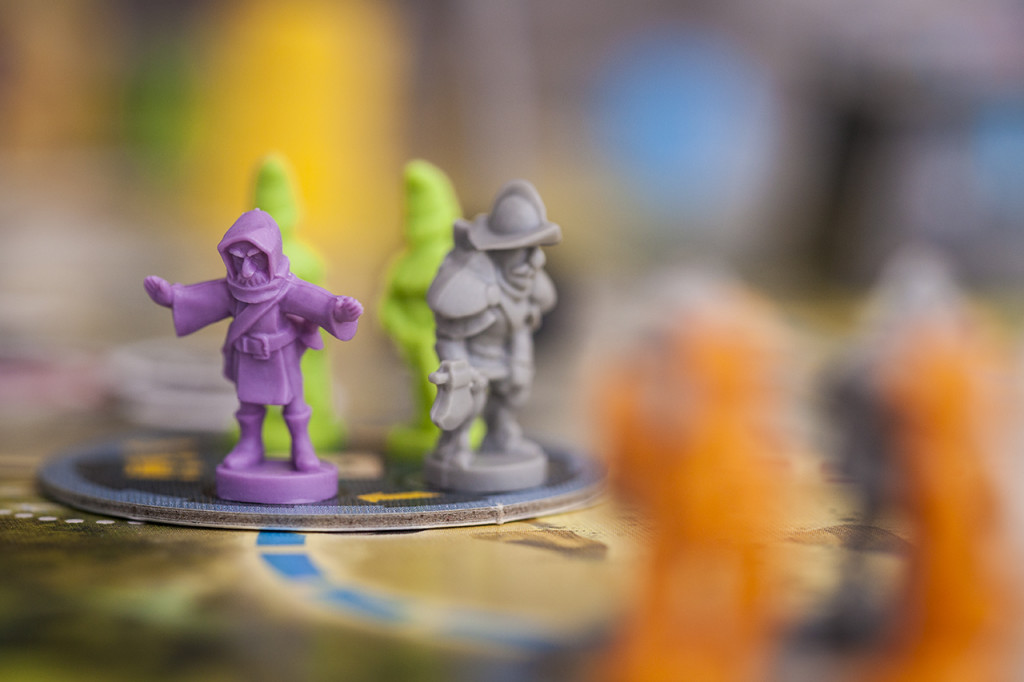 Once everyone has locked in their actions, players reveal their boards and perform the chosen selections one step at a time in turn order around the table. Here is where you need to be careful and pay attention while deciding on your order of operations – I can’t count the number of times I’ve had a figure or monster I needed snatched up by the player before me in turn order!

After completion of the full turn, the first player marker will pass on to the left, and players will once again program their movements for the next game year! There’s one other thing to mention at this point, though, and that is the three military censuses that occur every 3 to 4 years, depending on game length. During a census, players may choose to reveal as many units of each type from behind their screen as they desire, with the winner receiving a different bonus for each unit, from gold to bardic renown, or even a coveted mage tower to be placed on the board. You are not required to show any figures during this census, though, and it may well be worthwhile to keep your units hidden and your opponents guessing!

From the Mountains of Tibet to the Kingdom of Xidit

Unknown to me at first, Lords of Xidit is also a thematic reimplementation of the 2004 title Himalayas, in which yak-riding traders were used to bring needed supplies to snowbound villages. Keeping many of the same mechanics, such as simultaneous preprogrammed movement and the elimination-style scoring, Xidit also tweaked enough of the basic ideas to not just be another fantasy re-theme, but to stand on its own.

For those considering Lords of Xidit for their own collection, it’s easy enough to teach and learn in about five minutes or so, and the rules are straightforward to follow through the book. While it may be hard to remember to follow the Path of Destiny the first time or two that you empty a city or defeat a monster, the process should quickly become second nature and the flow helps mitigate the otherwise random nature of the tile draw. The artwork lives up to the fantastic and magical nature of the Seasons universe, and the unit figures, while small, are cute and well made with a rubbery plastic that should keep them from harm. One potential downside I feel, however, is the rather strict player count required; while you can still play with only three players, there is an additional ‘dummy’ opponent added for scoring purposes. On the other claw, this isn’t strictly a negative, as it only increases in threat when a player defeats a monster… and that player is then the one allowed to increase one of the dummy’s score tracks. Strategic choice comes into play here, as you have to balance these potential scores against your own and your opponents! 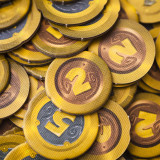 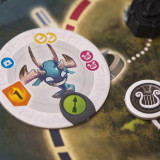 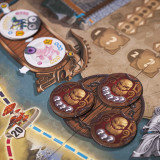 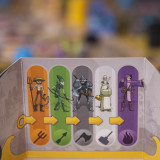 Lords of Xidit is a beautifully produced game full of vibrance and cute tiny plastic dudes. As a fan of programmed movement games — which are largely hit or miss with the group — I found a number of mechanics in this game quite refreshing. For instance, the additional preparedness, that is granted by viewing what will cycle onto the board during replenishment, reduces the chaotic feel present with most games in this genre. With this knowledge turn optimization through foresight and intuition factor heavily into your tactics, making execution of even the smallest of strategies quite gratifying. With that in mind, it’s important to note that this game can be unforgiving if you make a mistake or mis-time a movement leading to numerous “Doh!” moments. The variable end game scoring mechanism also provides an enjoyable twist reminiscent of classic Knizia games in which you are rewarded for having properly balanced a multitude of scoring elements. Lords of Xidit is the perfect game for those looking for a programmed movement game that focuses on clever tactics and maneuvers as opposed to a more topsy-turvy experience.

This game is exciting and bright and fun, yet frustrating all at once. The art on the board is brilliant and the components are brightly-colored making the game appear fun, even in the most difficult of turns. Programmed movement is a mechanic with which I struggle, as I don’t often want to pay attention to what other players are doing when I’m wrapped up in the super sweet move that I’m about to put on everyone. Unfortunately, Xidit is not always forgiving of an individual player’s lack of forethought. The other thing that I frequently struggled with while playing Lords of Xidit is that the simultaneous programming and the quickness that it brings to the game was lost when we had to take turns to activate each of our pre-programmed actions. We often got ahead of each other, as opposed to still waiting our turn and it became quite confusing when trying to ensure that everyone had carried out their plans in the correct order and in full. I found the scoring to be very helpful in keeping a somewhat balanced game—all of the players know in which order the types of points will be counted—but the fact that there is an elimination in each of the scoring categories helps to ensure that all players balance their gameplay and try to score in all three categories. Overall, while not necessarily at the top of my stack, I’ve found Xidit to be a nice addition to game nights and a nice check on my impulsivity.

Objectively, Xidit creates an ease of play that is not found in a lot of programmed-movement games. It facilitates quick decision making and mitigates randomness with the rotating display of recruits and monsters. Everything within the design works to take the difficulty out of the components on the board and place it squarely on the components around the board—your competitors. I’ve found that success in Xidit comes from capitalizing on the moves you know you can successfully take and hedging your bets at all other times. Typically, as I remember to my dismay each time this hits the table, your first move—the one that looks the best—is typically the worst option, as you’ll be left grasping at the scent of a recruit or monster gone by. It’s an interesting challenge and one that you’ll quickly recognize as being the true essence of Lords of Xidit. The question then becomes whether you rise to the challenge, or simply lay back in the grassy meadow of the fantasy landscape and wait for someone else to save the realm. For me personally, I find myself preferring the power nap.