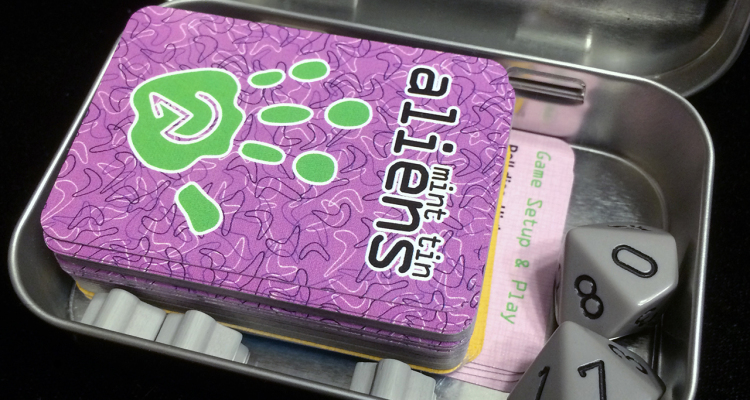 Bright lights are zooming across the night sky, all of the cows are gone, the fields are flattened, and I have no idea how I even got here!  What is going on?!  The “Fearless Alien Recruits in Training” (yes, F.A.R.T.) program must be underway.  Now this place will be swarming with skinny gray dudes trying to prove themselves by controlling our minds and stealing our cattle!

Mint Tin Aliens is a two-player set collection and hand management game by David Miller and subQuark.com. Players are two aspiring alien recruits competing to become the next invasion leader. How do they prove their capability? By gathering sets of cards containing cows, brains, UFOs, and crop circles to trade in for merit rewards.

The most obvious (and coolest thing) about this game is that it literally fits in a mint tin! The deck of 66 mini cards, three teeny-tiny meeples, and two ten-sided dice can all fit in your pocket and be ready at a moment’s notice to play just about anywhere. You won’t find elaborate custom dice or plastic alien miniatures here, but all of the components are of good quality. An effort was made to source most of the components in the U.S., which is unusual, but commendable!

The artwork and graphic design is simple and gets the job done. It communicates the alien theme and allows for smooth, intuitive gameplay. There aren’t that many alien abduction-themed games out there, so this is a unique choice. That being said, the game would have worked just as well with pretty much any theme. 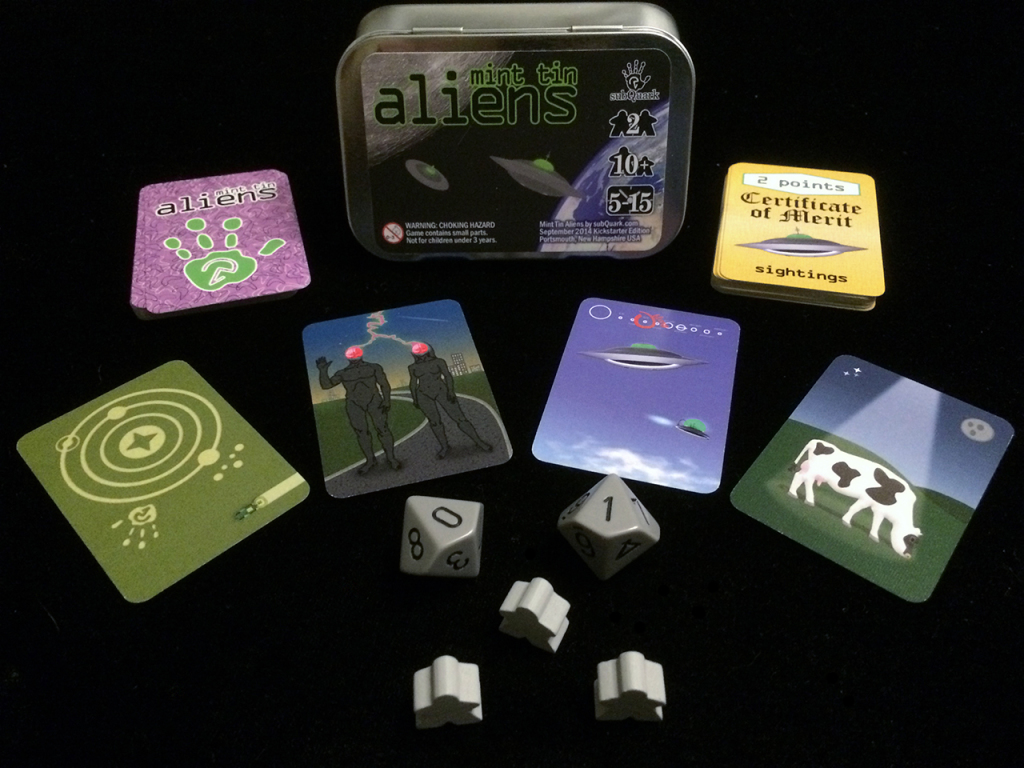 The set up for Mint Tin Aliens is quick. Merit Reward cards are placed out in their respective piles. Resource cards (consisting of Crop Circles, UFOs, Cows, Brains, and Moolti-passes a.k.a. Wild card) are shuffled. Each player gets a hand of four or five cards, depending on turn order, and places their Saucer die to the ‘10’. Finally, five face-up cards are placed in the central row. The remaining Resource cards are left in a face-down draw pile.

Players must attempt to collect sets of Resource cards throughout the game in order to trade them in for the various merit rewards. On a turn, each player must draw two cards, either from the central row, the face-down pile, or a combination of the two. A face-up Moolti-pass counts as both draws, if a player chooses to take one. These cards are then traded in for a corresponding certificate of merit. Some merit rewards are harder to collect than others. For example, the ‘Mind Control’ reward takes four Brain cards, while “sightings” only takes two UFO cards. On top of that, the distribution of the resource cards in the deck makes the hardest rewards even harder to get. The Cow and Brain cards are more scarce than the Crop Circles and UFOs. There are also Extra Credit awards that players can collect by cashing in two identical resource cards. This low-hanging fruit is worth only one point, but comes in handy because players are required to collect a reward on each turn. If a player is unable to to do so, their Saucer die will move down one level and provide one less point in endgame scoring.

The first player to collect one of every type of Merit Reward (Sightings, We’re Here, Abduction, and Mind Control) receives two gray meeples, each worth one point at the end of the game. The second player to accomplish this task gets one gray meeple. Play continues until all Merit Rewards have been collected. Players then count up the points from their Saucer die, Merit Reward cards, and meeples and the player with the most points wins the game. 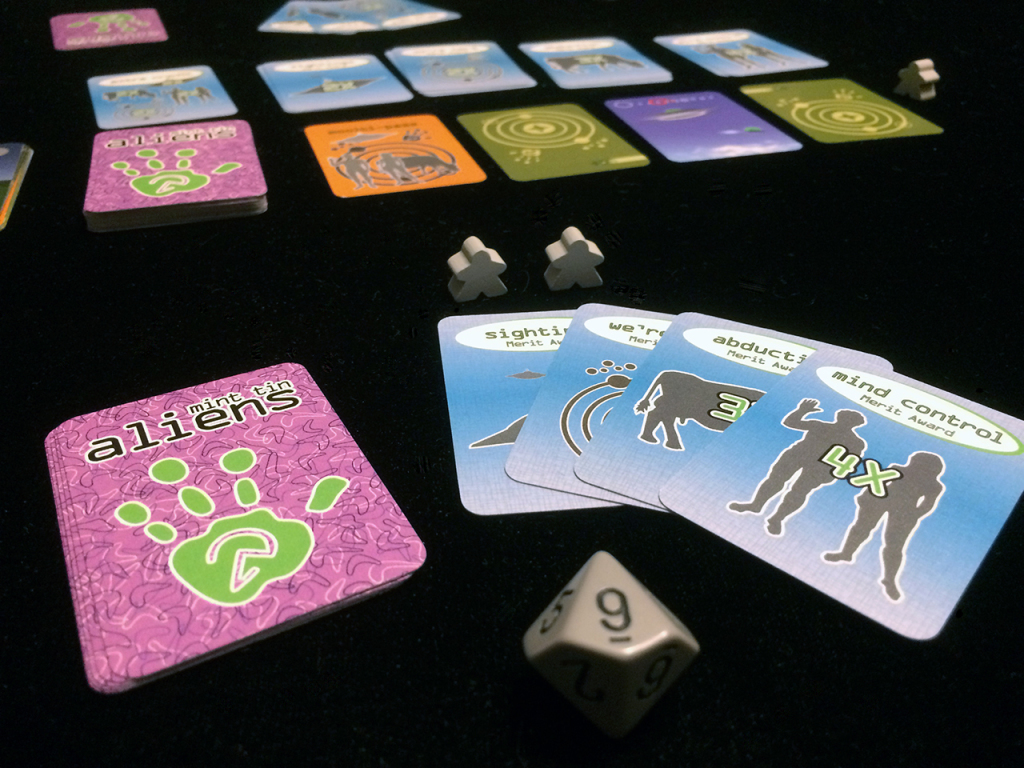 Mint Tin Aliens immediately reminded me of one of my very favorite two-player games: Jaipur. The way you collect resources from a central row of cards and trade them in for bonuses feels very familiar, but in a good way. The Moolti-pass cards work much in the same way as wild cards do in Ticket to Ride. Familiarity abound, but there are twists. The added bonuses of the Saucer die and gray meeples work well and help separate this game from its predecessors. I enjoyed the tension of having to complete sets every turn; it makes it risky to draw random cards, but when that Hail Mary pays off, it’s a great feeling! Because of the extremely small size I have been taking Mint Tin Aliens everywhere I go. It’s the perfect length for a lunchtime game. I would recommend it for anyone who enjoys set collection and is looking to fit a substantial game in a very short amount of time!

The League of Nonsensical Gamers would like to thank David Miller for kindly providing us with a prototype of Mint Tin Aliens for this preview.

Mint Tin Aliens is currently funding over on Kickstarter, along with Mint Tin Pirates. If this game piques your interests, head on over to the campaign page by Oct 26, 2014 to slip a copy into your pocket. For $14, you’ll get a copy of the game of your choice, or for $24 you can pick up both!