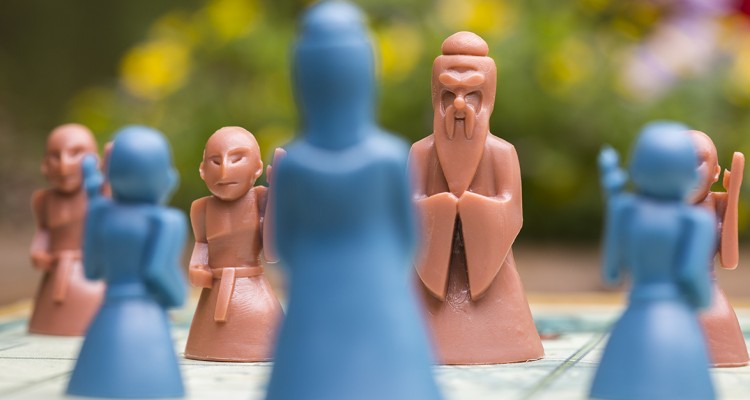 Embark now on your quest to demonstrate your power in becoming the strongest, fiercest Master. You must command your monks, skilled in the ways of martial arts, to capture your enemy or overtake his temple. Will you defeat him in the way of the Dragon, or perhaps channel the fury of the Boar? No matter the methods, the battle has begun. 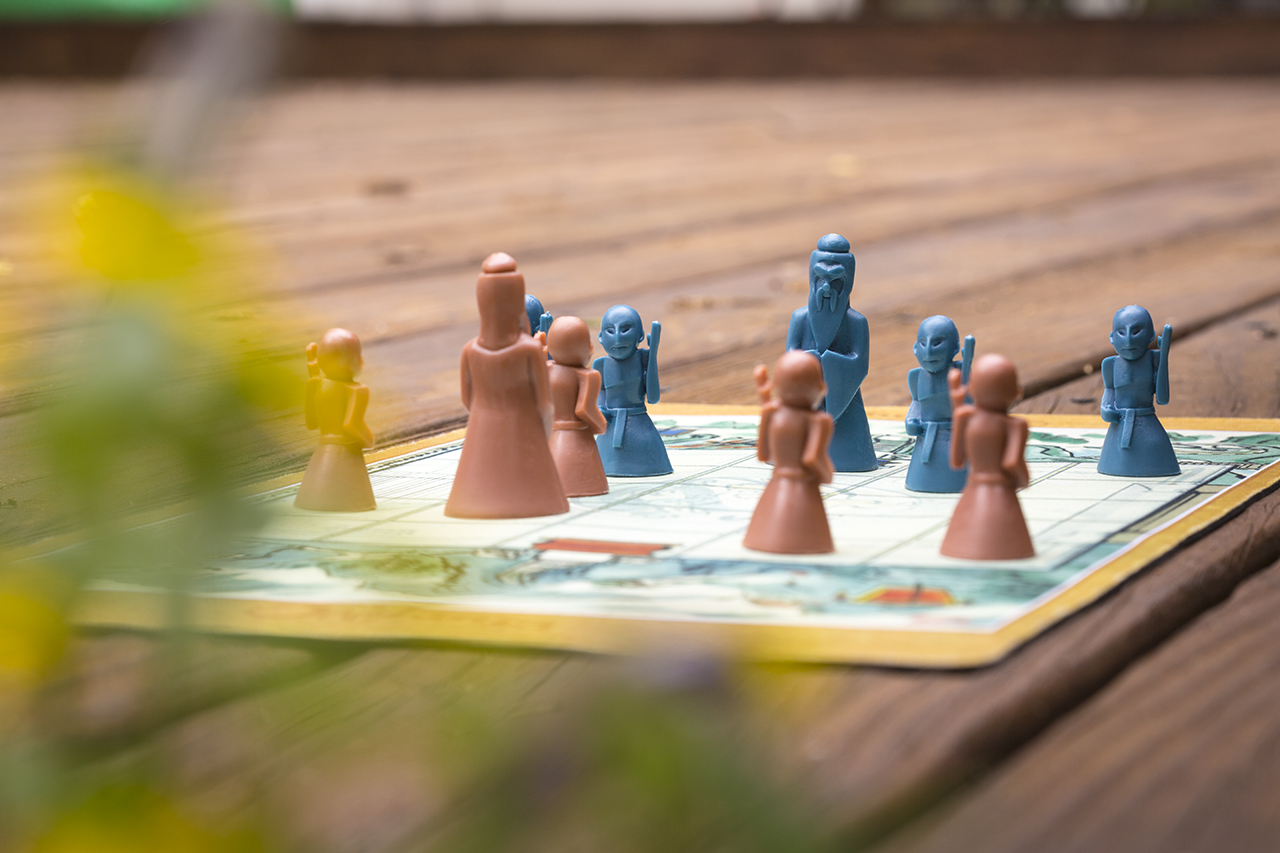 Onitama is a two-player abstract strategy game from designer Shimpei Sato with art by Jun Kondo. The game is featured in Arcane Wonders’ Dice Tower Essentials line and was a Golden Geek Best Abstract Board Game Nominee in 2014. The production value of Arcane Wonders’ release of Onitama is stellar; the game consists of 10 heavy plastic pawns and a printed play mat instead of a board, and the movement cards used for gameplay are simple and elegant, with a clear design utilizing the tarot card sized space.

The game is simple. Each player has 4 monks and a Master as their pieces, and starts with two movement cards with a fifth placed between them. These five cards contain your movement options for the entire game, but during your turn, you may only use the formation from one of your two cards. When doing so, you may move any of your pawns on the board, but you cannot land on the same space as one of your own pawns, nor can you move off of the board. If you land on the same space as one of your opponent’s pawns, that pawn (whether monk or Master) is captured and removed from the board. Once your turn has been resolved, you then place the movement card that you used between yourself and your opponent and take the free one. Play progresses this way with players rotating movement cards as they’re used, until someone’s Master has been captured or has moved into their opponent’s Temple space. 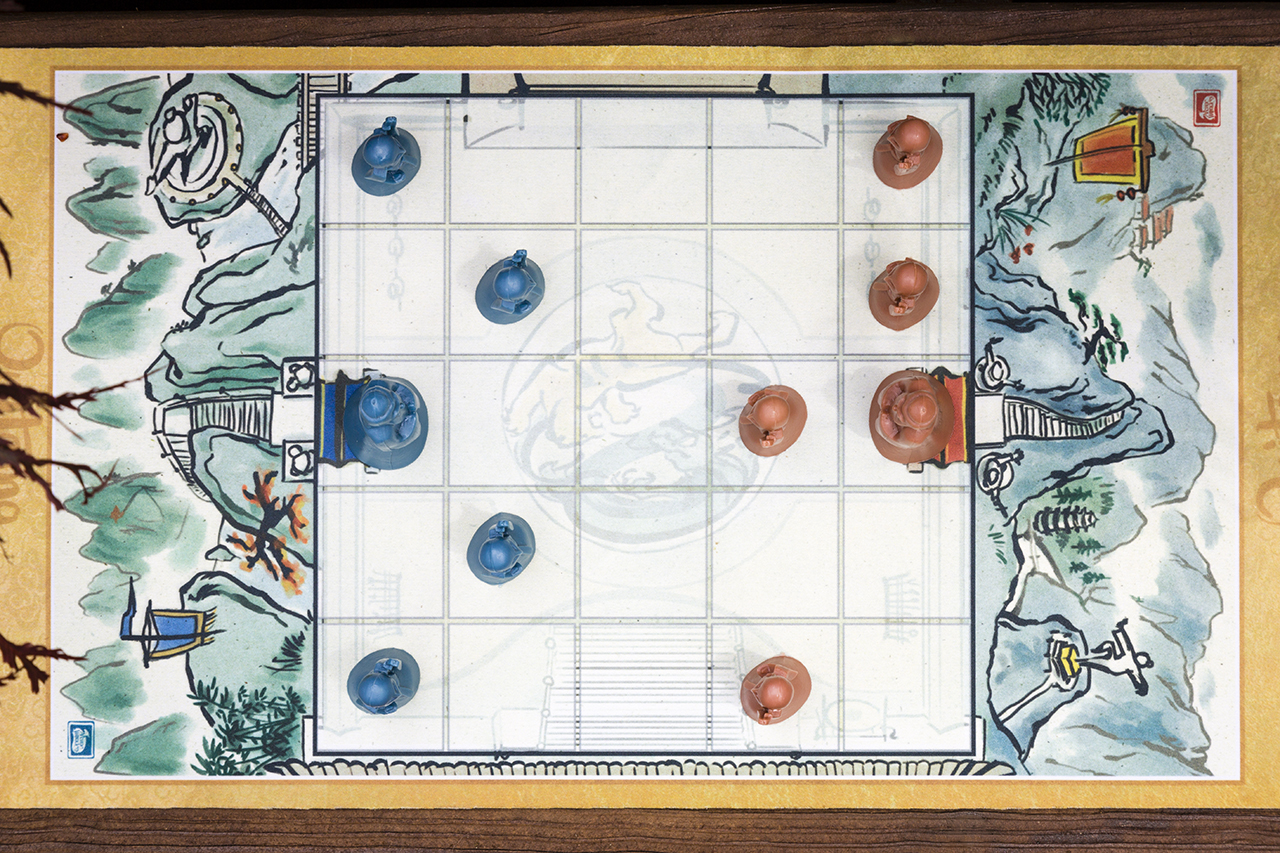 Onitama is a super easy game to learn, however it is not always an easy game to play. Each turn you’re faced with not only making the decision of where to move your pawn, but also the decision of which moves you may be forced into making available to your opponent on their future turns. Playing Onitama requires that you pay attention. While the game box boasts that a game is played in 10-15 minutes, we have had several plays exceeding that time as players struggle to weigh the likelihood of various attacks against them. This opens up another level of the decision-making during the game: when should you sacrifice a monk to try to get ahead? Keeping all of your pieces might be nice, but it’s unlikely that you’ll be able to do it and still make any progress against your opponent. In the same vein, should you try to capture your enemy’s Master, or would it be easier to get into his temple? For such a simple game, you have a lot of decisions to make. Even though you’re limited to the same five moves throughout the game, your options and opportunities can change quite a bit from turn to turn, and you may find your strategy has been for naught.

Overall, Onitama is absolutely wonderful. The game looks great and is easily transported for wherever you’re looking to game. It can quickly and easily be taught to players of all skill levels and provides a challenge without totally melting your brain. I think the only reason I might have for disliking this game is if my Master is defeated. 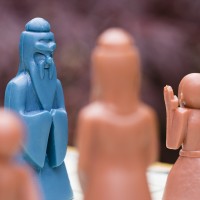 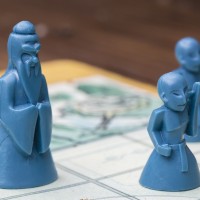 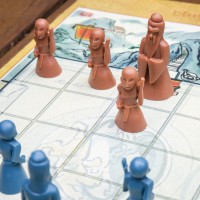 Onitama is a surprisingly simple, yet tough to master game; in this way, it feels a lot like Chess. Players are trying to eliminate each other’s “big dude” or get their own “big dude” onto the opposing Temple Arch located on the other side of the board. The twist comes in when you and your opponent only have the use of five movement cards that are randomly drawn from the deck. The addition of these cards to the game offers a ton of variety and replay value to Onitama. These cards are open information and they will rotate around to both players as they are played. Trying to think ahead like you would in chess will have your brain on fire because of the ever changing movement options. I found it difficult to be aggressively offensive or defensive which left me unsure of my strategy each game. I found that the key to the game is balance in planning your moves and to be willing to change your end game goal from turn to turn. Onitama is a quick and clever little game that deserves attention for any level of gamer.

Onitama represents my conception of a modern abstract game. It provides meaningful tactical options and allows for long-term strategic planning, and packages it with flourish. The randomized movement options each game and the way in which their availability cycles works to deepen the game without over-complicating it. Information is perfect and there isn’t much to track individually, but the possible outcomes quickly grow when you begin to calculate several moves ahead. The two victory conditions are also nice, as they allow you to switch your goals midstream, or even bluff in one direction and claim the win the other way.

I can find no fault with Onitama, both because there isn’t a lot to get wrong here and because the aesthetic and mechanical design has been given such care that the whole package comes together flawlessly. It is a wonderful two-player game and will hopefully provide an avenue for many gamers to enter this highly rewarding subset of the game market.