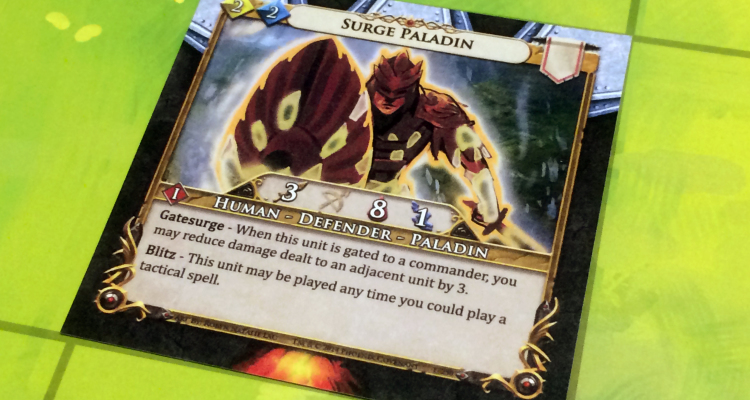 Phoenix Covenant is a head-to-head, tactical card game from Hikari Games and designers Soren Fox, Adam Porroni, Easwaran Subbaraman and Sriraman Subbaraman. Players battle on a 6×8 grid, fielding and commanding units in an effort to reduce their opponent’s 30-point life total to zero. The base game comes with four preconstructed decks (200+ cards), each containing a variety of spells, units and commanders. Starting with five cards each from their chosen deck, players execute three simple phases in which they draw a single card, gain resources, play cards, and activate cards already on the board.

The area that sets Phoenix Covenant apart from many CCG-style card games is the lack of randomness when it comes to the resources (Mana and Command).  Both players start off with dials set to zero for both resources.  Each turn, they are given two Essence to commit to either of the two resource pools, increasing the maximum amount they will receive on their turns.  This makes both resources a known quantity allowing for more precise planning based on the current game state and available cards.  This feels very strategic in the early game, but not as important near the end as you build up a healthy supply of resources. 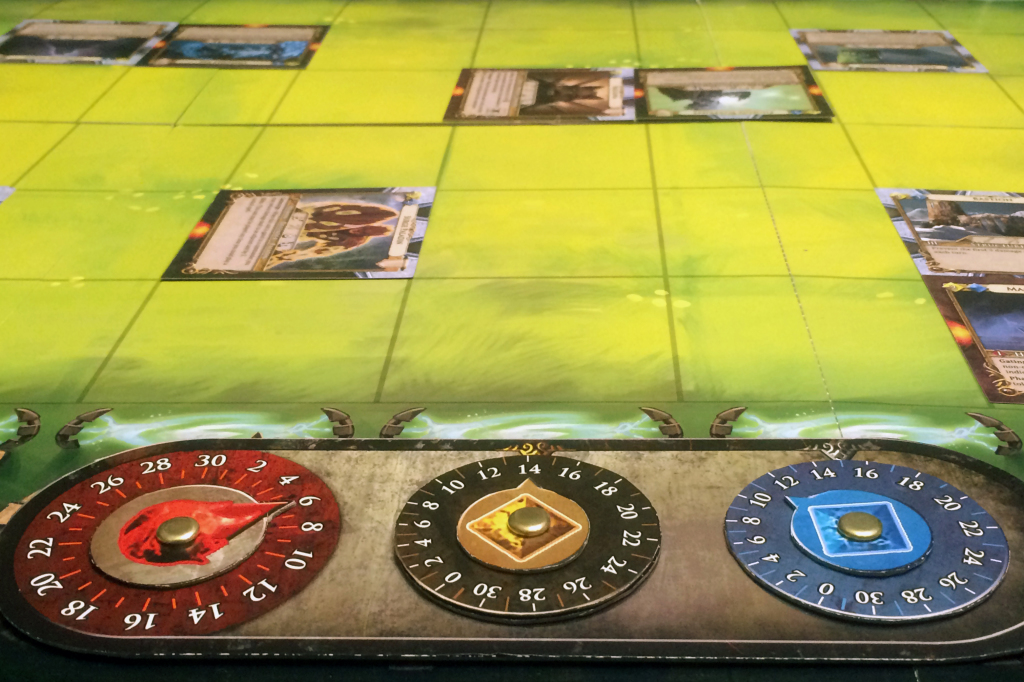 Unit activation is the focus of the game.  Units can move, turn, attack, and use special abilities according to the stats on their cards.  As every unit has a combination of armored sides, unarmored sides, and weak points, facing and location are extremely important.  Most units can only move one space at a time (including diagonally) so, the game encourages creative maneuvering. It took me a little while to wrap my brain around using the diagonal movement, but once I got going I found the tactical manipulation of the cards to be the most interesing and enjoyable aspect of the game.

Attacks (melee and ranged) can be made on the opponent’s units, structures, or even their base directly. The trick is to maneuver them to your opponent’s weak points, where more damage can be dealt.  Attacks on an armored side of a unit will only deal half of its typical damage, while attacks on a weak point will deal half again as much damage! I found myself puzzling out the different ways to position my units to get to those weak points in order to rain down destruction on my opponent.  There are also tactical spells that allow opponents to respond to attacks.  Special abilities include many useful powers such as “Mana Blast”, which boosts a player’s Mana or “Gating”, which allows players to field units beyond their home row. All of this comes together in what the designers call “mental fencing” that can last anywhere from 30–90 minutes.

Phoenix Covenant looks great on the table!  Artist Robyn Natalie Lau, has brought this original fantasy world to life with a huge, full-color board and beautiful card illustrations. The copy I received is a prototype, but even the stand-in components and artwork are well put together. Because of the way cards are maneuvered on the game board, players have to mark them with tokens to show ownership. There will also be tokens for marking damage and other bonuses.  My only complaint is that managing these tokens makes for a fair amount of upkeep and can at times feel fiddly. 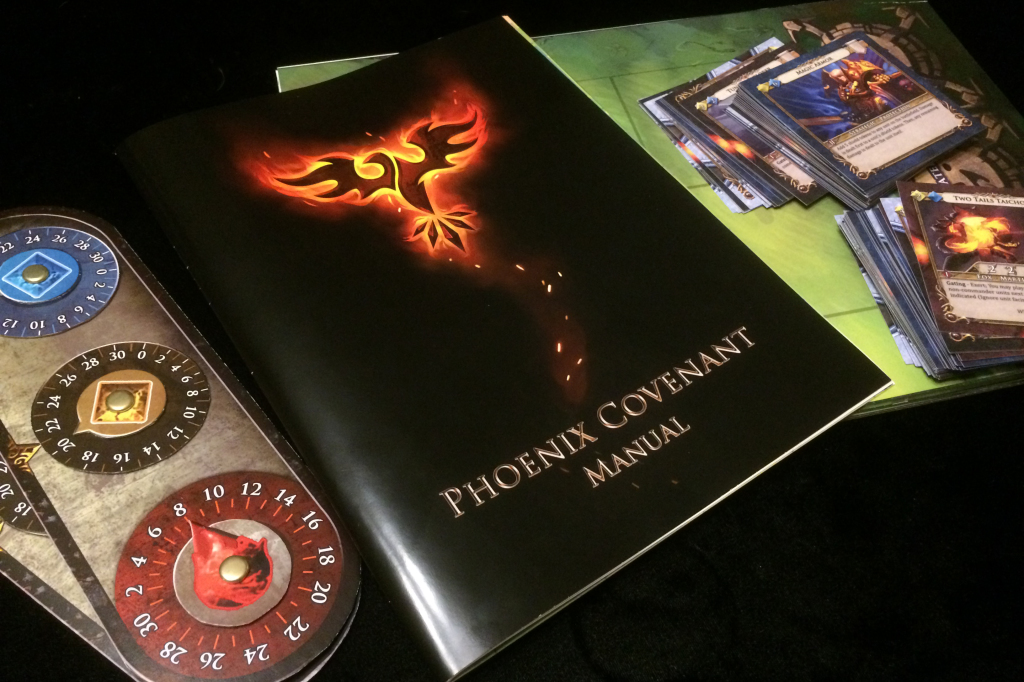 Despite having a lot of variety in how cards can interact, I was able to pick up on the basic rules with ease. The rulebook is laid out in a such a way that it introduces you to each of the mechanisms separately and there are plenty of examples to help clarify the flow of play. This can also be supplemented with the excellent gameplay video Hikari Games posted on their Kickstarter page. After running through a few pre-generated scenarios, you can have players up and running quickly.  Of course, there were plenty of things that had to be looked up in the rulebook (in particular, the timing of certain actions like refreshing the mana pool), but that is what I would expect from a game with this level of complexity. The good thing is, I was able to find all of my answers in the rulebook or within the card text. Speaking of which, some of these cards have a ton of text! This is typical for this type of game. I didn’t find it to be a problem for most cards, but there are a few that I had to read several times to understand all of my options.

Phoenix Covenant is a game that rewards multiple plays. As with most CCG-style games, knowing your deck is important for the planning and efficient use of your Mana and Command pools. It also speeds along the game play, as each of my plays went quicker and smoother than the last. The two pre-constructed decks I received seem balanced against each other, and with four decks available in the base game, there is built-in replayability. The designers encourage players to break the decks apart and deck-build to their hearts’ content, which will provide even more options.

Overall, Phoenix Covenant lives up to the description “Magic the Gathering meets Final Fantasy Tactics.” Anyone who is a fan of either of those games will enjoy this one. The card combinations and maneuvering offer a similar balance between tactics and strategy as other two-player battle games.  From a cursory glance, this game might appear very similar to that of Summoner Wars, but there is plenty different to justify playing or even owning both.

The League of Nonsensical Gamers would like to thank Hikari Games for kindly providing us with a prototype of Phoenix Covenant for this preview.

Phoenix Covenant is currently funding over on Kickstarter. If this game piques your interests, head on over to the campaign page by November 17, 2014   to claim and control your own copy. For $50, you receive a copy of the game along with all reached stretch goals.