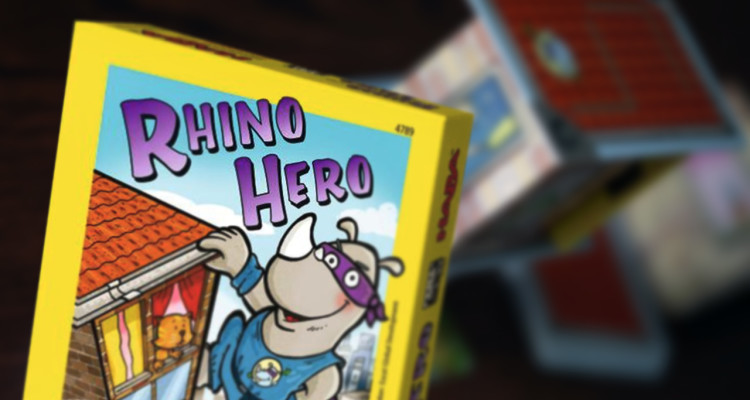 Somewhere—possibly a galaxy far, far away—an advanced civilization brought forth a race of super rhinos, whose mental and physical powers were developed to the absolute peak of rhinocerian perfection. Faster than a speeding bullet and able to leap tall buildings in a single bound, Rhino Hero is here to save the day, but unfortunately his burly stature is just as likely to cause a catastrophe as save us from one! 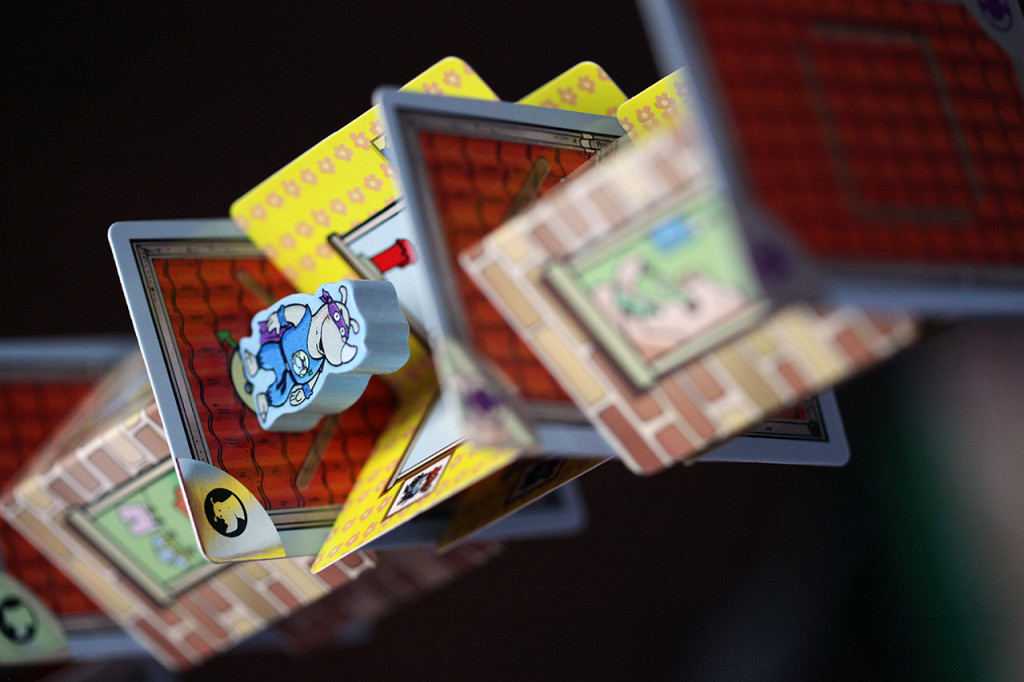 Rhino Hero is a 2-5 player card stacking, dexterity game from designers Scott Frisco and Steven Strumpf published by HABA, makers of Animal Upon Animal and a seemingly endless catalogue of awesome children’s games.

In the game, players stack up floor cards on top of folded wall cards to construct an apartment high rise. As you build up the tower, Super Rhino climbs up floor by floor. Your job is to is to be the first to build all of your floors before the heroic, yet heavy, rhineeple topples the precarious tower of cards.

Rhino Hero is the kind of game you just can’t ignore. With one set, the card tower can grow up to three feet tall! The amount of detail in the card art is commendable. Each wall card has a unique combination of anthropomorphic cats, dogs, bears, and elephants who apparently all have the same horrifying taste in wallpaper. The production value is top notch. The floor cards have fancy foil action icons and are made of thick cardstock. They will definitely hold up to many a collapse. Best of all, you can take the components out of the box and easily fit the entire game in a small dice bag or tuck box. 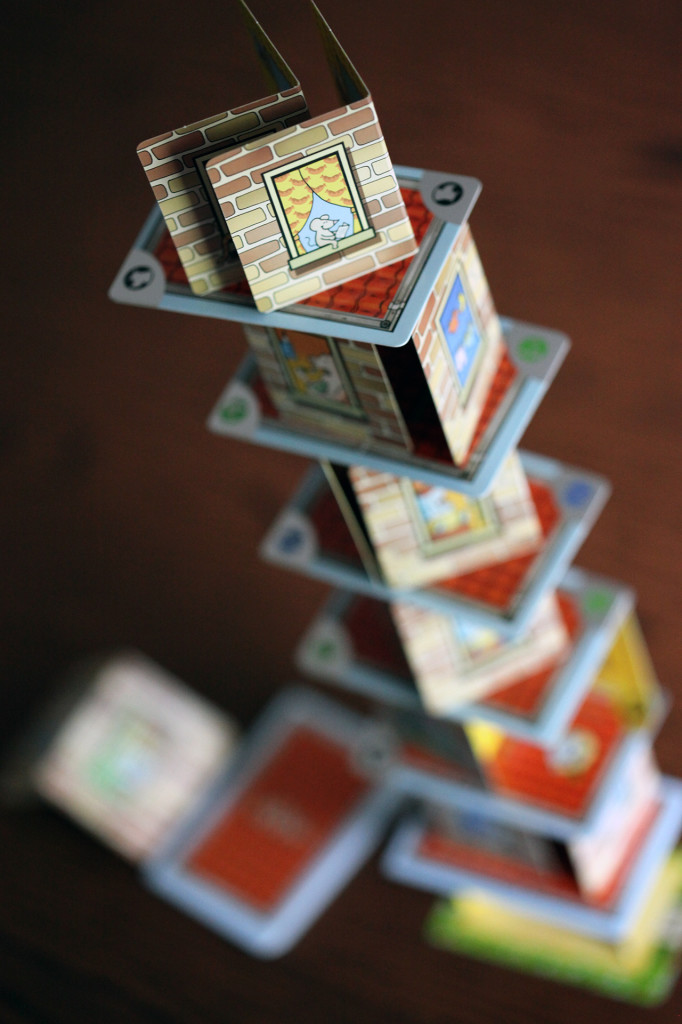 The rules are super simple. A foundation card is placed and it’s corresponding walls are built on top. Players get to choose between two foundations, a sturdier two-walled version and a one-walled version that makes things wobbly from the start. Each player is then dealt a hand of five floor cards. Start player is determined by whomever most recently did a good deed and you are ready to go! Players take turns placing floor cards and building wall cards on top of them according to the depicted blueprint. Most of the floor cards have an icon that triggers a special action once placed.

Place all of your floor cards first and you win! Of course, if you knock over the whole tower you automatically lose and the player with the fewest remaining floor cards claims the victory.

Even though it is marketed as a kids game, I have yet to come across a single person who didn’t enjoy playing Rhino Hero. I’ve seen kids play game after game. I’ve also seen hardcore gamers use it as filler while waiting for their next Feld. It’s too silly not to love! There is a little bit of take that with the ‘skip a turn’ and ‘draw an extra card’ actions that some might not appreciate, but the fun definitely outweighs any frustration. It’s a fifteen minute game about a rhinoceros super hero, so if you’re looking for a deep, strategic experience prepare yourself for disappointment. It’s a take-anywhere dexterity game that combines the nostalgia of building card houses, with a dash of Uno, adds in the tension of Animal Upon Animal, and packages it up in a small, portable box that costs less than $13. If you’re looking for a quick, silly filler that pretty much anyone could play, look no further!

Rhino Hero is—at least for me—all about taunting your friends as they gingerly place cards with shaky fingers. I love the wide-eyed expressions, gasps, and squeals this game provokes as the unsteady tower wavers close to destruction. If you’re feeling creative, there’s plenty of room for advanced variants. Adding in a second copy of the game for the possibility of building to unimaginable heights or playing with chopsticks both seem like equally hilarious options. Bottom line, Rhino Hero is awesome!

If you had asked me, sight-unseen, if I wanted to play a game called ‘Rhino Hero’, I’d probably call you bloody crazy. One look at the cards and a brief description of the mechanics was good enough to get me to change my mind, however. The game is quick and fun, with engaging graphical design and a quirky charm. Two thumbs up in the (Very) Light Game category!

I typically steer clear of dexterity games – my hand eye coordination and fine motor skills are variable at best – but who can resist a cute little rhineeple and the opportunity to build the tallest of card towers?! The game is very simple and fast-paced: you can easily play in a few minutes and new players can be taught with ease, so as not have anyone left out of the action. Do I want to play this game all night every game night? No – because my hands shake horribly and I’m tremendously nervous that the collapse of our tower will be my fault. Between games while we deliberate our next play, though? I’m all for throwing this one to the table. The ability to switch up placement with the special powers on the cards keeps the game interesting. You never know when play will be reversed or you’ll be skipped, only to face a much taller, wobblier tower when play reaches you again. And placing the Rhino Hero is nothing if not nerve-wracking. You can watch the tower wobble on card placement, but that [comparably] heavy rhineeple makes you hold your breath and will every nerve in your body to just chill out for one second so you can be as steady as possible. Overall, this is definitely a great play and it’s one that can easily be enjoyed with a mixed group!

Here he comes to save the day! Rhino Hero is on his way! And if he isn’t, I highly recommend you search out a copy of this charming card stacking filler game from the masters over at HABA. This “kids” game is sure to captivate any audience as evidenced by its sold out status at this year’s Gen Con (it was personally my game of the convention as well). I have yet to meet anyone who has not enjoyed the light-hearted tension created from stacking these beautifully made cards. While billed loosely as a competitive game, this game is never taken too serious. Most of the time we do not even determine a winner, merely heckle the person who knocked it over and start up a new game to try and amass an even higher tower next time around.