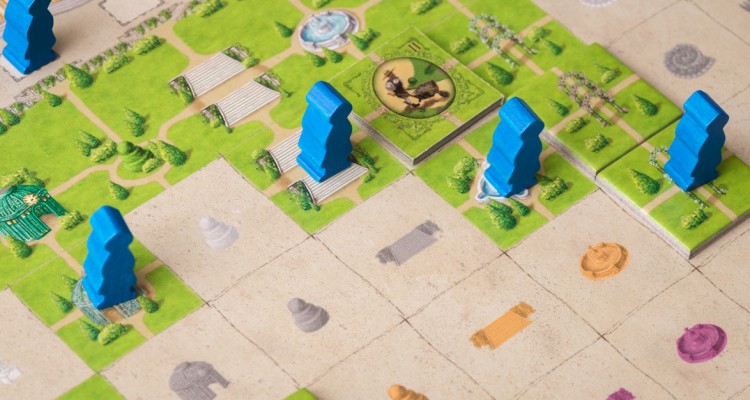 If there is one thing that French nobles cannot resist, it is elegant gardens for them to meander through; Sanssouci proves this by having players selecting and placing features in their own personal garden in a bid to entice these fancy noblemen and women to stop and smell the roses. In true aristocratic fashion, though, they prefer paths that contain their favorite garden features while avoiding those sweaty, ghastly gardeners in the process. If your landscaping and legwork is successful, the nobles will find their way clear across your garden, viewing every fountain, statue, and the like along the way, thus making your botanicals the talk of society!

Put on Your Fancy Pants

Sanssouci is a card driven, tile laying puzzle game for 2-4 players, designed by Michael Kiesling and with artwork by Herald Lieske. The game’s components are about what you would come to expect for any modern game purchase, with thick cardboard player boards and lots and lots of tiles. Player count will dictate which tiles will be used, so planning ahead and bagging the tiles by their tiny roman numeral will ensure a speedier setup. The player pieces, ‘nobleeples,’ are not your typical meeple shape either; they actually look like they might be wearing their fancy pants! 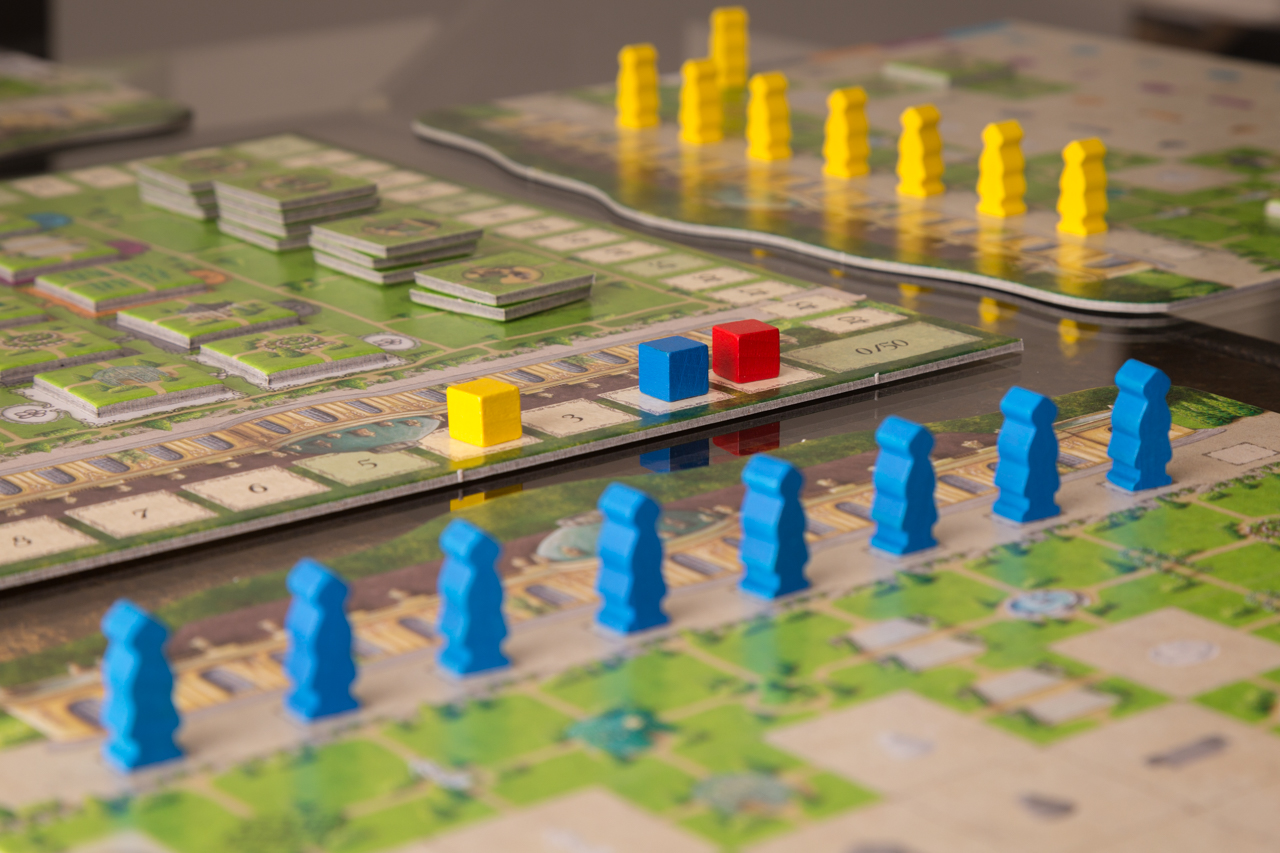 The game is played over 18 rounds, with players first playing one card from their hand to select a tile from the central board, adding it to their personal garden, and then moving one noble of their choice. Each player has an identical deck of (you guessed it, 18 cards), and will have a hand of two to choose from at any one time. There are nine different garden features, and five different colors to contend with, so the layout of the central board dictates the color of the space in which the tile may be placed on your garden board. For example, if you select the Trellis from the orange row on the central board, then you will need to place it on the orange Trellis square in your garden. If the selected tile is already built on your board, you can then instead flip the tile and place it as a gardener in the row or the column that the original feature occupied. Gardeners are essentially wild cards that help you complete pathways, but nobles think they disturb the view, so cannot stop on such a tile.

Sanssouci can essentially feel like a solo experience with an occasional, fist shaking moment…

Once you have placed your tile, you then choose and move any noble down their respective connected path as far as you like, pushing them one step closer to the garden edge (but they aren’t about to break, this is what they live for). The row on which you stop is the number of points that you earn for the move, making it important to consider the number of turns remaining in the game, and how long you can spend admiring the scenery. The game ends once all players have played all of their cards. End game goals are revealed and scored (each player received two at the beginning of the game), along with bonus points for any completed garden rows or columns.

The base game also contains a mini expansion that adds a little more strategy and scoring opportunities, but we felt that they really didn’t add much to the game play. It is a good way to shake things up now and then, but it’s really not essential.

It’s About the Journey, Not the Destination

Playing Sanssouci can essentially feel like a solo experience with an occasional, fist-shaking moment, as an opponent takes that blue statue tile you wanted to grab. Otherwise, players will spend most of the time staring at the changing central board hoping things end up in their favor by the time the turn comes around again. Planning ahead for your secret end game objectives is essential, but you really cannot predict the random card draws or tile selection options, so you may have better luck simply optimizing elsewhere. I love games where you can generally plan ahead, but the playing field constantly stays leveled for all players as well. You usually don’t find yourself scanning the other boards and taking a tile that the next player may need, but it can become a strategy if your selections become limited and really don’t offer much benefit to you.

Tile acquisition aside, the next battle is deciding which noble to move and how far to move them. Instinct would tell you to move them as far as possible, but the slower your pace, the more points you will have the chance to accumulate. I have found in my Sanssouci career that you have a better chance at winning if you keep pace with everyone else on the score track. While your nobles are free to meander as they will, taking circuitous paths through the garden, the bonus points for completing rows and direct column paths can possibly push you over the top for the win. 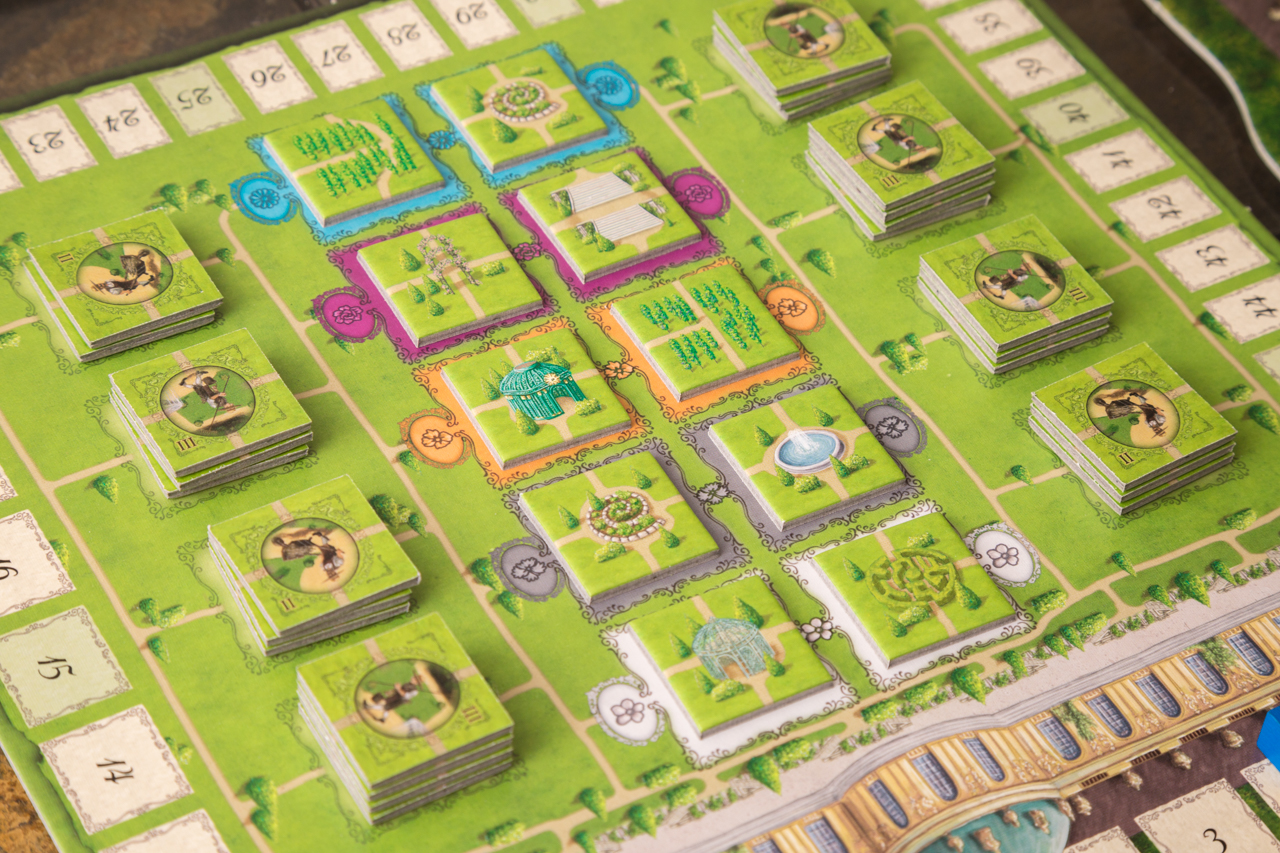 While Sansoucci is a strategy game wrapped in a puzzle, it has a fair amount of randomness that players must adjust to. You are always at the mercy of your cards in hand and the current board state. While there are cards that will allow you to fetch any one specific feature from the central board, you are still required respect the color requirements when placing it. Sometimes you may feel like you are wasting a turn just because your options really do not conform to your current gardening goals, but this is a place where the completed rows/columns scoring can come into play; sure, you may not have moved a noble, but you just filled in a much-needed hole in one of those categories. There are also moments where you may have many options available to you but you are not sure which option to take, which can make the selection also just as difficult. Thinking on your toes is almost always required in Sanssouci.

Randomness aside, I really love playing this game. It really feels like a grown-up version of Karuba (if you haven’t played Karuba, go play it now!). It is firmly a mid weight game, leaning more to the lighter side of things. It is very easy to teach and you can get playing pretty quickly after a brief rundown of a turn. I find it best played right after that big featured euro game to help wind things down a bit. Except for some frustrations due to the options available on your turn, Sanssouci is a tranquil and laid back experience that will have you stopping to smell the gaming roses for 30-45 mins. 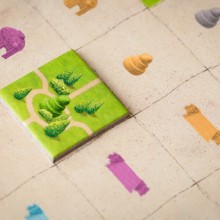 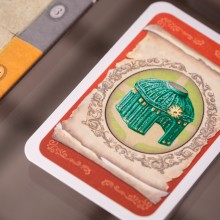 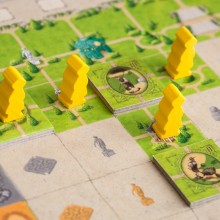 Sanssouci is not particularly excited aesthetically, but it does compensate for its average euro looks with unique gameplay. The decisions each turn are small, but they add up across the game in a significant way, making additional plays much more satisfying as you hone in the proper balance between garden movement and point-grabbing. Occasionally the randomness in your card draw will compound the randomness in the available tiles, but the design generally offers you a meaningful choice each turn without issue. Sanssouci is like gaming comfort food; you know the recipe by heart, can put it all together in a reasonable amount of time, and are left content after it’s all said-and-done. Given the sale prices it often receives online, I wouldn’t hesitate to pick up a copy if you’re at all interested in roaming around a garden maze sometime.

I think that Sanssouci is an excellent puzzle that presents a little bit more, or rather a slightly different, challenge than Karuba. It’s easy enough to understand the basics of how to play, but that doesn’t necessarily help when you’re faced with the decision of which tile to pick so that you use your cards efficiently and so that you’re going to eventually make a good path. The option of taking any tile if your cards don’t match is a nice security blanket but the gardeners won’t let you share a space with them so they can still mess you up. I really enjoy the variety of options that this game gives you from turn to turn, even if they occasionally present players with analysis paralysis that can take away from its lighter weight and generally shorter play time.

First Impression: In Sanssouci, it is the journey, and not the destination that matters. I realized this in the last few rounds of the game as I was happily ahead on the score track, and all of my nobles were partying at the far end of the garden. With no more plays to be made, I watched my lead shrink with a creeping sense of horror, powerless to stop the decline. Rookie mistake, perhaps, but it’s an interesting lesson, and overall I enjoyed the pace of the game. Some part of me wishes for asymmetrical tiles, though, so that not every path connects…

Sanssouci was a game I picked up on a whim at Origins 2015 and I am happy to say that, in the sea of mediocrity that has flooded my collection since then, it has found a permanent place on my shelf. Much like its theme, Sanssouci aims to provide a soothing escape as you breeze through its enjoyable puzzle. If you’re looking for high levels of player interactions this is not the game for you. Outside of intentionally (or even unintentionally) taking a tile that another play had their eyes on, this is largely an exercise in multi-player solitaire. Lady Luck can and will rear her ugly head in the form of tile draw, forcing a number of constrained decisions but, for the most part, I am able to plot a long term path (literally!) and stay the course throughout the game. I relish those “eureka” moments when you overcome a tactical obstacle and figure out an optimum path for your pawn. The artwork unfortunately does little to help draw in wandering eyes around the room. However, with its simple ruleset, perfect depth-to-playtime ratio and a different enigma to solve each and every game, Sanssouci offers an pleasant experience for gamers of all ilk.