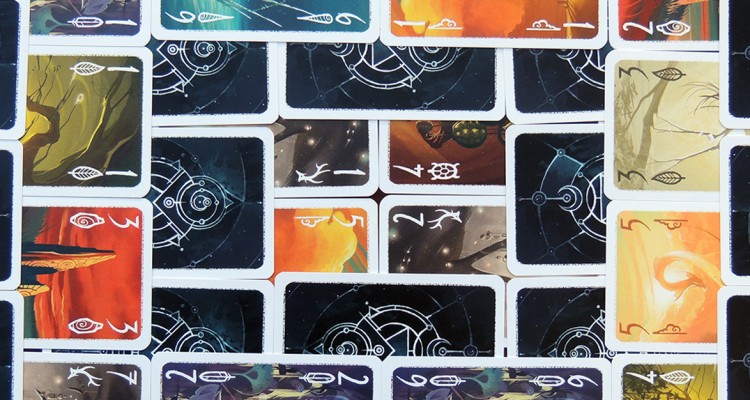 Behold the ancient Siggil, a snare for spirits from a long-forgotten age, where those bound were to be locked away for eternity. Now, however, the time has come to set them free… but not for long. You must capture them, bind them anew before they escape. Make these spirits your own.

Siggil immediately grabs its players with organic, captivating art by Maud Chalmel, a key point when the game, and your focus, solely rests on these cards. Seven families make up the contents of the deck, each centered upon an earthy element — leaves, turtles, seashells — with the cards each displaying a fantastical depiction of the family crest while being numbered from one to seven. Along with the family sets, there are also seven spirit cards: one spirit from each family. Your goal will be to capture the spirits by collecting sets within the matching family or of different families with matching numbers. 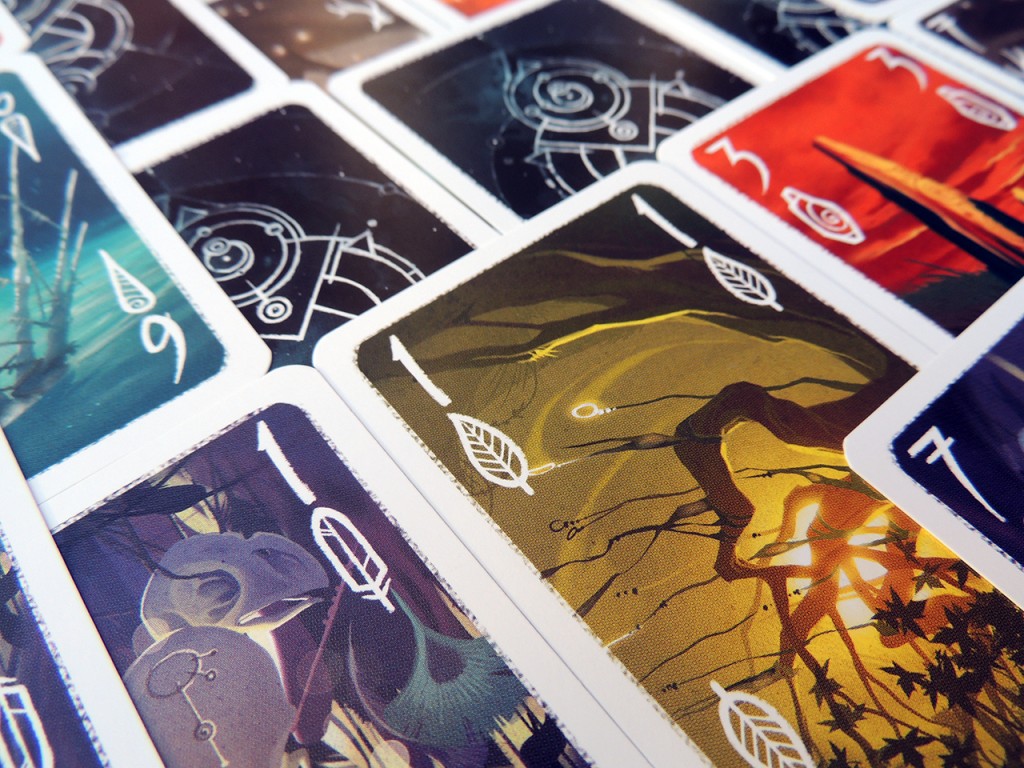 Setting up the game is reminiscent of playing solitaire Mahjong on the computer—the placement of the cards alternates between face-up and face-down as they overlap one another, providing several layers for you to pick through and explore. As you and your opponents take cards from the Siggil into your hand, slowly wearing it down, other cards are exposed to create new opportunities for capturing a spirit. When a spirit card is exposed, it is released from the Siggil and is now vulnerable to being captured by you or your opponents. A minimum set size of three is required to capture a spirit, and once you have these cards in hand, you may play them to the table and collect the corresponding free spirit (either matching your set by number or family to the spirit you are capturing). Be on guard, however, as another player may steal one of your hard-won spirits with a larger set of their own! When one player has caught enough spirits (which depends upon the group size), your mission is complete and the game is over.

We’ve Got Spirit, Yes We Do

The game comes with several configurations in the rules that allow you to vary the shape of the Siggil and how the sequence of cards unfolds. However, given the quick playing time, this variation feels more like a necessity than a bonus. I will say I was disappointed when looking through the BGG forums that there were not more player-created configurations by which I could lay out my cards. Despite the limited options presented by the creators for set-up, the fact that the spirit and family cards are shuffled together each game still allows the experience to feel different and interesting from game to game, even with the same configuration. 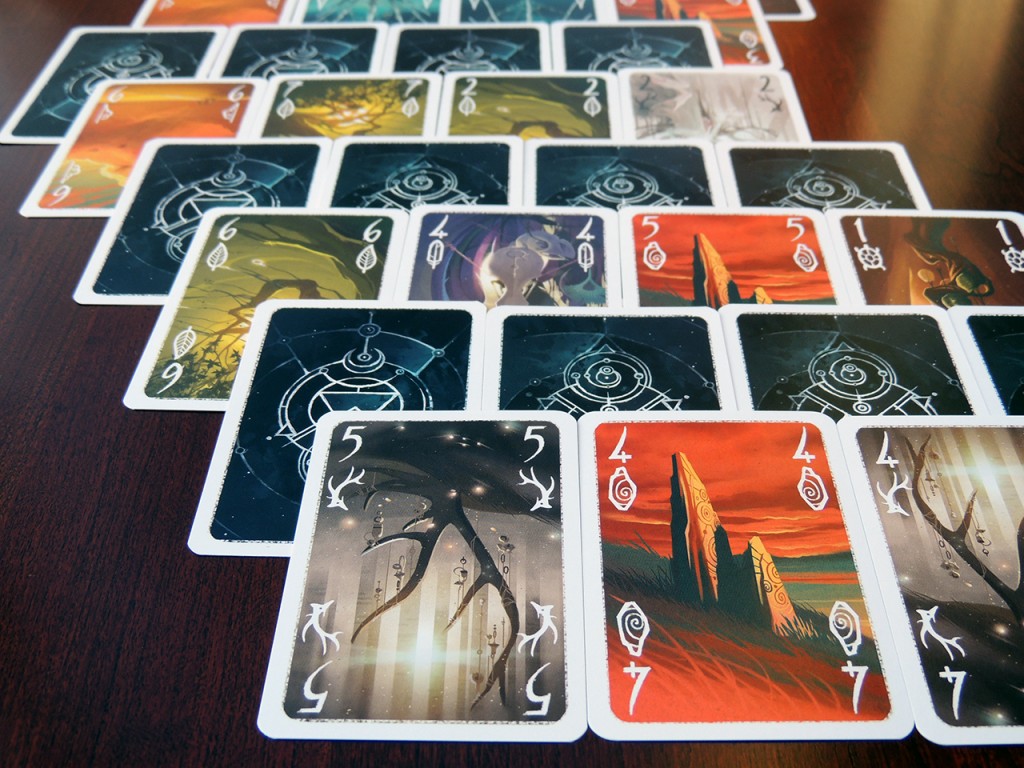 While you technically have perfect information, in that the entire deck is used for each game and you can observe the cards your opponents are drawing, the fact that half of the cards in the game are hidden creates and maintains an obstacle of uncertainty in not knowing where to find that one card that you need to capture your next spirit. Challenging decisions can be had at times, when you’re torn between racing opponents to finish the set you’ve started and simply switching gears to another available spirit. Your ability to steal spirits from opponents (and theirs from you) also forces consideration of the cards being played. When stealing a spirit, you may play a set that is one card greater than that of whomever you’re stealing from. However, if you’ve had your spirit stolen and you’d like it back, you have to build upon the set you originally used, and strengthen it to exceed the opponent who captured it from you. This introduces the possible strategy of taking extra cards in a set you’ve already built so you have some spirit insurance.

Perhaps one of my favorite things about this game, though, is that I can play it by myself. Siggil comes with single-player rules that force you to limit the available spirit and family cards. The solitaire game then pushes you to act with efficiency so as to capture spirits as you face them, rather than just hoarding family cards.

Overall, Siggil presents as a fairly simple set collection game, but that does not negate the fact that it still requires thoughtful play. It is easy enough that it can be taught to gamers of all levels, while still providing a challenge for those who play a little harder. And, for those with a more competitive nature, the spirit theft mechanic allows for a bit of take-that gameplay, especially in games with a higher player count where spirit acquisition is limited. 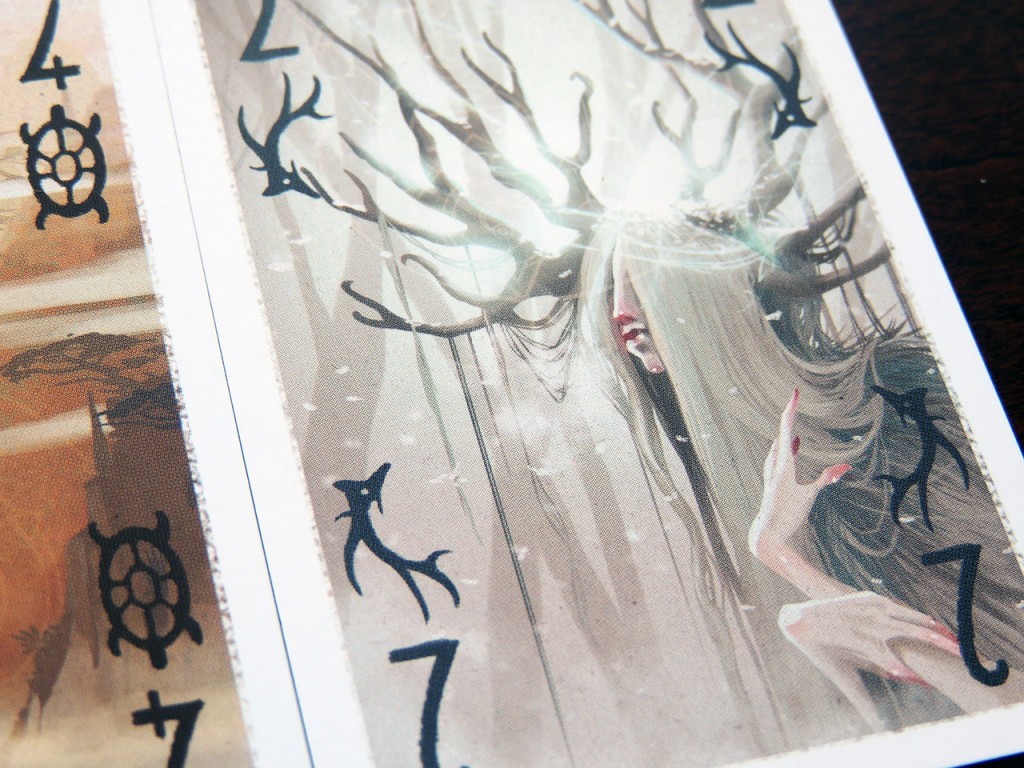 I have played Siggil a couple of times, once as a two-player game and another with four. The two-player variant offers a challenging yet fun head-to-head battle as you try to guess what set your opponent is after while still setting up your own moves in-hand. With four players it was a race to the finish that ended very abruptly; there were too many things to keep track of and the cards disappeared from the Siggil quickly hindering the development of a good strategy. I really enjoy the different illustrations, card layouts and drafting elements. If you stick with only the two-player variant this game is a gem.

Siggil has not quite hit the mainstream market, but it is definitely a title to keep an eye out for. The simplicity of the gameplay and the short play time make it great addition to your filler-game collection. The concept is easy—draft and collect sets—but the randomization of the cards and the variation in opening set-up makes each game rich with tactical decision-making. I agree with the others that the game is radically different between the minimum and maximum player counts, but find it acceptable if you already hold that expectation. I find it strongest as a two-player game, where both players can more directly counter and anticipate each other, but the fast pace and scarcity provided by the four-player compliment is still enjoyable. I’m happy to own Siggil and look forward to experimenting further with unique setup designs.