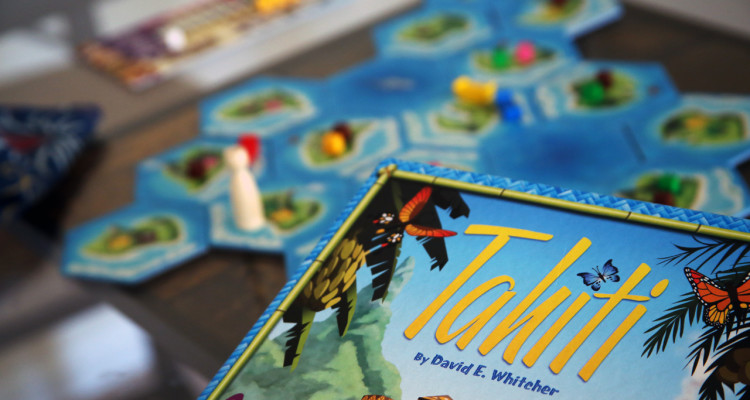 Tahiti is a fun little game that involves the player taking on the role of a tribesman (Tahitian?) who needs to gather food. The player will row to gather fish and produce, then travel back to the home island, traversing dangerous reefs to deliver the goods. You will be aided by the goddess Haumea, who will help you discover the nearby islands where these goods can be found. You need to collect as many as you can before the season ends and the island’s bounties are depleted. 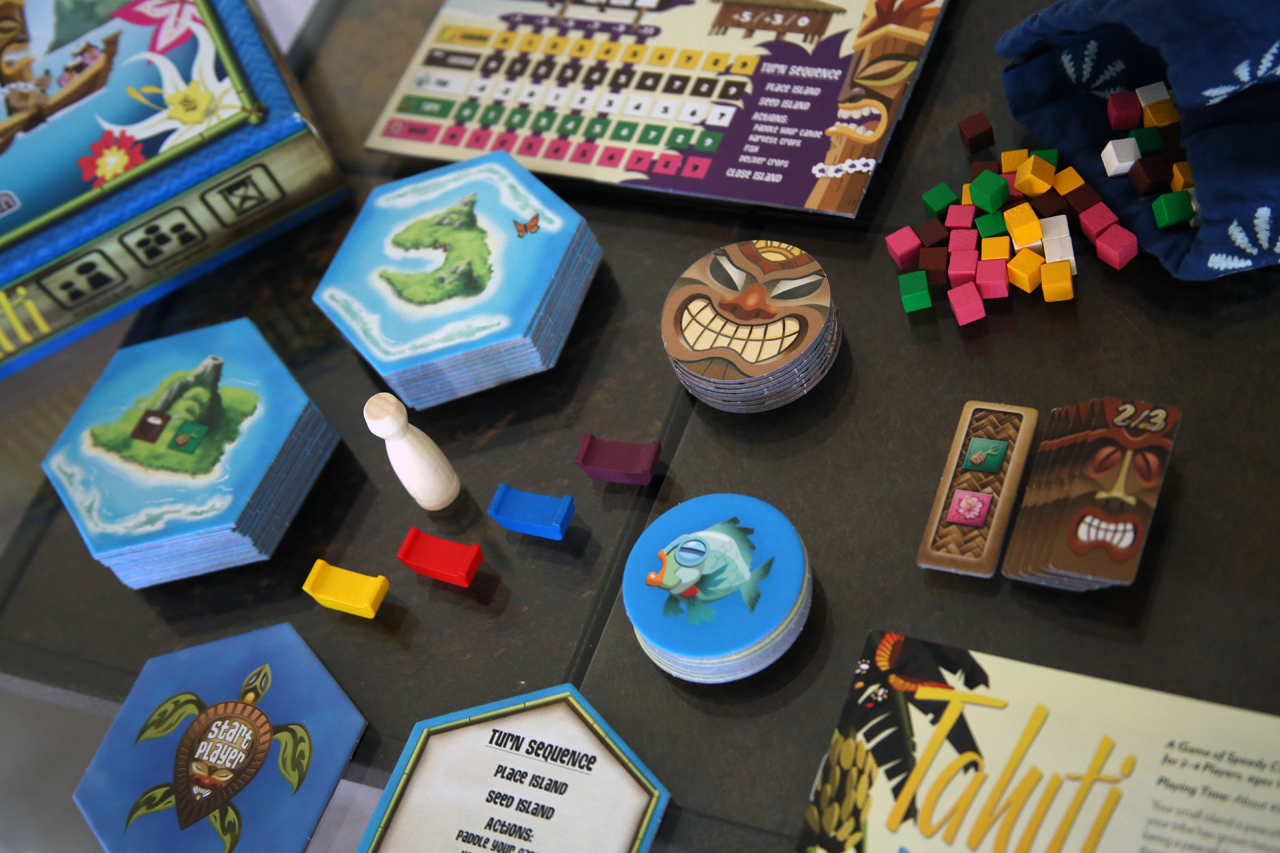 After a highly successful kickstarter campaign, Tahiti was published in June of 2012 by Minion Games. The design quality for this game is top notch. The game comes with a ton of wooden cubes, which represent the crops and fish. It also contains wooden boats and a wood pawn to represent the goddess. The game’s hexagonal tiles are made of sturdy cardboard which allows easy building of the game board. The scorecards are also individualized by player/boat color and have information printed on them for point values and turn sequence steps. The artwork on the tiles is excellent and does a great job of promoting the island theme. The game also includes a high quality drawstring bag that is essential to the game play (see below) and has a very nice design pattern, further linking the theme and the design. The instruction manual is about 4 pages and contains illustrated examples of your movements and actions. 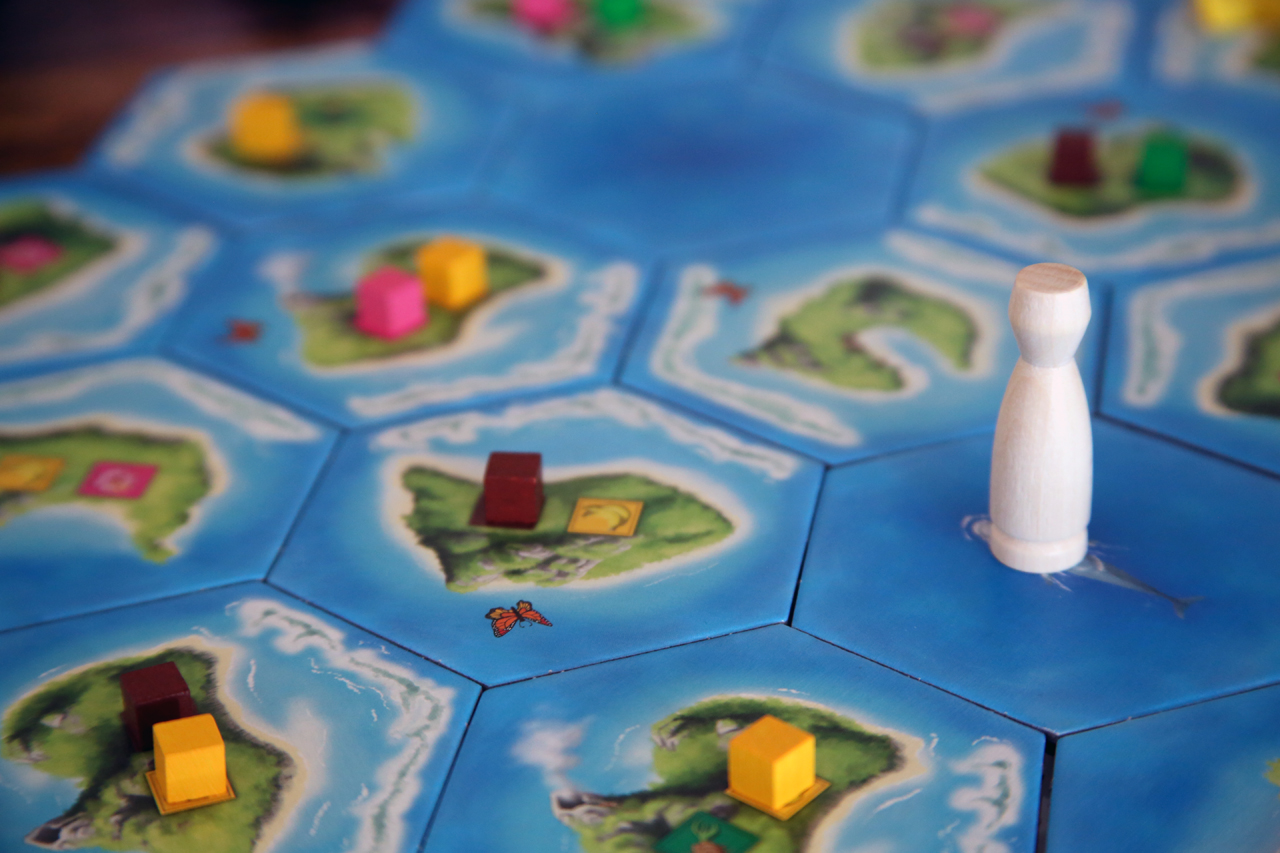 Players start off by choosing their colored boat and corresponding score card (except red…I am red…I called it first) and placing them on the home island. Starting island configuration is then set up and the “favorite foods” cards are distributed. These secret cards dictate which food-types your  tribesmen value most, which will affect your end of game scoring. If a player is successful in collecting the most of any of the items on their cards, they will score bonus points at the end of the game. But, be careful not to put all your bananas (there are no eggs) in one boat (no baskets, either) or you will end up losing points! You are rewarded for collecting a variety of goods.

On a player’s turn there are a few phases. The first phase is to move the Haumea goddess token to a tile with an open edge, then place a tile down adjacent to the goddess. This is the way in which you discover more islands containing goods locations. The player also has the option of placing the tile in any orientation they wish. Each island tile contains reefs. Depending on how you place the tile, a player can cause islands to become more risky to travel between. The second phase is to populate any empty goods areas. Each tile contains one or more square goods spaces corresponding to a single type of good. During phase two, when an empty goods space is on the board, the player reaches into the nifty little drawstring bag and randomly pulls out 3 cubes. If any of the colored cubes you pull out match the empty space(s), the player places it on those islands. Any pieces that do not match go back into the bag. The third phase is to move the boat. Depending on how full a player’s boat is determines how many moves can be made. Each good that you carry in your boat subtracts one move from your total. The maximum number of moves is 4 (for an empty boat), with a minimum of one move (for those who prefer to hoard the bananas). The more a player fills up their boat, the less moves that can be made. 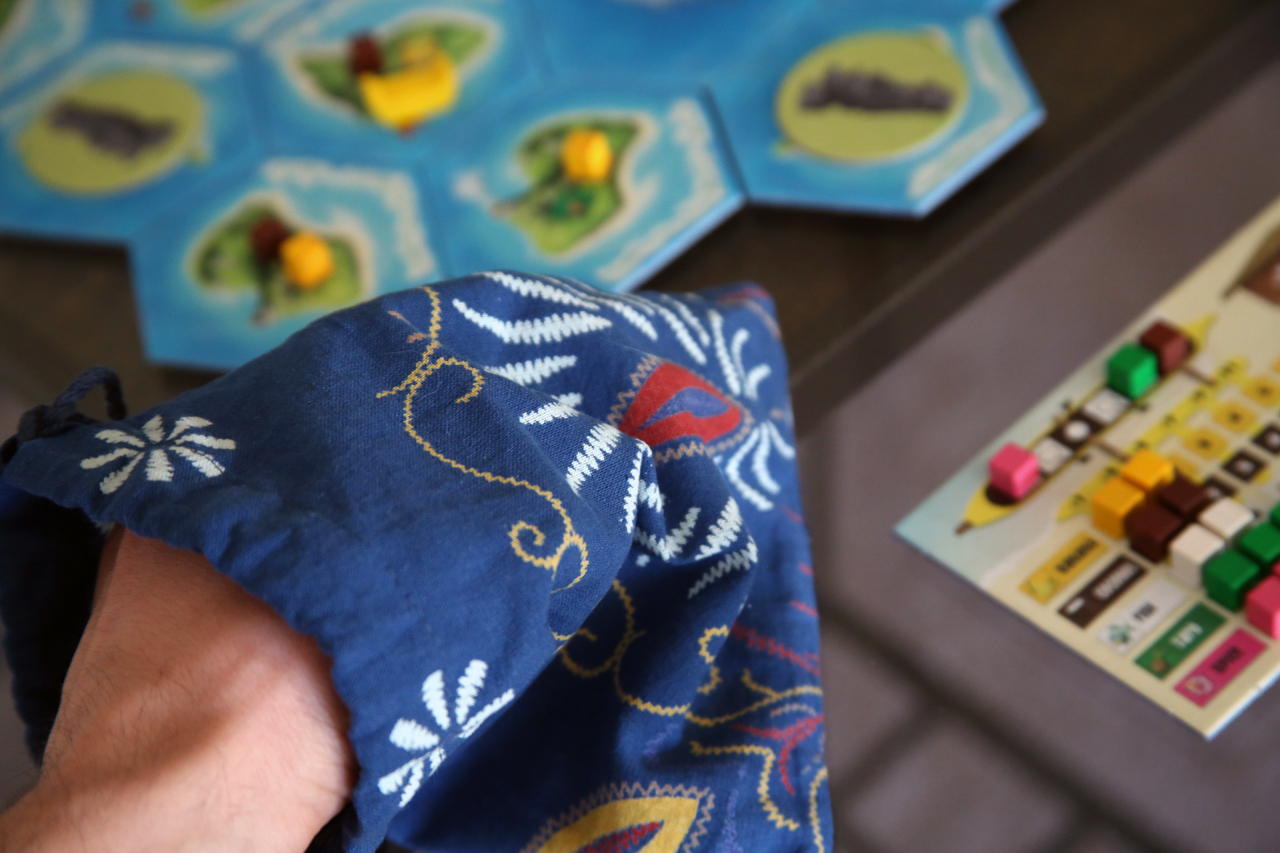 One tricky aspect of traveling around Tahiti is the overwhelming number of coral reefs sticking up above the surface. If a player happens to move to an island, but has to cross a reef to reach that space, then there is a chance that their canoe will capsize, sending one of their goods into the drink. To determine if a player successfully crosses a reef, the player pulls a cube randomly from the bag (pull 2 cubes if crossing a double reef) and if it matches the color of a cube in their boat, then it is lost and goes back in the bag. If it does not match, that player has successfully made it past the reef.

When a player successfully reaches an island, they can spend a move to gather goods from the land. A player can stock their boat with goods following one of two patterns: (a) the player can have one of each type of good in their boat or (b) the player can have several of a single type of good in their boat. This mechanic stops players from hoarding all of their favorite foods and not sharing with others! As mentioned earlier, extra points are awarded for collecting a variety of goods. When a player wants to gather goods they place them in their boat on the scorecard (see photo below). Once the boat is filled to their preference (it’s not always best to fill up your whole boat. Getting stuck at sea with one move per turn is rough…), the player will want to head back to the home island where they can unload all of their cubes with a move. 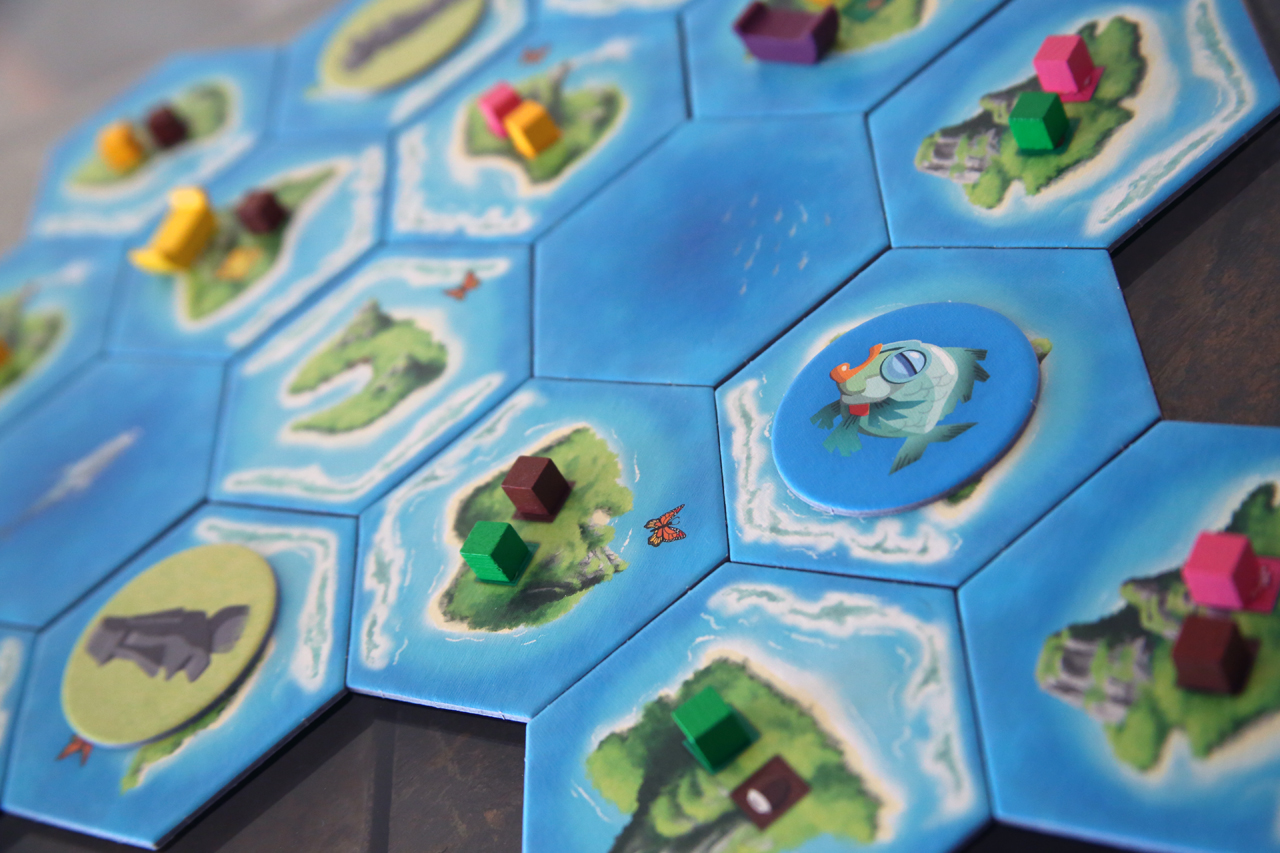 An aside: Fish are one of the goods, but they are not found amongst the lush island plants. To find fish in the game, the player must go fishing on the island coasts. This is done by reaching, again, into the bag o’ cubes, hoping to produce a white cube. If a player succeeds in retrieving a white cube – Hook, Line ‘n Sinker – add your new fishy friend to your collection.

Eventually, the season will end and the goddess will leave the game. The islands will gradually become depleted and once there are no more cube-bearing trees on the islands, the game will end. Players will tally up their points; scoring is based on the total quantity of each good-type they gathered throughout the game. “Favorite foods” cards are then revealed and bonus points are awarded. The tribesman (or tribeslady) with the most points is the winner and the Hero of Tahiti!

This is my first experience playing a game that is categorized as a “euro-style pickup and delivery” game. I picked this game up on a whim after seeing it in the store and liking the description and art style. On the first play through, we found ourselves getting stuck on a few elements of the turn phase which had to do with how many moves you get after picking up goods and losing rowers. I also noticed that the turn phase wording on the scorecard was completely different from what is written in the manual which caused some confusion initially. We did figure the mechanics out after about 2 turns and had no issues afterwards.

There is a little bit of strategy involved in this game. It usually comes down to deciding between available pieces to place and in what orientation, since this can effect the arrangement of the reefs. I found myself more worried about making it easier on myself and placing the tiles in a way that made it easy to travel to. On the second play-through I tried to make it harder for the other players when I placed a tile by trying to make areas with double reefs. You also can start to figure near the games end who has what favorite food. This will clue you in on where to place your depletion tokens first. The most fun is had when you are pulling cubes from the bag when fishing or trying to get through reefs. This is a nice, fresh way to determine what happens without having to use the typical dice method. I also enjoy the fact that the board will always be different each time you play it. This game works very well as a 2 player game and takes about 45 minutes to complete. I also played it with 4 players and seemed to take about 30 minutes since the island game pieces seemed to get placed much quicker. This is a great family game and a great warm up game for your next game night.