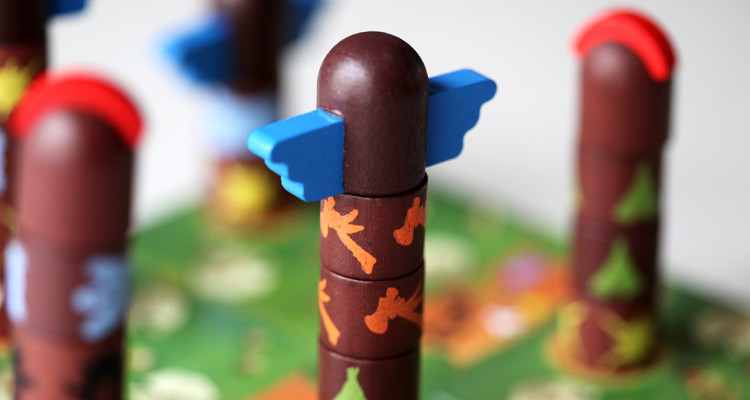 The ancient custom of totem building is reborn every 100 moons, when tribes come from all over to display their craft in competition. Build well and the pride of your village will stand above the rest for years to come!

Wakanda, from designer Charles Chevallier, is a set collection game for two players. Each turn you will draw a single wooden totem piece from a bag and choose whether to add it to a totem location, or claim a built totem as your own. Each totem location will score points based on a particular symbol requirement. Once all six totem locations have been claimed, the game is over and the person with the most points wins.

As you may expect from a game that can be completely explained in a few short sentences, Wakanda is not an overly complex or deeply strategic game. Choices are strictly tactical, stemming completely from the totem pieces you draw each turn and how your opponent will likely react to their placement. In many ways, Wakanda feels like a push-your-luck game, in that you often will place a piece with the hope that maybe…just maybe…the totem you played on will remain uncaptured until your next turn. This, however, is not likely. Wakanda is about sacrifices and opportunity cost; you will regularly hand your opponent a profitable scoring opportunity at the chance of taking another. While this typically falls on both opponents to deal with, there can be times where one player picks up momentum and forces their opponent into no-win situations repeatedly. That’s not necessarily a bad thing, but it can sour the experience for those on the receiving end. 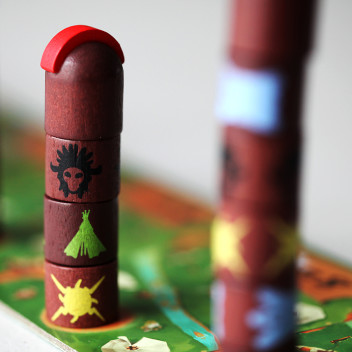 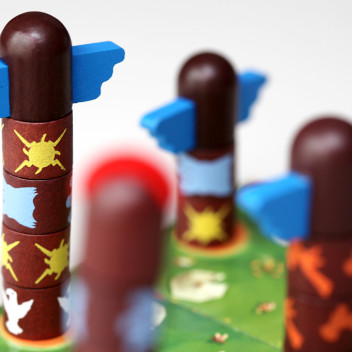 Wakanda is without a doubt another quality production from Blue Orange Games. They are, in my mind, a staple when it comes to well-produced, family-style games; and from that perspective, Wakanda is a hit. It teaches and plays in under 20 minutes, provides engaging tactical decisions for most of that length, and does so with flourish. But the other side of the…totem?…is that Wakanda can start to feel played out. The tactics are always there, but they can feel indistinguishable game-to-game, meaning that the overall staying power of Wakanda might not be a strong as some other games on your shelf. With the rise of the filler game, Wakanda finds itself sitting middle of the pack in a flooded sub-genre of games.

Sadly, after repeated plays, Wakanda generally only hits the table when it’s being taught to someone new. This helps the game feel fresh and fun again. With the same opponent(s), the gameplay begins to lose some of its luster and gravitates toward being another middle-of-the-road filler game. Enjoyable and great to look at, but lacking a particular flare in terms of gameplay.

This game is intriguing. I thought I was making all the right choices – grabbing what seemed to be big scoring totems – until the end of the game. The points I thought was scoring paled in comparison to the points that were scored against me. I look forward to more plays of this game so that I can try to work out the delicate balance between snagging totems for points, opening up other ones and waiting to get some of those late game points for myself. Delayed gratification is not something I necessarily excel in. The added randomness from drawing the pieces only makes this game tougher. Wakanda is both a quick two-player game and a nice little game to try your luck, and sometimes patience.

While initially intrigued and excited by the chunky totem components, the excitement quickly wore off as the game progressed. Wakanda left me feeling like I had no control over the very small amount of strategy present. After just a few plays, I realized I simply wasn’t having fun. Admittedly, there were games that I was on the receiving end of, what Buns described as, consecutive “no-win situations.” But, there were also games where I won. The problem is I can’t tell you how. I’m not entirely sure what I was expecting from the game, but it lacked any sort of “wow” factor and each press-your-luck moment seemed to be a crapshoot.