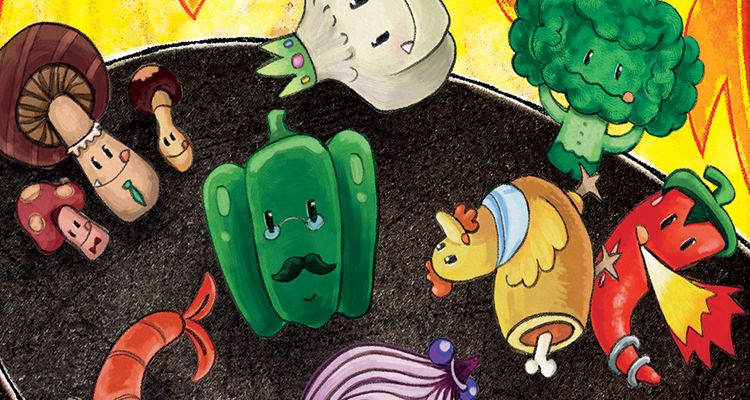 Wok on Fire, from designer Poki Chen and Green Couch Games, is a dexterous set collection card game that pits 2-4 players against each other in a culinary competition to create the best stir fry dishes. With nothing but your trusty spatula, you must flip and pick the wok in search of the perfect ingredients to become the next great Wok-Star!

A turn in Wok on Fire consists of 3 steps that must be carried out in order: Stir-fry, Pick and Supply. When stir-frying, you take your spatula card, slide it under the ingredient card(s) of your choice, and flip them up in the air as if you were a Teppanyaki chef. Repeat this twice, or until you have managed to flip over at least one ingredient card. Next, you will pick two face-up ingredients from the wok to place in your tableau. A number of ingredients also have actions associated with them that you must perform. For example, you must select an available green pepper first, or if you choose to pick up a garlic you must also take an additional stir-fry action and give an ingredient to an opponent of your choice.

Finally, if there are still cards remaining in the supply pile, you will draw two new cards, place them in your palm and ‘chop’ them facedown into the wok for the next player’s turn. The game will continue in this manner until the supply deck runs out of cards, thus triggering the end of the game. At this point, each player has one last turn to collect ingredients from the wok before heading into final scoring. 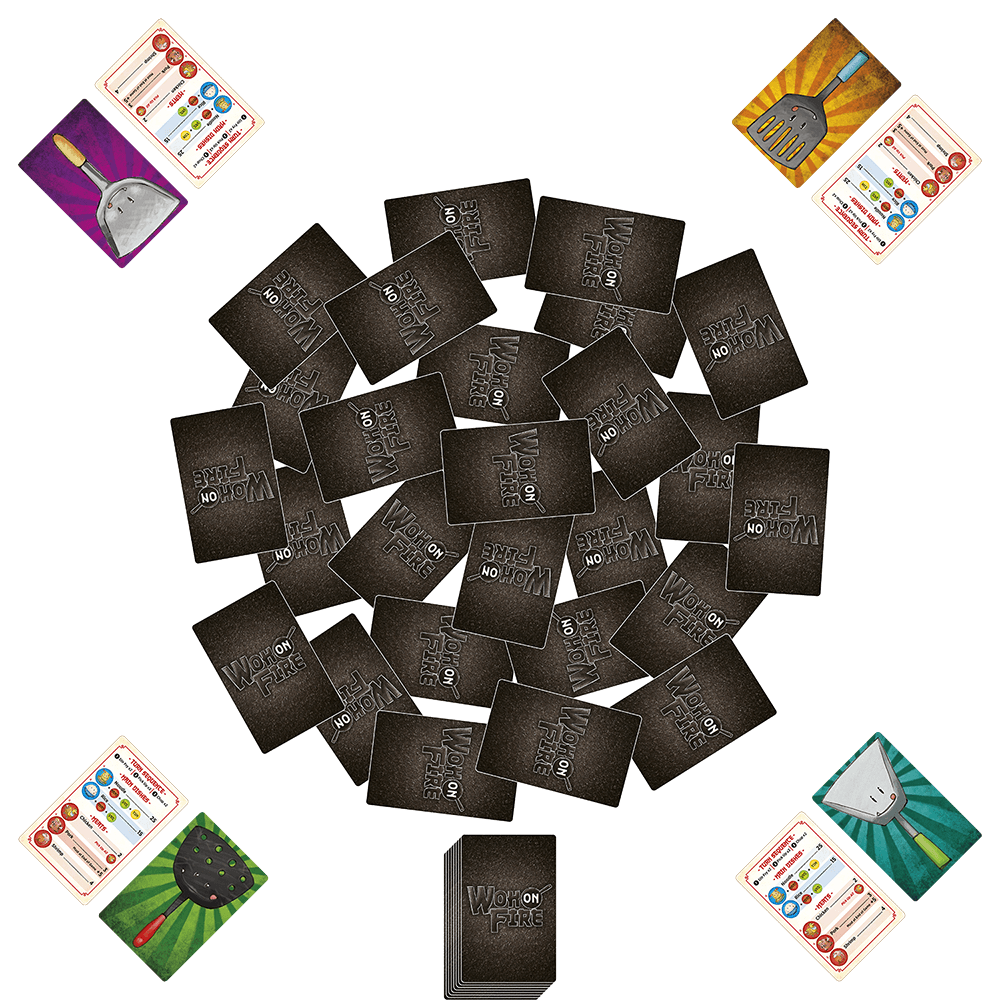 The Heat is On!

When final scoring is announced, it’s time to review the ingredients you’ve collected and combine them in the most palate-pleasing manner. There are 11 ingredients in all, broken down into four categories: meats, condiments, vegetables and starches. These ingredients can be used in several different ways:

Each of the three meats can stand on their own or in combination with other ingredients, with Chicken being the most common and least valuable, while Shrimp are rarer and highly prized. In the middle, Pork provides an additional bonus for the player who has collected the most.

The two condiments are worth nothing by themselves (who wants to chow down on just a ball of wasabi?), but skillfully applied Garlic amplifies the impact of a single meat, while the spicy Chili takes away the bitter taste of a green pepper.

Vegetables are always the star of a stir-fry, and Wok-on-Fire provides four classic ingredients for you to collect. Mushrooms are like the Three Musketeers, no good when there’s only two about, and if you get a forth, it’ll just get into fights with your other ingredients. Broccoli excels by itself, but woe betide the chef that overuses this simple vegetable. On the other hand, moderation is not the key with Onions; a skilled cook should keep them all for himself! Last, and perhaps arguably least, the Green Pepper will actively hurt your score unless properly paired with the Chili above.

Now that we’ve whet your appetites, it’s time to put together a full on meal using one of the two starches that are available. Again, like the condiments, neither will stand on their own, but will take a place of honor when properly combined with certain ingredients. Paired with meat and a vegetable, a meal prepared with Rice will provide a filling score to your total, while Noodles require an additional condiment to take top billing!

Ingredient cards may only be used in scoring combinations once, so it’s up to you to determine how best to utilize them. That garlic you picked up would work well with your shrimp, but by adding it to your rice bowl you could complete a tastier meal! Once the points have been tallied, the player with the highest total is crowned the Iron Chef!

Will it Wok Your World?

The cute artwork from Adam McIver gives each ingredient its own personality and individual flavor (literally), and while the variation in cards and tactics is welcome, the eleven ingredient abilities and scoring can be a bit cumbersome on your first few plays. Even though many of the combinations are thematically intuitive, there is a definite learning curve for new players and a few games are required before you no longer have to refer to the player aids for assistance.

I am a huge fan of dexterity games and the spatula flipping adds a fun inclusion of theme and agility to your turn. Depending on the size of your wok, the number of ingredients available to flip and choose from will vary; in a larger wok the cards will naturally spread out, whilst in a smaller playing area each flip could affect multiple cards. Regardless of the wok’s size, one thing remains constant and that is the laughs that it provides as your friends struggle to flip cards over and over.

Keeping in line with Green Couch Games’ mantra, Wok on Fire is a quick, light-hearted game that will be enjoyed by families and casual gamers alike. The varied abilities and scoring methods used for each ingredient are perfect for fans of games such as Sushi Go! who are looking to add that “next step” to their collection. I suggest you wok on over to the Kickstarter and check it out for yourself! 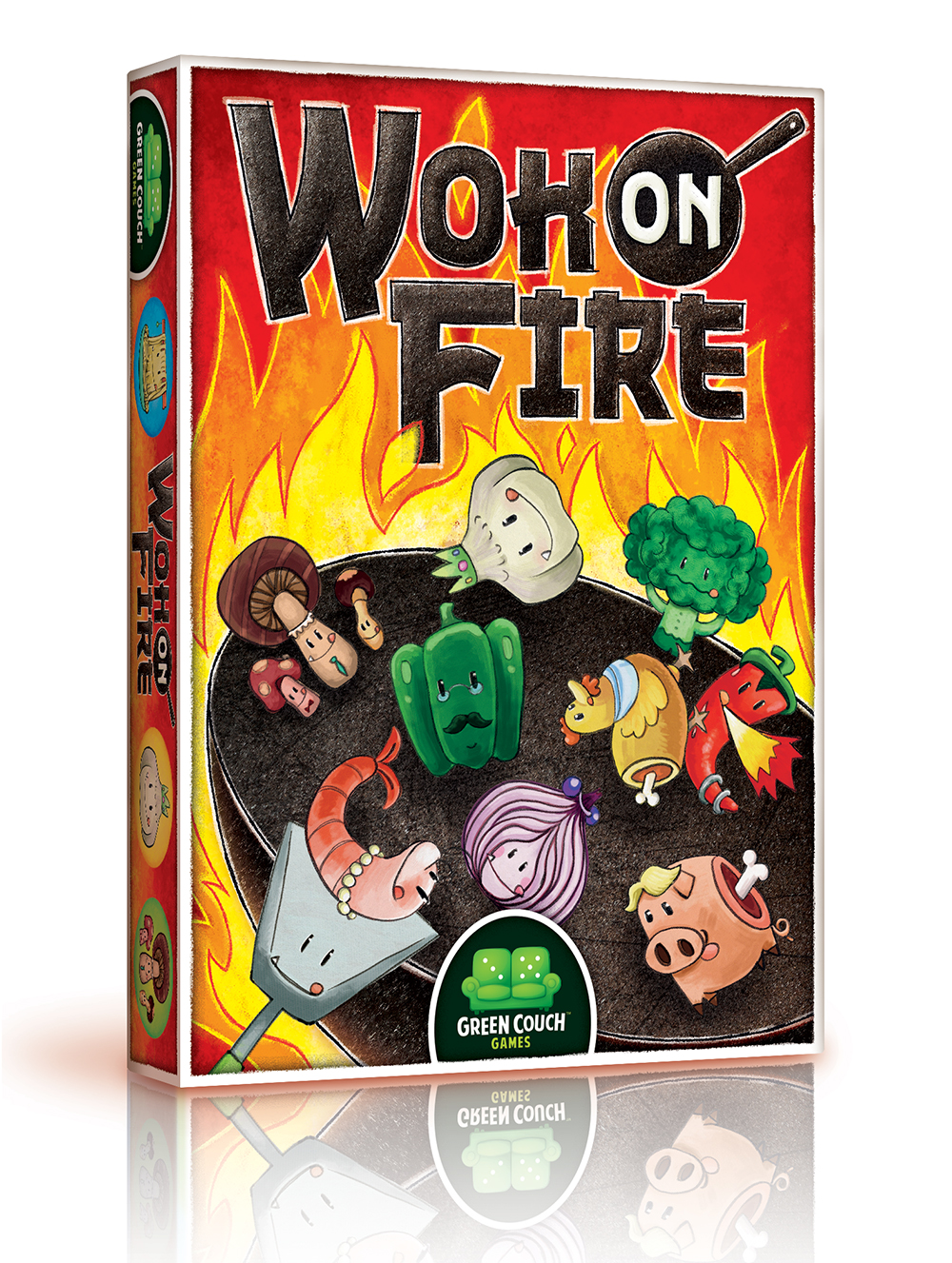 Immediately upon taking out the Wok on Fire cards, I was reminded of Sushi Go!, as the theme and set collection mechanic are both reminiscent of each other. Where Wok on Fire deviates is in the dexterity involved in flipping the ingredients you can collect as opposed to card drafting. Personally, I found the dexterity mechanic to be quite cumbersome.  Using a card to flip other cards was often easier said than done, and the fact that there’s no way to gauge what other ingredient cards will come up on your opponents’ turns eliminates strategic maneuvering that other card gathering mechanics, such as drafting, allow. In addition to hoping that you flip over the cards you need, much of the endgame becomes a matter of rearranging your cards to calculate your best combination of recipes for maximum points. The scoring is further complicated by the fact that even though a card is only scored for its points once when calculating total scores, the pork and broccoli cards that are used in recipes (thus making them not count individually toward a score) still count when determining who has the most.

While the convoluted scoring is not necessarily bad in itself, it could potentially eliminate players who just can’t be bothered with a math lesson when they’re trying to play a game. Overall, I found Wok on Fire to be rather underwhelming and not much more than a novelty. It indeed had a hilarity element in trying to flip cards, but that wore off quickly. I feel that there’s a potential market for this game in newer gamers, but it doesn’t compare to the list of filler games I already enjoy and would rather play.

Wok on Fire is a funny thing to review. My instinct is to draw comparisons to other games; titles like Flowerfall and Maximum Throwdown – which incorporate a spatial card element – and Fairy Tale and Sushi Go! – which use drafting and set collection to move you toward victory. Wok falls somewhere between all of these, using the dexterous “stir-fry” action to semi-randomly generate your drafting options on turn-to-turn basis. While novel, after several plays I found Wok to be a largely solitary experience where I worked to optimize an end game math problem. Underneath the adorable exterior is essentially a choice between randomly dealt cards each turn. While none of this is inherently problematic, it leaves me underwhelmed. These feelings run parallel to my question of who exactly this game is for. While the gameplay feels light and family friendly, the variety of scoring options bog the final turns and push the calculations beyond parents and their young kiddos. A “gamer’s filler” seems to be the best fit, but my shelves sure are full of those…

First Impression: I agree mostly with my league-mates on their opinions of Wok on Fire, but I really had a lot of fun playing it. I was, of course, the worst ingredient flipper but that is really what made it fun for me. Wok on Fire could easily be a huge hit on family game night or as an intro to more casual gamers. The dexterity mechanic sets the game apart from your typical pick-and-pass drafting game. The scoring portion is definitely the most confusing part and may cause some to not be open to playing again. After a few plays and understanding how the ingredients mix together, the scoring can start to become a less daunting task. Adding an additional scoring variant as an intro to the game could (and should) be added since it’s essentially a set collection game. If you have a more casual gaming group or younger kids, Wok on Fire could easily see repeated plays. How long the novelty will last is to be seen.

Wok of Fire is currently funding over on Kickstarter. Head on over to the campaign page to purchase your own copy. 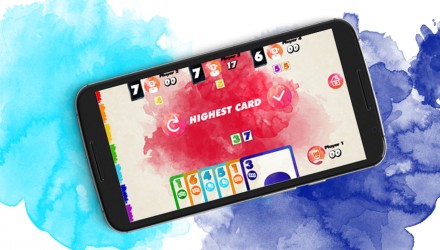