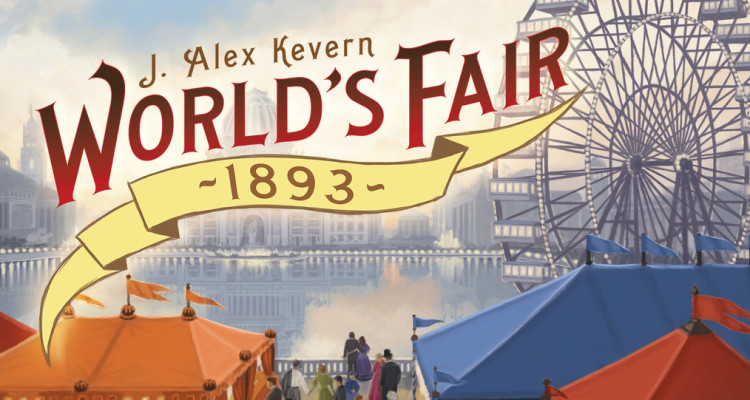 World’s Fair 1893, the newest offering from designer J. Alex Kevern and Foxtrot Games – publishers of the MENSA Select Winner Lanterns: The Harvest Festival – is a light area-control game set against the backdrop of Chicago’s World’s Fair, circa 1893. It will be your job, as one of the curators for this festival of creation, to showcase the best and brightest that science, technology, entertainment and culture have to offer.

World’s Fair 1893 takes place across three scoring rounds, each lasting a variable number of turns, during which you will have the opportunity to influence prominent figures and vet the eligibility of potential exhibits to be featured at the fair. You’ll do this each turn by placing one of your supporters in a single section of the fair and collecting the accumulated rewards of that space. While it sounds simple, the weight of this single placement is dictated by how the cards, the space being placed on, and the timing of the scoring round all line up.

Specifically, you’ll be evaluating the availability of three different card types found in the game, which each hold weight for a specific type of scoring.

When you place a supporter in an area of the fair, you immediately obtain the corresponding cards which have been randomly distributed to that specific location. You also must utilize any influential figures acquired on your previous turn, so you may need to base your placement around their abilities, as well! Once 11 Midway Tickets have been collectively gathered during a round, the game will immediately pause and a scoring phase will occur. You will earn points toward your total reputation for each Midway Ticket collected (and a 2-point bonus for having the most) and for each of the five areas in which you have the most, or the second most supporters. Winning these majorities will also allow you to approve a certain number of exhibit cards of the matching color/area that you have previously collected. Once approved, these cards are traded in for exhibit tokens which are then scored as sets at the end of the game.

Once scoring is complete, play will proceed to the next round and continue in this fashion for a total of three rounds, at which point the final reputation scores will be determined. You’ll combine your points from Midway Tickets, area majorities and exhibit sets (1/2/3/4/5 different exhibits awards 1/3/6/10/15 points); the player with the highest total is the most renowned contributor to Chicago’s World’s Fair!

Upon first playing World’s Fair 1893, I found myself looking for more. The game is, in many ways, a simple area-control game with some set collection included. I longed for more meaningful decisions, hoping to have more options on my turn than just placing a supporter and grabbing some cards. Many plays later, I’m happy to admit that I underestimated what World’s Fair 1893 really is as a design.

Looking objectively at its successes, this title consolidates what many games look to achieve into a much smaller and balanced package. Games of World’s Fair take roughly 45 minutes, with more experienced players being able to knock out two full games in an hour; yet, even in such a short span, you’ll have the opportunity to fully indulge in the jostling and board manipulation that makes area-control such an interesting genre. The simple and diverse scoring opportunities also make each game a little bit different, as you work to maximize your output amongst the plans of your opponents and a randomly evolving board state. Most unique in the gameplay design is the pacing of the game and how area-majorities interact with the set collection. Having the ability to speed up or draw out the round – and how either option impacts your own and your opponent’s performance – is fun and engaging; it makes the Midway cards a powerful tool, though with the downside of generally being worth fewer potential points. The ability to approve different exhibits based on your area-majority during scoring is also clever because it introduces the potential to strategically choose second place victories at times, in favor of other options.

More subjectively, I’ve come to appreciate the blend of theme and mechanism found in World’s Fair 1893, primarily because I find the easy-going gameplay to fit nicely with the classic American backdrop of the real-world’s Fair. True to its theme, the game favors sleek and appealing form as opposed to a flashier, brighter or more fanciable punch. Much as the Chicago World’s Fair was a celebration of our advances and successes, World’s Fair 1893 provides a mellow, enjoyable experience that helps me celebrate the joy of playing games rather than trying to melt my brain or cruelly smashing my opponent’s dreams. 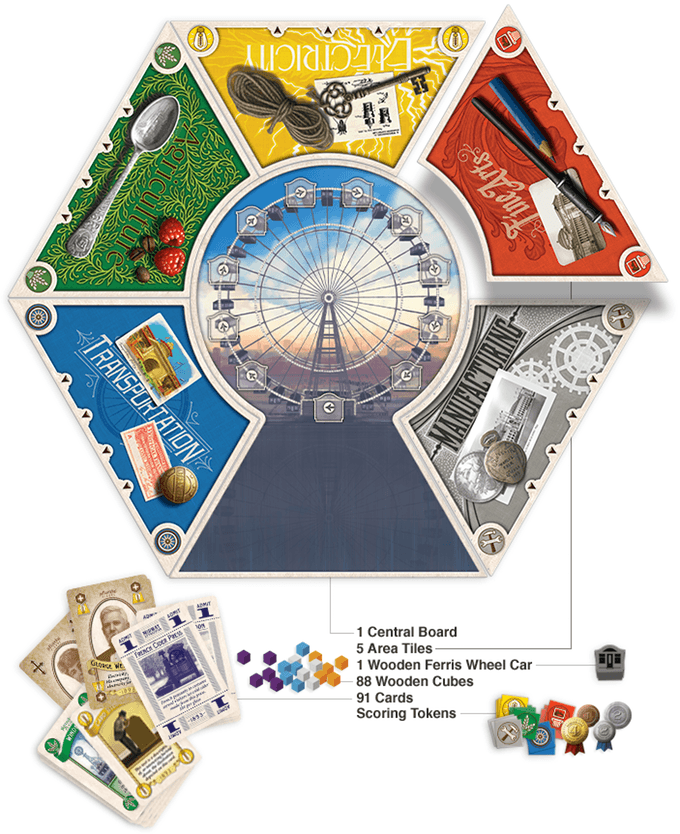 As with any balanced perspective, time must be given to the potential pitfalls of World’s Fair. The specific concern that has nagged across plays is the randomness of the card distribution. Specifically, the potential for a concentration of influential figure cards in one area. The ability to place additional supporters is important and seeing two influential figures in one area is typically enough to dictate your placement for the turn. If three happen to end up clustered, as we have seen on occasion, there is almost no reason to consider any other play for your turn.

Outside of the relative strength of the influential figure cards, the game is pleasantly balanced across player counts and even in games where someone happened across a glut of extra supporters, we have had consistently close final scores. Nor can we fail to mention that the whole package is set off with some wonderful artwork, including a surprising amount of unique and era-appropriate art assets across the different card types.

All in all, the biggest boon for any game, including World’s Fair 1893, is the fact that the experience has proven enjoyable and appealing across a range of skill levels. Our group ranges from casual party gamers to lovers of dry-and-soulless euros; we have yet to come across a player who hasn’t enjoyed their time with this design. It’s even been requested on several occasions by my mom, who can’t remember the name of the game (“Did you bring the ferris wheel game?!”). If you’re in the market for a game that has a nice sense of identity and makes the area-control mechanism more user-friendly, which it often isn’t, then I’m happy to point you in the direction of World’s Fair 1893 for consideration.

Immediately upon seeing the ferris wheel shaped board, World’s Fair 1893 grabbed me: the design is bright, clean and organized. The board is user-friendly and I’ve gotta say that I really enjoy advancing the game tracker around the ferris wheel by raking in Midway Tickets. I think what I like most about it is that the control of a specific area on the board changes from turn to turn based on so many things. Sure, there might be some fighting over a specific area in order for players to gain additional endorsement opportunities, but the lure of certain Influential Figure card or Midway Tickets can easily sway your decision. It makes the game a little less ‘take-that’ kind of competitive, which I think makes it more fun. Plus, everyone falls prey to the same randomness of card draw and the need to sometimes place a supporter in the wrong area just to get the cards you want. On the other hand, the Midway Tickets are also great because they can help you secure your lead in an area by making the round end more quickly, allowing you to still stick it to your opponents by drawing the current round to a close before they get what they need as opposed to just taking over an area of which they have control. World’s Fair 1893 is themed such that it is a cohesive and thoughtful game, but also so that it will be a timeless addition to your collection. There are no zombies, or aliens, or popular TV tie-ins (which are all things that I love, mind you), but I think that only serves to increase its longevity of play: the theme will always be relevant as a reflection of an innovative and proud time in American history.

I honestly do not have much to add outside of what has already been mentioned in this preview. True to Foxtrot’s previous titles, World’s Fair offers players a masterclass in mechanical simplicity and production quality; rewarding gamers of all types with a satisfying and accessible area control experience in an abbreviated timeframe. This is one ferris wheel I think you should take a ride on.

The League of Nonsensical Gamers would like to thank Foxtrot Games for kindly providing us with a prototype of World’s Fair 1893 for this preview.

World’s Fair 1893 is currently funding over on Kickstarter. Grab your ticket to the Midway attractions and head on over to the campaign page by Oct. 28, 2015 to purchase your own copy. For $29 you will receive a full copy of the game.