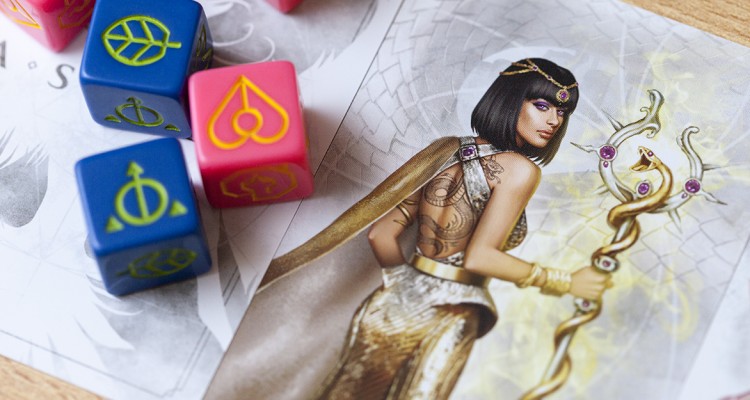 In 1993, Wizards of the Coast turned the world of hobby gaming on its head, releasing the first set of Magic: The Gathering, a dueling card game about magic-users fighting to the death with fantastical spells and mythical creatures at their command. Some twenty years later, the reign of this game stands strong – it truly is the King of Collectible Card Games. While many have entered the arena with the goal of overthrowing this titan, Magic’s ability to stand strong has proven that attempting to create a sustainable competitor in the collectible game market is somewhat futile. Fortunately, many savvy designers and publishers have worked around this model, specifically targeting the one undeniable weakness of games like Magic and its ilk – the cost to stay relevant.

We sit now in the era of anti-collectible card games, games that look to eliminate the need to chase rarities and spend top dollar to play the game well or in a preferred style. While it is just one of many “expandable card games” to be featured on store shelves, the newest contender, Ashes: Rise of the Phoenixborn from Plaid Hat Games and designer Isaac Vega, is seeking its own place at the table, blending the non-collectible distribution model of popular games like Android: Netrunner and Doomtown Reloaded with the blended fantasy card dueling of its mentor, Magic: The Gathering.

Wait, haven’t I seen you before?

Many a gamer could see reason to roll his or her eyes at another game simulating a duel between magic wielding sorcerers. It is a fiction that has been imagined a thousand times before and its frequency in card game design rivals that of zombies in other genres. Still, Ashes has taken this in stride, developing an original universe centered around the land of Argaia and its humanity-saving Phoenixborn, powerful wizard-warriors sent by a higher power to destroy the chimera, an evil of one sort or another. 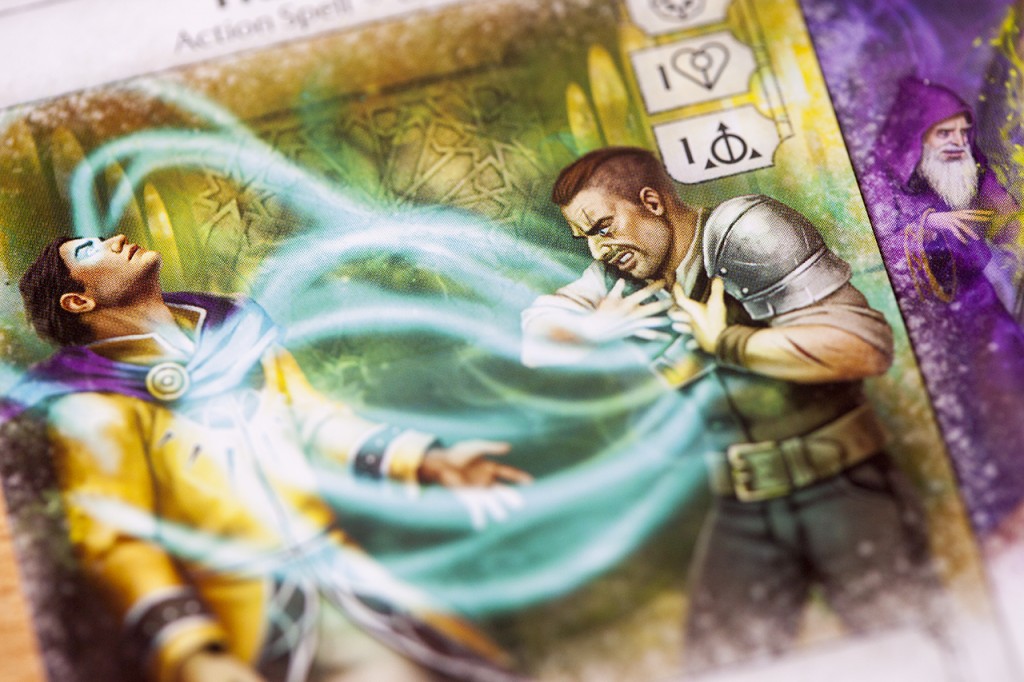 As an Ashes player, you take control of a Phoenixborn driven mad with a lust for power, seeking only to destroy the others like yourself in hopes of collecting their ashes (get it?) and becoming all-powerful. This is played out in a fight to the death, typically 1-on-1, although multiplayer is available. Each character has a unique collection of conjurations, units, spells, and power dice at their disposal. The game provides the option to work within the confines of the 6 pre-built “starter” decks right out of the box, or to mix-and-match with simple, but meaningful deck construction rules.

Duels take place over several rounds, each consisting of a variable number of player turns. Players alternate taking a single Main Action and an optional Side Action until both have consecutively passed, at which point the round resets and things start again from the top, repeating this process until one of the Phoenixborn falls.

The basic gameplay of Ashes is not terribly new to your average card game player. Much like the game’s namesake, Ashes initially looks more like a rebirth of older titles than something completely new. Your action options generally consist of playing creatures and allies, initiating attacks, and surprising and manipulating your opponent with instant spells. Looking closer though, you will quickly see that this is in fact a new animal, one that has learned from its past lives.

Sitting down to play your first game of Ashes, you’ll be confronted with the First Five system, an innovation on the often frustrating mulligan draw rules found in just about every other competitive card game on the market. Officially gone are the days of building redundancy into decks to maximize the potential of your starting hand. Designer Isaac Vega says “No” to this and instead, very kindly, tells you to pick whatever you want. The first time you experience this it makes so much sense, you’ll immediately become infuriated with all of the other games that forced you to pray to the Randomness Gods before each opening draw.

With 5 perfect cards in your hand and a smile on your face, you’ll reach for the 10 custom-etched dice from your particular Phoenixborn’s school(s) of magic. No longer do you have to fish through your deck for mana, credits, money, energy or whatever else might power your tools of destruction. Instead, the dice, with their three different faces indicating degrees of magical strength, will be rolled at the top of each round and then utilized to cast spells and summon allies. This twist emphasizes how your job as a Phoenixborn is not to waste time searching for something to fuel your awesome spells, but rather to focus on and optimize the strategic and tactical options available to you. And, yes, you’re completely correct, the dice don’t always roll in your favor, but the Meditate Side Action happens to be an always-available way to mitigate said randomness, allowing you to discard cards from your hand, deck or play area to manipulate their facing. 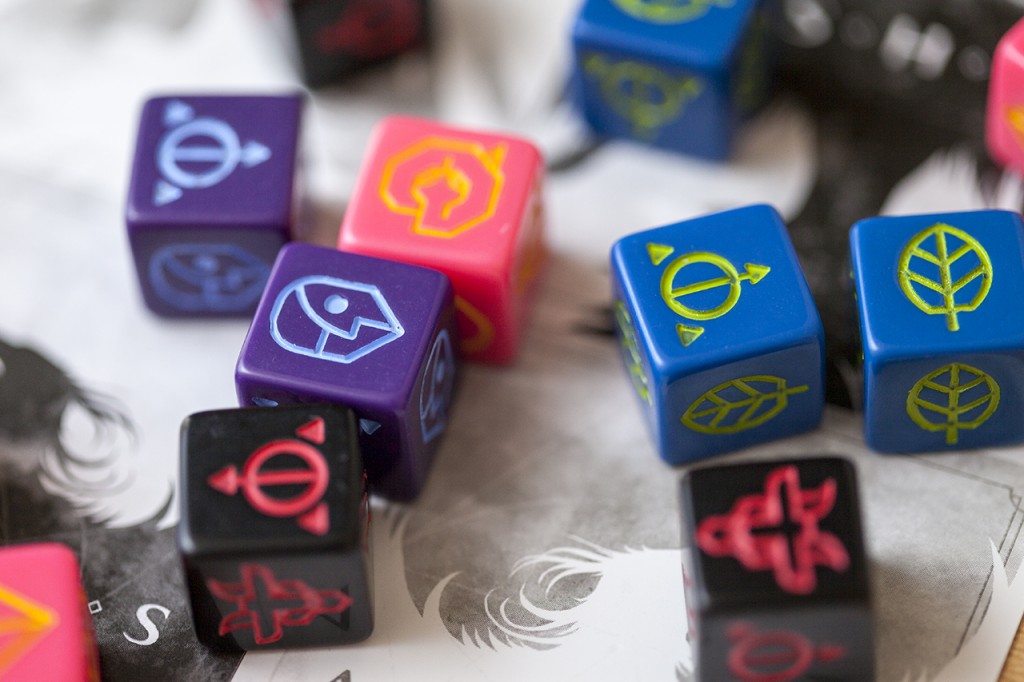 With this staging complete, the game then completely hinges on your ability to plan, react, and strike in the most effective way possible. The opening pace of Ashes is slow; you’ll have nothing on the board and will work diligently to develop a Spellboard and Battlefield full of options. Each Phoenixborn has a predetermined number of spells and allied units permitted on their side of the board at once, so it is important to consider and work within these limitations. The round-style structure of play makes the game less fluid and more piecemeal, forcing you to work with resources – your hand of cards and power dice – within the confines of the particular round. The game does not tend to balance itself with quick swings of fortune, and because of this, it is important to keep pace with your opponent; either by matching the size or strength of their play area, or by holding them back. Advantages can snowball if not dealt with swiftly.

One of the most difficult challenges found in Ashes: Rise of the Phoenixborn is how to properly focus on making good decisions in the midst of its production quality. Hobby game companies across the board have begun to recognize the power in quality components and art assets, but it is clear that Plaid Hat Games sought to set a standard for how a game should look, as well as play. The talent of Fernanda Suarez is on full display, with Phoenixborn cards featuring an extended-art side in addition to the standard ability text, and a spot-glossed box that showcases the vibrant world hidden inside. The aesthetic decisions made here are nothing short of a stunning blend of form and function.

With all of its success, Ashes does not exist within a vacuum; it competes with many juggernauts for the love and earnings of its potential fanbase. It bodes well as a non-collectible title, featuring a nice range of play options within a single core box. Enough dice, cards and tokens are provided to run multiple games at once and the inclusion of rules for deck construction and draft play help to elevate it as a cost-effective experience. Still, a slow expansion release schedule, although more manageable for most, means that those in search of the variety commonly provided by Fantasy Flight Games’ Living Card Games or the like will be left hanging until the first round of expansions are released. This also factors into the relative depth of the game compared to others on the market. Being in its infancy, it simply isn’t able to offer the depth of strategy and play found elsewhere; similarly, the options for competitive community play are equally slim, as publisher Plaid Hat Games has never ventured into the realm of competitive leagues and global tournament structures on a scale that can rival other popular titles.

Though the potential for massive growth is there, slowly building within the expanding Ashes fanbase, this early in the game’s development it sits best as a casual play experience to explore with your local game group and at your neighborhood FLGS. I wouldn’t be surprised if in a year’s time, Ashes has developed into a staple of Plaid Hat’s brand, but for now it proves to be a wildly innovative and absolutely beautiful title that needs grassroots support to compete with the big dogs. I happily look forward to exploring where this game heads, but will balance its play with other games within the collectible and non-collectible markets, rather than give it my exclusive attention. 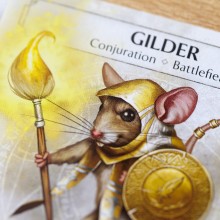 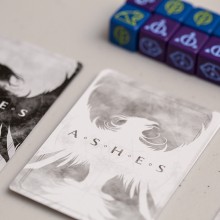 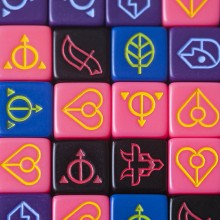 As a lover of card games, both collectible and non-, I found myself pleased with the ingenuity expressed through this title. In a market rich with variety and asymmetry, Isaac Vega and Plaid Hat Games have taken a route that doesn’t necessarily re-invent the dueling card game, but one that does bring it forward into a modern era. It looks to correct many of the problems inherent in the genre and shift the focus onto player ability and skill by largely removing, quite literally, the luck of the draw. Not even considering the stellar aesthetic value, the core box of Ashes: Rise of the Phoenixborn should be considered the new standard for how to design, develop, produce and distribute a competitive card game. It is a wonderful product that, despite a slightly shallower experience than some competitors, should be recognized and lauded for its ability to cater to a variety of groups, play styles, and gaming budgets.

Ashes is a game that Matt and I discovered early in its creation. I was instantly hooked by the cruel and mystical Jessa Na Ni and her blood puppets (go ahead, say “blood puppet” and don’t get excited). The characters in Ashes, and their gorgeous depictions, are immediately enticing. We have played many a duel-style card game and I tend to enjoy most of them, with the exception of the times that I’m losing (I’m a sore loser). Ashes is a hard game sometimes, made harder by the fact that sometimes you just have a really crappy roll. The decks are definitely not balanced: the game is not designed to be a fair fight. What happens, though, is you learn the strengths of each deck and you are able to tailor your Phoenixborn to your opponent’s abilities. You can stack a bunch of little conjurations against your opponent, or maybe just find one giant dude in your deck and let him handle everything. Every deck has options, despite the fact that they each have a distinct core strategy.

I really enjoy this game. I like that I can learn the decks without having to know each and every specific card in them and I like that I don’t have to build a deck and hope that I know what I’m doing. The starter decks are excellent and the game itself is easy enough to learn that I don’t feel a player is necessarily at a disadvantage having less experience. I truly look forward to more from Isaac Vega for this one.