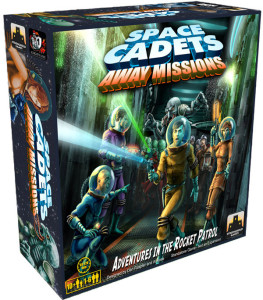 Mission: Take Away your Money

Space Cadets: Away Missions is a cooperative, scenario-based, tactical action game set in the Golden Age of science fiction, making it a thematic prequel to the first two Space Cadets games. In this game, players take on the roles of adventurous human spacemen (“Rocketeers”) who explore UFOs, acquire alien technology and fight hordes of hostile extraterrestrials.

Each turn, Rocketeers spend action points on activities such as firing atomic rifles, analyzing exotic equipment, or subduing the malicious Brain-in-a-Jar. When the Rocketeers are finished, the Aliens take their turns by following simple movement and combat protocols. Seven types of hostile Aliens threaten the Rocketeers, from the repulsive Mind Leeches to the rampaging titanic Sentinels.

Space Cadets: Away Missions has scenarios linked in a campaign story arc. These “Away Missions” are set at various locations, feature different combinations of Aliens, and have diverse objectives for the Rocketeers to achieve. Hexagonal map tiles are arranged to form the locations, such as flying saucers, rocket ships, and space stations. Cooperation, tactical planning and a bit of luck are essential if the Rocketeers are to overcome the relentless horde of little green men.

Space Cadets: Away Missions will be hitting Kickstarter shortly, with an estimated delivery date of August 2015 for backers. Also, for more details on the project you can listen to our interview with Stephen Buonocore, President of Stronghold Games, in episode 12 of The Podcast of Nonsensical Gamers! 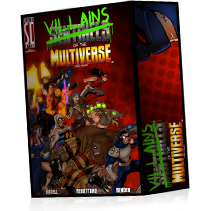 Hot off the success of their last pre-order, Greater Than Games announced three new Sentinels universe expansions that are available for pre-order on their site. First up is Villains of the Multiverse, an expansion to the wildly popular comic book co-op Sentinels of the Multiverse. This is to be followed by Sentinel Tactics: Battle for Broken City and For Profit, a standalone game and expansion, using the Sentinel Tactics miniatures system. From the publisher’s website:

All three of these new titles will be available for pre-order on Greater Than Games website until March 12, 2015 and delivered by the end of the year!

Rio Grande Games announced the 9th expansion (I didn’t think board games had the ability to age people until now) to the grandpa of all deck builders, Dominion: Adventures. According to the announcement this new installment will feature a ton of new cards (go figure):

This is the 9th addition to the game of Dominion. It has 400 cards, 6 mats, and 60 tokens. There are 30 new Kingdom cards, including the return of Duration cards that do things on future turns, plus Reserve cards that can be saved for the right moment. There are also 20 Event cards that give you something to buy besides cards, including tokens that modify cards.

No release date has been set, but if you’re still playing this game and enjoying it, then you will no doubt be keeping a keen eye on things (and don’t worry, we’ll let you know if we find anything out, too). 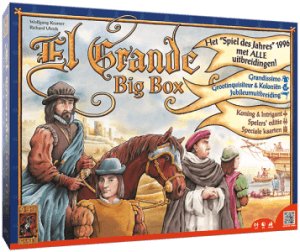 Dutch Publisher 999 Games has announced a long awaited reprint of the classic area control game, El Grande. As reported by Dice Tower News (because I can’t read freaky-deaky Dutch), this deluxe release will correspond with the 20th anniversary of the game’s initial launch and contain every expansion produced for the game. I have yet to try this game as it has been hard to come by in my neck of the woods, but I am eagerly awaiting the chance. No release date has been set, so stay tuned for more details.

Japan is the new Mediterranean

Z-Man Games has announced a reworking of Traders of Carthrage into Traders of Osaka, a small box game from designer Susumu Kawasaki. Using a mixture of set collection and hand management, merchant players must deliver the valuable cargo from Osaka to Edo whilst competing against both their opponents and the dangerous Black Tide. The game is scheduled for a summer 2015 release.