Villains’ Legacy Lost in the North Wind – News at 11

AEG’s legacy is surely not lost

Alderac Entertainment Group (AEG) has provided details on their North American release of Seiji Kanai and Hayato Kisaragi’s hit Japanese card game Lost Legacy. For those unfamiliar with the game, Lost Legacy is a deduction based card game for 2-4 players. 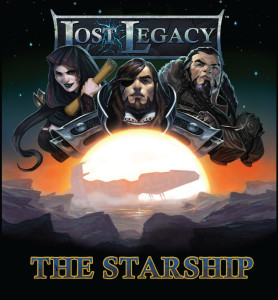 You start the game with one card in hand from a deck of sixteen cards. On a turn, you do the following:

Using the investigation speed indicated on the card each player has in hand, players take turns guessing which player (whether yourself or someone else) holds the “Lost Legacy” card; this card might also be in the “Ruins”, a location that holds one card at the start of the game and possibly acquires more cards during play. The player who guesses correctly wins; if no one finds the Lost Legacy, then everybody loses.

The original game included 2 sets of 16 cards that could be played separately or mixed together to add a bit of variety. AEG plans to release the first set Lost Legacy: The Starship in July 2014. The second set Lost Legacy: Flying Garden and a third set Lost Legacy: Whitegold Spire will be released in Q3 and Q4 2014 respectively.

Mayfair Games has released details on their upcoming release: Villainy. In Villainy players take on the role of aspiring super villains competing to enact their diabolical plans before they are thwarted by the not-so-evil yet horribly named 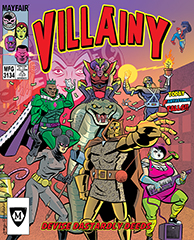 As an aspiring super villain, you are trying to make your mark in the world. In Villainy you are trying to be the first villain to complete 3 plans to beat Fantastiman (the pesky super-hero who watches over the city day and night). You must hire minions to aid you in your quest for world domination. You will have to do crimes and go to work as your alter ego to learn the skills necessary and to gain the cards required to see your great plans through to their triumphant end.

Expect to see Villainy hit your FLGS shelves on August 21, 2014. Pre-order details and additional information on the game and its components can be found on Mayfair Games Website. 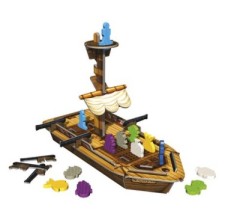 Come Sail Away with me

Z-Man announced on their website that they will releasing Klaus Teuber’s NorderWind which translates to the U.S. title North Wind for those not fluent in the German tongue (don’t act like you’re not impressed). Judging from the reviews/pictures I’ve seen for the original Kosmos release, North Wind is a strong contender for coolest components in 2014. In the game players will attempt to restore peace and prosperity to the cities of the Trade Alliance. Players will look to fight off pirate attacks and deliver food and goods to the besieged cities by arming their ships with cannons, sails, and crew. Z-Man’s News Announcement describes the game as such:

Pirates are raiding the nearby cities that are part of the Trade Alliance. The battered harbor towns call on your help, the Captains of the Alliance. Your tasks will be numerous, and some more dangerous than others. From supplying the towns with various goods to surviving encounters with deadly pirates, your ship will be your life. Let the North Wind carry your ship to victory! 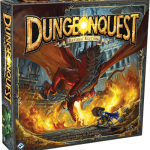 DungeonQuest Revised has been announced by Fantasy Flight Games. DungeonQuest throws players into the role of a hero exploring Dragonfire Dungeon. Throughout the game you will collect loot, evade traps and battle monsters in order to find your way to the treasure chamber and reap the rewards within. Be careful not to wake the sleeping dragon, Kalladra, or the competing heroes will be the least of your worries! Fantasy Flight’s news announcement describes the revised edition changes:

Players new to DungeonQuest will discover a fast-paced and deadly game of dungeon exploration and looting. For those players familiar with previous editions of the game, we’ve updated and revamped elements of the game to give you an even more dangerous dungeon to explore.

We’ve worked closely with Jakob Bonds, the designer of the classic editions of DungeonQuest to develop this exciting new edition, which delivers a combat system that harkens back to the classic editions of the game, and a Dragonfire Dungeon deadlier than ever before. We’ve also added a new Torchlight variant which allows you create a larger, and more complex dungeon as you explore.

It looks like another interesting release to mark on your calendars for Q3 2014. For more detailed information on the game play and what’s new in DungeonQuest Revised Edition, check out the game’s description page. 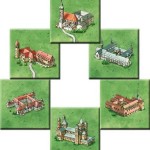 Holy Abbot in a Monastery, Batman!

Hans im Gluck released Carcassonne: Die Kloster (The Monastery…there’s that sweet language skill again that you’ll only get from our site), a small expansion for my beloved Carcassonne on Easter. This expansion has you replacing 6 monasteries from the base game with the new monastery tiles. These new tiles actually depict real German monasteries which is pretty cool. When a player places a new monastery tile, they can place a monk on the tile as usual (collecting points for each surrounding tile) or they can lay their meeple down on the tile, which indicates that the meeple is an abbot. Abbots score points at the end of the game for the monastery itself as well as for each tile connected to the monastery in the rows and columns leading away from it.

This expansion will be available from Hans im Gluck’s website until April 27. After that fans will have to wait until October 2014 for this to hit wider distribution.

Ascension packs on the theme

As reported on BoardGameGeek News last week, Stone Blade Entertainment will be releasing Ascension: Theme Packs on May 14, 2014. Each of the 4 Theme Packs will contain 12 cards that can be added to any Ascension game for an added twist on game play. The Theme Packs will revolve around the Rat King, Rat Queen, Leprechauns and Samael Claus. And if these Theme Packs aren’t enough to whet your Ascension appetite, fear not, the 4th standalone expansion Ascension: Realms Unraveled will be released shortly after in June 2014.

For additional information, head on over to BoardGameGeek’s Ascension: Theme Packs page and have a look. 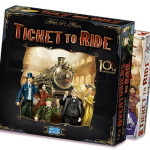 Days of Wonder opened up pre-orders on their site for the oh-so-pretty Ticket to Ride 10th Anniversary Edition. The new edition will retail for $100 and be available for purchase across Europe in mid-June and North America by late June 2014. No deadline date has been given for the pre-orders.

For more information and to order your Ticket to Ride 10th Anniversary Edition, visit Days of Wonder’s website

Finally, I just wanted to send our sincere Congratulations to this year’s Mensa Select recipients: