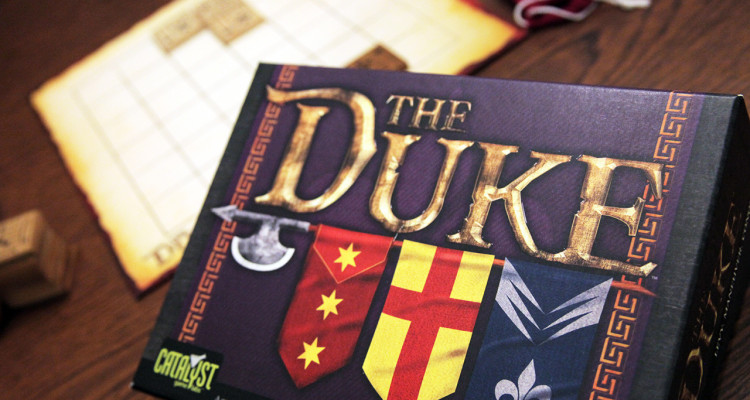 Far from the grasp of the monarch are duchies with no governing body. As a Duke, you lead your troops into battle, fighting for control of these outlying lands. With each swing of a sword and thrust of a polearm, your troops push you closer to victory. Will you slay those who stand in your way or fall to your enemies?

The Duke is a two-player abstract strategy game designed by Jerry Holcomb, Joe Huber, and Stephen McLaughlin and published by Catalyst Game Labs (Leviathans, Battletech, Shadowrun). Most comparable to Chess, the goal of The Duke is to command your various troops around a 6×6 grid in an attempt to capture the other player’s Duke. The game employs a unique movement system, in which each unit tile is double sided. After activating a unit, the tile is flipped over to reveal a different pattern of movement and attack. You will use this system to out maneuver your opponent with the hope of landing a killing strike. 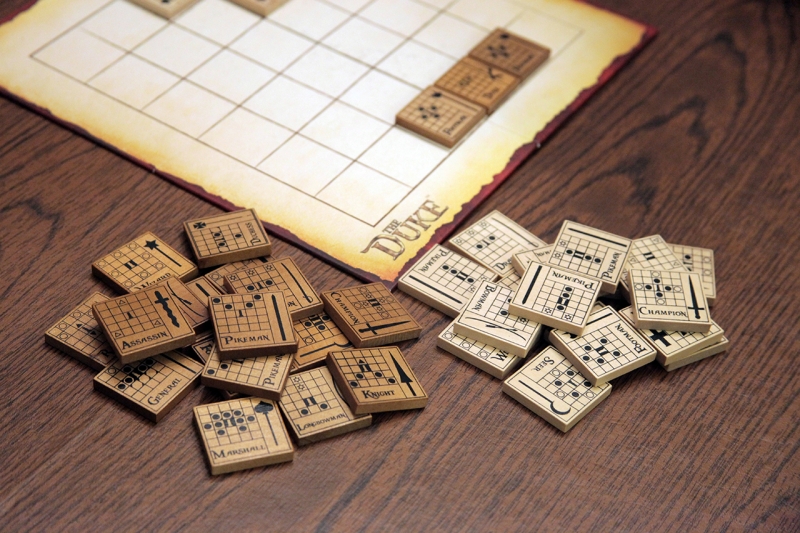 The Duke is a simple design. In the base game, there are two sets of 19 unit tiles, one in a natural wood color and one in a dark wood color. The square unit tiles are made of lightweight wood and introduce a nice tactile element to the game, in addition to facilitating the movement system. Each unit is detailed with a 5×5 movement grid, the name of the unit, and a small pictorial representation of that unit.

The game board is a 6×6 grid made of cardboard that folds down to be more compact. While the board has held up well, I consider it’s construction to be just adequate. It does not resemble the same quality as the unit tiles and doesn’t provide the same heft as a chess or backgammon board. Overall, the artistic design of The Duke is clearly function over form. The game features little to no aesthetic material outside of the box art and the small pictures inked on the pieces. This makes The Duke a fairly plain game to look at, but one that clearly conveys all of the information on the board. 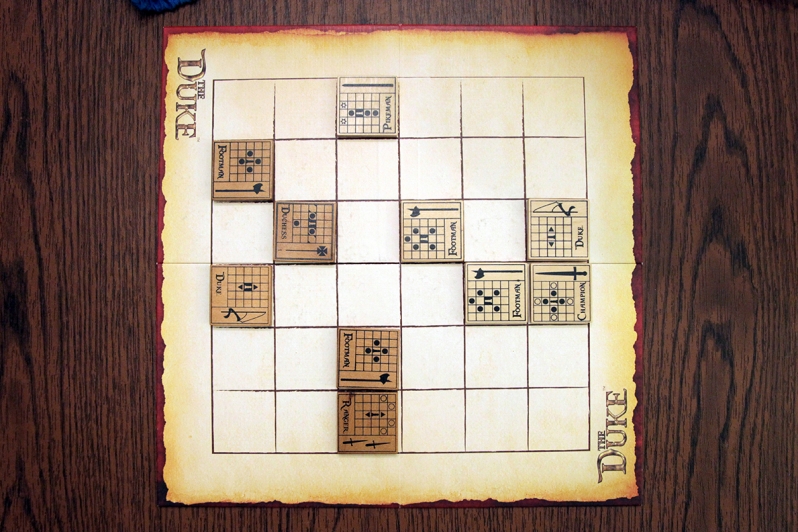 To begin The Duke, each player takes two (2) Footman units and his/her Duke. The rest of the units will go into the respective player bags. The player who will go first sets up his/her three (3) units first. The Duke must be placed in the back row on one of the two middle spaces. The two (2) Footman units may be placed in any of the spaces adjacent to the Duke. Then, the other player does the same.

Starting with the first player, both players will alternate turns until someone’s Duke is captured. On a turn, these options are available:

Play will continue until one player has captured the other player’s Duke.

So, that’s the Duke. It’s a simple design that provides a wealth of tactical depth. As hinted at in the review, this game seems to be as much an homage to Chess as it is a reimagining. The game boasts 15 unique units that each have their own strengths and weaknesses. While this would likely be enough to keep things fresh, the addition of the random unit draw and double-sided tiles makes no two games of The Duke the same.

The Duke is also largely expandable and customizable. There are several extra tiles included in the base set that provide terrain, a capture-the-flag game variant, and an NPC dragon that will throw a wrench in your best-laid plans. Additionally, there are several themed expansions available including Robin Hood and Arthurian Legends.

On that same note, for the complete lack of art and aesthetic flair, the game can be considered fairly thematic. The unit tiles are smartly designed to reflect their unique abilities and it doesn’t take much creative imagining to picture yourself duking it out (get it!?) with Longbowmen, Wizards and Dragoons (a personal favorite). Overall, The Duke has proven to be an excellent 2-player option. Game length has varied and may have actually increased as we’ve become better at the game, but it is still easily playable in 30 minutes. The unit draw is the one standout concern, as it could easily be seen as an unappealing addition of randomness. So far, I have found the game to be well balanced even with the random draw. While you may have to adapt to the different units you draw, games have rarely been won or lost based on a “lucky draw.” Typically, if drawing the perfect unit at the perfect time spoiled your day, you were probably in trouble a few turns ago. Additionally, the rule-set leaves the game open to custom rules and variants that you could easily employ to offset any concerns.

After watching a few minutes of The Duke game play, I immediately fell in love with this game. It was so reminiscent of chess, but with a few tweaks that made it a little softer and more approachable. I had high hopes after picking it up and was pleased to find everything that I expected. The game provides a basic ruleset and a very cool movement mechanic that fosters more depth than may be initially expected. Best of all, the game is short to play and easy to learn/teach. I was happy to see Kelly B! take such a liking to this game because it gives us a two-player experience that we can never really master, but that we can get to the table whenever we feel like it. Unlike some of the other games that I play, like Netrunner or Star Wars: The Card Game, there’s nothing here that the opponent doesn’t know about. All of the information is public and the challenge is in the live gameplay rather than the preparation. As someone who primarily plays two-player game, The Duke offers a unique experience that I don’t get from other games I own. It definitely has a firm spot on my shelf.

I was a Kickstarter backer of the original version, and while Catalyst was terribly, horribly, no-goodly late with the production of this product, it appears to have served them well in the end. Be aware that my thoughts here are from the position of an outsider, peeking in; I don’t have much opportunity to indulge in two-player games, and have not yet had a chance to play this title. From this point of view, I do admire the breadth of abilities and different options available from the range of units, but remembering what those units do on the flipside would drive me perhaps off the edge of eccentricity and into outright madness. Otherwise, this does appear to be an appealing little game, unlikely to play out exactly the same twice. For fans of fantasy and literature, expansion tilesets featuring the Three Musketeers and the Cardinal’s men are available, as are a Robin Hood-themed set, and one featuring Robert E. Howard’s Conan the Barbarian and Kull the Conqueror.

I really enjoy this game. It allows you to work a little bit of intelligence and strategy into a fairly simple game. With that being said, the random tile draw still makes for a game complete with the element of surprise. In my head, I might be able to work out how the next couple of turns might go, but then a new piece is played and my whole plan is ruined! I’ve never played chess, so I can’t comment on the similarity or whether the Duke is better. But, I can say that I really appreciate having the movement patterns displayed as I’m playing, because they change from turn-to-turn as you move your pieces around. This was my #2 game for 2013, so I’m sure it’s no surprise to say it’s one of my favorites!

The Duke is a great abstract strategy game. As Buns mentioned, it plays like chess, but each game will be different because of the random tile draw. It adds great replayability and forces you to react to every new tile drawn. I have a lot of fun with reactionary games like this. You can try to develop a long-term strategy, but the playing field can change at any moment. This game includes the perfect touch of randomness to a strategy game to make it really interesting.

I really love and appreciate the aesthetic presentation of boardgames and I find most of my critiques coming from this area.  At first glance, The Duke may easily put off people who value amazing art and components.  While not as pleasant on the eye as I would like, the solid wooden pieces are highly functional and the symbolism is relatively clear; although the command action can be hard to read. The board itself is extremely dull and could easily have been spruced up to provide a bit more of a thematic feel. From an aesthetics standpoint this game is ripe for a “designer’s edition.”

As for the gameplay, I really enjoyed this little abstract title. It packs a lot of strategic decision making into 2 bags and a board.  The mechanics are simple to learn and easy to teach. I did find understanding and remembering the different movement actions, on both the front and the back of the tile, to be daunting at first but enjoyable nonetheless. The word random usually scares me but being able to adapt to the unique game pieces drawn and the resultant game state was one of the things I appreciated most about The Duke.  Overall, I would highly recommend this for those looking to add another 2 player game to their collection.