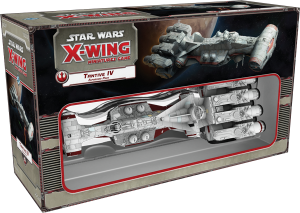 It wouldn’t be a Boardcast News post without something ridiculously cool coming from Fantasy Flight Games.  This week they have released details for the new Tantive IV ship;  causing nerds everywhere, myself included, to change their underpants, while Smee’s reaction could be summed up as: #itshugeandIwantitsomuchrightnow.  This starship is so huge that it is divided into two sections,fore and aft.  Here’s what FFG’s site had to say about the newest ship in the fleet:

Designed for use in the game’s Cinematic Play and Epic Play formats, this eye-catching starship also comes with rules for using “energy” to power its shields, turbolasers, and unique abilities; a huge range ruler that allows the CR90 corvette to fire against enemies as distant as Range “5,” and all the tokens and templates you need to bring this starship to life on your tabletop. Furthermore, the expansion includes a set of six new missions for Cinematic Play that can be woven together to form a compelling campaign, and you’ll also find twenty-four upgrade cards, many of which can also be used in the game’s Standard Play format.

Earlier in the month Funforge announced a digital version was in the works for their hit game, Tokaido. Well, Funforge has decided to put those plans on the backburner and focus on a new project: the Tokaido Collectors Edition!  Coming to Kickstarter on February 26th, Tokaido Collectors Edition promises to bring even more elegance and serenity to your journey from Kyoto to Edo.  As a devout Bauza fan, I will definitely be backing this project. Here’s what the new edition will include: 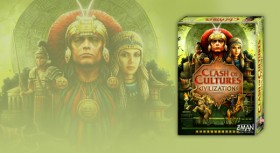 “Rejoice!” So says Z-Man Games.  Fans of Clash of Cultures surely will with the news that the first expansion, Civilizations, will be available in Fall 2014 for purchase.  Horribly unoriginal box title aside, this expansion promises to bring 14 new civilizations (oh, I get it now), each with their own unique advances.  The big news is that the elephants and horses so predominantly shown on the Clash of Cultures box will be included, but only for those civilizations that are skilled in riding elephants and horses.  Makes sense. 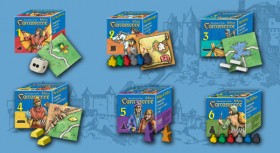 Carcassonne Mini-Expansions – Add a little more to your town

Z-Man has also announced that all six Carcassonne mini-expansions will be available at your FLGS in April.  The 7th mini expansion, Crop Circles, will be playable for those who collect all six.  I wonder if the 8th mini expansion will introduce aliens who have located the French town via these crop circles and abduct the farmers who always lose me the game. 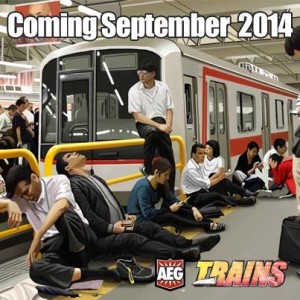 Japan is Getting More Trains

AEG has announced that Trains, its popular deckbuilding card game with a board and cubes, will have an expansion released in Fall 2014; Trains: Rising Sun.  Rising Sun will bring Wesley Snipes and Sean Connery to the big screen….wait, wrong Rising Sun.  Trains: Rising Sun will add a ton of new cards and a couple of new boards (two 2-player boards and a 4 player board) to the mix.  I finally had a chance to get my copy of this to the table and it was an instant win (although I really lost) for me so I am really looking forward to this.

Also announced from AEG, Seventh Hero, by Kuro, is a new title in their “Big in Japan” card game series.  This drafting bluffing game requires players to assemble their team of seven epic heroes, each providing a unique power, before the other players do.  Oh, and you can’t draft the same hero twice.  Piece of cake (mmmm cake), right? Nope! It’s a blind draft so you will have to use your sleuthing skills to aid in your quest.  Fans of Love Letter and Cheaty Mage will no doubt want to keep an eye out for this one. 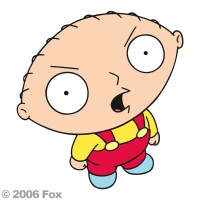 As reported on BoardGameGeek News, Gale Force 9 has been active on the “lets acquire as many TV licenses as we possibly can” front.  At the New York Toy Fair this week they were seen promoting new board game titles for Family Guy, Sons of Anarchy, and Homeland.  I have been suitably impressed with their Spartacus and Firefly adaptations so I am going to give them the benefit of the doubt here.  If the Homeland game is anything like the show I will be yelling constant profanities at Carrie Mathison! 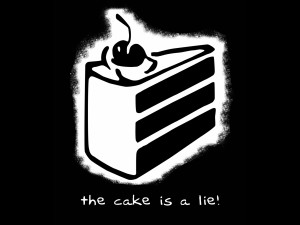 Aren’t you GLaDOS  They Are Making This Game?

Cryptozoic has announced that they will be releasing a new game based on the hit video games Portal and Portal 2.  The game is tentatively titled Portal: Uncooperative Cake Acquisition Game and is designed by the creators of the actual video game.  The game will come with custom playing pieces that include test subjects, sentry turrets, weighted companion cubes, and of course cake (mmmm cake). Look for this one to release in the fall of 2014 and retail for $50.  This is something I will definitely Chell out for.

And in Digital Board Game News…

Robinson Crusoe discovers way off table and onto iOS

While stalking Portal Games on Twitter I discovered that they plan on releasing an iOS version of everyone’s favorite stuck on an island and can’t beat a scenario game, Robinson Crusoe: Adventures on the Cursed Island. This may be old news but it was the first I had heard of it.   This would be the perfect game to capitalize on asynchronous multiplayer mode.

Escape: Curse of the Temple

Queen Games has teamed with Lemonade Game Labs to bring us their smash hit, Escape: Curse of the Temple.  This project will be preceded by a Kickstarter campaign that will be coupled with their Escape: Big Box anniversary edition.  I am a huge fan of the tabletop version and a bit skeptical on how they plan on recreating the frenzied feeling you get rolling the dice with friends and family.   If I have to constantly tap my screen to roll the dice I may wind up breaking my iPad as this game really gets the blood flowing.  Keep an eye on this one!