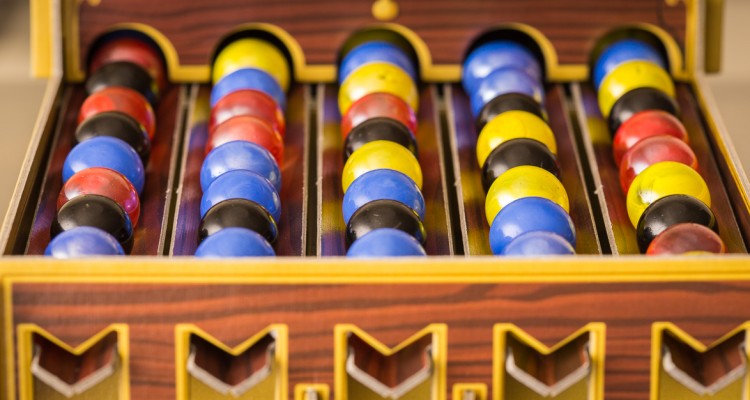 It’s finals time at the Horribilorum Sorcery Academy for Witty Witches and Wizards! All that stands between you and graduation is your final Potions exam with Headmaster Humblescore. Throw on your cloak, grab your cauldron and beakers and let’s get to cookin’.

Potion Explosion is a satisfying pattern-recognition and set-collection game from Stefano Castelli, Andrea Crespi, Lorenzo Silva and Horrible Games. It challenges you to bring your Candy Crush skills to a more tangible medium by collecting gross Ingredients like ogre mucus and fairy dandruff—yuck!—to make various concoctions and rack up points. 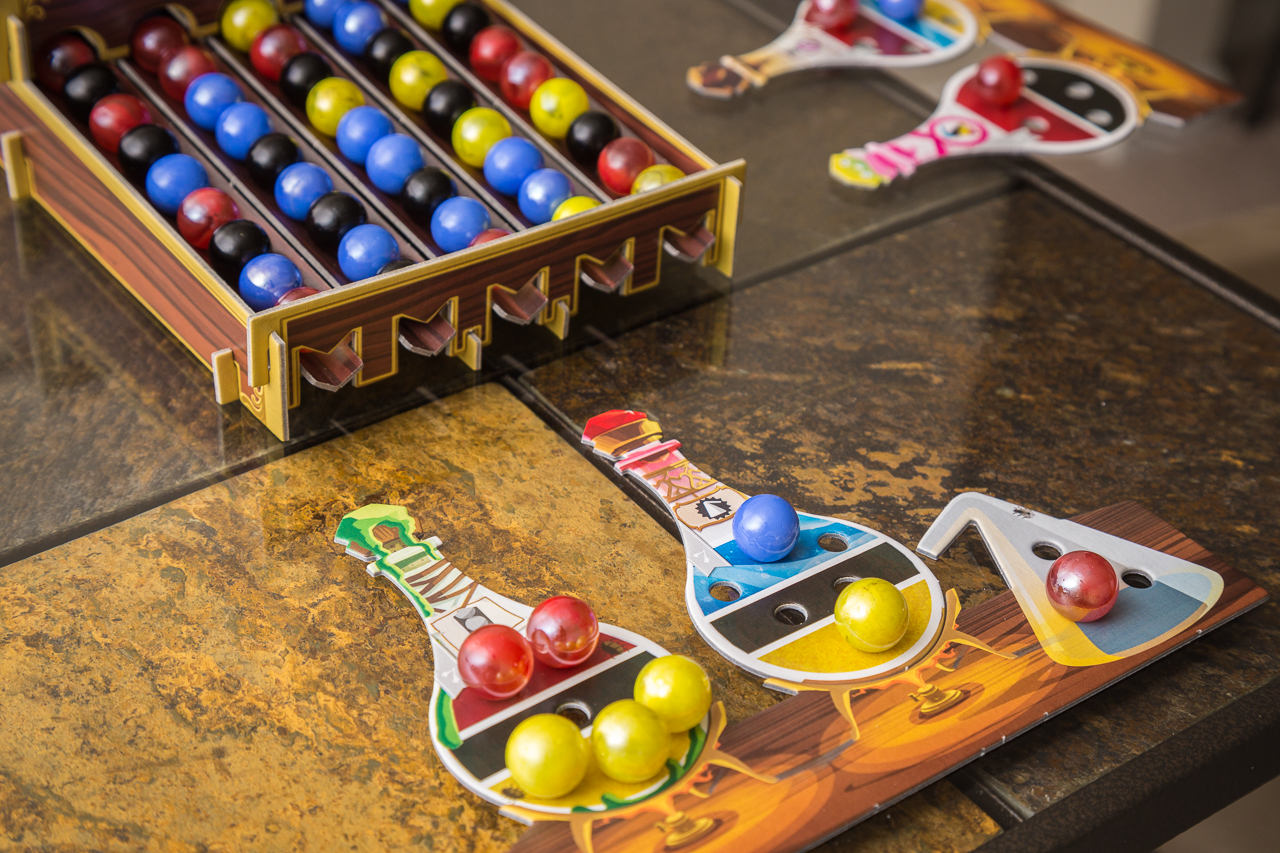 From a cute and craftily-designed marble dispenser, you will be collecting Ingredient marbles in order to complete the recipes for your chosen Potions. To collect these Ingredients, you begin by pulling a single marble from one of the rows. If doing so consequently makes marbles of the same color collide, this creates a Potion explosion, allowing you to collect all of the marbles involved. This can, in turn, create a chain reaction – so more explosions equals more Ingredients for you to collect! Collected Ingredients are then added to the concoctions that are waiting at your workbench, while any remaining Ingredients are then randomly returned to the dispenser.

A wonderful addition to any gamer’s collection of lighter, family games…
When you fill all of the matching slots on one of your flasks, a Potion is created, thus scoring you points and granting you the ability to drink it and trigger its special power. These one-time-use abilities allow you to take extra Ingredients, steal from your opponents and use mismatching Ingredients to finish a Potion, to name a few. In addition to the base award for each Potion that you craft, you are awarded points for the sets of Potions you complete (three-of-a-kind or one of each of the five different Potion types), adding another layer to the set-collecting challenge.

A lightweight, easy-to-learn game, Potion Explosion is a wonderful addition to any gamer’s collection of lighter, family games. The tactile component of actually removing marbles to have them crash into each other only adds to the satisfaction of finding the perfect marble to remove to get that set of five blue Unicorn Tears and finish an Abyssal Draft or Potion of Prismatic Joy. Unfortunately, that satisfaction can sometimes come at the cost of some mild analysis paralysis as players desperately search for and calculate the precise marble that should be removed to result in the greatest landslide of Ingredients.

The Potion abilities present ample opportunities to expand your ingredient collection so that a single turn can actually net a large number of Ingredients. The other really helpful thing is that a Potion can be consumed for its ability in the same turn in which it is completed. Finished a Potion of Prismatic Joy? Go ahead and use it to add leftover Ingredients to another Potion. The downside to creating combos, with Potions to collect more Ingredients and concoct more efficiently, is you may fall behind. This, at times, makes it more difficult to catch up, especially if opponents are completing Potions of a higher point value. Scoring discrepancies could occur. And, while it wasn’t necessarily a problem while we played, it could be an issue especially if it happens repeatedly. 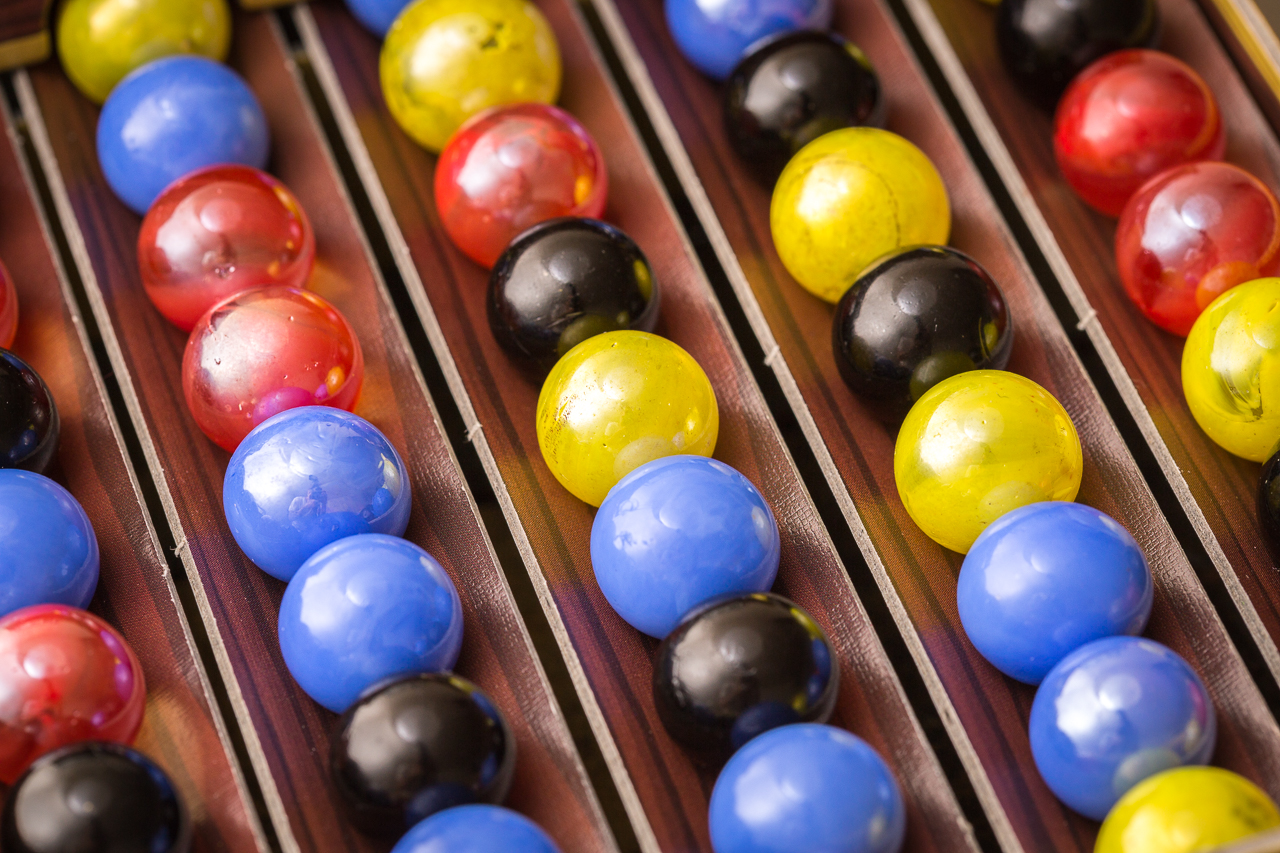 Potion Explosion is fast-paced (assuming that everyone doesn’t stare at the dispenser for what feels like forever each turn), engaging, satisfying and fun. If nothing else, pour those marbles into the dispenser at the beginning and just try to tell me it didn’t feel great.

If you are in the market for a new game for your family game nights or for those times where you have friends over who enjoy a lighter game experience, thenPotion Explosion should be high up on your list. The rule set is very simple and the theme is very engaging. Almost everyone has played Bejeweled (or one of its many clones) and players can quickly grasp the core mechanics of the ingredient dispenser. This, of course, is the most fun part of the game, trying to find that perfect move to give you a bunch of explosions. Even if you don’t need the colors, chaining together a bunch of ingredients is extremely fun and satisfying. The potion-making and set-collecting adds a layer of strategy that is very easy to swallow for players of all levels. Mixing and completing potions to then gain bonus powers to extend your turn is really where the game hinges in the competitiveness of the game. There is a very small element of “take that” in one of the potion powers but you can easily exclude that from your plays if you want it to be a friendly experience. I do really enjoy this title and have fun with each play. I am, however, a little leary on how long the novelty will last. There is not a whole lot of variability when playing, so the replay value could run its course a little quickly.

I love finding success after taking a risk on a game. My purchase of Potion Explosion wasn’t completely blind, but it was definitely less informed and more on a whim than usual. Looking over it, I was pretty much banking on one thing (and was totally right): Kelly B. would love it. What I didn’t count on was her being an indomitable force that would leave me in second place by 20 points every game. Her strange prowess for collecting snot and tears (working in pediatrics pays off!) aside, Potion Explosion has yet to fall flat with anyone, really. It’s longevity is fairly questioned by the more gamerly bunch, but it’s a standout among the family and friends who don’t game as often. The puzzle is engaging, the thematic representation and polish of the production is above average, and the game proves to be varied enough across plays for my taste. I’m surprised how much I’ve enjoyed what is essentially analog Puzzle Quest and considerPotion Explosion to be one of the most enjoyable games I’ve played this year.

Potion Explosion is a charming family oriented game that takes a novel marble drawing mechanism and builds a simple set collection game around it. While I appreciate the ingenuity in trying to transpose the wildly popular “match three” app craze onto the tabletop, the game as a whole falls flat for me; the novelty of manipulating and collecting the marbles simply wears thin after one or two plays. The potion special abilities allow for a few encouraging combinations but it just isn’t enough to carry me through the full 45-60 minute play time. The table presence and tactile components alone will appeal to younger gamers and I would recommend giving this a try if your predominant gaming group is casually oriented. For my tastes however, there are a host of more interesting games to fill an hour.

First impression: While there isn’t much else to be said that hasn’t already been stated, I will simply reinforce that this game is neat with an inventive and refreshing method to collect your resources. While concerns of analysis paralysis exist, this is a light-hearted game that is generally self-contained, so there’s no harm in helping each other out to better optimize your turn. That said, we did not have the magical power in play to steal an opponent’s ingredients, but even so I don’t think it would have transformed the game into something vicious. A great game for everyone to enjoy!