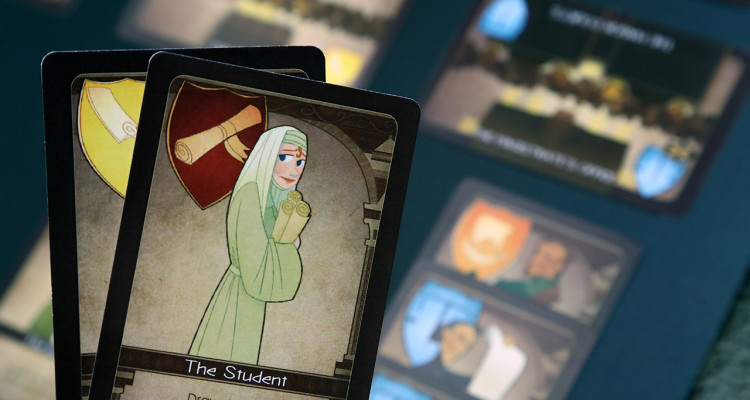 Eat. Sleep. Drink. Start a coup. Such is the life of a citizen in a generic medieval city. As an aspiring leader in an uninspiring place, you decide to join the clandestine battle for influence over the city’s prominent members, hoping to lure them to your cause. Will you garner the trust of the citizens and lead the charge against the corrupt monarchy or will you head to the tavern and forget what you were doing?

Designer, podcaster, and all around nice guy, Jason Kotarski (Great Heartland Hauling Company and Frog Flip) has teamed up with one of 2014’s most prolific designers, and an equally nice guy, Philip duBarry (Revolution, Courtier, Canalis) to bring us Fidelitas, a light-hearted hand management card game for 2-4 players. You can now also add publisher to Jason’s list of credentials as Fidelitas will be the first title released from his new publishing company, Green Couch Games.

In Fidelitas, players assume the role of (un)faithful citizens in a generic medieval city attempting to exert their influence and gain the trust of the city’s prominent guilds and citizens; thereby leading a coup against the corrupt monarchy. Players will utilize the powers of their citizen cards (Virtus cards) to influence the board state, hopefully accomplishing their hidden objectives (referred to as Missio cards…if you haven’t caught on that’s real Latin we’re speaking, people) along the way. The first person to acquire the requisite number of objective points will win the game. 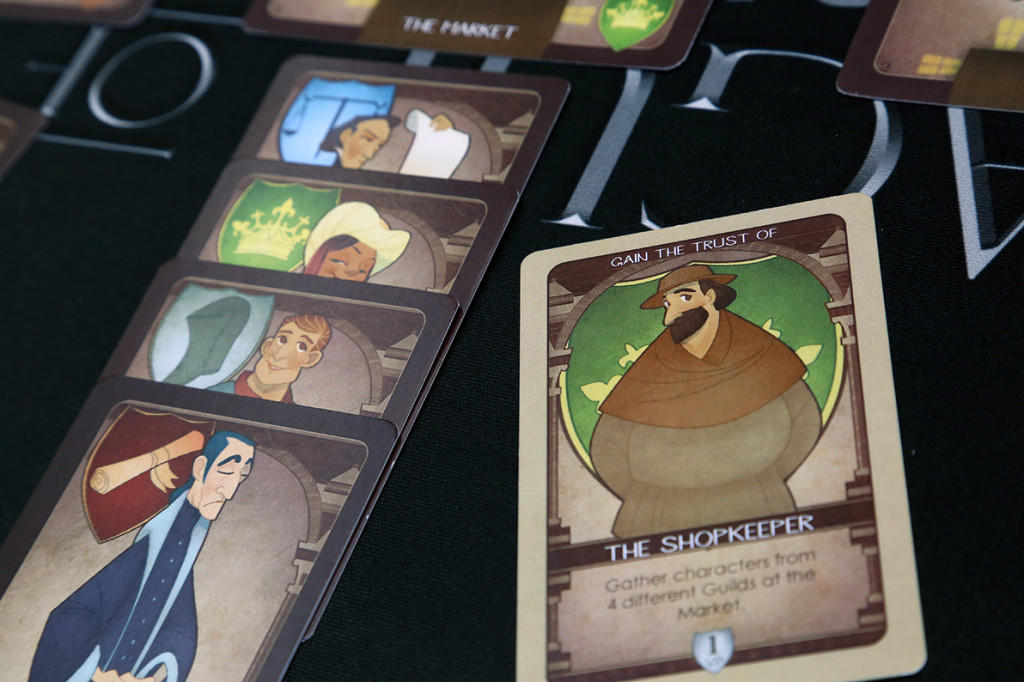 From a components standpoint, Fidelitas is strictly comprised of cards; 50 Virtus cards, 20 Missio cards and 5 guild location cards. While the copy we received was a prototype, we were informed that the art and design were almost final. Even unfinished, the art in this game is beautiful! Artist Jacqui Davis (Euphoria) has brought the individual characters to life with her playful art style. Each illustration is colorful and evocative; reminiscent of an old Disney film set in medieval times. In my opinion, this aesthetic will only help to broaden the appeal of this game.

Fidelitas is extremely simple to setup and just as easy to teach.

Place the guild location cards in the middle of the table in the following order: Judiciary, Academic, Tavern, Artisans and Commerce. The guild cards have 2 locations specific to that guild (one of each side for a total of 10 playable spaces). Next, shuffle both the Missio and Virtus decks and deal two of each to every player. Finally, deal one virtus card to each location in the center of the board. Determine the first player, grab a beer, and start the revolution! 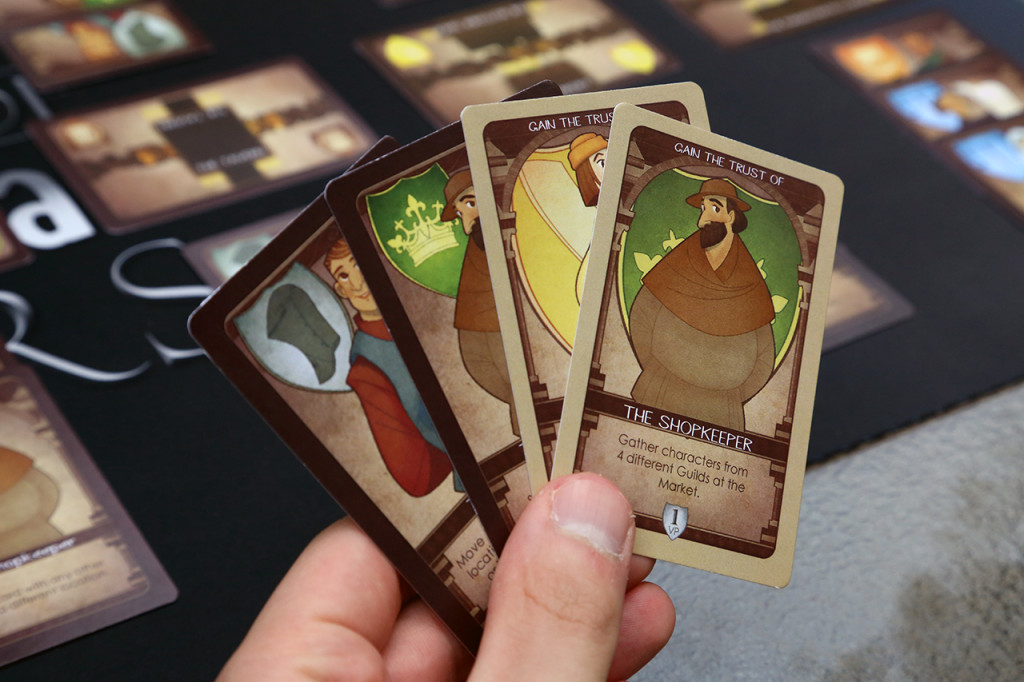 How to Dominate Said City

On a player’s turn they complete the following actions (in order):

Play continues like this until one of the two end game conditions are triggered:

A copy of the beta rulebook has been provided on BoardGameGeek for those who wish to have an advance look.

Mechanically speaking, Fidelitas is extremely simple: play a card, score (if able) and draw. Turns are short; offering solid tactical decisions with very few moments of over-analysis. The depth of this game lies in your ability to manage the card powers/interactions presented to you while mitigating the scoring opportunities of your opponents. 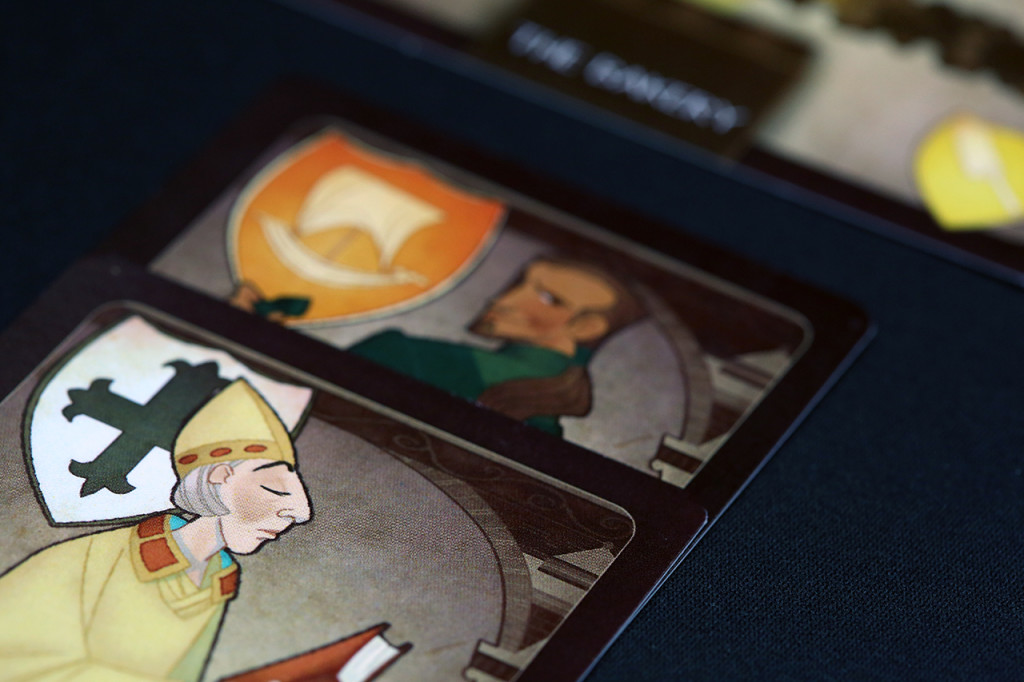 Timing is crucial in the game as you only score Missio cards on your turn. However, manipulating the correct pieces to score those Missio cards will not always be of your own doing. A little luck and/or a misstep from an opponent will often be what you need to complete them. This keeps you engaged throughout as you are partially vested in the actions of your opponents. Those players looking for a game where you can plan out every action in advance may find that the ever evolving city will surely frustrate them.

Luck of the draw can be a swing factor in most card games; Fidelitas is no different. Drawing into easily accomplished, or sometimes already accomplished, Missio objectives can quickly put you a leg up on the competition; and vice versa if your draw is not so friendly. The designers have taken steps to mitigate this by incorporating the Tavern location; a universal location allowing players to discard a Missio card to draw a new one. All of our games of Fidelitas were very close. So while it requires a turn to take this action, the need to have Missio cards that can be accomplished far outweighs the loss of a turn. And who knows, your opponents may be moving the board around before your next turn, potentially aiding your quest in the meantime. At the end of the day, a little luck is going to be needed for your coup to be successful. This random element did not detract from my gaming experience but I can understand how it may frustrate some folks; especially if a player is dealt Missio cards which hamper their progress from the outset. 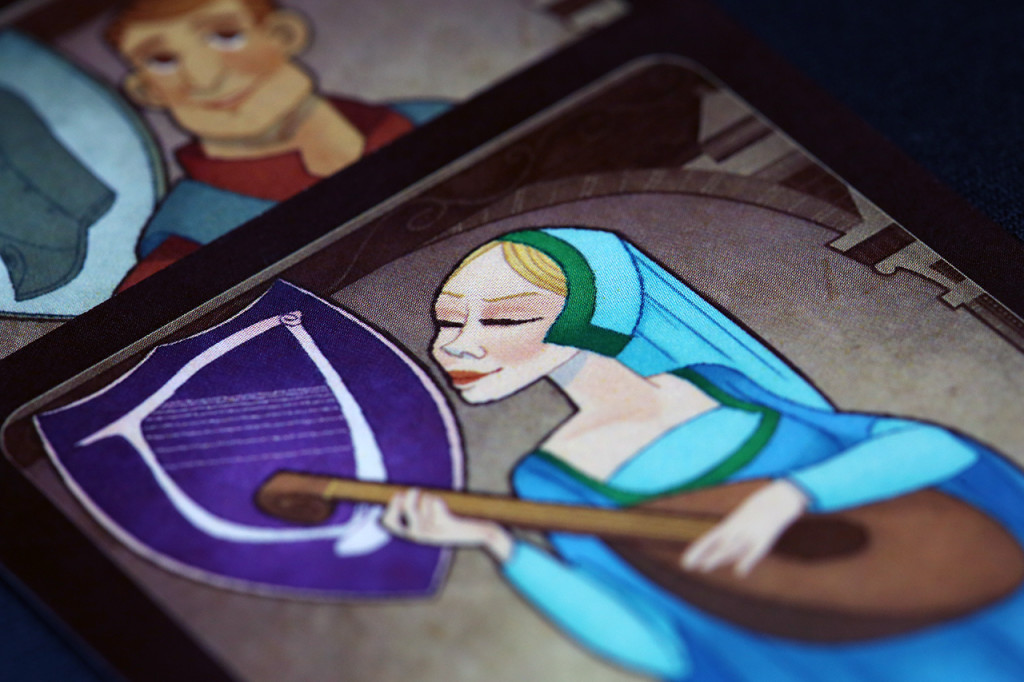 The first few playthroughs will have you getting your feet wet learning the abilities/interactions of the cards as well as the required Missio objectives. Fidelitas, while extremely accessible to new players, is a game best played with informed players.  I highly recommend reviewing the Missio cards beforehand with all new players so that they are able to get a flavor of what to expect. This will only serve to heighten your enjoyment of the game as it takes on a whole new level of amusement when defensive maneuvers are assimilated to derail your opponent’s objectives. That being said, the player interaction is not as contentious as you might think. The fact that everyone’s objectives are hidden and the board state changes on every turn softens the tension that may otherwise exist in games where you are trying to directly foil the acts of your opponents.

For anyone looking for a short length game which offers fun and engaging decisions in a small package, look no further. The stunning art, simple mechanics and tactical gameplay make Fidelitas a worthy addition to your filler game collection.

When I first saw the prototype Jason had on hand at Origins, I was immediately drawn in by the beautiful artwork. As with all of her projects, Jacqui Davis has added an elegance to this game that really gives individual character to these medieval peons. While billed as a filler game I would personally slot Fidelitas in slightly above that category as it scratches a tactical gameplay itch that I don’t typically find in most short length filler games. The fabulous artwork coupled with the simple mechanics make this game extremely accessible to non-gamers without alienating more hardcore gamers.  Fidelitas is a delightful debut for Green Couch Games and hopefully not their last.

With art reminiscent of childhood classics like The Black Cauldron and The Sword in the Stone,  Jacqui Davis and Darrell Louder bring light-hearted charm to Green Couch Games’ equally light-hearted design. With simple hand management at its core, Fidelitas can easily find its way to the table with a variety of players in an equally varied number of settings. For such an easy-going game, a fair amount of strategy is present, keeping you engaged as you try to figure out the puzzle and mitigate other player’s moves. Most importantly, the game is fun; and that’s really all you need to know, right?

Luck of the draw is a risk, particularly with some of the 2-point Missio cards, but you’ll easily be able to play Fidelitas enough for this to average out. Still, bad opening hands can be difficult to overcome. Though it won’t happen every game, some rounds of Fidelitas could leave you a bit flustered as you fall behind a seemingly insurmountable leader.

In the end though, this doesn’t spoil the show, as Fidelitas is a 30-minute card game that doesn’t need to be taken too seriously. When things start to go south, pour yourself another pint and forget your troubles. You can always start the next revolution.

Fidelitas is an enjoyable diversionary game in which you can play a few quick rounds with your mates before getting on down to hitting the tavern in earnest. As you might know, luck isn’t my strong suit, so it’s good to see that this is a game that doesn’t completely revolve around the draw. There can be a bit of frustration, seeing someone play off a series of easy Missio cards while you’ve got the one needing the representation of all nine guilds, but that’s what a good strong drink is for.

At times it was enjoyable planning your strategy in Fidelitas, while other occasions had me on the verge of frustration due to the swingy gameplay. Some games felt they were over far quicker than I had anticipated as someone would fall into some easily obtainable objectives. The balance of the point values in relation to the ease or difficulty to accomplish the Missio cards felt off, which tends to make the game a case of luck right out of the city gate. There will be times you are dealt a Missio that is already present on the board and other times when you’ll have to work for them or just sit back and hope to get lucky. As is the case with one card objective that has you gather one character from each of the nine guilds present in the city. Accomplishing this relies heavily on luck and can be nullified if one of the guilds becomes discarded entirely. (Three of the nine guilds have only a single card.)

Just when I was building up for a larger-valued Missio objective, someone would take the victory with a collection of smaller, seemingly easier missions. It is a race to see who can come up with the required victory points, but sometimes you’ll feel hindered by seemingly unobtainable Missio card objectives. Yes, you can exchange them at the Tavern, but you’ll have to hope for a favorable outcome on the draw. As mentioned in the review, it will take a visit or two to the medieval city, to gather information about the Missio cards to play more defensively. Even with that information, though, I felt the pressure of getting those victory points!

Lastly, I would like to mention the art and design which is very attractive. The colors are vibrant atop the more neutral backdrop of the cards and the characters have an inviting (even the Swindler!) and playful vibe. Lovely art aside, I’m not sure that I can whole-heartedly recommend Fidelitas based on my experiences with it.

The League of Nonsensical Gamers would like to thank Green Couch Games for kindly providing us with a prototype of Fidelitas for this preview.

Fidelitas is currently funding over on Kickstarter. If this game piques your interests, head on over to the campaign page by Aug 31, 2014 to join the revolution and grab your own copy. For $19, you receive a copy of the game along with all reached stretch goals.