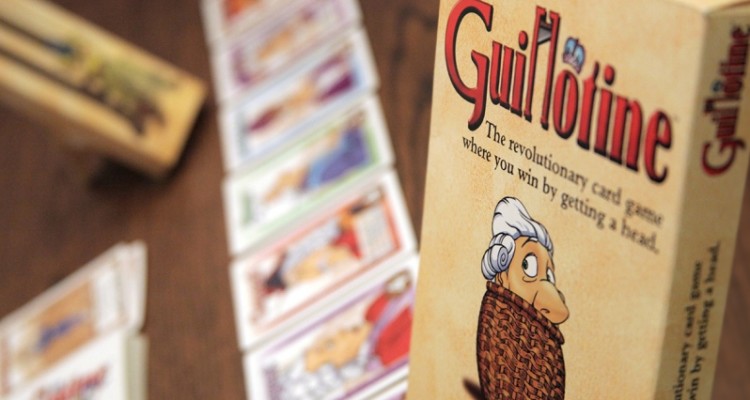 The Revolution has begun and it’s your time to shine! You and your fellow executioners have set up shop in the town square, with sharpened guillotines ready to drop. Now the race is on to pick the least popular nobles out of the line and make sure your blade gets the job done. How else will you become the most famous headsman around? 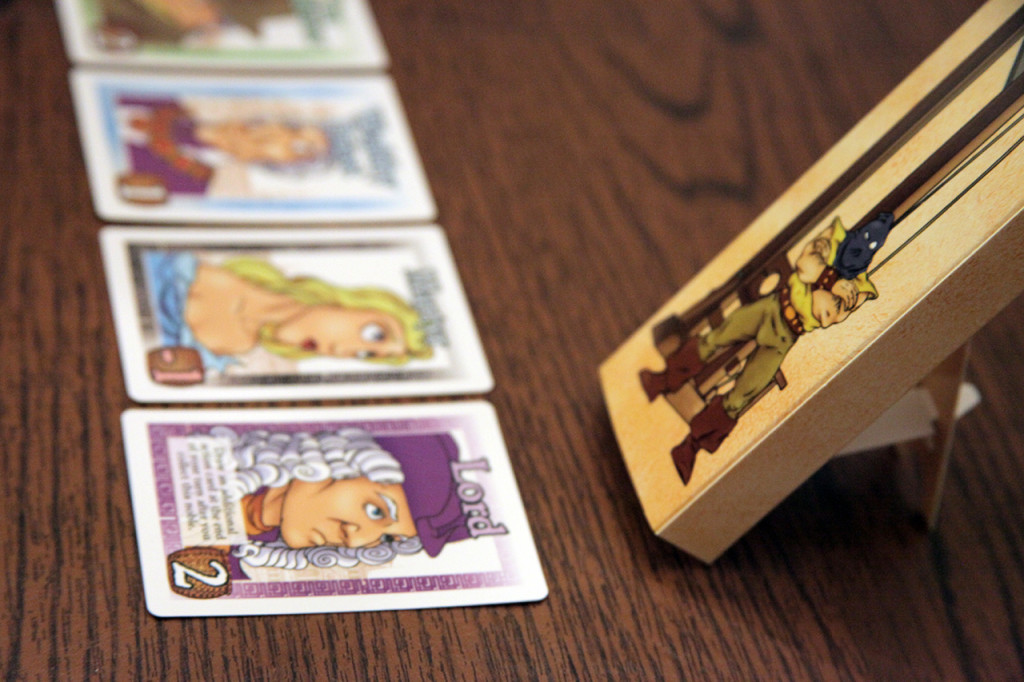 Guillotine is a card-management game for 2-5 players, designed by Paul Peterson. You take on the role of an executioner looking to make more heads roll than your opponents. Using a range of card options, you will manipulate the line of fated nobles to make sure that only the least popular of these oppressors hits your chopping block. Doing so will earn you more points and ultimately lead to you being hailed for your work!

The theme of Guillotine is a bit abnormal, but done in a very light and funny way. We’re not entirely sure why the nobles are patiently queuing for their inevitable demise, but everything else works well. The game consists of one deck of nobles and one deck of action cards. The art is light and silly across the board, with a lot of flavor. While it can easily be overlooked during play, taking a minute to appreciate what’s happening thematically is often good for a chuckle. 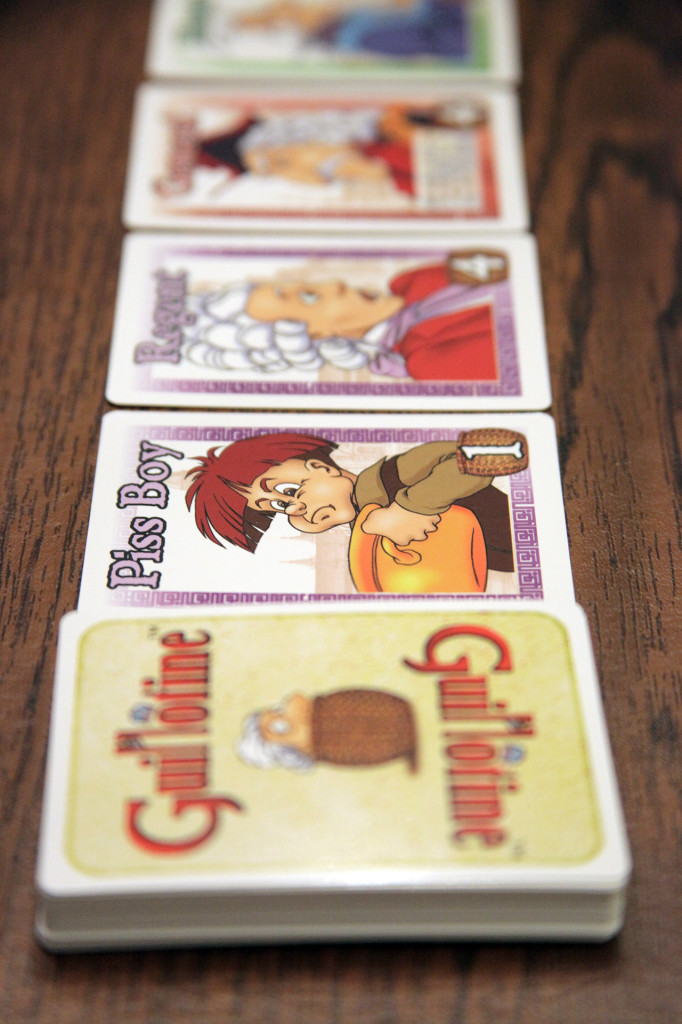 The cards are accompanied by a box insert that doubles as a standee, featuring an executioner and his guillotine. While this is a nice touch, it comes at the price of functional packaging. Being a toploaded box, the loose cards often have to be crammed back in and never quite fit as they did when first opened. Getting them out is a similar challenge, as you essentially have to pour the cards out of the box when it’s time to play. While a box with a lid would have been preferred, this doesn’t take away from the gameplay at all.

To begin, each player is dealt a hand of 5 Action Cards and 12 random Noble cards are placed in a row, or line, from right to left. The rightmost noble is next on the chopping block.

On your turn you will perform 3 actions:

Take turns until all 12 nobles are executed, or a separate round-ending condition is met (some nobles and Action Cards end the round). Then deal out 12 more nobles and continue play. This process will be completed one more time, for a total of three rounds (days). At the end of three rounds, whoever has the most victory points in their pile of heads wins! 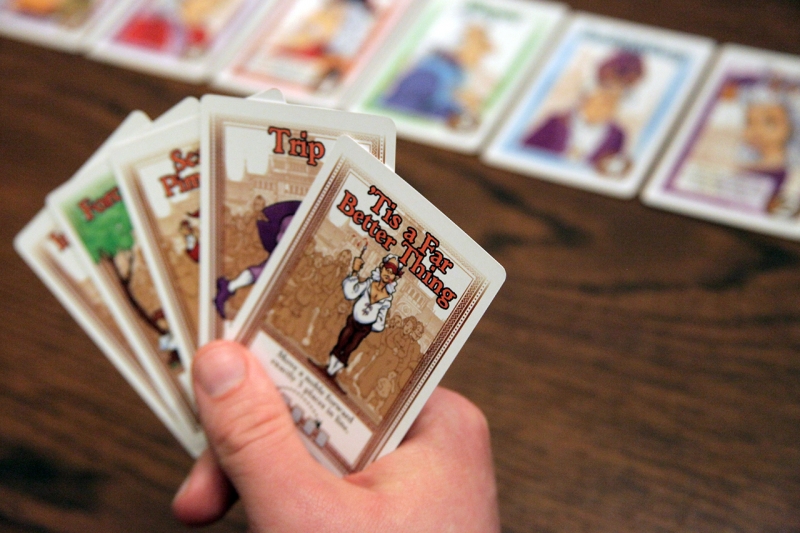 We’ve had a ton of fun with Guillotine. Getting in plays with the full range of 2-5 players, we’ve found that it manages to stand up well across the board, though more players was preferred. With 2 players, the Actions Cards remain fresh, as you are much less likely to see a duplicate; however, its much easier to get the nobles that you’re after given that there are less players fighting over them. With 3-5 players, things get much more interesting and the game takes on a bit of “take that.” In a game this light, it’s a welcome addition that keeps all players engaged.

It is worth noting that Guillotine takes up more space than we expected, as the line of 12 nobles stretches pretty far. Our attempt to play this on a small IKEA coffee table didn’t work terribly well. This is a small gripe, however, and will likely not impact most players. It just makes it a little less travel-friendly than some other small box card games.

Put simply, Guillotine comes recommended because it’s just plain fun. It’s a great family-friendly filler (provided you’re okay with your children chopping people’s heads off), it can be easily taught or learned, and plays fairly quickly. This is a great option that combines affordability with replayability, and is an easy addition to any game collection.

Guillotine is an excellent filler for a game night or family occasion. In under 5 minutes, this game is on the table and new players are prepped to play. Turns go quick, giving you just enough time to plan your next move without giving too much down time. These are really the main components of a great light game, which Guillotine delivers with ease. Personally, my favorite element of Guillotine is the theme found in all of the cards. Thinking about a line of French nobles tripping, kicking and shoving their way around this line is pretty hilarious. The card art and subtext really adds to this, telling a funny little story of how a particular noble ended with his head under your blade. Though a bit macabre, it can easily be embraced or ignored according to your preferences. Overall, Guillotine is an excellent option when looking for a more casual game to play over a few drinks or in between lengthier games.

This is a good starter game for any game night. It has a cool theme and very easy gameplay. There is also some good strategy involved when it comes to moving the line and messing up your opponents. I agree with Biff that the box could have been better. The artwork is decent, but nothing spectacular.  This game plays the best with about 4 people but still plays just as well with 2.

Guillotine is an excellent light game. It plays relatively quickly and is easy and fast to learn. I especially like the fact that it is broken into rounds (days of execution). I think that this helps to maintain the engagement of players who might not be doing as well as they’d hoped: players aren’t locked into a super-long game of being stuck with crappy cards. While it’s not the most beautiful art that I’ve ever seen in my life, the characters are fun. The mechanics of switching cards in the line-up is also good for shaking things up throughout the game, making play a little less predictable than just counting the cards in the order of play. Guillotine is always a solid choice for something quick and easy to break up a game night.

While well-executed, I can’t go ahead and give my full recommendation for Guillotine.