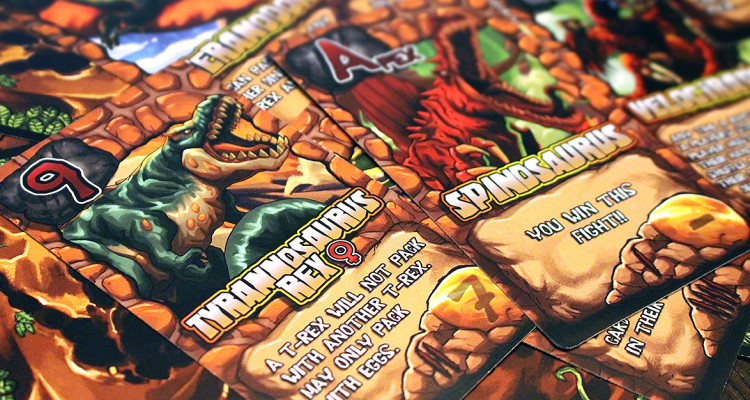 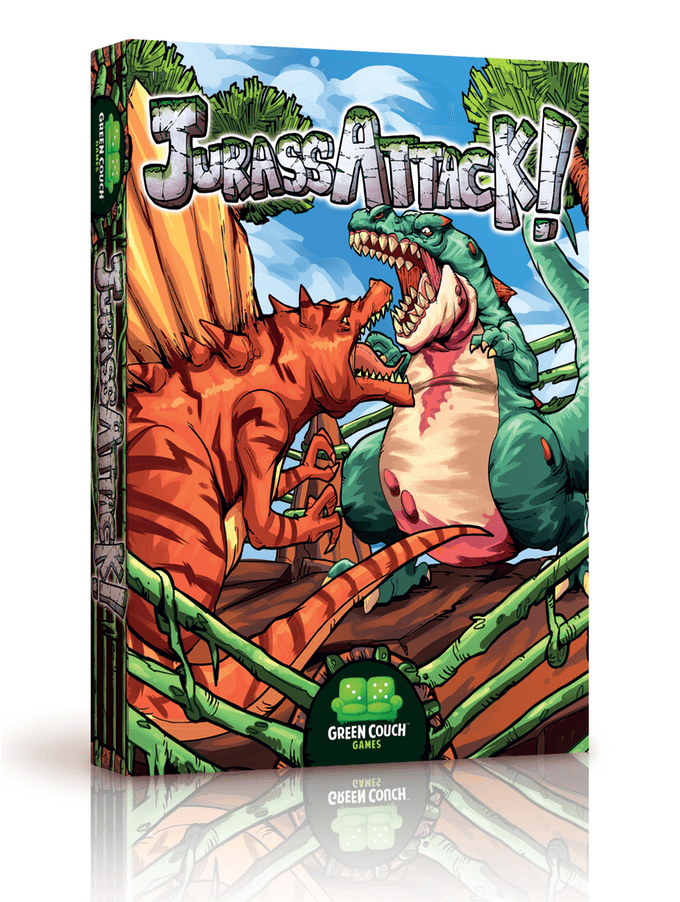 JurassAttack! is the latest offering from Green Couch Games. Created by first time designer Ryan Cowler, JurassAttack! pits two players against each other in a ferocious dinosaur duel to capture the most points.

The game contains two identical decks of cards featuring many iconic dinosaurs for you to play in battle:  Velociraptors, Sarcosuchus, Pteranodon, Dilophosaurus, Compsognathus (Compy), T-Rex and even the mighty Spinosaurus. Each dinosaur has its own attack value (Ferocity), point value and unique effect that contributes to the outcome of each battle.

The rules to JurassAttack! are simple. To play, you and your opponent draw five cards to form your opening hand. The first player (whoever won the last battle or whoever is playing the footprint deck at the start of the game) will start by selecting a dinosaur or pack of dinosaurs to play from their hand. In order to play a pack, you must play 2 or more dinosaurs of the same type, or join one with a dinosaur whose special effect allows them to be in a different pack. For example, since they are not of the same species, you could not play two Velociraptors in a pack along with a Compy. You could however, play the two Velociraptors together with an egg or a Pteranodon, whose unique effects allow them to form packs with other dinosaurs. 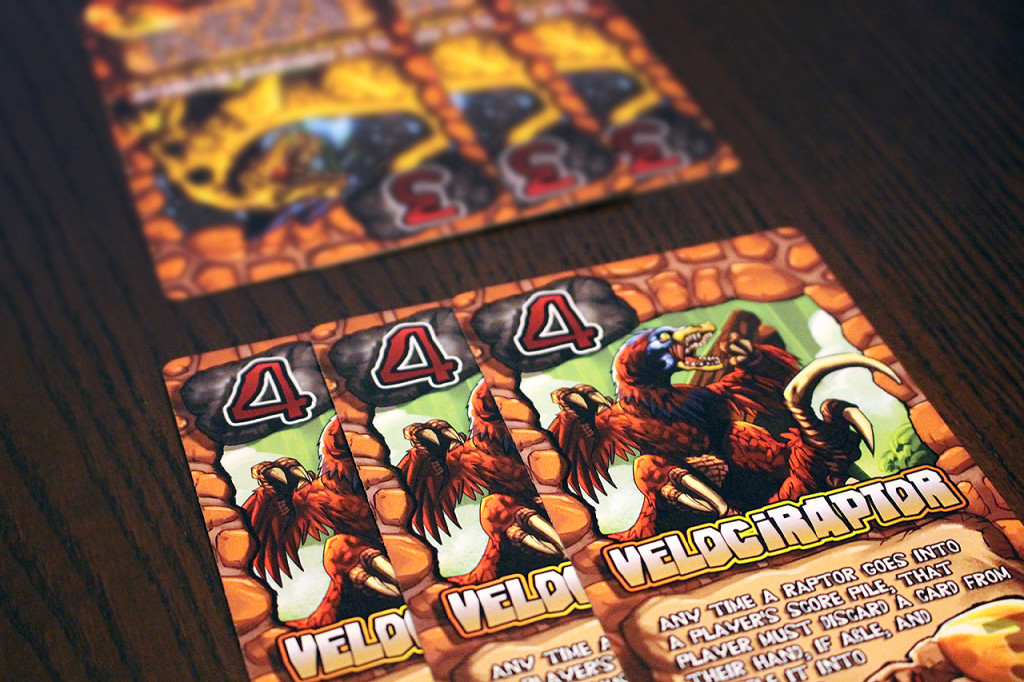 After the first player has laid their cards face down on the table, the second player will follow suit and decide on the beasts that they want to send to battle. The cards are then revealed and ferocity values calculated and compared. The unique effects of each dinosaur are also triggered at this time; these effects may have a bearing on the current duel or the one to follow. For example, a Compy’s Ferocity is calculated based on how many of them there are in the pack; Velociraptors force the winning player to discard a card; and the Spinosaurus wins the battle no matter what dinosaurs your opponent has fielded.

After the effects have been applied, the player with the highest ferocity wins this battle. The winning player scores his opponent’s pack and then discards his own (except for any eggs, which are added to their scoring pile). The losing player then draws back to five cards. The winner does not draw any cards unless they are left with an empty hand; in which case they must draw a single card. Play continues in this manner until one player has run out of cards. At this point, the game is over and the winner is the one with the heftier score pile!

JurassAttack! is a small box filler game that is accessible to players of all ages and experience. The rules are easy to grasp, allowing you to teach and play a game in under 15 minutes. On top of that, who doesn’t love dinosaurs? On the other hand, it being a 2-player game may hinder your ability to get this to the table as there are many other great filler games that accommodate more players (Camel Up, Machi Koro or even Green Couch Games’ own Fidelitas are fine examples).

With eight dinosaurs, there are a good mix of abilities between them to keep you and your opponents on their toes. The first few duels may be quite swingy in nature as you feel out what your opponent may or may not be holding. The ability to play packs of varying sizes and species also adds a small element of bluffing / deception to the game. The egg cards, while small in points, can provide a big boost to your options as they may be added alongside any dinosaur to give the impression of a larger pack or sacrificed alone to minimize the loss after seeing your opponent lay down a large pack of their own. Those looking to have a bit more “perfect information” may find themselves slightly frustrated as they attempt to count cards and determine the optimum move based on what forces they think their opponent still has available. The size of the deck (27 cards) makes this possible, but it’s not as simple as smaller duel games like Brave Rats, for instance. 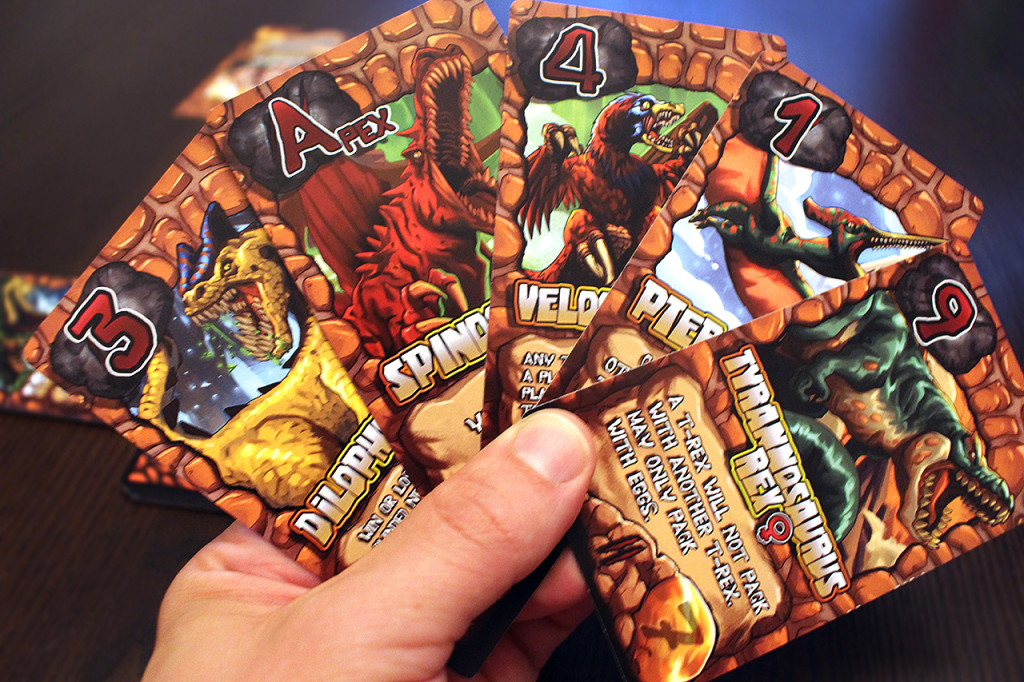 In addition to the creation/utilization of packs and combinations of unique effects, the rule that prevents the winner from drawing after a duel provides players another tactic to explore. This allows for the possibility of throwing a duel here and there to be a viable strategy in order to replenish your hand and come back strong in the next duel; hopefully forcing your opponent to waste his precious Spinosaurus in the process! Timing (and a little luck) is everything in this game, and you will definitely need repeated plays for the subtle interactions and tactics to reveal themselves. Luckily for you, the short play time will allow you to get in plenty of games before the next meteor hits the Earth!

JurassAttack! is yet another quick and clever filler game from Green Couch Games. In addition to the t-rexcellent game play, the great artwork and tarot sized cards bring a larger than life feel to this bite-sized dueling game. For only $10, be dino-sure to wrap your tiny little arms around this game before the campaign is extinct.

The League of Nonsensical Gamers would like to thank Green Couch Games for kindly providing us with a prototype of JurassAttack! for this preview.

JurassAttack! is currently funding over on Kickstarter. If this game tickles your fossil bone, head on over to the campaign page by July 26, 2015 to purchase your own copy. For $10 (plus shipping) you will receive a full copy of the game and any stretch goals that have been reached.