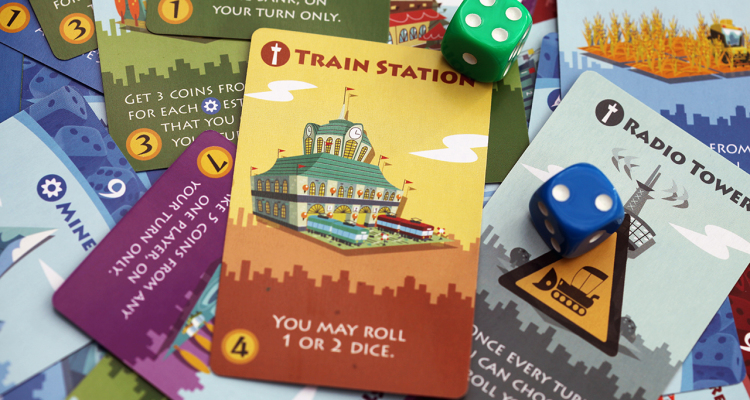 Welcome to the city of Machi Koro! It may not look like much – just a wheat field and the neighborhood bakery – but, as the newly elected mayor, it’s your job to develop the town into a thriving success. To get there, though, it will take some savvy investments, a bit of luck, and…maybe a few cheese factories.

It’s hard to pass over Machi Koro while scanning the shelves of your local game store; the vibrant color palette and design are simplistic and endearing, making the game a standout while resting among other titles. Upon closer inspection, the low price point, short playing time and “city-building meets dice-rolling” description make you consider it all the more. On the other hand, how does it hold up on the tabletop?

Mechanically, it’s fair to say that Machi Koro is streamlined almost to the point of being transparent. The four-page rulebook is rife with helpful diagrams and figures, but could in reality be summed into a few short sentences: “On your turn: Roll dice. Collect money. Buy an establishment or landmark. The first to build all four landmarks wins.” This actually fits Machi Koro perfectly, though, as these very simple options make the game quick and approachable – exactly what it seeks to be. Fans of Settlers of Catan will feel right at home, as the collection of money is based on the roll of the dice, much like resource collection is in Catan. Each establishment has a corresponding value and one of four colors – blue, green, red, or purple – which will dictate whether money is collected on your turn or an opponent’s. It’s this small element that makes Machi Koro a step beyond a simple dice-chucker.

What seems like a very shallow game on the surface actually offers a bit more than first impressions may reveal. The interesting decisions that can be made between the range of establishments, their particular money-gaining MO, and the four landmark cards, add both breadth and depth. Take, for instance, the simple choice of specialization versus diversification. The former offers you a chance to gain large sums of money at once, whenever a particular die-value is rolled. This can be great for setting up a big turn for yourself in one swoop, or for when the dice seem to be hot for a particular number. The latter; however, offers more security in playing the probabilities. A wider range of values means more chances to hit, although some buildings (the green establishments) will only benefit you on your turn, while the red establishments are only profitable on other player’s turns. The clever distribution of values and abilities gives you some nice options to consider. 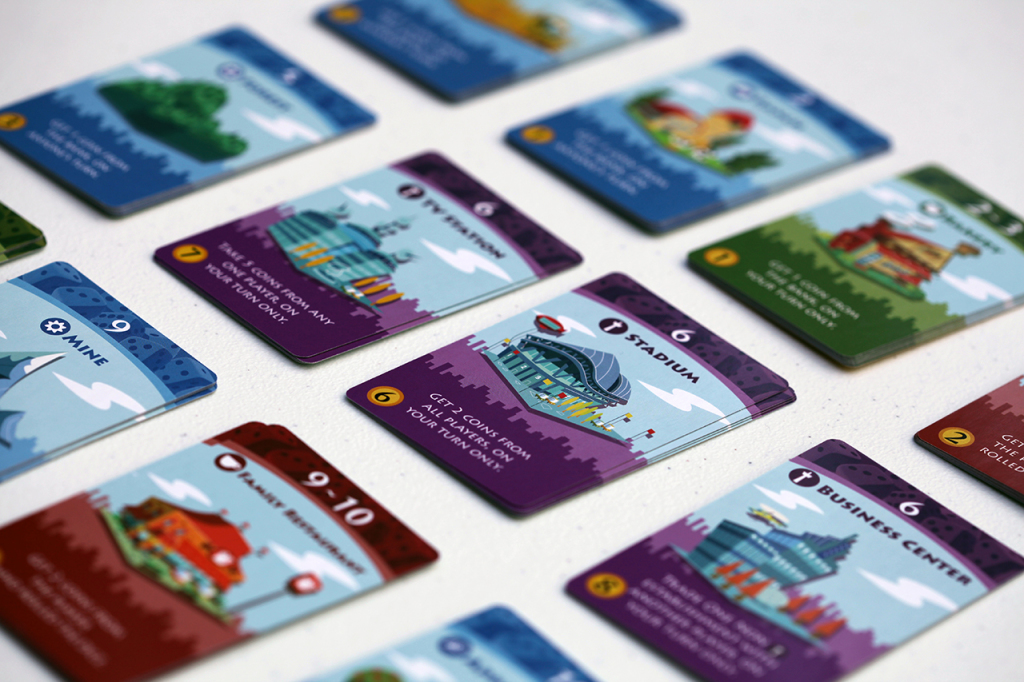 The human element is also heavily present in Machi Koro, as buildings have you stealing from your opponent’s coffers or even allow you to swap that establishment you mistakenly bought three turns ago for the much more valuable one your opponent just purchased. It’s here that Machi Koro can start to show cracks in the shell,  as player skill and play style can clash to the detriment of the game. Our plays have revealed that all of the players at the table need to be on the same page. Casual players may find that their more strategically apt opponents take a commanding lead, while more passive players can become frustrated when their banked cash is drained by the more “take-that” players who have bought heavily into the red establishments. Even beyond that, this is a dice-game at its heart, meaning a hot streak for one player is often a debilitating advantage against another.

The success or failure of Machi Koro really depends on your expectations of a game of this design. In terms of strategy, it is more wide than it is deep, meaning gamers looking to explore across several game plays could be disappointed. Those looking for a lighter game to fill their time may be impressed with the options available, and find it a refreshing choice over some of the other games in their “30 minutes or less” pile. Overall, we have found it to be a flexible option, one that can suit both casual and serious game players, though it does have limited movement along that spectrum. If dice-rolling and player interaction are what you look for in your games, Machi Koro may just be an excellent addition to your shelf. Also, be on the lookout for two expansions to add into your base game before the end of 2014. These may provide the additional complexity that some players are seeking, without overwhelming others. 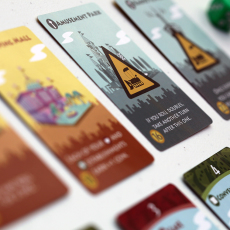 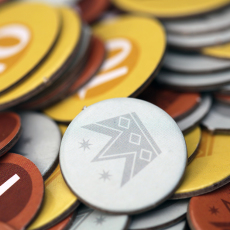 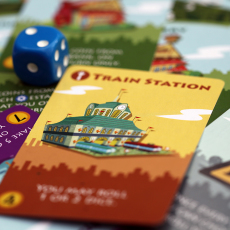 What surprises me most about Machi Koro is how effectively it draws people in.  The colorful, uncomplicated look is so inviting! Top that off with a rule set so simple you can teach in less than a  minute, and this makes for a near perfect gateway game.  The game has been a huge hit with my middle school board game club as well as with a few self-described “hardcore gamers” in my regular group.  This speaks to the universal appeal of rolling D6’s and the purity of the design.  Machi Koro may become my go-to game for bringing friends and family into this hobby.  As for me, I’m not dying to get it back on the table as much as I  was seven plays ago, but I am itching for new cards and more strategies to explore!   The expansions will be an insta-buy and I look forward to seeing how they change things up.

Machi Koro is an ideal gateway game for players looking to bring their non-gamer friends and families into the obsession…err, I mean hobby.  The cheerful cartoon artwork immediately draws you in and the simplicity of the mechanics will keep you coming back for more.

As with most dice games, Machi Koro provides some exciting moments of sheer bliss, when a well planned combo triggers, or monumental let down, when you continually roll those few numbers you have not accounted for in your city. The randomness of the die roll is cleverly mitigated using a series of buildings and powers, giving players a variety of avenues to explore in their pursuit of tiny city building perfection.

While definitely geared towards a more casual gamer profile, toying with the building probabilities and combo potential will grant hardcore/strategic gamers some reprieve when asked to sit down and play. As one of these more strategic gamers, I did find that, after a number of plays, the base game began to feel stale and in need of an expansion to expand upon the options available.

All-in-all, I would highly recommend Machi Koro to casual gamers seeking a light, streamlined city builder reminiscent of Settlers of Catan. For the more hardcore/strategic gamers, I would seriously consider trying before you buy as the allure wears thin quickly and you’ll find yourself wanting to feed wooden farm families before long.

Machi Koro has been on my radar ever since I saw a review for it a few months ago. It was an instant-buy, once my shop received a copy, knowing that my gaming group enjoys small games that are easy to both learn and play. This game is simply an introductory game with very straightforward mechanics. A “roll-and-see-what-happens” game with a small bit of strategy thrown in for good measure. You can easily get this one to the table and, before you know it, you’ll have a good two or three games under your belt.

The game does, however, get stale rather quickly once you find a strategy that works for you. You may end up relying on that strategy each time and essentially end up playing the same game over and over. The release of the upcoming expansions should help randomize the pool of buildings and will hopefully breathe life into this very fun, albeit short, game.

So, I suppose that I get to be the dissenting opinion on this one – and I also freely admit that this is only after giving the game one play.

I hated it. Immensely.

If I have one peeve about games, and how they play… it’s that I absolutely detest being unable to take any action, or find myself prevented from making any headway, especially when that block is random. On the other hand, for example, I can live with Catan, given that all of the resource locations will activate when the number is hit, no matter the player’s turn. In Machi Koro, however, the combination of whose turn it is versus what number gets rolled versus the dreaded red cards made for an exceptionally frustrating experience. For example, I was trying to play wide, where most rolls would give me *something*, but there was perhaps a six turn run where I could do nothing as I would either roll to no effect, and not be able to afford anything, or all of my coins would be stolen by opponents before I could make a purchase.

Machi Koro might be for you, and that’s cool, but it’s not for me.