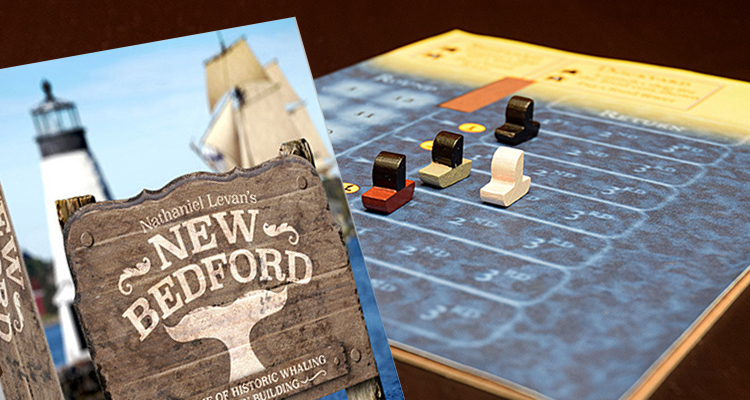 In the 1800s, New Bedford, Massachusetts evolved from a small fishing and farming village into one of the most important whaling and foreign trade ports in the world. Transported back to the early beginnings, it is your job to expand upon the humble town center and develop New Bedford into one of the 19th century’s most influential cities. 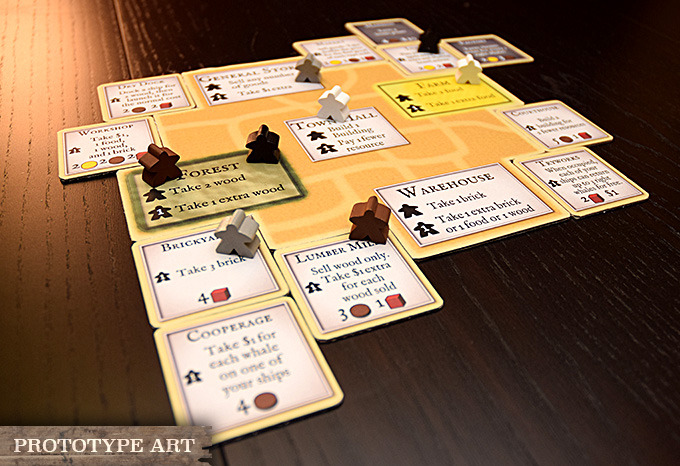 In New Bedford each player has two workers and two ships with which to construct the town and set sail for personal fortune and glory over the course of 12 rounds. Rounds are broken down into 3 phases: Action, Movement and Whaling. In the Action phase, you will take turns placing workers throughout the town to acquire goods, sell goods, construct/use buildings and launch your whaling vessels. Scarcity of action spaces is less of an issue in New Bedford as all spaces on the town board may be occupied by multiple players. However, being the first to utilize a space provides a significant bonus, requiring players to efficiently prioritize their limited workers to maximize their return. Buildings constructed by each player not only score you points at the end of the game, but also expand the town and provide additional action spaces that you can use going forward; even your friends can use your buildings for a small fee. There is a concern that the replayability could be limited by having all of the buildings available in each game, leading to dominant strategies and giving experienced players a strong advantage. In our plays, no two towns were the same. The ultimate strategy lies in how you tactically combine your limited workers, resources and available buildings. For what it’s worth, I think there is more than enough in these seas to explore.

The Movement and Whaling Phases transfer the focus out onto the open seas (the Whaling Board). Ships out at sea move one space closer to returning to port to cash in on their haul. Each of the three types of whales (Right, Bowhead, Sperm) have an associated victory point value which will be collected when a ship returns home. Whaling early and often is a viable strategy to explore, but be mindful that each whale also has a cost (“lay”) associated with it and your crew won’t let you off the hook for their hard work. If you are unable to pay the lay for your whale(s) when your ship reaches port, they will be sold to the other players, making the number and cost of the whales you collect, important factors to consider when your natural instinct is to whale to your heart’s content.

During the Whaling Phase, whales equal to the number of players plus one are pulled from the bag and drafted based on how far out to sea your ships are on the Whaling Board; the farthest out goes first followed by the other ships in order. Yes, the whales are drawn at random, but the randomness of the whaling action is mitigated by the ability to place your ship in an optimum spot on the board to obtain your first choice. Whaling is the crux of the game and lends a welcome amount of tension to the game play, as everyone huddles around the bag while the whales are drawn. The contents of the whaling bag are fixed each game based on player count so the more you whale, the greater the probability that future trips will be less fruitful. At the end of 12 rounds, buildings, whales and money are tallied and the player with the most victory points is the winner. 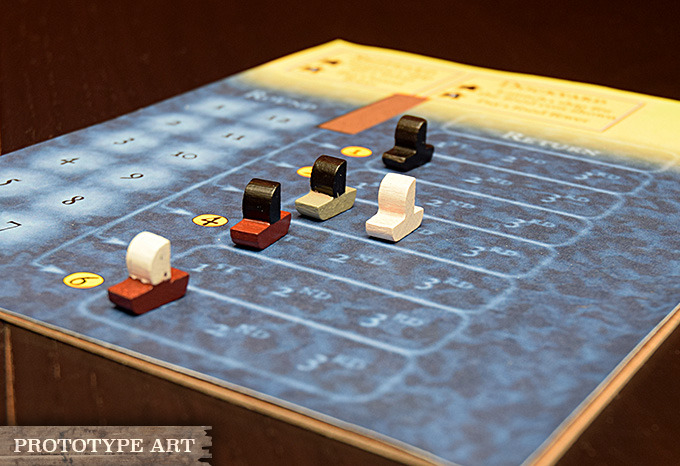 The whaling in New Bedford could be considered “controversial” by some. While I do not condone the practice, I think it would be unwise of you to dismiss this game without appreciating the subject matter portrayed for what it is: history. There is no political statement being made here;  it is simply a game set in a period of our country’s history that, regardless of what your current beliefs are, was crucial to its growth and development. If you can accept that, you will be rewarded with a rich, thematic eurogame experience waiting at the dock. The ease with which the game can be taught and grasped by gamers of all skill levels is a testament to its elegance. The mechanics, while easily recognizable, are refined to the point that they provide a streamlined experience with enough intuitive twists to differentiate New Bedford from other mid-weight euro games.

Some have deemed this “Le Havre Lite.” I personally enjoy this game more than Le Havre! Sure, there are some similarities: the shipping theme, tight resource management and the purchase/use of buildings to further your engine efficiency. Yet, with New Bedford you get a smoother integration of familiar mechanics. The ease with which this game can be setup, explained and played makes it accessible to just about anyone. The games I’ve played have all been extremely close; there was never a point in any game where I felt that my proverbial ship had sailed. This speaks volumes to the solid design and development of the game.  Overall, I would highly recommend New Bedford as a worthy addition to your growing collection. It’s a whale of a good time! (You didn’t think I’d really go a whole preview without a whale pun, did you?!)

Very few games find the perfect blend between familiar mechanisms and fresh design, but New Bedford does exactly that!  The worker placement and city building will have most folks feeling right at home, while the whaling mechanism provides a new way to consider resource management. I love how the timing and risk/reward aspects are so beautifully integrated into the theme of the game. The way you plan each expedition by gathering wood to prepare your ship and stockpiling food to feed your crew is intuitive and easy to teach to players at any level. With play time sitting just above the hour mark, I know it will hit my table often!

The League of Nonsensical Gamers would like to thank Dice Hate Me Games for kindly providing us with a prototype of New Bedford for this preview.

New Bedford is currently funding over on Kickstarter. If this game piques your interests, sail on over to the campaign page by August 14, 2015 to purchase your own copy. For $29 (plus shipping, you receive a copy of the game along with all reached stretch goals.