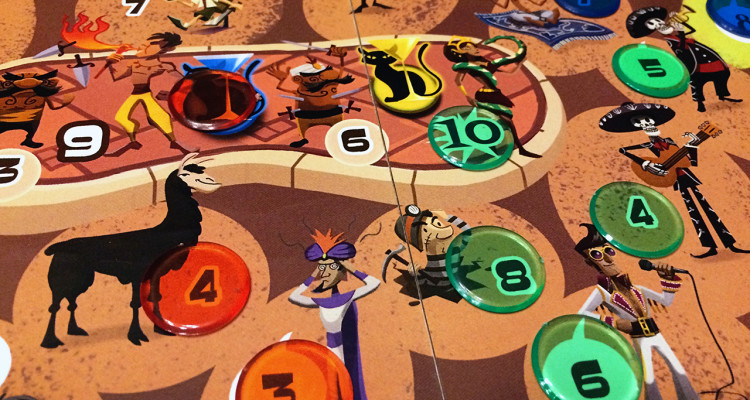 Swinging Jivecat Voodoo Lounge, by Seth Robeck, is a wild trip back to 1950’s cocktail culture in which you and up to 4 of your most popular friends take on the role of voodoo spirits wielding their mystical power to influence all the hipsters and jivecats to join their social cliques. Sound unique? Believe me, it is! As a socially inept gamer, I would normally shy away from any game simulating a party, but this weird, groovy game really caught my attention and I just couldn’t resist! 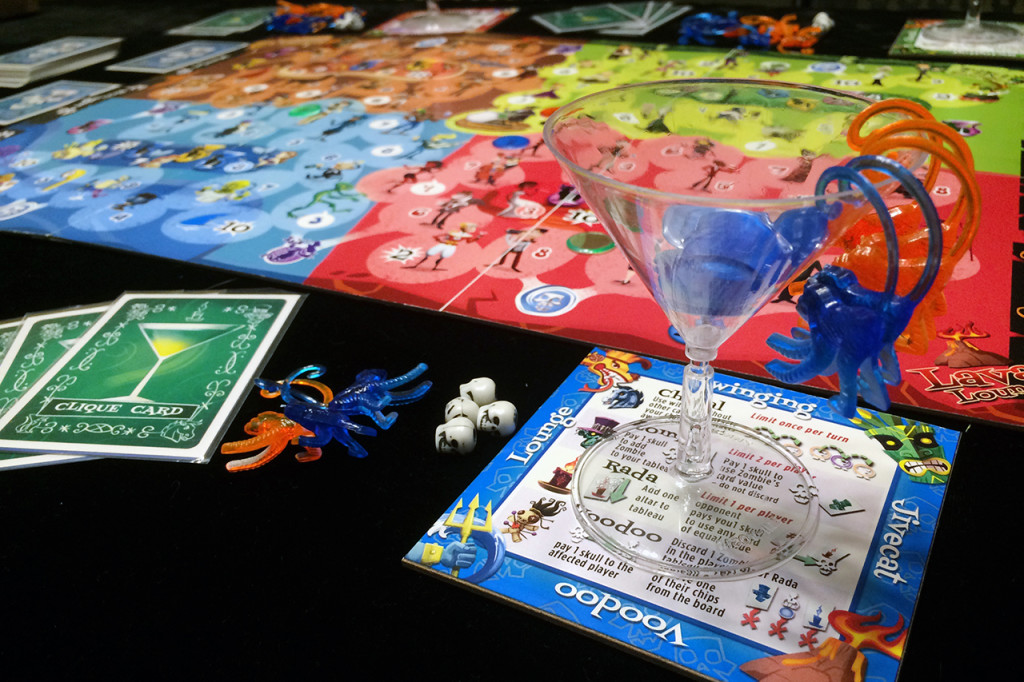 Let’s start with the obvious thing: visual appeal. Sergi Marcet is clearly a talented artist. He did a wonderful job capturing dozens of unique characters with slick, cartoon depictions. I think you can actually hear the clamor of conversation and clinking glasses when looking at this board. It’s a busy aesthetic, but after all, it’s supposed to be a party! On top of the striking illustrations, you have exceptional components. Swinging Jivecat Voodoo Lounge might be one of the first games ever to feature mini martini glasses, but if it’s not, it has to be the first to feature cocktail monkeys. These components are fantastic for conveying the theme and catching the eye, but at the same time are a somewhat practical solution to storing your player pieces and keeping score. Regardless, the bottom line is that no one will be able to walk past your table when you are playing this game!

How exactly do you get to hang those cheeky monkeys from your tiny glass? By befriending Jivecats, of course! The crux of the gameplay is area control. The board represents four different colored lounges (Cocoa, Tiki, Neptune, and Lava), containing a gaggle of numbered contacts. Some of these contacts are Low Brow, some are Hipsters, and some are the coveted Jivecats. Your mission is to expand your clique out by placing your chips, gradually working your way up to reach the coolest guests at the party. You do this by playing Clique cards. Each Clique card has three uses; one of which is as an actual cocktail recipe, a nice touch that adds to the whimsical feel of the game. In game, the Clique cards can be used to gain contacts by playing a series of cards that total the specific number of a contact on the board through a combination of addition and subtraction. For example, I could play a seven, a four, and a three (7-4+3) to place my chip on a contact with the number six. You can play as many of these cards as you want to build up your clique. I love this mechanism because you really have to think in order to maximize the effectiveness of your hand of four cards. 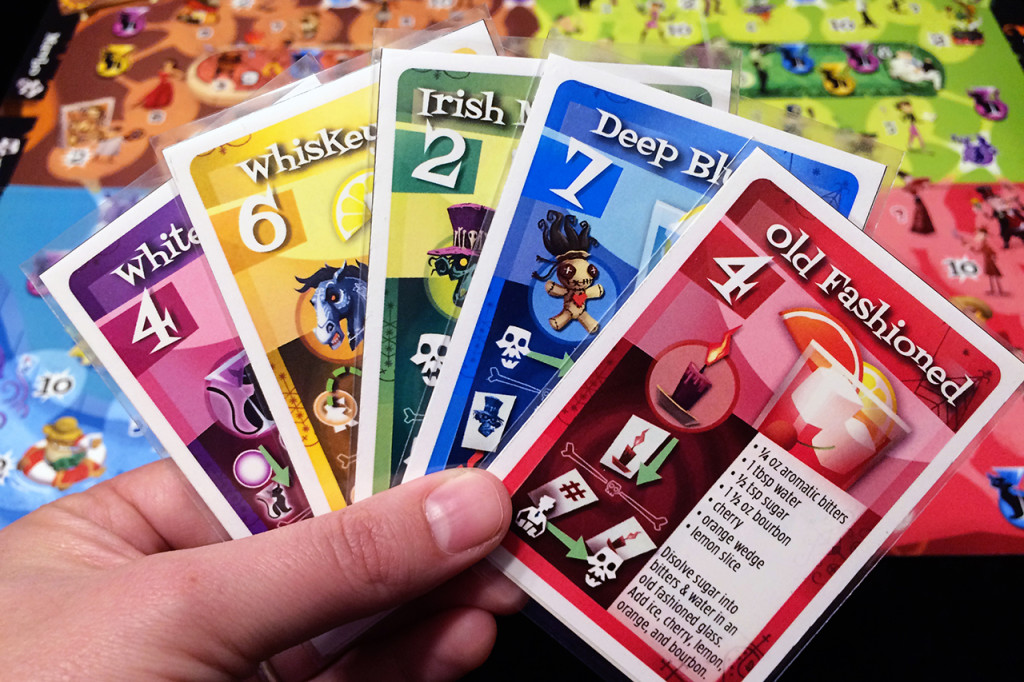 The Clique cards can also be used as spells. There are five types of spells: Zombie, Rada, Voodoo, Cheval, and Jivecat. Rada and Voodoo spells allow you to interfere with your opponents’ designs by making them lose contacts or resources. Zombie spells provide you with ways to extend your hand of cards by activating cards in your tableau and Cheval spells allow you to move existing contacts on the board. Some of the spells require Skull Tokens to cast or activate. Everyone starts with three Skull Tokens, but can gain more by placing chips on specific numbered and colored contacts, as indicated by the track of Skull cards that sits on the left side of the board. Claiming a Skull card can earn you one, two, or three skulls depending on where it is on the track. You don’t pay skulls to cast the all-important Jivecat Spell, you pay in friends. That’s right, you have to dump two of your Contacts in order to get chummy with an ultra-cool Jivecat.  Dumping Low Brow or Hipster Contacts gives you two monkeys, dumping Jivecats gives you three. It takes sacrifice to make your way to the top!

Adding Jivecats to your clique isn’t the only way to gain points. Keeping up with the Trend cards can get you monkeys and even more. This track of cards on the right side of the board requires different configurations of chips on the board in order to claim them. For example, the Salty Dog requires the player to have five or more chips in the Neptune Lounge. Once a Trend card is claimed, the player will receive points according to where the card was on the track. Passe Trends get one point, Vogue and Retro Trends get two. In addition to the points, the player takes the Trend card into their tableau and are then allowed to use its special power once per turn (as long as their clique matches the pattern depicted on the card). These powers can be very strong and sometimes require Skull Tokens to activate, so it is a tricky business to balance your need to earn points versus the usefulness of gaining Skull Tokens. If you’re falling behind, it might be worth it to strategically place a contact to earn some skulls, activate powers, and cast spells that slow down your competition. If ever a player moves or removes chips and can no longer meet the requirement of their Trend card, it becomes inactive and its power cannot be used. This can be very important for end game, as each active Trend card is worth one bonus point and that point might make the difference between winning and losing. The first player to get to 15 points triggers the final round of play and the player with the most points wins in the end. 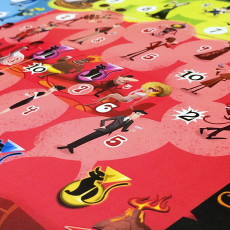 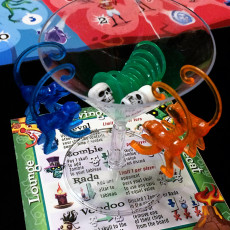 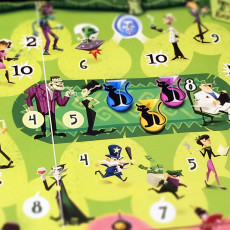 At times Swinging Jivecat Voodoo Lounge can feel like Mad Men, crossed with Mario Kart. It’s imperative to keep an eye on your opponents and your position is never more precarious then when you’re at the top! Becoming a target is easy, especially if you have a group inclined to confrontational play. That being said, there is a so much to do in the game, it is entirely possible to avoid “take that” if the rest of the group gets engrossed in furthering their own causes. I enjoyed the swift pacing and tight end game scores, but if you’re not alert, the final round can sneak up pretty fast. Most games ended around the 45-60 minute mark, regardless of player count. Even with a mixture of experienced and inexperienced players, scores tend to be close with tie breakers being used, as necessary.

Swinging Jivecat Voodoo Lounge stands apart from most games because it contains several mechanisms that aren’t often combined (area control, network building, hand management, pattern building). Because of this unique blend of mechanics, it can be a lot to take in for a new player. Luckily most of the decision making is tactical; based on the available cards and the limited number of combinations you can create with them. The game clicks after a round or two and becomes addictive. Nearly every group I tried it with has wanted to play again immediately after their first play. Managing your resources and timing your strategy to play out before someone ends the game can take some practice, but it’s the type of practice you’ll actually take pleasure in doing! This game falls into a perfect medium weight category that makes multiple plays in a single session possible. It’s easy enough to teach and play in an hour -maybe slightly more- but the mathiness and intertwined mechanisms give your brain a good stretch. That’s what makes Swinging Jivecat Voodoo Lounge so fantastic! It takes an off-beat theme, jazzes it up with some ridiculously fun components, and tops it all off with engaging mechanisms that come together in an unexpected way, like an expertly mixed cocktail. Now I’ll drink to that!

Being the sucker for quirky themes that I am, it was love at sight when I came across images of the Swinging Jivecat Voodoo Lounge prototype back in 2012 and it has only gotten better since then! The artwork is flamboyant and the components practically jump off of the table. Ultimately, the game itself is an abstract-style game, but it is so utterly saturated with kitschy voodoo tiki cats that it doesn’t feel abstract. It still requires the clever tactics of an abstract game, but avoids the bland trappings those types of games tend toward. I enjoy how the board is constantly changing as you and your opponents contend for superior social status. The take that is not overly vicious -you’re not going to lose your real life friends playing this game- but it does keep things exciting. There’s always something to be thinking about or reacting to; never a dull moment! I’d be remiss in not mentioning the rulebook, which I found to be well thought out and easy to teach from. All in all, this inaugural game from David Mackenzie’s Game Designers Clubhouse is top notch. I believe I’ve exhausted my thesaurus’ synonyms for ‘unique’ in writing this review! It is a rare thing for me to play a game for which I can’t find a good comparison and I think that’s why I’m so excited for Swinging Jivecat Voodoo Lounge. I keep having to remind myself that this is just the prototype. With all of the stretch goals from the Kickstarter page, the final production is sure to be out of this world!

The League of Nonsensical Gamers would like to thank Game Designers Clubhouse for kindly providing us with a prototype of Swinging Jivecat Voodoo Lounge for this preview.

Swinging Jivecat Voodoo Lounge is currently funding over on Kickstarter. If this game piques your interests, slide on over to the campaign page by February 5, 2015 to purchase your own copy. For $50, you receive a copy of the game along with all reached stretch goals.