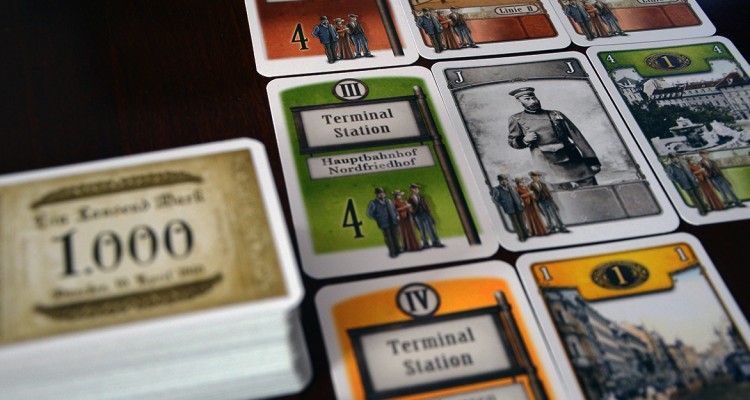 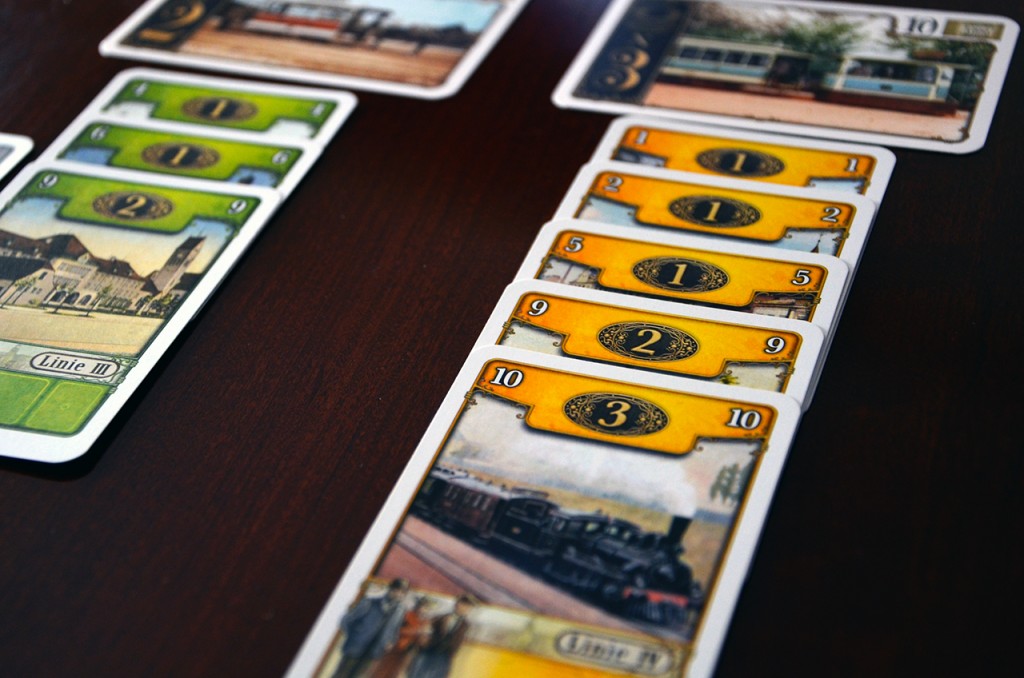 Trambahn is a two-player card game that will have you collecting cards of different colors to build and expand your routes. You and your opponent will also need to invest in a steadily modernizing series of trains to power and link these routes together. Passengers will simultaneously be flooding the stations of their corresponding color, and when the station fills, the passengers will embark onto your routes of the same color. This triggers a scoring round (called a ‘tour’), in which each player tallies those routes. Once 10 tours have been scored the game will end and the player with the most points is the victor. Doesn’t this theme just shout out FUN!? Once you get past the very dry sounding theme, you will quickly realize that you have a seriously fun, back-stabby game on your hands.

At the start of the game, four terminal cards will be placed in between the two players and the train cards are sorted by value. Players then receive their starting hand, as well as a starting income. One of the most clever things about Trambahn is that the reverse side of the cards depicts the value of 1,000 marks. You will essentially be using any unplayed cards as income, and your discard pile as your cash reserves. This eliminates the need for extra components such as coins or the dreaded scourge of paper money. 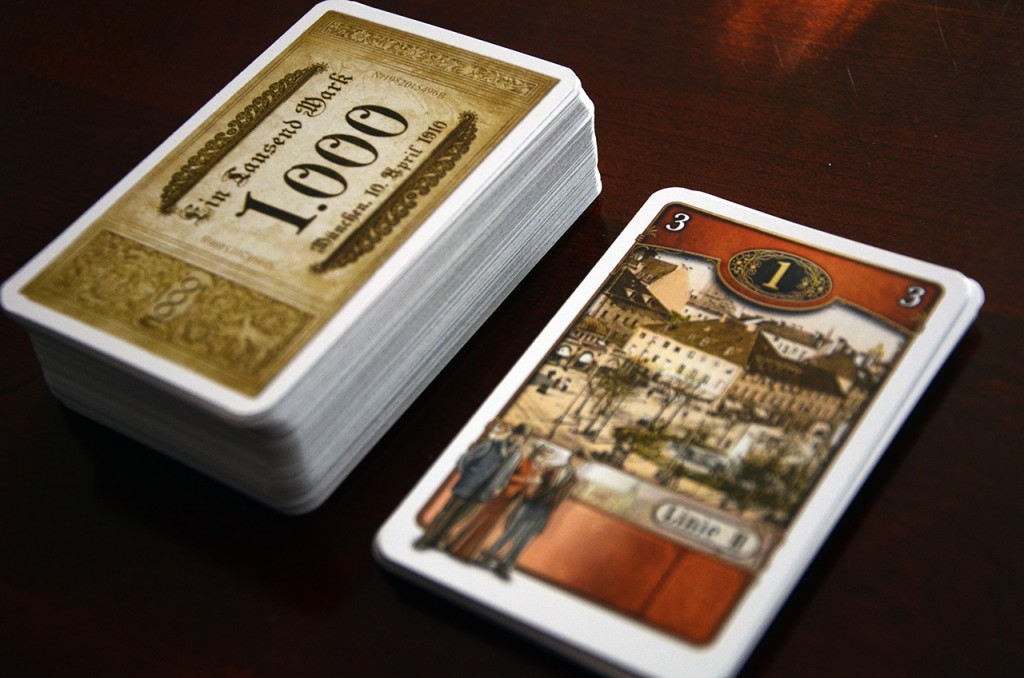 On your turn, you must place one to two cards from your hand into line next to the corresponding terminal station cards; these represent the passengers’ demand for that particular color. Once a station hits four passengers, that railway will then immediately score for both players. This portion is huge when it comes to strategy, and timing is the key when it comes to stretching out the period between scoring phases. A skilled player can easily try to manipulate their opponents reactions to plays made in this phase. After passengers are placed, you may then begin adding to existing routes, or build a completely new one. Routes must be formed by cards in ascending order and by color, placed in front of you in a column. Routes may consist of only a single card, or may be formed from multiple cards as long as they are placed in order. For example, if you have played a red four, five and seven, you will have a route three cards long, but keep in mind that you will not be able to fill in the missing six later on. Here again, the need for calculated timing rears its ugly head. Do you hold out for that six, or do you get that route down on the table now, before your opponent beats you to cashing in on the reds? If you hold out and can complete a route with eight or more cards, you can immediately score it as a bonus tour.

After building a new route, you must then purchase a tramway (train) card; one is required for every route that you construct, and they act as a multiplier to the points scored for the value of the route. The cost for one at the beginning of the game is relatively cheap, only putting you back 5,000 marks, but it also grants the lowest multiplier at just 2x the route value. As the game progresses and more routes are built, the tramways will increase in cost as well as multiplier values. Your turn ends when you are finished with these phases, and you then have the opportunity to discard cards from your hand before drawing back up to six. Discarding cards is the only way to generate the cash needed to purchase new tramways, so you may find yourself caught between holding potential routes, and cycling your hand for cash. Play proceeds back and forth in this fashion until the tenth tour is scored.

Don’t Miss the Next Train

Trambahn offers a great head-to-head, cutthroat experience between two players. You may find the theme and art to be less than exciting, depending on your tastes, while the gameplay turns out to be anything but. Playing this game with my wife takes me back to those late night 500 rummy days, where I get the evil eye just as I’m about to pick up a pile from the discard to make an epic ten card meld. Pulling off a route without any gaps in the order is extremely satisfying, but at the same time SO HARD! Throughout the entire game you find yourself in this timing predicament, and it all hinges on how the other player will react. Holding out for that blue five that you know for sure that you will draw the next round, only to find out that you held out one turn too long and your opponent beat you to the punch is the ultimate in frustration. 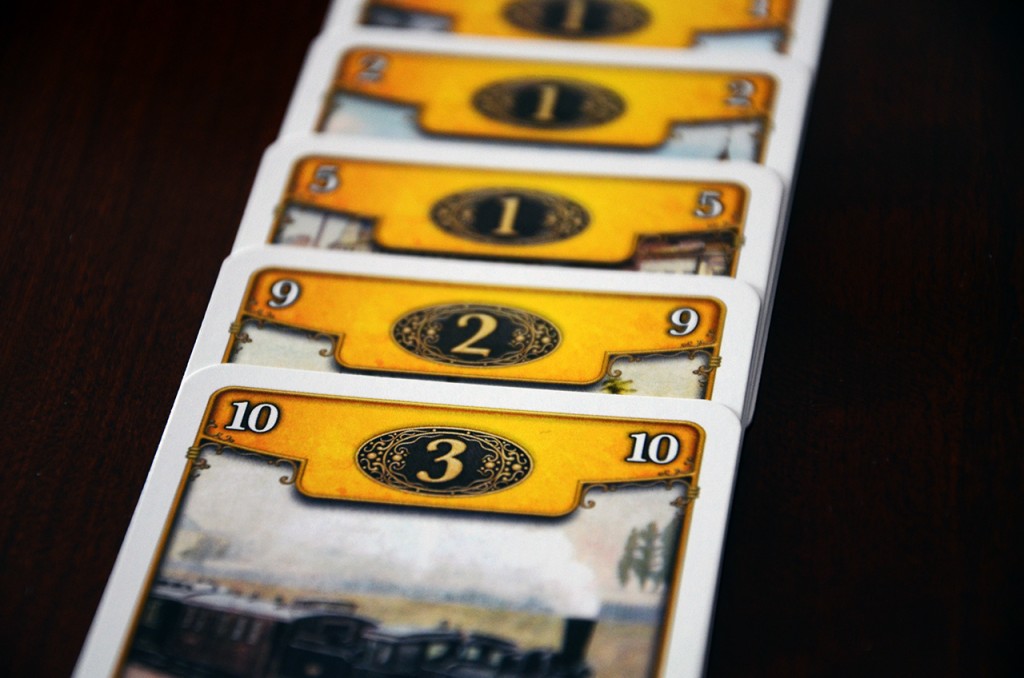 I highly enjoy any time I get to play this game, although it can, at times, feel a little mean and back-stabby. Being fast-paced, Alicia and I can play multiple games in one sitting without taking up the entire night. When your opponent is your wife, you may find yourself a little reluctant to steal that last cheap train card or score a bunch of reds while she is working on yellow. Watching her give you those sad eyes and saying “Oh man!” as you write a zero in her column can almost bring a sad tear to your eye… almost. Playing against Matt or Dan on the other hand, screw those guys, I’m scoring the reds!

I picked up Trambahn on some cursory information about the designer and the gameplay, but mostly it was because it had gathered buzz for being a great 2-player game. That immediately draws my attention and the $20 price tag made it an easy venture. In the moment, while playing Trambahn, I have such mixed feelings. Card draw can be random and two evenly matched players can bring forth the potential luck element in the game. But at the same time, working hard to manage your hand, making the tough decisions on what to sacrifice and what to go for, and the constant jockeying for better scoring position is so engaging and enjoyable. Not to mention the simple fact that there are 10 variable scoring rounds is an operant conditioning wonder. You will easily be sucked in and want to play again and again. This is an easy addition to any shelf if you’re a fan of thinky, quick two-player games.

Trambahn is another excellent title in the Lookout 2 player series. This small-footprint card game takes the familiar sequential card stacking mechanic (reminiscent of the classic Lost Cities) and builds upon it with multi purpose cards and an opportunistic scoring mechanism. There are times when the luck of the draw will highly influence your play, good or bad, but the decision making throughout is tight and enjoyable. The game also builds in mitigation options through its multi purpose cards (playing a card as a passenger, train route or money) and timely discarding.

My favorite element of the game is the scoring mechanism which offers you a number of different strategies to pursue both in how you build your routes (multipliers, length of route, etc.) and when to score them. This works beautifully in the 2 player format allowing for a tense exchange back and forth. If you’re looking for a fast playing filler with quality and depth to add to your collection, I’d recommend you hop on board.