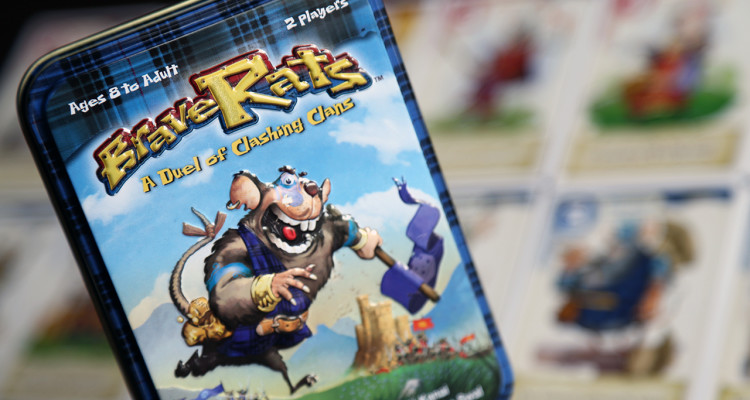 No Comments
9939 Views
Game Reviews, Review
Dan H. (Nad)
Designer: Seiji Kanai | Artists: Noboru Sugiura & Christophe Swal | Publisher: Blue Orange Games, 2014
Players: 2 | Playing time: 5 mins
The Rat King has suddenly passed away, leaving no successor to the throne, and the country is in an uproar. Two princes have stepped forward to claim succession. Both of whom have gathered their allies, all with their own unique powers, and are ready to do battle. Take on the role of the wild-natured Red Prince or the calm and composed Blue Prince. Defeat the opposing prince and his forces and the throne will be yours! There are no rules in the Game of Thrones, even for rats!

BraveRats is a 2-player simultaneous action-selection micro game from Blue Orange Games and designer Seiji Kanai, the creative mind behind such hits as Love Letter, Cheaty Mages and Chronicle. Based off Kanai’s original release R, BraveRats pits players against each other in a quick battle of wits; each player utilizing the same eight cards to lay claim to the throne. Oh and they’ve added rats. 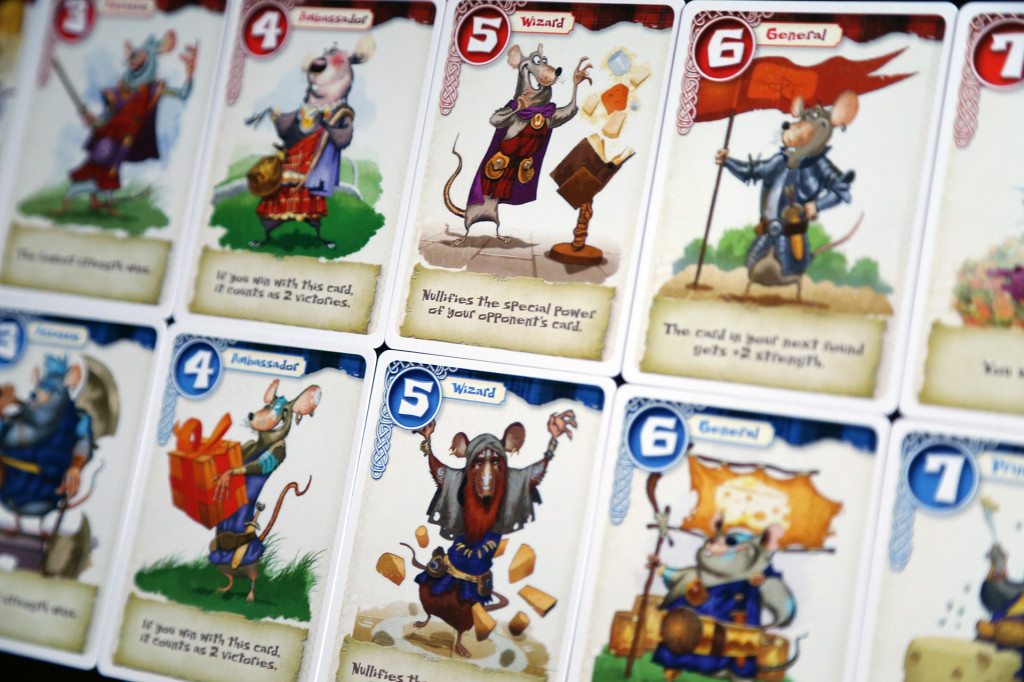 Aesthetically, this game is a delight. Thankfully, players are treated to two differing clan sets of seven charmingly-rendered cartoon rats each. The characters are lively and animated, bringing an energy to the cards rather than a more static portraiture.  While the art is a joy to look at, that gaze won’t last long as the game moves along quite quickly and cards are mostly played face down. The 16 cards are packaged in a portable-sized tin that is slightly larger than a typical poker tuck-box. The slight increase in size is due to a rather posh, velvety inlay for your rats to rest before the battle. I, personally, inserted the cards in the same sleeves as my copy of Love Letter. Two Kanai’s for the price of one!

Each player selects a color and is given an identical hand of eight cards numbered zero through seven. Each round, players will select one card from their hand and place it face-down on the table in front of them. The selected cards are revealed simultaneously and the player with the highest number wins the round. But, this is a Kanai design so…where’s the catch? Each of the cards has a special mandatory power that triggers when played.

The powers are as follows:

Note: There are a few interactions that “break” the rules (i.e. The Prince trumps the Assassin). Each scenario, and result, in the game is nicely laid out on a card that comes with the game to assist in those moments of confusion.

If the two players reveal cards of equal value, or the Musician is played, first congratulate yourself for being able to read minds and then put the round on hold. Rounds put on hold are set aside and the winner of the next round will score the current round as well as the previous round(s) on hold. Multiple rounds can be put on hold making the next round even more crucial for victory. Winning rounds are set to the side and kept face-up (if they won the round) or remain face-down (if they lost the round). Play continues until one player wins 4 rounds; that person as you may have guessed is the winner of the game and the rat throne. 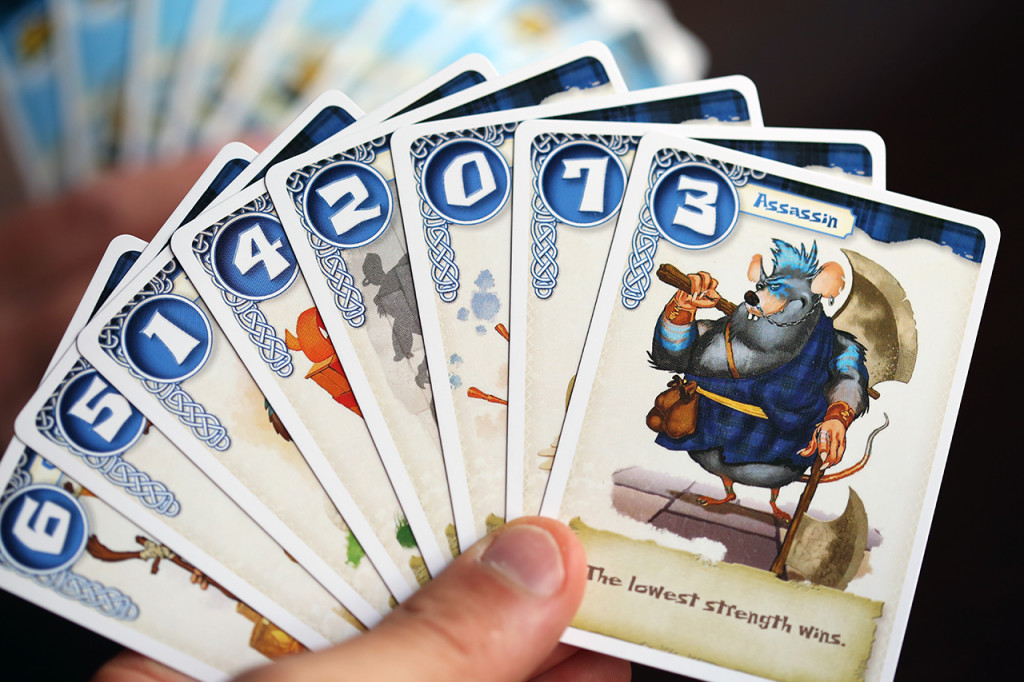 There are seven official game variants that come in the rulebook to mix things up:

Kanai’s original release, R, had a most refreshing quote within its rulebook:

“As you may note by the play time, this is not a long strategic game in which you think carefully each round. Use it as a way to decide game order, or instead of rock paper scissors.”

As the quote alludes, this game does not pretend to be anything more than it is. Much like Kanai’s other designs, if I were to describe BraveRats in three words or less I would say “simple, short, clever.”

BraveRats reminds me of a more advanced version of the card game War, with the card powers providing a refreshing twist and extra dimension of depth. The card interactions are clever and players will need to leverage them within the current game state to succeed. With each player having access to the same cards, the first couple of rounds are swingy in the sense that you do not really know what your opponent is going to play. 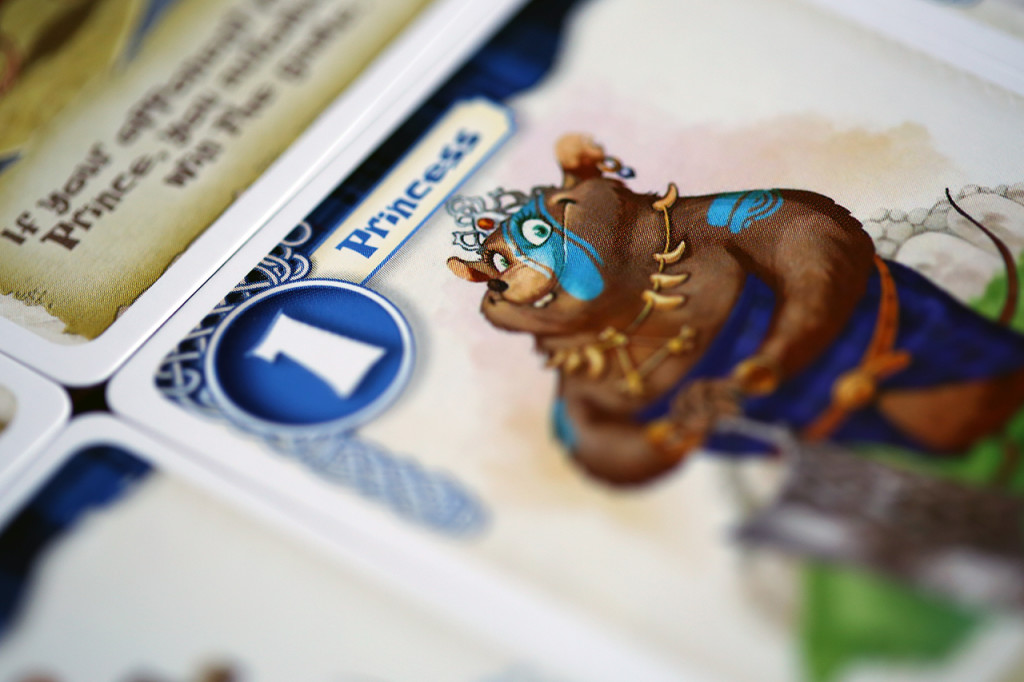 The real strategy of BraveRats comes into play once the first few cards have been played and you can then begin to deduce what your opponent’s best play is based on the cards and powers he has remaining. He’s played his Princess to try and catch me off guard early, is now the time to play my Prince?Or do I try and put this round on hold so that I can play my Prince next round and double-up? Decisions, decisions!

The simplicity of this game may turn some people off. It is certainly not a game that will be played consecutively for any great length of time. The fact that it is only a 2-player game may also hinder your ability to get this to the table as there are a number of other light filler games that accommodate more players.

Taught in two minutes and played in three minutes, BraveRats does not overstay its welcome. And don’t let the Blue Orange Games logo fool you; this game is accessible to a breadth of ages and gamer types.

Seiji Kanai has quickly made his way onto my “instabuy” list. I am infatuated with his ability to use minimal cards/components to create light, accessible filler games that casual and hardcore gamers alike will enjoy. BraveRats was a particular hit with my brother and me on our vacation in France recently. We pulled it out on the plane and couldn’t put it down. The short gameplay as well as the minimal setup and table space required made it the perfect game to stick in our backpack and pull out when we were at the beach or stopped for a drink at the café.

I love analyzing my opponent and calculating which card they may or may not play next. From that I can determine my best move or perhaps the move they were not expecting. There is a slight level of tension built up as the rounds go on, especially when there are cards on hold and this round could crucially swing the game in favor of one player, or even win it. My one small complaint is that this is only a 2-player game. After playing with the same opponent over and over you begin to establish a small meta and it can become predictable.

For players looking for a unique, short, portable filler game to exercise a bit of your brain and maybe even make your opponent say a few four-letter words, BraveRats would make a great addition to your collection.

My experience with BraveRats happened over lunch break at work with Biff. He was able to teach me how to play in one minute and our first game was completed in five. It was very easy to pick up quickly and figure out the strategy without much trial and error. I really would like to try the variants for this game. These variants add a welcomed variety for additional replay value and keeps it fresh if you’re playing an opponent in a few consecutive games. This is the perfect game for situations where you are sitting around waiting for your order at a restaurant or waiting for friends to show up for game night. You can just whip out BraveRats, teach it really quick, and by the time your meal comes, you have already played three games. If you like Love Letter, you will like BraveRats.

As I said in my 1st Impressions blog, BraveRats is not a game you really play to win, but rather just to enjoy a little friendly competition. It’s not designed to replace games with loads of strategy, but it does require a bit of thinking to outwit your opponent. Just don’t overthink it! One aspect that stood out was the great sense of balance among the cards. Rarely, if at all, did I feel defeated and unable to come back for a victory as there’s options to put rounds on hold and dodge a bullet. It’s likely impossible to play just a single game of BraveRats and if you find yourself playing the same person over several rounds, it can become familiar. But because of the level playing field it still manages to be entertaining and your opponents can still surprise you from time to time.